Picking Apart Stack Overflow; What Bugs Developers The Most?

Stack Overflow has been swooping to the rescue of all types of developers since its founding in 2008. Since that time, developers have asked millions upon millions of different questions, within all areas of development.


But what are the kinds of problems developers are forced to turn to Stack Overflow for?


We picked 11 of the most popular programming languages (measured by frequency of Stack Overflow tags) and ran a study looking to uncover some of the commonalities and differences within these questions.


But before we get there, let’s take a zoomed-out look at the 11 languages we’ve selected, as shown below. 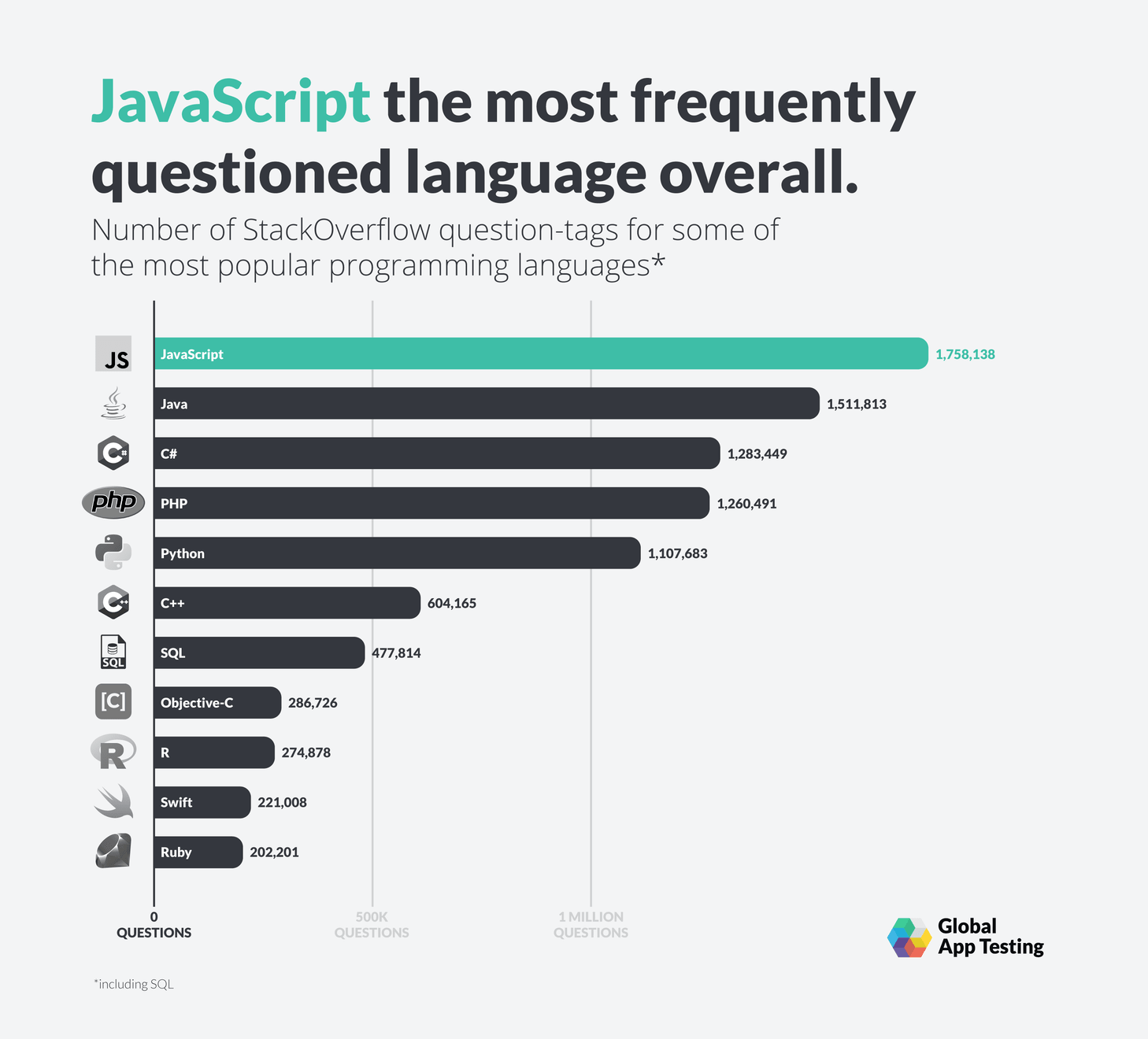 In terms of raw volume of questions asked, JavaScript has been the most frequently asked about since Stack Overflow was founded. This is likely due to JavaScripts ubiquity amongst a huge range of different applications and services: if you work in any way with the internet, chances are you’ll need to know a bit of JavaScript.

But while JavaScript may be top overall, when we split the data out across time we see a new crown is needed. 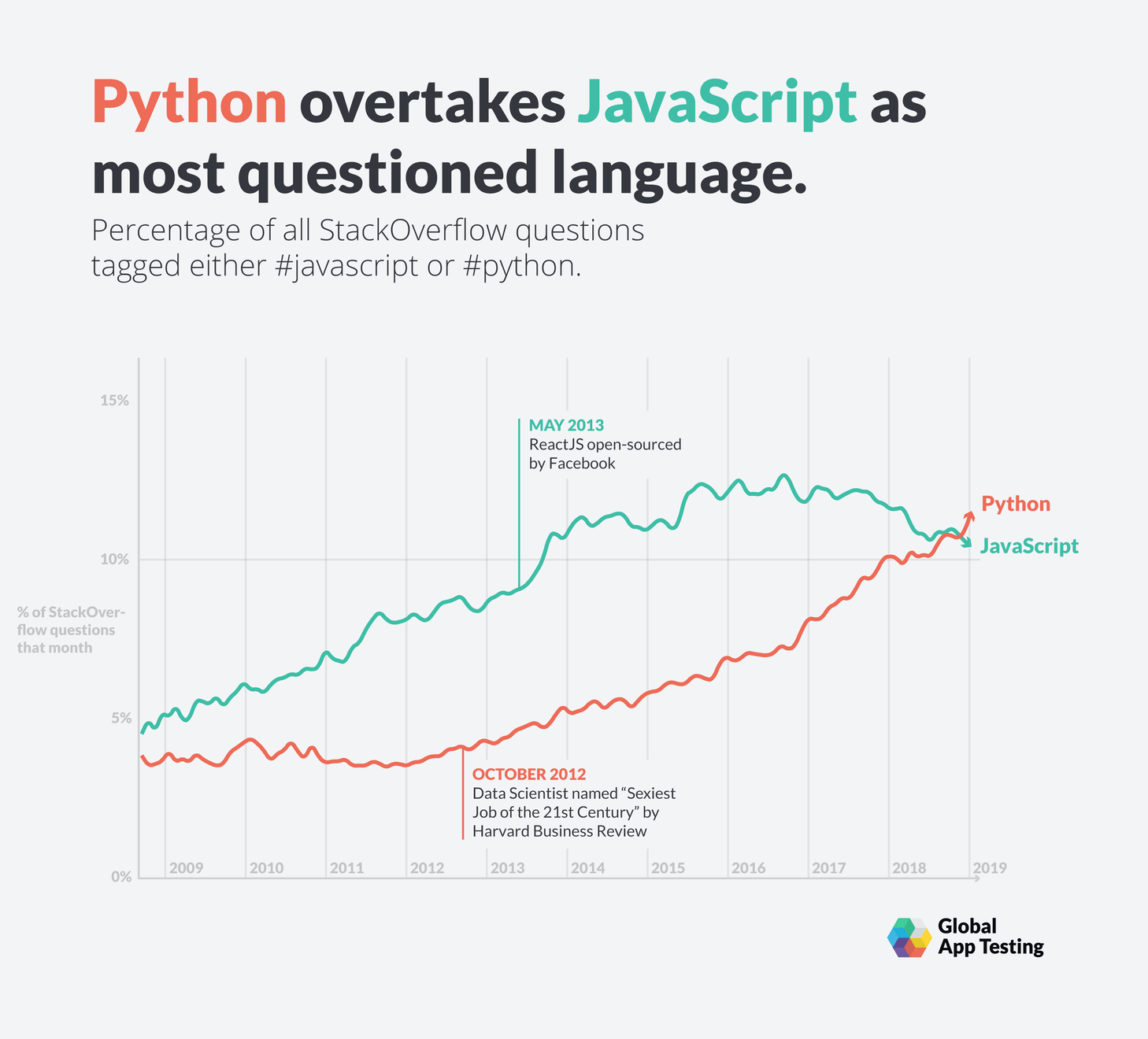 In 2011 Harvard Business Review labelled Data Scientist as the “Sexiest Job of the 21st Century”. Since then, Python - one of the go-to-languages of data scientists - has been ever-growing in popularity… so much so that going into 2019 it has dethroned JavaScript as StackOverflows most questioned programming language.

(Either Python is fast becoming the most popular programming language,  or Python just has a bigger proportion of new coders compared to other languages!)

But what exactly are these developers asking about? What are the most questioned frameworks, packages, functions, and methods? Which data types cause the most pain? And how different are these problems across languages?

Here are the results. 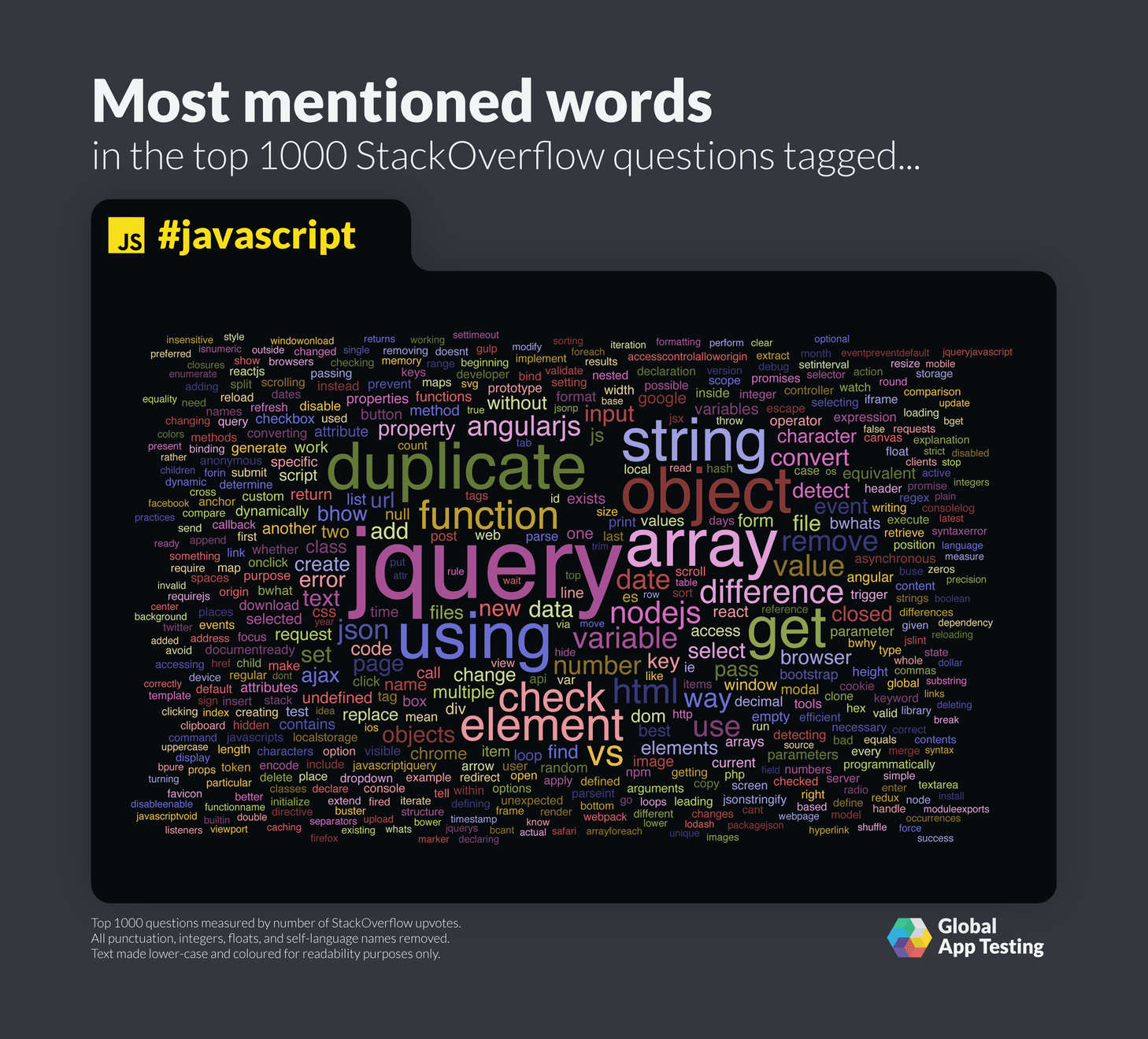 JavaScript has been around for 23 years; Stack Overflow for 11. And in those 11 years, “jquery” (center-left) was by far the most frequently questioned JavaScript framework. 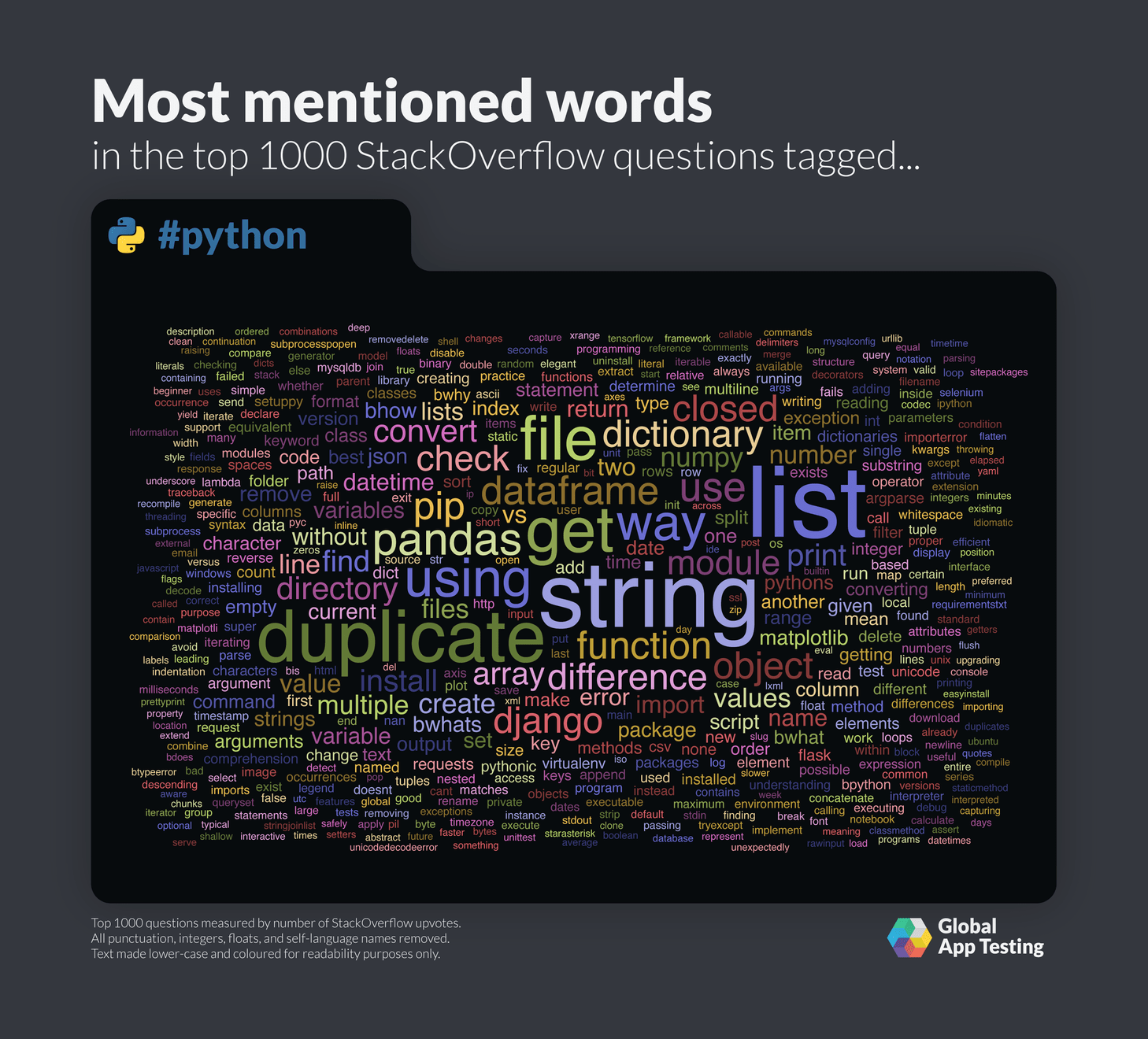 Python is actually about 6 years older than JavaScript. First appearing in 1990, Guido van Rossum’s brainchild has morphed into one the languages of choice for data scientists. Naturally, some of its most frequent pain points connect to data processing libraries: “pandas” (centre-left) and “dataframe” (center-top) being among them.

However, Python is a general purpose duct-tape language and gets involved in many different domains of tech, explaining the relatively frequently questioned “django” (center-bottom) web development framework. 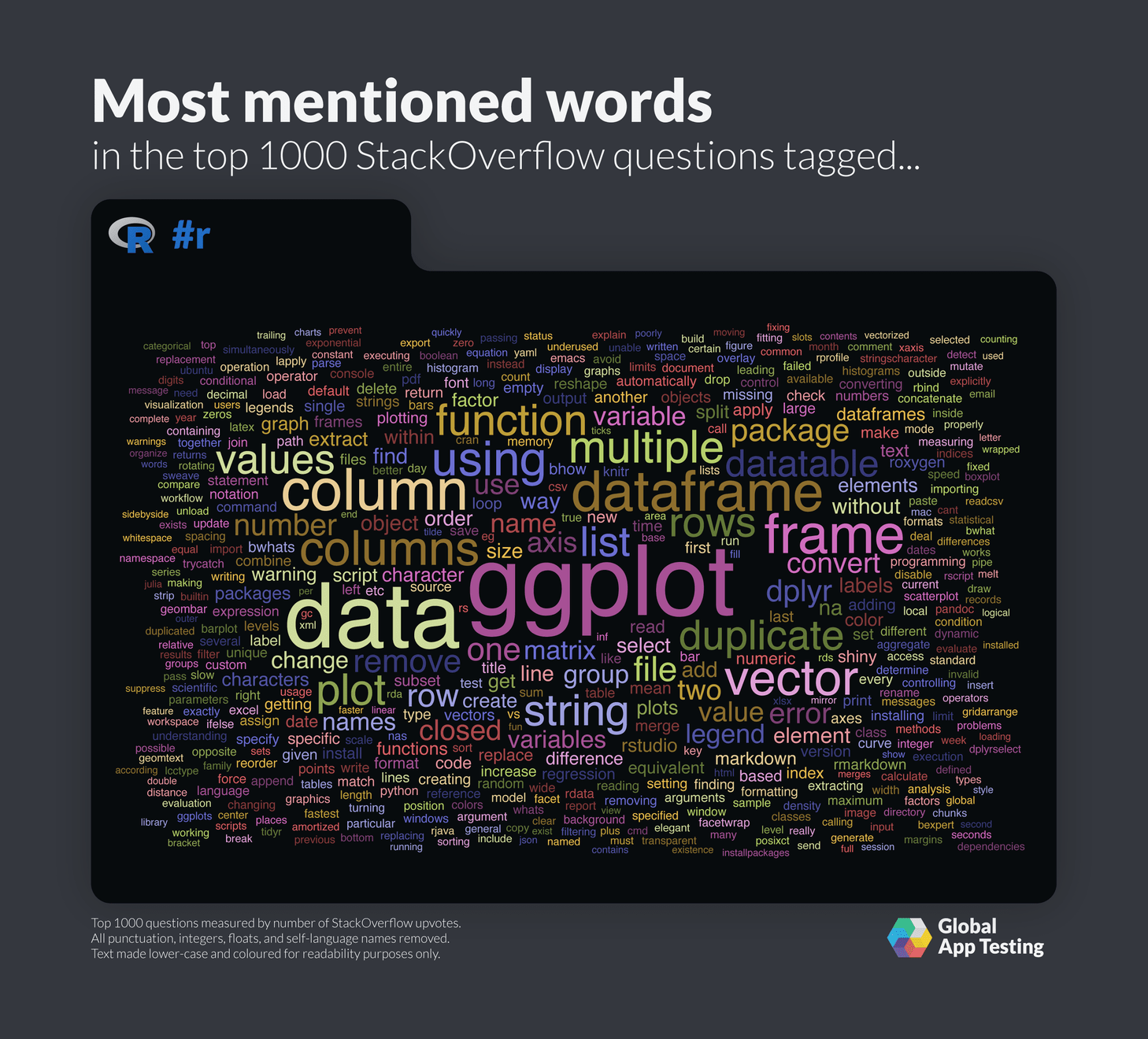 Perhaps the second language of choice for data scientists, R differs from Python in that it is almost exclusively used for that purpose. Data processing specific concepts such as “dataframe” (top-right), “datatable” (top-right) and “matrix” (center) seem to be causing R users some headaches.

So perhaps Python users are finding matplotlib easier to handle! 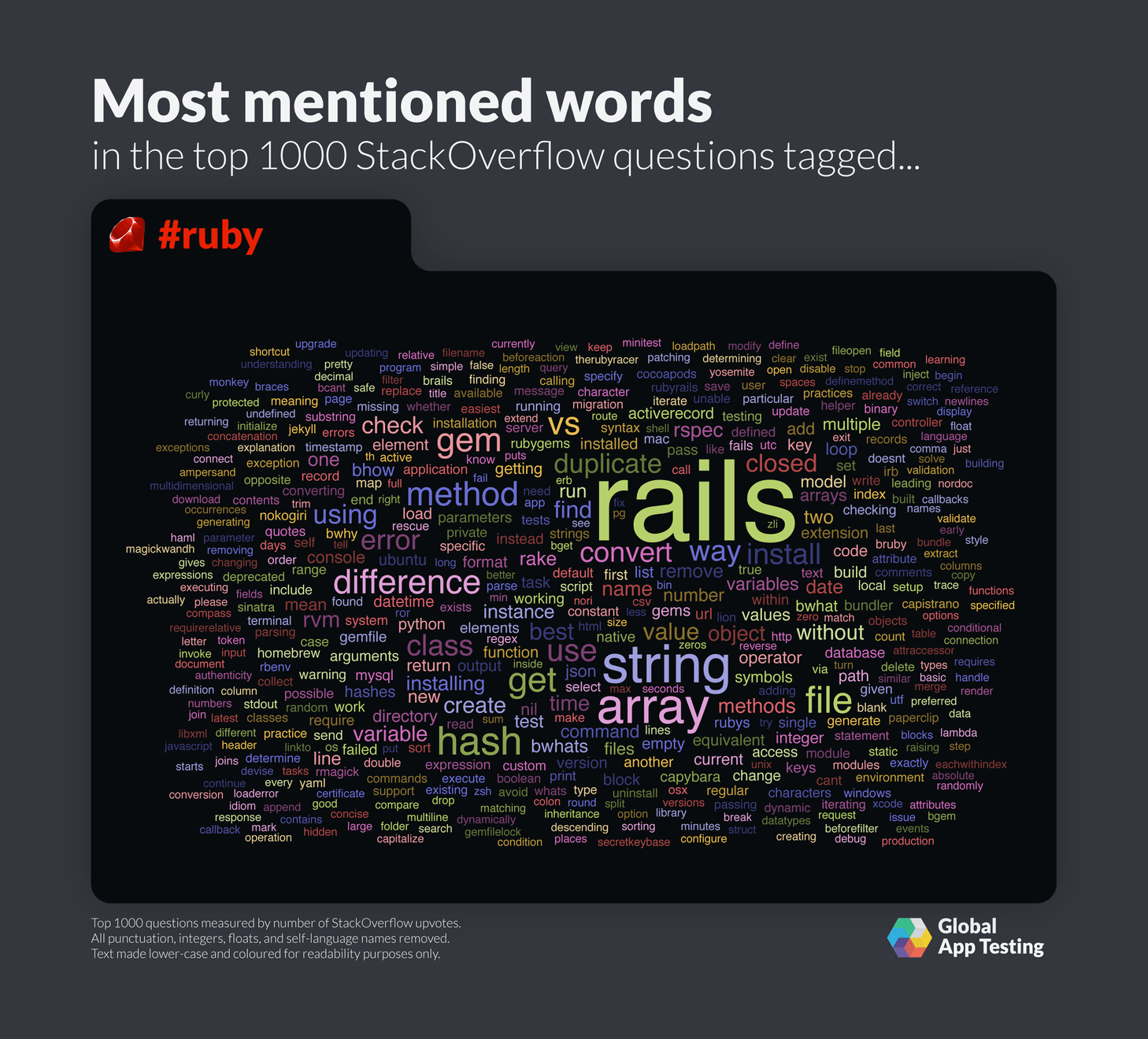 First appearing in the mid-90s, Ruby has now found a home as the server-side framework ruby-on-“rails” (top-right). 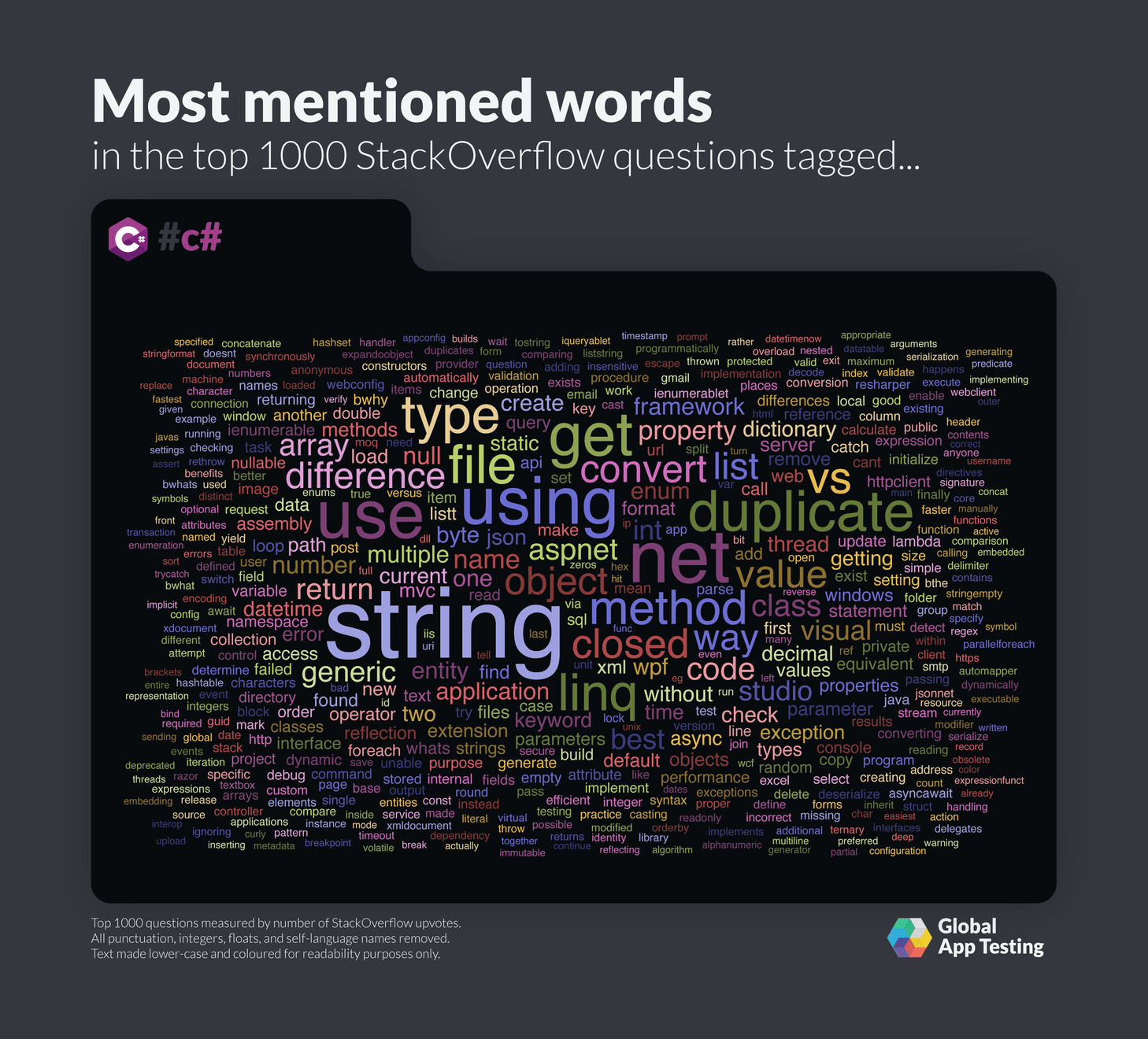 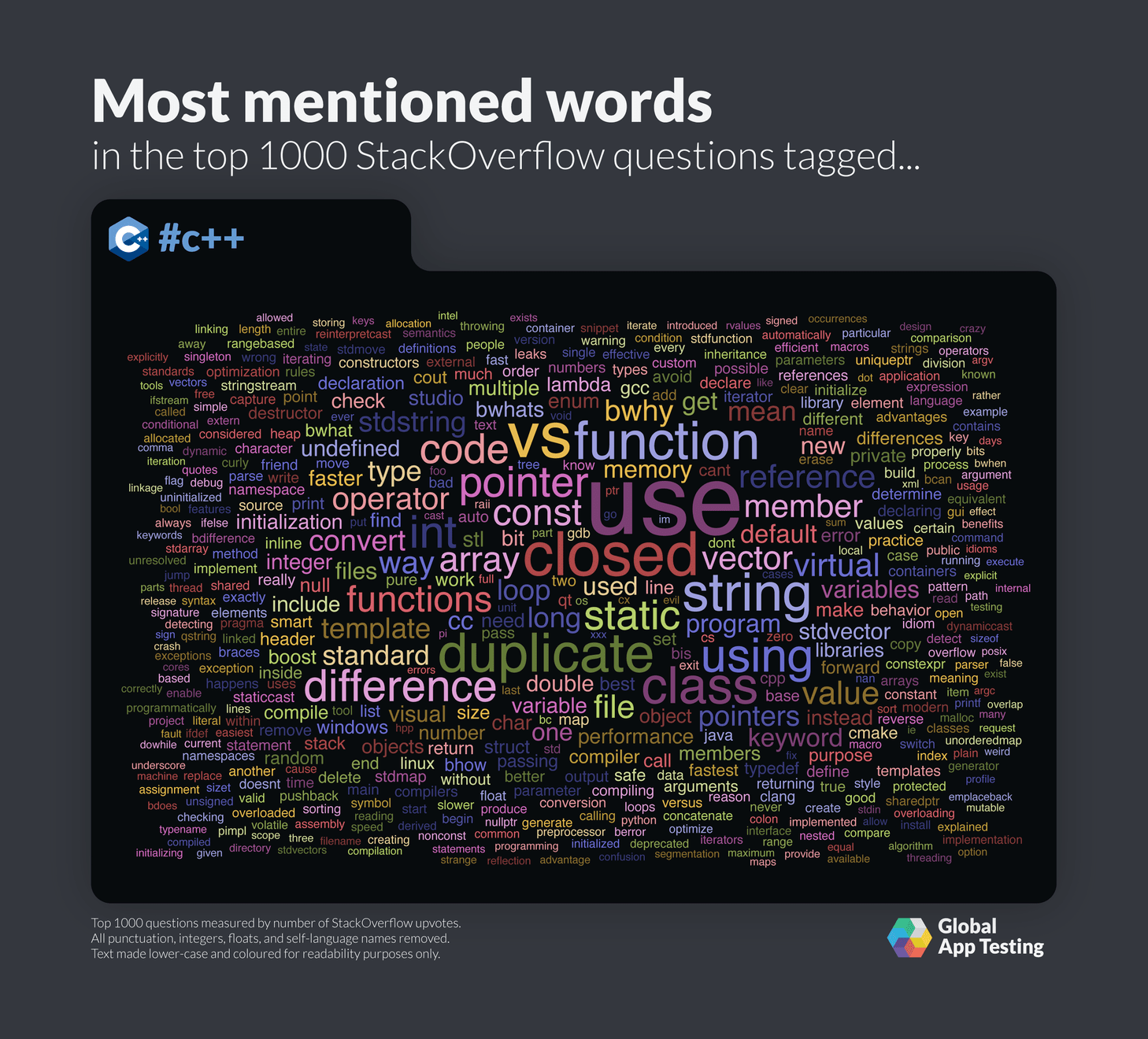 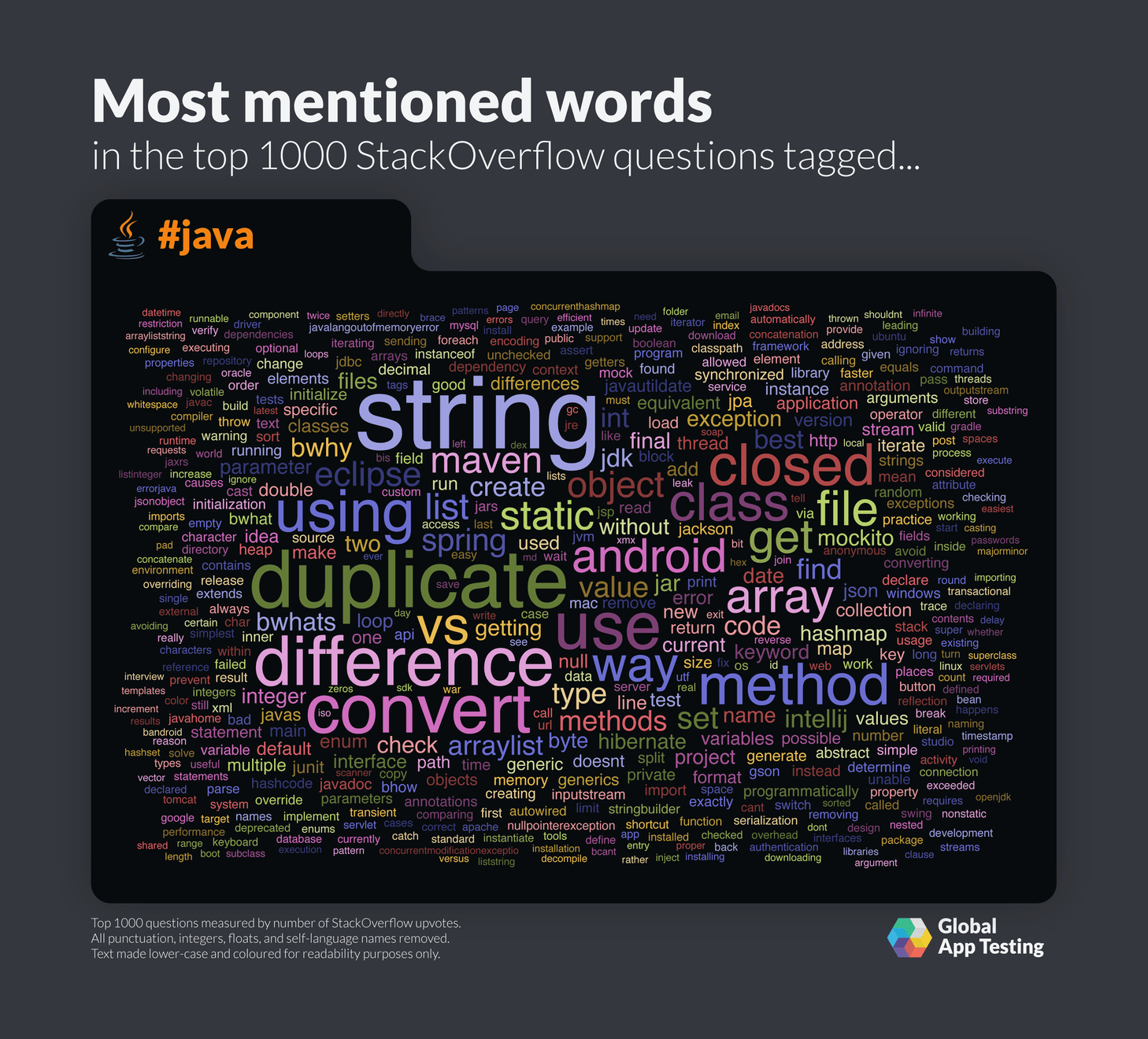 Java (1995) was created as a general purpose “write-once-run-anywhere” language. It became popular during the PC boom of the late 90s and the early days of the world wide web and was the driving force behind many Windows applications. 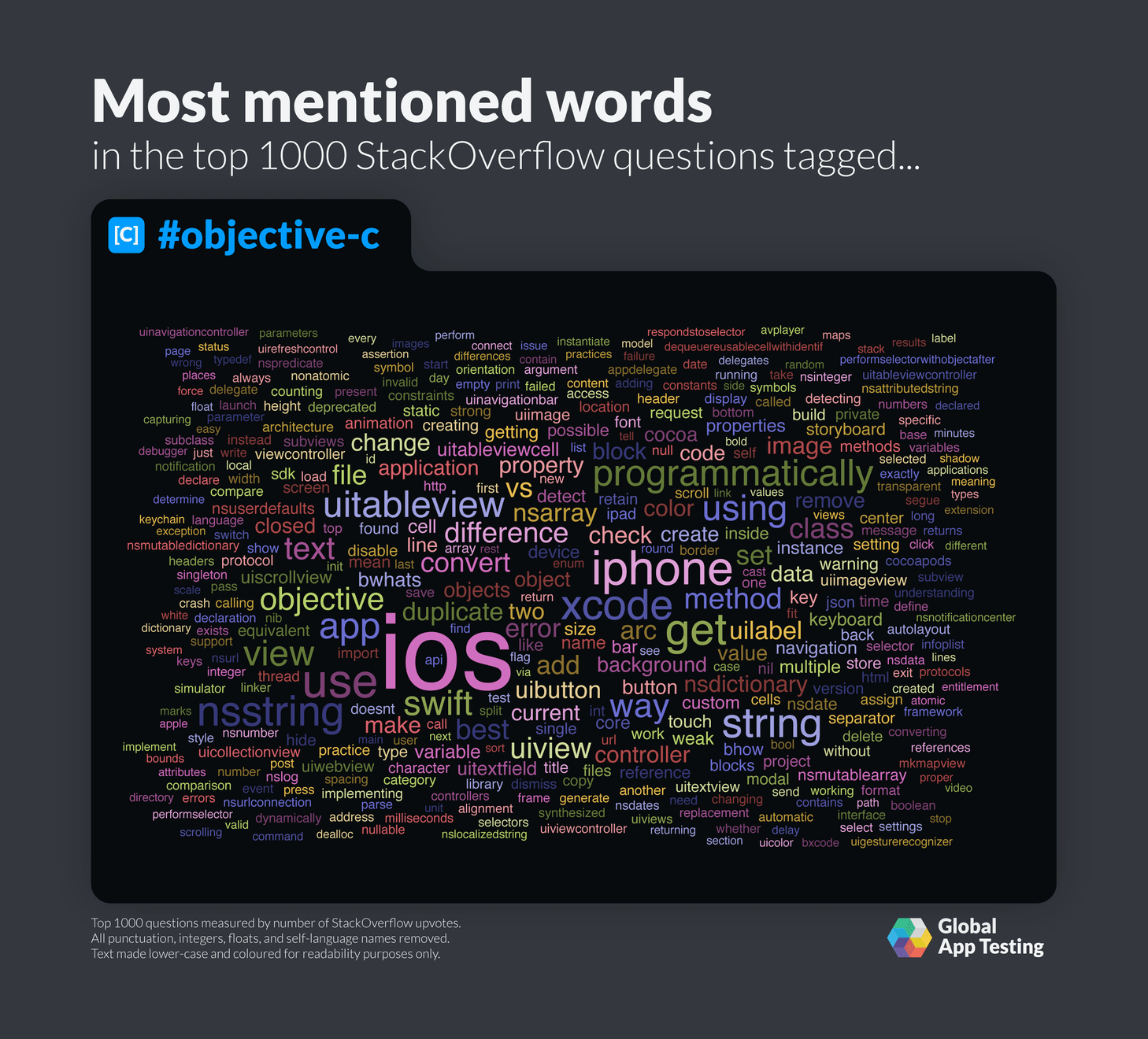 The most ancient language of the ones in this study, Objective-C (1984) was the predominant language supported by Apple for the OSX operating system, and more recently, for “iOS” (bottom-left) apps on the “iPhone” (center)... that is, until the introduction of Swift. 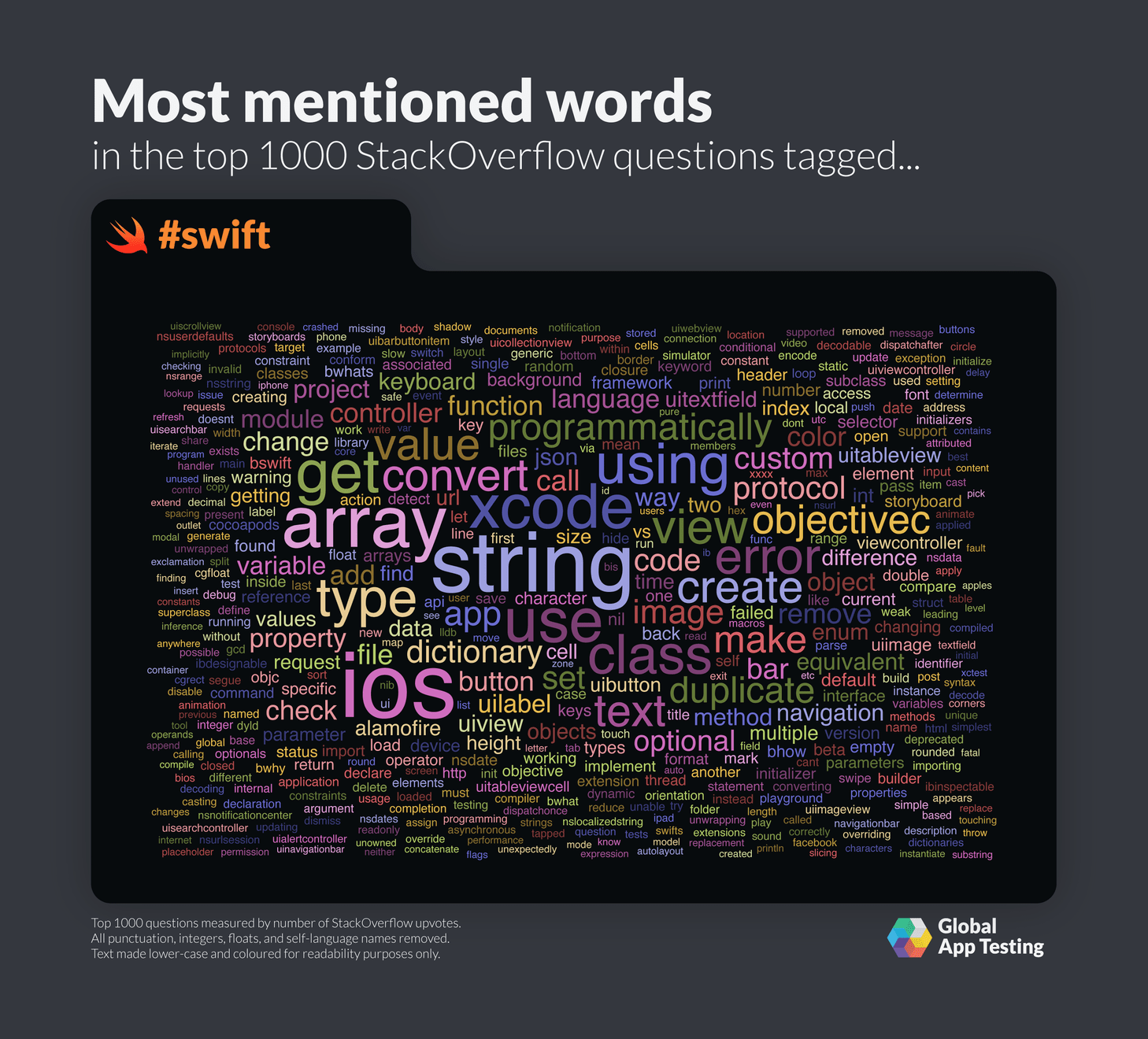 First appearing in 2014, Swift has superseded Objective-C in the Apple development sphere. Though perhaps the frequency of “objective-c” mentions (middle-right) in Stack Overflow questions tagged #swift represent the thousands of iOS developers looking to Stack Overflow to update their knowledge.

PHP (1995) was designed as a server-side scripting language used for web development. It’s still used for that purpose today, and you can see evidence of this in the frequency of questions surrounding the languages “laravel” framework (center-left). 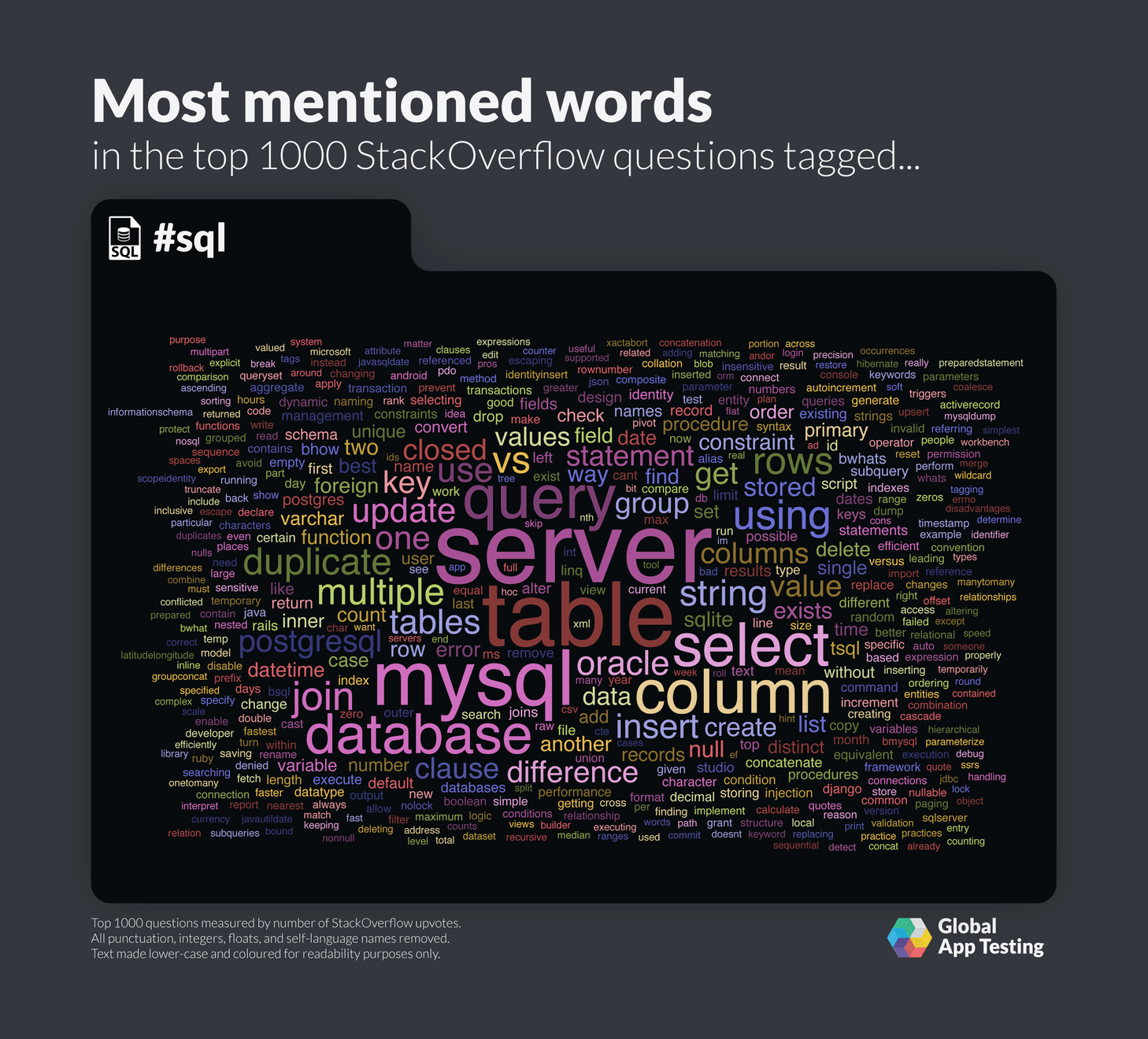 SQL isn’t a fully featured programming language like some others in this study; it’s designed specifically for one job: data manipulation. Due to this specificity, the most common pain points for SQL are all around database access: “sever”, “mysql”, “database”, “query”, “select”.

Each programming language has over time been geared toward - or was even designed for - a particular niche within tech. R is to data science as Swift is to iOS development as C++ is to video game development. This explains some of the differences in the types of problems that arise. This explains why we see “database” a commonly questioned concept in SQL but not, for example, Objective-C.

Despite these obvious differences, these visualisations represent some fundamental similarities within the different domains. Base-level data types such as strings and arrays (but not integers, floats, or boolean values, apparently) are frequent pain points that cause developers of all stripes and creeds to turn to - keyboard-under-hand - to Stack Overflow.

And in the spirit of unity, here’s a word cloud for all 11,000 of the questions we extracted: 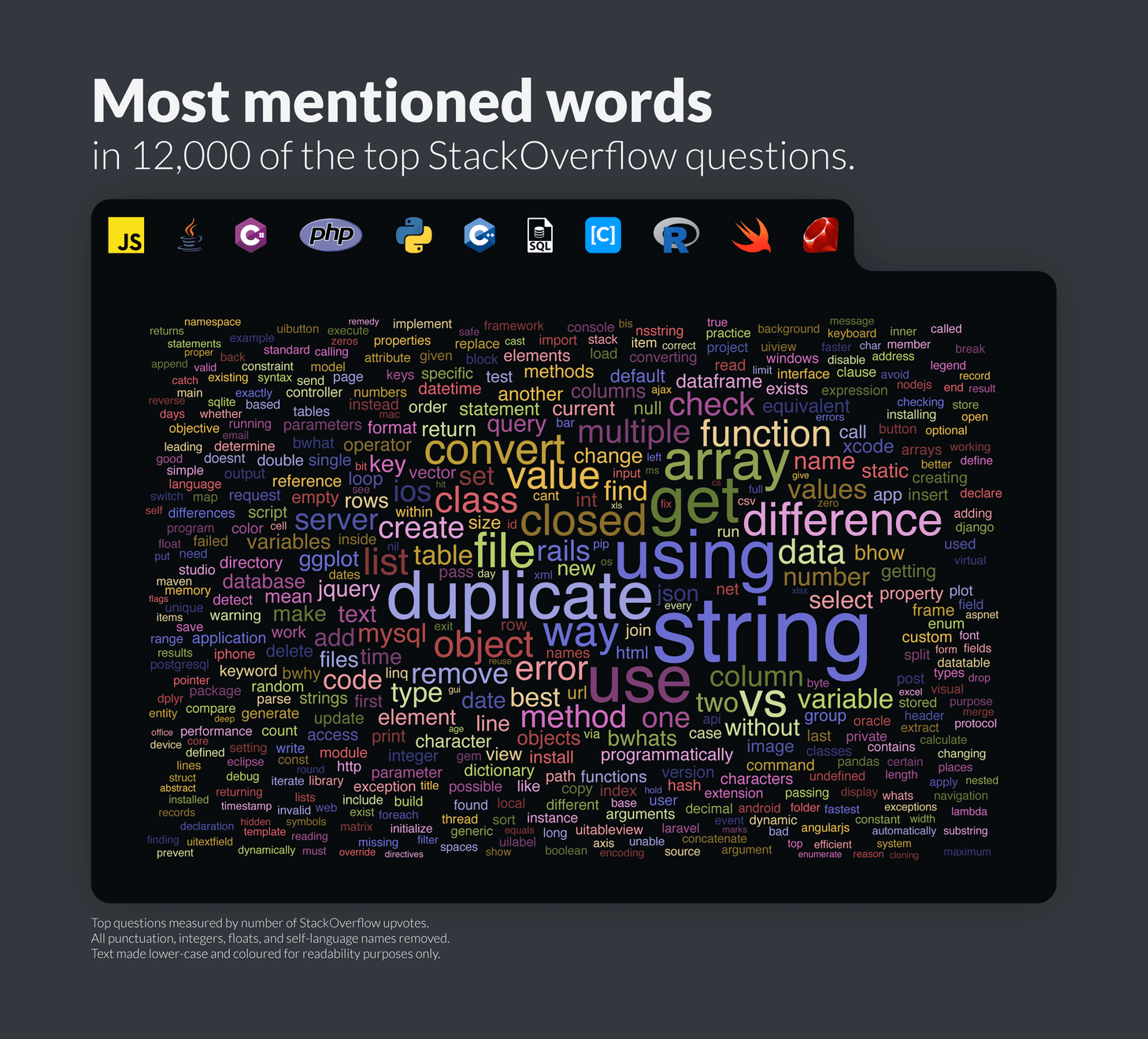 Google can help with some questions...

...but for everything else, there’s Stack Overflow.