The earliest memory I had of arcade video games was watching my older brother and cousins going at the video game machines at Genting Highlands. While our parents were at the other types of games Genting Highlands was more popularly known for, we were generally let loose to play arcade games to our hearts’ content.

Those were the magical days of Pac-Man, Space Invaders, Galaxian, Donkey Kong, Frogger, Centipede and many, many more. Days of blinking lights, intense music, frantic tugs at the joystick, furious mashing of the buttons then the groans of dismay as the last life was lost.

As with many aspiring programmers starting out, one of my secret dreams was always to recreate that magic, to write the next big game. And as with many as well programmers, I failed many times miserably. Even though eventually I succeeded in writing some simple games, I came to realise that even seemingly simple games are in fact not easy to write.

Of course that didn’t stop me from trying my hand at it once again. This time round I tried the grand old dame of arcade video games – Space Invaders. 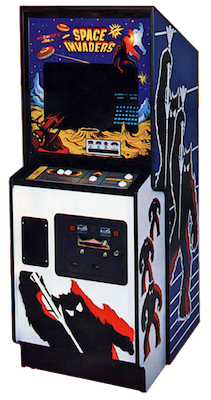 The premise of the game, in case you’re not already familiar, is quite simple. As the player you control a laser cannon to battle rows of alien invaders. The laser cannon can only move horizontally across the bottom of the screen as the aliens move back and forth, and slowly descending upon you. The aliens try to destroy you by dropping torpedos at you, while you are partially protected by a few stationary defending bunkers. The game ends if the aliens reach the cannon or all your cannons are destroyed.

As I said, simple.

Most game development uses some sort of game engine or at least a graphics engine, but the game I wrote uses neither. Instead what I tried to do is to build a game by creating individual frames and displaying them rapidly one after another. Essentially, this is a variation of the flocking simulation I wrote earlier.

The idea is quite straightforward – a while back I stumbled on a hack in iTerm2 that allows me to display images on the screen and that led me, one thing to another, displaying a number of images one after another, resulting in an animation.

Which, if you think about it, is what a simple game like Space Invaders is all about – an animation that can be controlled by a user.

Let’s look at the code.

In computer graphics, sprites are independent objects that are added on to a background. Sprites were, not unexpectedly, first used in arcade video games and were often generated by hardware. In our case, we’re using a simple but popular technique of using a single sprite sheet and taking various parts of the sprite sheet to be a separate sprite. 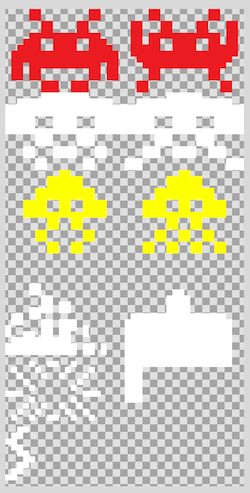 The image above is a magnified version of the sprites.png sprite sheet file.

Each sprite is represented by an image.Rectangle position of the corresponding sprite image in the sprites.png file. For example, the alien1Sprite shows a Rectangle with the upper left position of (0,0) and the lower right position of (20,14). 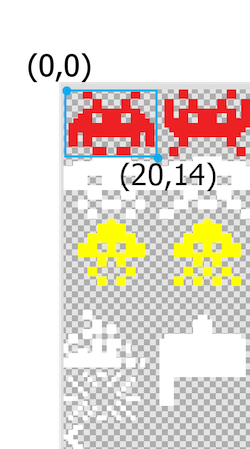 We’ll see how this is being used in a short while.

We also see that we load up the 2 image files sprites.png and bg.png. This function simply gets an image.Image from an image file.

Now that we have the positions of the sprites, let’s see the Sprite struct itself.

The sprites are represented by:

Let’s look at the definition of different sprites in the game.

This is a simplified version of Space Invaders, so we only have 4 types of sprites – aliens, the bombs the aliens drop, the laser cannon, and the laser beam that shoots out of the cannon. The variable aliens is an array of alien sprites, bombs is an array of bombs dropped while laserCannon is the laser cannon sprite and beam is the laser beam sprite. As you can see from the code, the filter crops the part of the sprite sheet according to the defined Rectangle earlier.

We’re not creating the aliens yet here, but we’ll need to in a while, which we will be using a function:

We wil be passing the Rectangles to the function to create the correct alien sprite and it’s alternate form (for animating the sprite) but all aliens explode the same way. Bombs are created in the game loop itself and we’ll see it later.

So much for the sprites, let’s look at the main function of the game.

This is a game that starts from the terminal, and the whole game is animated on the terminal. Therefore, controlling the terminal is very important. I used the popular termbox-go library to give me this control. Termbox, as with the GIFT library, is probably an overkill since it’s a much more powerful library than is needed here.

I start off the main function by initializing termbox-go. The game actually has 2 independent loops:

This means there are 2 concurrently running threads, and in this case, goroutines.

We start a separate goroutine that polls for events and stuffs them into a buffered channel. We’re using a liberally large buffer here, it can really be smaller, but the larger the buffer, the relatively smoother the event captures are so I didn’t really try to figure out the optimal size.

Most games have a start screen, where you are asked to place credits to press a button to begin. We have one too.

We’re polling the keyboard again, and we’re waiting for some to either press the s or S to begin the game, or q to quit the game.

Next, we populate the aliens array. This is pretty straightforward, we simply want 3 rows of different aliens.

Now that we’ve laid the groundwork, let’s get into the main game loop. Most games run in a what is commonly called a game loop. A game loop is a game software development pattern that is often the heart of a game. It’s an infinite loop that updates and redraws to animate gameplay. In our Space Invaders game loop we use a variable named gameOver to indicate that the loop should continue until the game ends (either triggered by the player or when the aliens win).

The game loop is rather long so we’ll break it up into a few parts. Let’s look at the first part, which is used to capture the keyboard events from the player.

Whenever the events buffered channel has something, it will be received into the ev variable where we try to determine what kind of event it is. Pressing Ctrl-Q ends the game, while pressing the space bar fires a laser beam. Pressing the left or right arrow buttons move the laser cannon left or right accordingly.

You might notice that we have to have a default in the select. This is because if we don’t have the default, the select will block, and the loop can only proceed whenever the user presses a key!

Next, we’ll draw the laser cannon and alien sprites. We start off with an empty image and drawing the background on to it.

We start off with the aliens first.

To determine where the aliens should be going, we multiply the horizontal (X) position of the alien with the variable alienDirection.

We also use the Status of the alien to determine if it’s alive or dead. If it’s alive, we check if it has collided with a laser beam. If yes, it’s dead. We draw the explosion sprite, set the Status to false, rack up the player points and reset the laser beam. Reseting the laser beam just means we set the beam’s Status back to false and place it at the vertical (Y) level the same as the cannon.

If the alien didn’t collide with the laser beam, we display either the normal sprite or the alternate sprite. This gives us the animation of a moving alien.

Let’s take a quick look at the collision physics, which is concentrated in the collide() function.

Give the two sprites are boxed within the two rectangles, the sprites are considered to have collided if all these conditions are met: 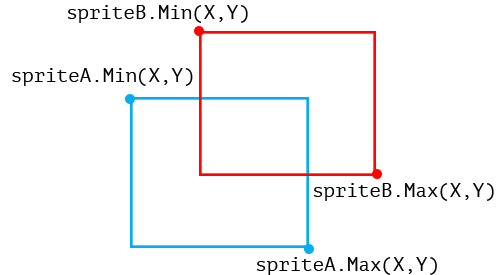 The aliens drop bombs as they descend on the laser cannon. Obviously we don’t want it to drop bombs continually, so we use a probability to determine if the bomb should be dropped or not.

Dropping a bomb here means we create a new Bomb sprite and set it to start at where the alien is located, then adding it to the array of bombs.

Now that we have drawn the aliens (or its death by explosion), we check if it has moved outside of the window. It it has, we reverse the direction and move the aliens down.

We also need to move the bombs downwards on its deadly descend, according to the bombSpeed.

As the bombs drop, we need to check if it collides with the laser cannon. If it did, it’s game over, and we draw the exploding cannon sprite.

That’s it for the aliens and their bombs in the game loop. Let’s look at the laser cannon and its laser beam next.

The laser cannon is relatively simple. We continue drawing the cannon as long as it’s not been destroyed.

As for the laser beam, since there is only one variable to represent it you’d probably realise that the cannon can only shoot one laser beam at a time. This is mostly for simplicity’s sake.

We use the beamShot variable to determine if the player has pressed the space bar, and therefore shot the laser cannon.

If yes, we place the beam at the tip of the laser cannon, set the beam’s Status to true to indicate that the beam is in action and we should show it, then set beamShot back to false.

We need to check the beam’s Status and if it’s in action, we draw it and then move it up. If the beam’s position is outside the window, we reset the beam again.

Just before we end the game loop, we print the image to the screen, print the score and increment the loop.

So how exactly do we print the image on the screen? This is done through a simple hack on ITerm2 (so this only works on iTerm2, sorry!)

And that’s it! All in all, including comments, the code is less than 300 lines. If it seems pretty short, you should remember the original entire compiled binary ROM for the game is less than 110kb in size, including images and music! And mine is a simpler clone without the full game features (multiple lives, defender bunkers, ufo etc) and also includes 2 external libraries.

This is how it looks on my computer. How does it look on yours?

The code for this is all here in this GitHub repository.