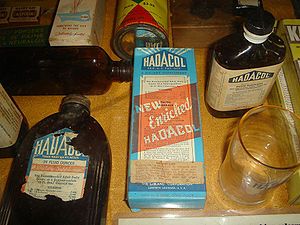 Hadacol was a patent medicine marketed as a vitamin supplement. Its principal attraction, however, was that it contained 12 percent alcohol (listed on the tonic bottle's label as a "preservative"), which made it quite popular in the dry counties of the southern United States. It was the product of four-term Louisiana State Senator Dudley J. LeBlanc, a Democrat from Erath in Vermilion Parish in southwestern Louisiana. He was not a medical doctor, nor a registered pharmacist, but had a strong talent for self-promotion. Time magazine once described him as "a stem-winding salesman who knows every razzle-dazzle switch in the pitchman's trade".[1]

In 1943, LeBlanc conceived the idea that became "Hadacol" in New Orleans, when he had persistent pain in his foot and elsewhere. He asked a doctor to give him medication for pain: then he found that what the doctor gave him was a B-vitamin elixir, which he proposed to duplicate with a few changes and sell to a mass consumer market. (Years later, reports arose saying that LeBlanc had offered the doctor a share of the business, but the medical man refused. On a return visit, LeBlanc allegedly took a bottle with a few drops remaining of the medicine when the nurse had left the room.)[2] LeBlanc said that his research showed that multivitamins taken collectively would yield greater results than a single vitamin for a specific problem.

The label on the tonic's bottle clearly stated that the recommended dosage (1 tablespoonful taken 4 times a day) was to be taken "...in a 1/2 glass of water after meals and before retiring". However, some pharmacies in dry counties were known to sell it by the shot-glass and at least one bar in New Orleans' French Quarter was known to sell a "Tassel Cocktail" with Hadacol as an ingredient.[3] In Northbrook, Illinois, a suburb of Chicago, sales of Hadacol were limited to liquor stores.[4] 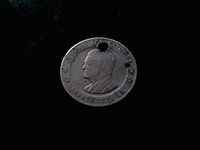 Front of a 1948 Hadacol 25¢ token. LeBlanc's picture is center. Top says, "LEBLANC LABORATORIES". Bottom says, "LAFAYETTE, LA." The hole punched in it at the top was done at the time of redemption. Click to view large size 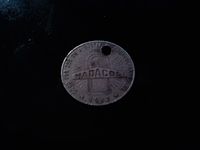 Back of a 1948 Hadacol 25¢ token. The center image is a Hadacol bottle with a "HADACOL" banner across it. Top says, "GOOD FOR 25¢ ON A BOTTLE OF HADACOL ANYWHERE". Bottom says, "1948". The hole punched in it at the top was done at the time of redemption. Click to view large size.

LeBlanc created the name "Hadacol" from his former business, the Happy Day Company, maker of Happy Day Headache Powders (which the Food and Drug Administration, or FDA, had seized) and Dixie Dew Cough Syrup. "Happy" became "HA", "Days" became "DA," "Company" became "CO", and his own last name "LeBlanc" provided the "L". Hence the created name was "Hadacol."[5][6] However, when LeBlanc was asked about the name, he would often joke, "Well, I hadda' call it something!"

A two-page advertisement for Hadacol appeared in the centerfold of the 1951 edition of Grier's Almanac, an annual publication marketed to farmers in the Southern USA. The ad's headline read (in very large type):

The ad continued with testimonials and a glowing plug for Senator LeBlanc, stressing the curative powers of Hadacol for a number of ailments "...due to lack of Vitamins B1, B2, Iron and Niacin". A capsule version of Hadacol was briefly produced, consisting solely of a B-Vitamin and mineral mixture.

LeBlanc promoted the tonic as a "Dietary Supplement" instead of a medicine, stating that it was "...formulated as an Aid to Nature in rebuilding the Pep, Strength and Energy of Buoyant Health when the System is deficient in the Vitamins and Minerals found in this Tonic..." But Time Magazine described it as "a murky brown liquid that tastes something like bilge water, and smells worse."[7]

The American Medical Association was likewise not as appreciative. In an official press release in 1951, the AMA stated, "It is hoped that no doctor will be uncritical enough to join in the promotion of Hadacol. It is difficult to imagine how one could do himself or his profession greater harm from the standpoint of the abuse of the trust of a patient suffering from any condition. Hadacol is not a specific medication. It is not even a specific preventive measure."[8]

LeBlanc flooded the airwaves with testimonials to the powers of the seemingly miraculous (yet foul tasting) brown liquid and turned the jingle called "Hadacol Boogie" into a popular recording. Promotional items included various fliers, signs and clocks, a "Captain Hadacol" comic book,[9] T-shirts, lipstick, an almanac, plastic thimbles printed with the Hadacol logo, water pistols and cowboy-style holsters, glasses used for taking the diluted mixture, and a stamped metal token redeemable for 25¢ towards the purchase of any bottle of Hadacol (LeBlanc brazenly placed his own portrait on the front of the token, and the trademarked logo on the back).[10] These items, along with the Hadacol bottles and the boxes they were packaged in, are now much sought-after items, and fetch high prices among collectors of Southern memorabilia and medical quackery.

In 1950, LeBlanc offered a handsome financial incentive to anyone who could provide him with a parrot that was trained to say "Polly wants Hadacol!" The parrot was to be exhibited at promotions. The offer included the following:

LeBlanc was an entrepreneur in other areas too, but it is Hadacol that made him famous outside Louisiana. For his "Hadacol Goodwill Caravan" touring shows (the last of the big-time "medicine shows"), LeBlanc brought in Hollywood celebrities, including such luminaries as Roy Acuff,[12] Milton Berle, Lucille Ball, Minnie Pearl, Connee Boswell, Mickey Rooney, Bob Hope, Cesar Romero, Dorothy Lamour, Carmen Miranda, George Burns and Gracie Allen, Judy Garland, Jack Dempsey, Chico Marx, Hank Williams and James Cagney to help him market the product. He also sponsored a separate touring show featuring notable Jazz and Blues musicians to attract black customers. Admission to the Hadacol gala was two Hadacol boxtops for adults, one for children. Considering that the 8 ounce bottle cost $1.25 and the "family size" 24 ounce bottle cost $3.50 each during the late 1940s, this was not cheap (Adjusted for inflation, the prices would be around $10 and $30 in 2007). Sales of the tonic at the shows were brisk.

According to musician Weldon "Big Bill" Lister, who performed in the Hadacol Caravan, "The only way you could get into that show was with a Hadacol boxtop, And believe me, we played to crowds of ten, twelve thousand people a night. Back in those days there wasn't many auditoriums that would hold that many people. We played ball parks, race tracks - you know anywhere where they had enough big bleachers to handle those kind of crowds." The final show was on 17 September 1951.[13] Paul Schrader wrote a script entitled Eight Scenes from the Life of Hank Williams, which has not yet been produced. It includes a sequence on his performances with the Hadacol Caravan.[14]

In a 15-month period ending in March 1951, LeBlanc sold more than $3,600,000 worth of the tonic. In another six months, after LeBlanc sold his interest of the LeBlanc Corporation (Hadacol's parent company) to investors for $8,200,000,[15][16] the enterprise collapsed under the weight of debtors. It was discovered all too late that LeBlanc was spending more for advertising by that point than he was taking in as receipts (turning its $3,600,000 profit into a $1,800,000 second-quarter loss), had concealed both $2,000,000 in unpaid bills and a $656,151 tax debt, and another $2,000,000, listed in the ledgers as "Accounts Receivable", were cases of the tonic out on consignment, much of which was being shipped back. In an official court statement, the Federal Trade Commission stated that the publicity behind the tonic was "false, misleading and deceptive" in representing the nostrum as "an effective treatment and cure for scores of ailments and diseases."[17] The ensuing bad publicity played a contributing factor to LeBlanc losing a gubernatorial election in 1952 and effectively halting his future statewide electoral chances.

Martin Gardner's In the Name of Science (1952) mentions an interview that LeBlanc gave on Groucho Marx's radio program: When Groucho asked him what Hadacol was good for, LeBlanc gave an answer of startling honesty. "It was good," the senator said, "for five million dollars for me last year." In 1954, after the Hadacol fiasco, LeBlanc tried to re-enter the patent medicine market with a lemon flavored non-alcoholic vitamin tonic named "Kary-On".[18] Unlike Hadacol, it quickly vanished from production.

According to the United States Patent and Trademark Office, there were two attempts to revive Hadacol. The first was in 1987 by Edmondson Enterprises of Shreveport, Louisiana.[19] The second attempt was in 1997 by Au Pharmaceuticals of Tyler, Texas.[20] Both attempts to revive the brand were unsuccessful. In 1976, "Hadacol" Multi-vitamins were distributed by the Atlanta, Georgia based "Hadacol Corporation" in an unsuccessful attempt to revive the brand name.