8 - 10 minutes
I’ve been using Mac laptops for a long time, going back to the very first portable Apple ever made, so I was really excited when Apple sent me a new MacBook Pro to test and review. This 15” space gray MacBook Pro looks just like the 2016 model I purchased about 18 months ago, but on the inside it has some big changes. My test unit came equipped with a 2.9 GHz Intel i9 processor with 6-cores (a Core i9-8950HK to be specific, part of Intel’s Coffee Lake family), 32 GB of 2400 MHz DDR4 memory, an AMD Radeon Pro 560X discrete GPU with 4096 MB (low power graphics are handled by an Intel UHD 630 integrated GPU with 1536 MB), and a 4TB SSD. The 2.9 GHz CPU can turbo boost to 3.6 GHz, and if that’s not enough for you, it can also “thermal velocity boost” to as high as 4.8 GHz, load and temperature permitting. 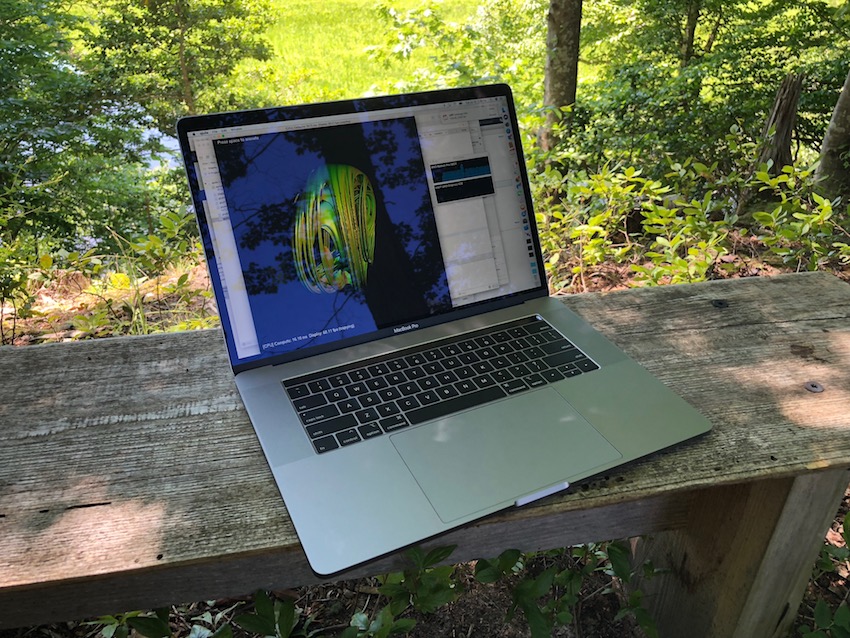 The display on the new MacBook Pro is a 15.4” Retina display with 2880x1800 resolution, just like my old model, but the new MacBook Pro has a True Tone adaptive display (controlled by a new Apple T2 chip, which also handles chores like encrypted storage and booting, Hey Siri, and all the duties of the old T1 chip). The difference is quite stunning and may be reason enough to upgrade to this new model. Indoors, in rooms with warm lighting, the old screen makes whites look blue and harsh but the new screen is warm and easy on the eyes. Outdoors, it goes in the opposite direction and gives whites a natural daylight tint. It’s a great feature to have on a laptop that will be used for visually intensive work in a wide range of ambient lighting conditions. The keyboard on the new MacBook Pro looks familiar, but it’s a third generation butterfly keyboard with some noticeable improvements. Chief among them is noise, or lack of it. Whereas the old keyboard had a bit of clack to it, on both the down stroke and the up stroke, the new keyboard has a muted pop in both directions. In addition, lateral play is greatly reduced. Finger a key on the old keyboard and you can wiggle it. On the new keyboard, the keys are firmly centered. Overall, the new keyboard feels more precise and direct, but behaves much the same. Folks longing for more key travel (real or simulated) won’t find it, but if you liked the old keyboard you’ll like this new one even more.

When I reviewed the 2016 MacBook Pro, one thing I lamented was the 16 GB memory limitation, and thankfully that has been fixed -- the 2018 model now offers up to 32 GB. For my work in engineering and software development, this is a good amount of memory for a laptop (though I still like 64-128 GB on a desktop). While the 2018 MacBook Pro changed from low power LPDDR3 memory to more power-hungry DDR4 memory, increases in power consumption were offset with a slightly larger battery (now up to 83.6 watt-hour). Weight remains unchanged at right around 4 pounds.

At this point I’d like to turn to some benchmarks, since performance is a key factor in my work. As I have done in past reviews, I’ll be using computational fluid dynamics (CFD) simulations for basic benchmarks, as well as using results from a LINPACK benchmark. I’ll follow that up with some GPU benchmarking, and touch on the use of an eGPU.

First up, I’d like to look at single core performance by generating the surface mesh of an aircraft composed of 237,660 triangles. I’ll be comparing the 2018 MacBook Pro to 10-core and 18-core iMac Pros, as well as my old 2016 MacBook Pro. Here, we see the 2018 MacBook Pro coming in 29% faster than the 2016 model and just barely edging out both iMac Pros – truly impressive performance for a laptop. And with 32GB, the MacBook Pro will be capable of generating some fairly large meshes, addressing the chief limitation of my 2016 model for CFD use. 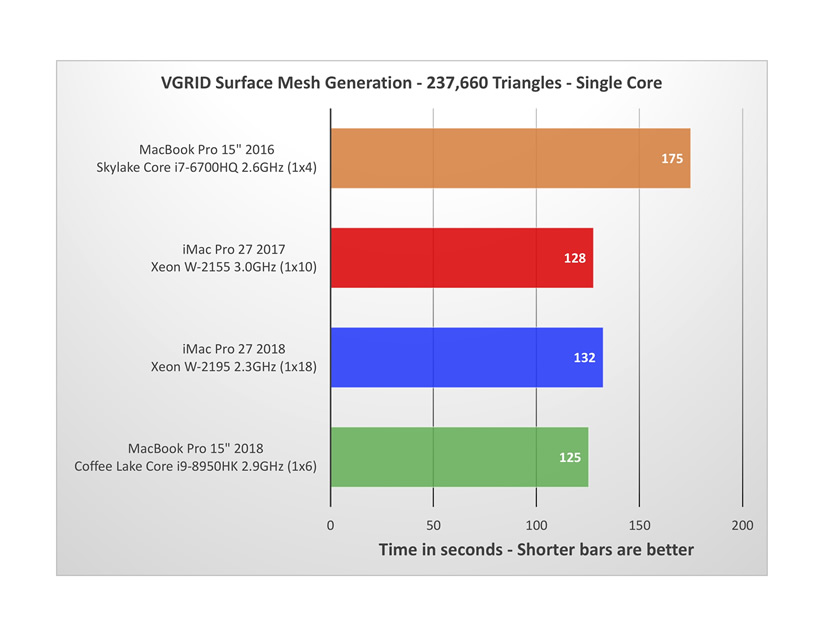 Next we’ll look at a numerical simulation, where we compute flow on the mesh. Often, these simulations are run on supercomputer clusters, using anywhere from 500 to 2000 cores or more, sometimes over a period of days or weeks. Smaller cases can be run on multi-core laptop and desktop computers, especially among small business users and folks in academia. The flow simulation is very amenable to parallel processing and makes for a good multi-core benchmark. Here, we compute flow around a NACA 0012 airfoil. Results are plotted to show gigaflops (GFLOPS) as a function of the number of cores used. The 18-core iMac Pro is king here, running up past 60 GFLOPS on 18 cores, but the new MacBook Pro starts out slightly faster on 1 core and hangs right with both iMac Pros up to 3 cores. At 4 cores, the 2018 MacBook Pro is 24% faster than the 2016 model, and the new MacBook Pro goes on to be 30% faster overall when using all 6 of its cores (compared to the old model's 4). 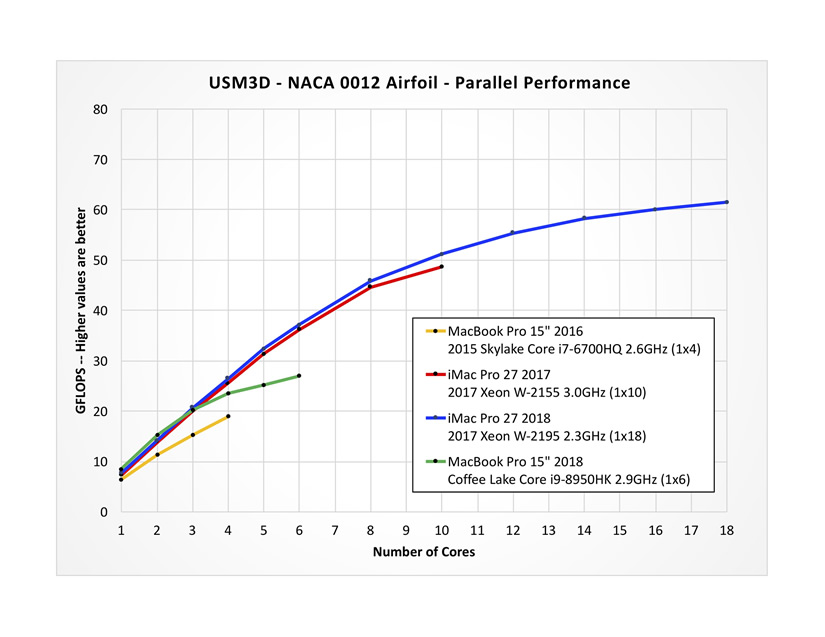 I also looked at scaling performance, which is interesting and tells a lot about a computer’s architecture. The chart below shows the multi-core speedup (= single-core time divided by multi-core time) for each computer tested. For reference, an ideal trend is shown with a dashed line. Here we can see a very typical result, where classes of computers tend to separate out into packs – the two workstation-class iMac Pros running together, and the two laptop-class MacBook Pros running together. 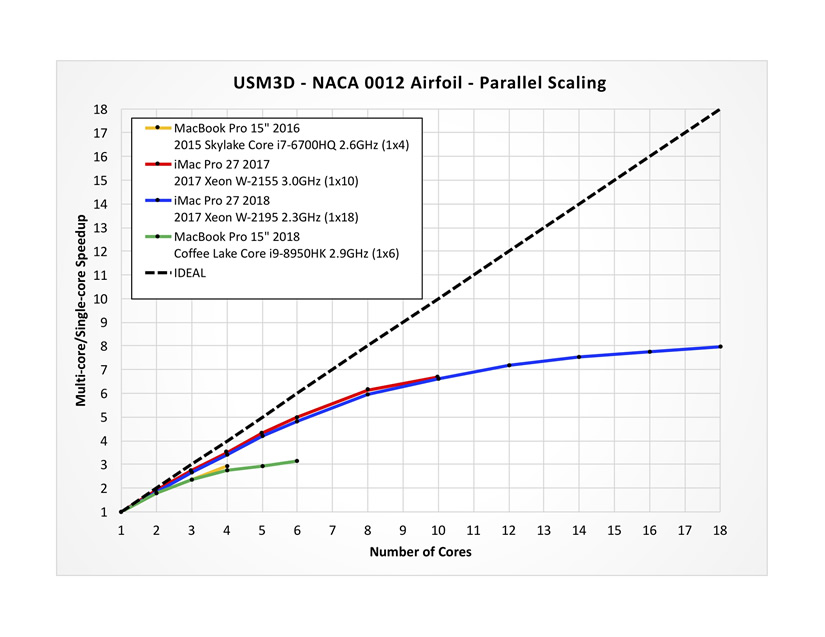 For a final CPU benchmark I want to look at LINPACK, which solves a dense system of linear equations by LU decomposition with partial pivoting. This benchmark uses Intel's Math Kernel Library (MKL) code and solves a system of 15,000 equations. Here, the 2018 MacBook Pro runs with the two iMac Pro models up to about 5 cores before falling off, which is pretty impressive. Topping out with 260 GFLOPS at 6 cores, the new MacBook Pro is a whopping 60% faster than the old 2016 model was on 4 cores. 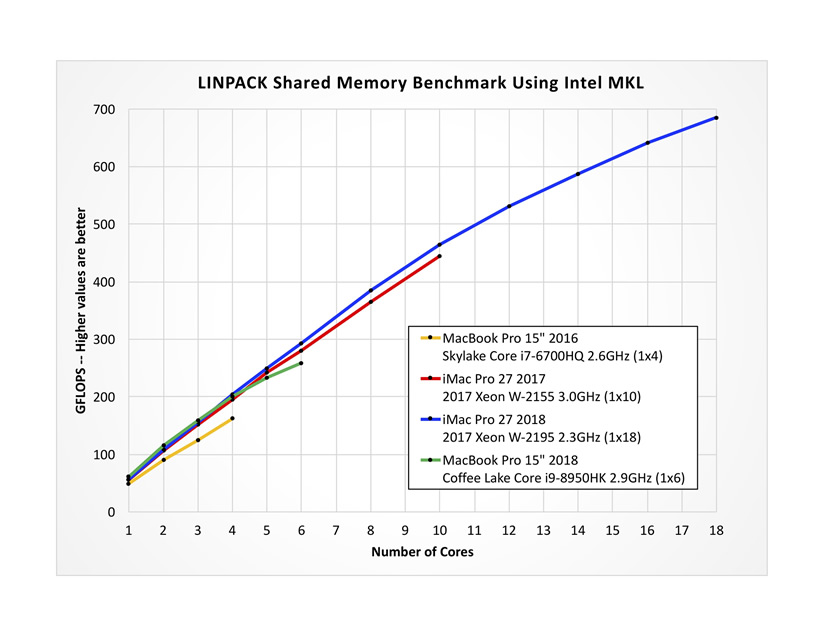 In terms of graphics performance, the MacBook Pro is no slouch. The AMD Radeon Pro 560X GPU handled everything I threw at it with smooth and clean rendering, including CAD work and 3D CFD visualization. But I was fortunate to also get a new Blackmagic eGPU for testing, which contains an AMD Radeon Pro 580 (with double the video memory -- 8192 MB -- of the 560X). The eGPU is quiet and easy to use – plug it in, attach it to the MacBook Pro with an included Thunderbolt 3 cable, and connect an external display via a second Thunderbolt 3 port or HDMI port. I tested the eGPU with Sony, Sharp, and Samsung displays of various resolutions, and it worked great in all cases. The eGPU cannot be used to accelerate the MacBook Pro's internal display, but it can be used as an OpenCL compute node with or without an external display attached. 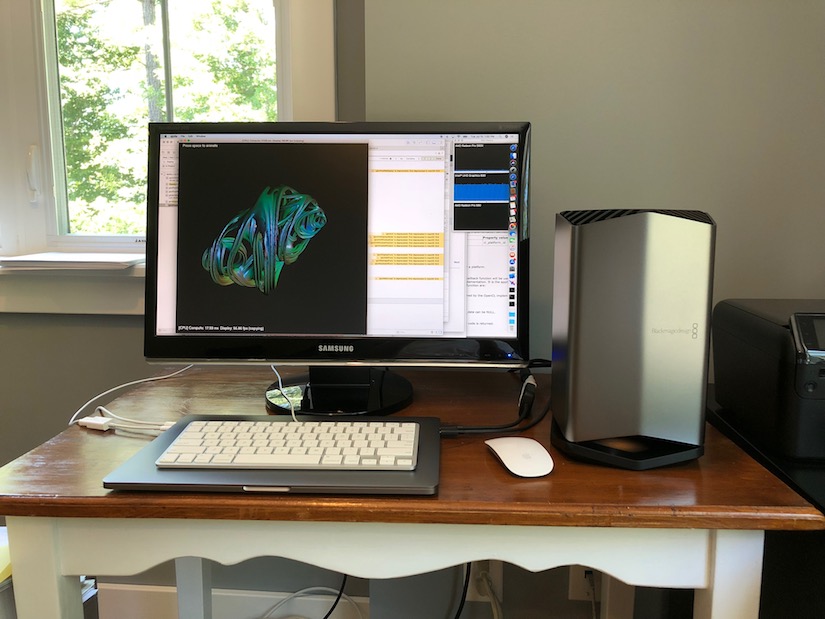 As expected, the eGPU gives a pretty solid jump in performance. Here are some LuxMark OpenCL benchmarks comparing the eGPU to the two GPUs available in the MacBook Pro, as well as the iMac Pro (with its AMD Radeon Pro Vega 64) thrown in for perspective. In these two benchmarks, the eGPU gives 2.4X-2.7X increases in performance over the discrete 560X GPU in the MacBook Pro and bumps performance up to about 70% of the iMac Pro. 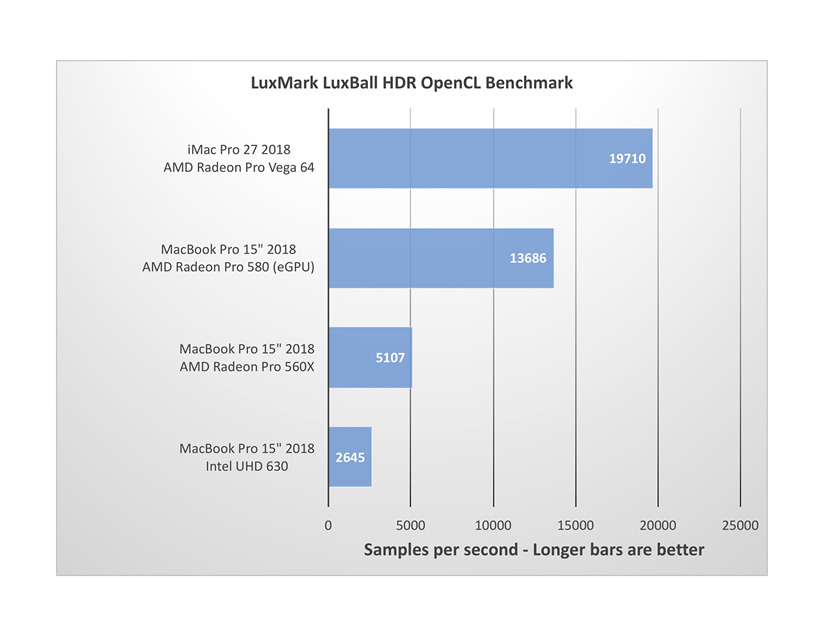 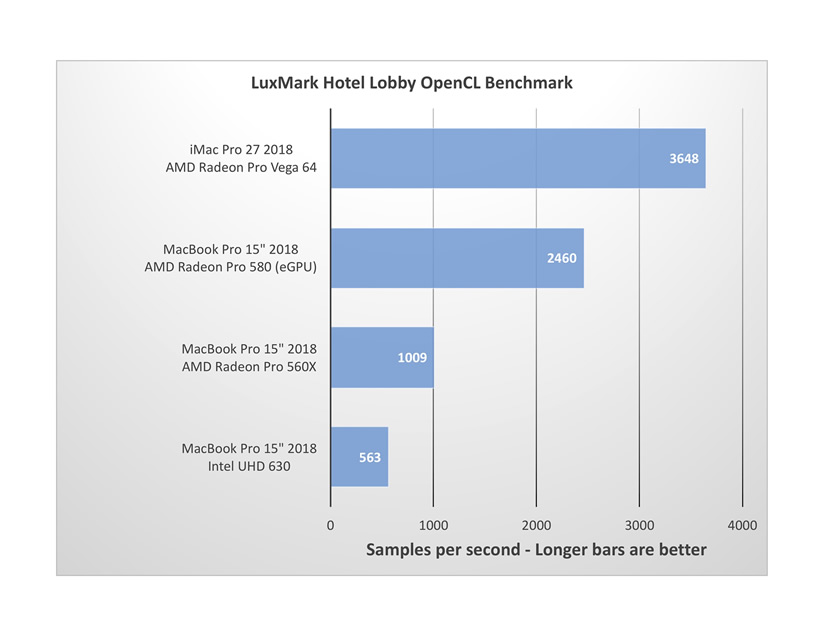 Now, there is a catch to using an eGPU – ultimately it’s limited by the bandwidth of the Thunderbolt 3 port, which is 40 Gbps. That’s not an issue for graphics tasks or compute tasks that can be completely offloaded to the eGPU, but for tasks that communicate between the CPU and eGPU, or between the various onboard GPUs and the eGPU, Thunderbolt 3 can be a bottleneck. When I benchmarked some OpenGL CAD software that I develop and counted frames/sec with the MacBook Pro in clamshell mode running an external 4K display, the eGPU was no faster than the discrete 560X GPU in one case, and actually slower in another. Upon further examination, I determined that this was due to traffic between the CPU and eGPU, as geometry computations on the CPU were fed into OpenGL for rendering. Moving the computations over to OpenCL on the eGPU would eliminate this bottleneck, and I plan to investigate that in the future. For now, I can say that anyone looking for maximum benefit from an eGPU should make sure their software or game can take proper advantage of it. In summary, there is a lot to like about the 2018 MacBook Pro. It has made great strides in performance and runs alongside the iMac Pro for the single-core and 2- to 5-core computations I benchmarked in this review. The increase in memory to 32GB makes it a truly viable machine for my CFD workflows. The keyboard is more precise and quieter, and the new True Tone display is a standout feature that my eyes appreciated every time I looked at it. Overall this 2018 model is a very solid evolution, with improvements that emphasize the "Pro" in MacBook Pro.
——————— 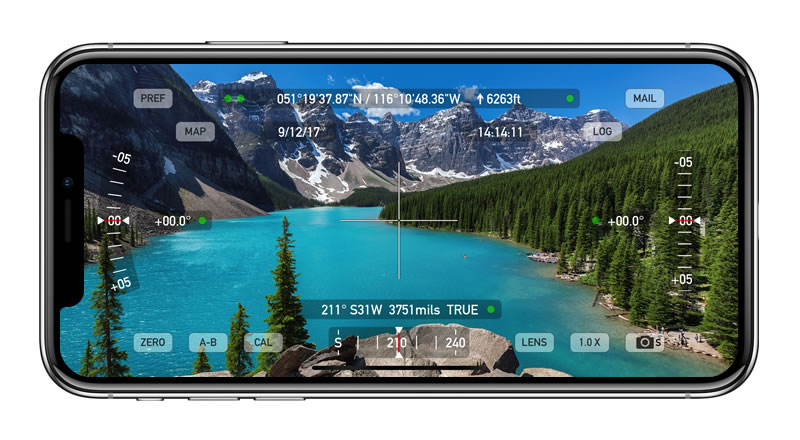 TheodoliteThe original, indispensable, pioneering AR viewfinder for iPhone and iPad. Where will you take it on your next adventure?

8 year anniversary sale -- get Theodolite for 40% off!