A pair of Air Canada insiders are shedding light on the airline's policy of overselling flights, revealing what they say is a widespread practice of duping passengers into believing they have a seat on a plane and stringing them along until the last possible moment.

As a way to try to maximize revenues, airlines are allowed to sell more plane tickets for a flight than there are available seats, but the former and current ticket agents who spoke with Go Public say Air Canada is less than transparent with customers who are likely to be denied boarding because a flight has been oversold.

"It's never fun to have to lie to people," said the former customer sales and service agent, who worked at Air Canada's check-in counter at Vancouver International Airport for several months before quitting just over a year ago.

"I had to tell people over and over again that they were gonna get on the plane, when I knew that they might not."

The other insider, a longtime Air Canada ticket agent who still works for the airline and trains employees, says he is now one of the people teaching new agents to not be forthcoming.

"I say to the new hired agents, 'You can't put up with confrontation all day long. If someone has 'GTE' [for "gate"] on their boarding pass, it means they don't have a seat. But if you explain that to them, they'll get upset. So just send them to the gate,'" he told Go Public.

"I train people to dupe passengers."

The day he spoke with Go Public, he said he'd pointed dozens of Air Canada customers to a gate knowing they didn't have a seat.

CBC has agreed not to identify the current and former Air Canada employees because doing so could jeopardize their current employment.

Air Canada says the practice of overselling is carefully managed, and employees are trained to be transparent with customers.

'Every route could be oversold'

The former Air Canada agent said he contacted Go Public because he wanted travellers to know how often staff are forced to scramble to find seats for passengers stuck on oversold flights.

"I was shocked," he said. "I had no idea that Air Canada was doing this at this scale."

I told them they had nothing to be worried about, and it absolutely killed me.- Former Air Canada ticket agent

It didn't matter if passengers were flying within Canada, to the U.S. or overseas, he said.

"Every route could be oversold."

'It absolutely killed me'

The former agent says he quit because he couldn't take the stress of constantly misleading customers.

As an example, he tells the story of an excited family flying together for the first time. When they checked in, their boarding passes didn't have assigned seats.

"I just felt awful about it, but I had to say that they were going to have a great trip, and push them through [to the gate]," he said.

"They ended up not getting on. I tracked them, and they were bumped. It was the last flight out that day." 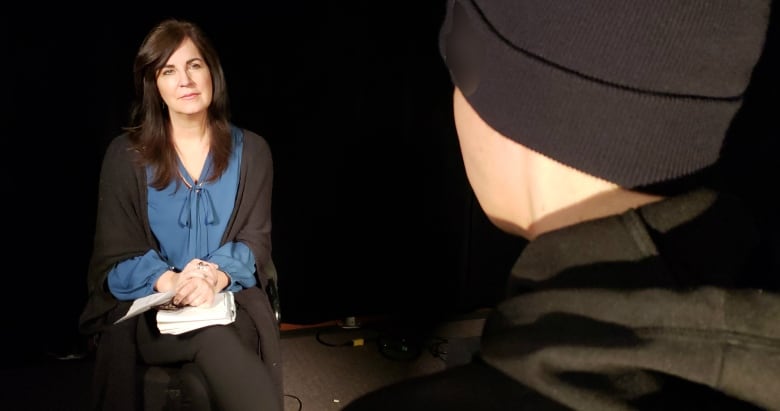 A former Air Canada agent tells Go Public’s Erica Johnson that he became so distraught about lying to passengers about overbooked flights, it took a toll on his health. (Dillon Hodgin/CBC)

He remembers a couple on their way to a honeymoon in Hawaii, who didn't have confirmed seats on an oversold flight.

"I told them they had nothing to be worried about, and it absolutely killed me," he said. "The chances of them making it on [the flight] were slim to none."

In another case, a passenger who was on his way to have life-changing surgery in Alberta the next day stood a good chance of getting bumped from a flight, he said.

"I had to do a complimentary upgrade to make it happen — which is something that I shouldn't have done. But at the end of the day, he needed to get on that plane."

Your seat 'will be assigned at the gate'

The former agent says he was told during training not to inform customers at the check-in counter that the reason they don't have an assigned seat is because the flight was oversold.

"Nobody wants panic from the second of check-in. That's not fun for the company to have to deal with," he said.

"I really wasn't able to tell people exactly what was going on and give them the full picture. They were strict about that. We're trained to tell them that … they have nothing to worry about."

He says he also felt badly for colleagues working at the gates, who had to deal with passengers once they learned the flight was oversold and they didn't have a seat.

Go Public requested an interview with Air Canada, but the airline declined.

In an email, spokesperson Angela Mah disagreed with many of the allegations made by the current and former Air Canada employees, and dismissed the impact of overselling.

"Overselling ... accounts for less than 1 per cent of passengers booked," wrote Mah, explaining that the airline flew approximately 51 million customers in 2017/18. 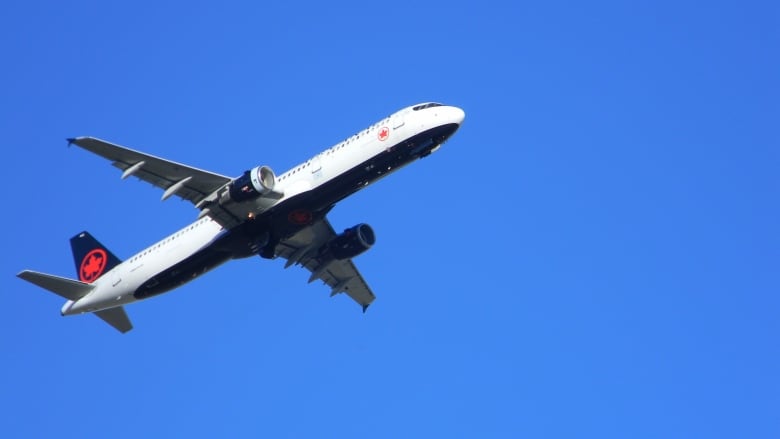 That one per cent amounts to 510,000 tickets oversold, but Mah says only a fraction of that number results in customers being denied boarding because "several million customers per year no-show."

Mah pointed out that overselling is approved by the Canadian Transportation Agency and is a "common practice amongst many international network airlines to ensure the maximum number of seats are filled on a departing flight."

She also said the bigger reason passengers end up with no seat on a plane is due to "overbooking" — when an aircraft is replaced with a smaller plane, for a host of potential reasons including mechanical issues.

She would not confirm how often this happens, saying those numbers are "commercially sensitive" and an unavoidable reality for all airlines — including Air Canada's competitor, WestJet.

WestJet told Go Public it does not "intentionally oversell" seats.

Internal documents on Air Canada's employee website explain that the airline oversells flights because its management team "is tasked with ensuring that the maximum revenue potential is made on each and every flight."

In 2017, Air Canada reported a profit of $2.04 billion, more than double what it earned the previous year. Figures for 2018 will be released shortly.

The website says the airline "uses a sophisticated system" to "calculate the acceptable level of oversell risk."

It then explains what Air Canada agents should do in the event there are more passengers than seats for a flight. 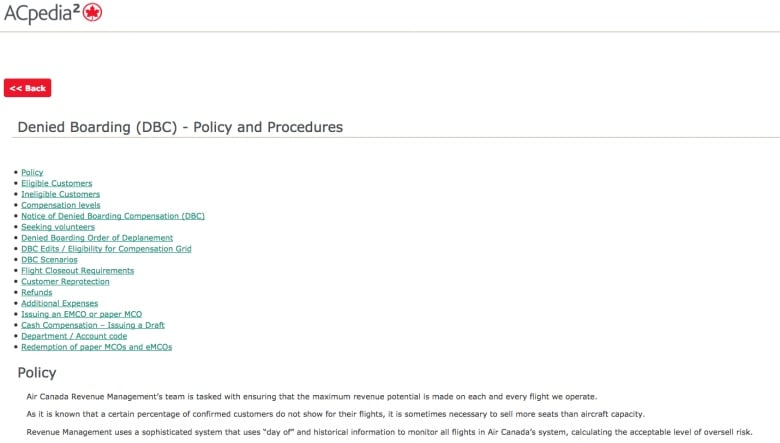 A screenshot of an internal Air Canada website. It instructs agents to 'make the compensation sound as attractive as possible' when trying to entice passengers to give up their seats on oversold flights.

"When flights are oversold there is certainly a level of stress for both the gate agent and customers involved," the website says.

"Soliciting volunteers to travel on later flights not only fulfills our legal requirements, but may also assist the gate agent in alleviating some of that stress. Making announcements for seeking volunteers [to give up their seats] makes a positive impression on our customers, by demonstrating that we are trying our best to accommodate all of our customers."

The Air Canada agent who works in a busy airport says accommodating customers can sometimes be extremely difficult.

"It's hell for us to have to turn these passengers away," he said.

"Kids are crying. Saying, 'Daddy, you promised we'd be [there] for dinner' and I have to explain that the flight is oversold."

Business passengers are 'most valuable'

Fred Lazar, an airline industry analyst and associate professor of economics at York University's Schulich School of Business, says one reason passengers might get bumped from a flight is because Air Canada has focused on servicing the country's business sector — frequent flyers who want an international network of flight options and often pay premium fares for the flexibility of changing their flights last minute.

"Top-tier passengers are the most valuable," Lazar said.

"So [the airline] will bend over backwards to accommodate them, even if it means bumping some basic economy passengers from the airline and enduring the bad publicity for a short time." 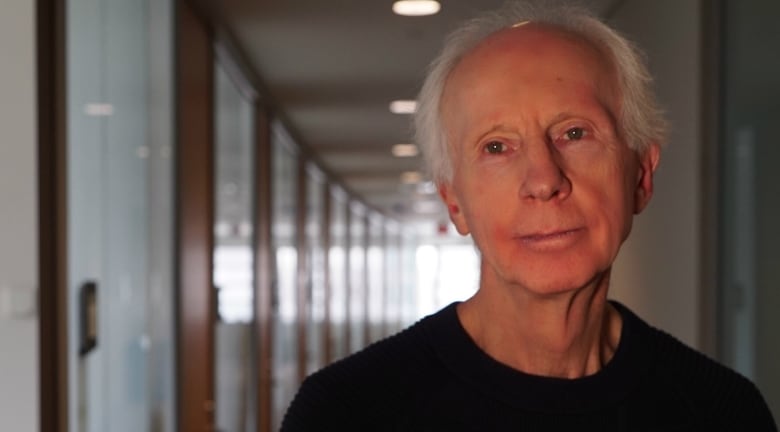 The former Air Canada agent who spoke with Go Public says one way to ensure you have an actual seat on a plane is to log on to Air Canada's website 24 hours before the flight to choose a seat. Or, pay a fee for seat selection when you buy your ticket.

"Anyone who has a seat assigned to their ticket when they get to the airport never has to worry about being put on standby," he said.

Regardless of why an airline has more passengers than seats on a flight, new federal airline regulations coming down the runway will make it harder for travellers to claim compensation if they're denied boarding, says Gabor Lukacs, founder of a Canadian advocacy group called Air Passenger Rights.

Currently, airlines must seek volunteers to give up their seats before denying anyone boarding. Passengers who are involuntarily bumped are entitled to compensation — up to $1,350 — depending on the airline, destination and length of the delay.

The new proposed regulations provide higher compensation, but require the passenger to prove they were denied boarding due to an oversold flight caused by a situation within the airline's control.

"This is impossible to show," Lukacs said. 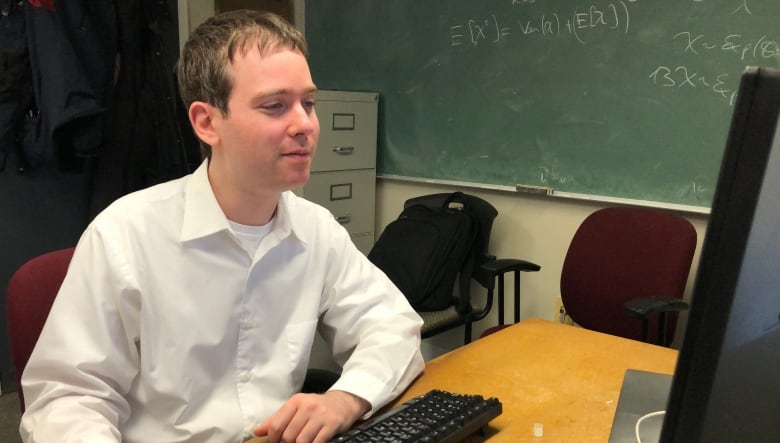 Air passenger rights advocate Gabor Lukacs says the federal government's new proposed regulations will make it difficult for passengers to get compensation after they've been involuntarily denied boarding because the airline oversold a flight. (David Laughlin/CBC)

Lukacs says Canada should be emulating European standards, where anyone with a valid ticket who doesn't get on their plane is considered to have been denied boarding — and is eligible for compensation.

"In Canada there is no excuse for drafting a definition so narrowly that people who pay their hard-earned dollars for their seats won't get compensated when they are denied boarding on their flight," he said.

Minister of Transport Marc Garneau says the new regulations won't ensure everyone has a guaranteed seat, but will hold airlines responsible for denied boarding.

"They're not going to get out of anything," Garneau told Go Public, pointing to stiffer penalties in the new regulations.

He says there will be "heavy penalties" if a passenger is denied boarding because the airline oversold its flight — in some cases up to $2,400.

His organization has started an email writing campaign for people to tell the federal government that the proposed air passenger rights regulations are inadequate.

So far, almost 5,000 people have participated in the campaign. The deadline for public feedback on the draft regulations is Feb. 20.

"Canadians are fed up with how airlines treat them," he said.

Go Public is an investigative news segment on CBC-TV, radio and the web.

We tell your stories and hold the powers that be accountable.

We want to hear from people across the country with stories you want to make public.