The 19-year-old student at Michigan's Grand Valley State University has written nearly 700 quizzes for BuzzFeed since 2017, including "Which One Of Justin Bieber's Many Haircuts Are You Most Like?" and "Everyone Has A Pop-Tart Flavor That Represents Them Best — Which One Are You?"

"I kind of got hooked on them because they were just really fun and BuzzFeed kept promoting them to their quiz page," McMahon told As It Happens host Carol Off.

While BuzzFeed now covers everything from pop culture to politics, it made its mark early on with relatable listicles and fun quizzes.

A huge driver of traffic

The thought of getting paid for the quizzes never crossed her mind — until she saw a blog post by Matthew Perpetua, BuzzFeed's former director of quizzes, who was among the 200 employees laid off by the digital media company last week.

"You might be wondering — wait, why would they lay you off? You were doing the quizzes, and that brings in a lot of money! Well, that is true," Perpetua wrote.

He then referenced one such super-user — a Michigan teen who he says was the site's "second highest traffic driver worldwide."

"When I read that paragraph about, like, me basically ... I felt kind of like a weight put on my shoulders, and I kind of felt like, am I one of the reasons all these people lost their jobs?" McMahon said.

"BuzzFeed obviously realized that they can just lean on people like me who post all these quizzes for free and they don't need to pay the workers."

She tweeted her dismay and several BuzzFeed workers — past and present — reached out to assure her the layoffs were not her fault, she said.

The key to her success

Perpetua says the key to McMahon's success was a combination of quality and quantity.

"We were working too hard, making these elaborate things, and all of her stuff was really stripped down," he told the New Yorker.  "She'd do five quizzes in a day, and I'd maybe do that many in a week. People were, like, 'If this girl stops, that's a problem.'" 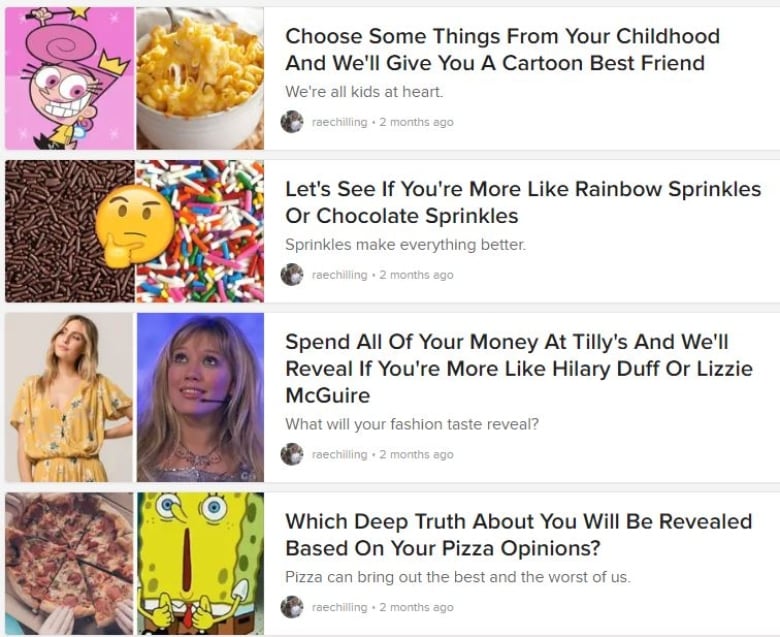 This is just a small sampling of BuzzFeed quizzes made by Rachel McMahon. (BuzzFeed)

Some analysts have estimated McMahon may have single-handedly generated millions of dollars of ad revenue for the company, but a BuzzFeed spokesperson told the New York Post the actual number is more like $200,000 US.

BuzzFeed also told the New Yorker that while McMahon was the second highest driver of traffic worldwide for a couple months in 2018, she was fifth overall for the year.

The company did not respond to As It Happens' request for comment.

'I'm getting so many opportunities'

Since McMahon went public with her story, she says BuzzFeed has reached out to her with freelance opportunities — but these days, she's not exactly desperate for work.

Several companies have contacted McMahon with job and interview offers, including Netflix.

hey <a href="https://twitter.com/rachelmcmaho?ref_src=twsrc%5Etfw">@rachelmcmaho</a>! I'd love to work with (and pay) you. DM me!

"I'm getting so many opportunities, I don't even know if BuzzFeed would be the best for me anymore," she said.

"It's just crazy because, like I said, I'm in college. I didn't really know what I wanted to do with my career yet, and now I have all these options, so it's really good."