Discover the hilariously epic failure of a crypto-fueled libertarian cruise

At some level, the idea of people being free to dynamically choose their neighbors is kind of interesting.

Plus they are not designed as an ideal habitat for the comnunity of people living on board. They are designed to ferry aerial weapon systems across the globe to kill people and break stuff. Living conditions on board being secondary to that function.

Unlike a “libertarian paradise”, its function requires a strict adherence to a heirarchal structure enforced by law, custom and violence if necessary.

aka nuclear-powered aircraft carriers - rely on an insanely complex, costly, mostly land-based logistics & maintenance train. Backed by the resources of a nation state and its economy.

That’s a great analogy. A common theme with utopian libertarians is a total lack of understanding of the supply chains required for their lives to be comfortable. Like, hundreds of thousands of people and hundreds of links in a chain are required to get coffee on the store shelf. It took us hundreds of years of building up social systems, governments, technologies, and trade to create a world where everyone can just have coffee whenever they want. Or chocolate. Or nectarines. Or toilet paper. The notion that you can just “start over” on civilization and get something better is mind boggling hubris and ignorance.

Another common theme in tech bro libertarians is a casual disregard for the expertise of others. This is the conversation I would like to have with these fools:

“Big ship you got there, So, how many pipe fitters in your group?” “None” “How about a marine electrician?” “Uh, no” “You must have a few great diesel mechanics, though, I’m sure” “Um” “Underwater mixed gas welders? Gonna need a couple of those, probably” “A who?”

The world runs on the specialized expertise of others. We all benefit from that expertise because of… wait for it… community and social contracts.

You should really read the article - it’s a great read. They did not even get close to living on the open ocean - or anywhere else for that matter.

A ship of fools, but it was an awesome ship. (It isn’t the generic one above this BoingBoing article; it’s this beauty, designed by Renzo Piano.)

then it isn’t much of a seastead… more like a bunch of waterworld fanboys living on their houseboats.

… or… in an alternate version, a less functional version of The Raft in Neal Stephenson’s Snow Crash:

Hiro heads north to where the Raft, a huge collection of boats containing Eurasian refugees, is approaching the American coast. The center of the Raft is L. Bob Rife’s yacht, formerly the USS Enterprise nuclear-powered aircraft carrier. Rife has been using the Raft as a mechanism to indoctrinate and infect thousands with the virus and to import it to America. Y.T. is captured and brought to Rife on the Raft, who intends to use her as a hostage, knowing her connection to Uncle Enzo. With help from the Mafia, Hiro makes it onto the raft and recovers the nam-shub of Enki, which Rife had been concealing. With help from Juanita, who had previously infiltrated the Raft, the nam-shub is read out and Rife’s control over the Raft is broken. Rife flees the Raft,

Hiro Protagonist is a hacker and pizza delivery driver for the Mafia. He meets Y.T. (short for Yours Truly), a young skateboard Kourier (courier), who refers to herself in the third person, during a failed attempt to make a delivery on time. Y.T. completes the delivery on his behalf, and they strike up a partnership, gathering intel and selling it to the CIC, the for-profit organization that evolved from the CIA's merger with the Library of Congress. Within the Metaverse, Hiro is offered a datafi...

The actions itself are inherently entropic. Requiring constant additions of energy and resources to keep everything going. Which is why pooling, sharing and keeping control of resources works for keeping a community going.

The whole “who’s going to make the ball bearings” question that sometimes gets lobbed into discussions of utopia scenarios.

How telling, how very telling, that the liber-tech-ians themselves can’t deal with their own shit.

5,000 years of sailors across every human culture: ships must be run with strict discipline and universal adherence to rules, or everyone will die.

How can such ancient and time-worn practices possibly be a successful strategy today when the “DiD mY OwN rEsEaRcH” crowd places value on individuals over the group? … why, it’s as if the modus operandus of “move fast and break things” (and other disruptive-tech clichés) simply will not work in a closed system, where the feedback loop is altogether shorter and pitiless as well?

where the power is going to come from

Good luck getting their nautical HOA to pay for the needed upkeep and repairs to keep them afloat.

Oh snap!
Good thing I left my iced tea in the other room or it’d be sprayed all over my keyboard right now.

Using their own money, they funded the first attempt at a single residential seastead, in the form of a floating white octagonal box 12 nautical miles off the coast of Thailand. Elwartowski and his girlfriend, Nadia Summergirl, lived there for two months in early 2018, until the Thai government discovered the seastead’s existence

Two months in that thing?

These aren’t homes for the techlords, these are for the demi-rich suckers to be fleeced of big money to live like an anchorite in a shack on a stick, dressed up with CGI.

Rothbart explained that in the libertarian utopia, parents will be under no obligation to feed or clothe their child, because the infant is always free to crawl out to the street and beg passers-by to take it on as a foster-child.

Man, I really want them to make some of these “Seapods” and for people to buy them, just to see exactly what kind of a disaster it would end up being.

The notion that you can just “start over” on civilization and get something better is mind boggling hubris and ignorance.

white octagonal box 12 nautical miles off the coast of Thailand.

I glossed over that when I read the article, but no wonder Thai authorities were pissed - 12 miles! They were living firmly within the country’s borders, no doubt illegally, in what is essentially a boat (probably also illegal), while pretending the laws of Thailand didn’t apply to them because they were in the water.

The only environment I could think of that could possibly be worse is outer space, and there’s no way anyone would…

I remember the L5 Society and their vision of libertarian utopias in O’Neill habitats. Good times!

Re: complicated supply chains that facilitate getting things / ditching existing (trade) systems that took decades to build on a whim to start over

Using their own money, they funded the first attempt at a single residential seastead, in the form of a floating white octagonal box 12 nautical miles off the coast of Thailand.

I guess one could argue that The Principality of Sealand was an earlier example of residential “seasteading” of sorts but it’s hardly been a picture of peaceful utopia. The people who live there didn’t build it (it’s a decommissioned WWII-era gun platform) and in fact seized it at gunpoint from an earlier group of squatters/pirate radio broadcasters, then had to spend the next several decades trying to fend off people trying to seize it from them in the same way.

It’s a shithole place to live that apparently survives primarily on selling novelty stamps and the like. It exists today only because the government of the United Kingdom doesn’t seem to think it’s worth the trouble to evict them. And it STILL sounds like a nicer place to live than any of these libertarian sea pods.

Those pod houses look like some kind of sci-fi supermax prison.

Who wouldn’t want to live in an Azkaban isocube?

And if they would float in a stable way and survive storms and whatnot - sooner or later they’d end up clustered together in one of the ocean gyres. Like all that plastic waste.

In oceanography, a gyre (/ˈdʒaɪər/) is any large system of circulating ocean currents, particularly those involved with large wind movements. Gyres are caused by the Coriolis effect; planetary vorticity, horizontal friction and vertical friction determine the circulatory patterns from the wind stress curl (torque). Gyre can refer to any type of vortex in an atmosphere or a sea, even one that is man-made, but it is most commonly used in terrestrial oceanography to refer to the major ocean systems...

The seapods crack me up. It’s as though they based their whole concept of living on Subnautica, not realizing that magic sci-fi replicators aren’t a real thing.

It’s like some one designed a level of hell

Perfect if you’re trying to get to the other other place though: 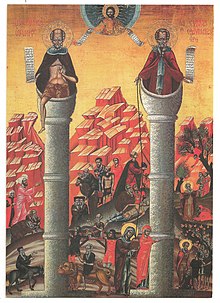 A stylite (from Greek στυλίτης, stylitēs, "pillar dweller", derived from στῦλος, stȳlos, "pillar", Classical Syriac: ܐܣܛܘܢܐ‎ ʼasṯonáyé) or pillar-saint is a type of Christian ascetic who lives on pillars, preaching, fasting and praying. Stylites believe that the mortification of their bodies would help ensure the salvation of their souls. Stylites were common in the early days of the Byzantine Empire. The first known stylite was Simeon Stylites the Elder who climbed a pillar in Syria in 423 and r...

Another common theme in tech bro libertarians is a casual disregard for the expertise of others.

As seen in Elon Musk’s attempts to reinvent transport. I’ve already posted a takedown of Hyperloop, so here’s one on the Boring Company.

Four years ago, I broke my comment section by declaring that Elon Musk’s Hyperloop proposal had no merit, combining technical criticism with expressions like “barf ride” and ̶…

a) has little understanding of the drivers of tunneling costs, b) promises reducing tunneling costs by a factor of 10, a feat that he himself has no chance to achieve, and

c) is unaware that the cost reduction he promises, relative to American construction costs, has already been achieved in a number of countries.