They had a pandemic and 289 competitors going against them, but nevertheless two winning teams of the Beamline for Schools international competition have arrived at DESY in Hamburg. High school students from Team EXTRA from Bari, Italy, and Team Teomiztli from Mexico City, Mexico brought their experiments and are ready to begin work at DESY’s test beam. 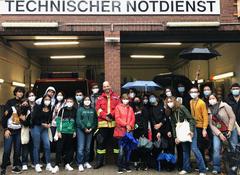 Download [1.1 MB, 1973 x 1447]
Students from the Team Teomitzli from Mexico City and Team EXTRA from Bari in Italy pose with DESY firefighters after their fire safety training, required before they begin their experiments. Photo: DESY, Joseph Piergrossi
The Beamline for Schools competition, which is organized by CERN since 2014 and since 2019 has been hosted at DESY in Hamburg, encourages teams of high school students from around the world to submit proposals for experiments that can be performed on a particle beamline. The winning teams can perform their experiments with the help of scientists from CERN and DESY. 289 teams from 57 countries sent in proposals. Over the summer, the winning teams were selected by a panel of physicists and engineers.

Both teams will have two weeks to complete their experiments at DESY. The teams underwent special preparations to travel under the current conditions. After clarifying everything with health authorities, the students were cleared to come to Hamburg.

“I’m really happy this year after all the difficulties we could have both teams here this year to do their scientific programmes,” says Beamline for Schools coordinator Margherita Boselli from CERN, who accompanies the students during their experiments. “One of the real benefits of the programme is the exchange between the students from different backgrounds, which I’m happy can happen this year.”

Team “Teomitzli”, comprising 7 students from Mexico City’s Escuela Nacional Preparatoria “Planatel 2”, will use an electron beam at the DESY testbeam area to study aspects of the production of Cherenkov radiation in different materials. Cherenkov radiation is a form of electromagnetic radiation formed when high-energy particles pass through a material faster than light in the same material can. Their results can inform the development and production of more varied particle detectors.

“It’s not only a feeling of happiness – this is a great social and scientific experience for us. We’ll be learning and working in an international environment with people from around the world in different languages,” says Alma Teresa Aquino Maldonador from Team Teomitzli. “It’s a great opportunity for us to carry back to Mexico with us, especially for those who have interest in science and further education.”

Team “EXTRA”, made up of 9 students from Liceo Scientifico Statale “A. Scacchi” in Bari, will use the electron beam to examine the transition radiation effect, where X-ray photons are generated when high-energy electrons pass through materials of certain optical properties. 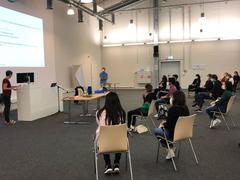 Download [831KB, 2016 x 1512]
The students received their first briefings on performing experimental work at DESY following their arrival in Hamburg. Photo: DESY, Joseph Piergrossi
“We find this opportunity very useful – it’s a fantastic experience,” says Alberto Tatulli from Team EXTRA. “We didn’t expect at all to be winners. Just being here is overwhelming. Everyone is so nice here – we look forward to meeting everyone and getting the most of this experience.”

On 14 September, the students will also be officially welcomed to DESY in a ceremony with representatives of the winning countries as well as of CERN and DESY, alongside the sponsors of the competition.

The Beamline for Schools competition has run since 2014. Since 2019, the experiments have been run at DESY, since the Large Hadron Collider has been undergoing upgrades necessitating a longer shutdown of the particle accelerators’ complex at CERN.

The competition is an Education and Outreach sponsored by the CERN & Society Foundation, as well as by the Wilhelm and Else Heraeus Foundation, with contributions from the Arconic Foundation, the Amgen Foundation, and the Ernest Solvay Fund, managed by the King Baudouin Foundation.