Samsung has announced its 15.6-inch OLED monitor for notebooks. The Ultra-HD display features very advanced specs, will go into mass production next month, and will be used by leading makers of high-end notebooks later this year.

The Samsung 15.6-inch OLED monitor for notebooks relies on an Ultra-HD (3840×2160) OLED panel that boasts with a brightness level ranging from 0.0005 to 600 nits, a dynamic contrast ratio of 120,000:1, a very low response time, and wide horizontal viewing angles. The display can reproduce 100% of the DCI-P3 color gamut, which is considerably more more accurate when compared to LCDs available today. Furthermore, the monitor carries VESA’s DisplayHDR True Black badge thus supporting at least HDR10 spec.

An added bonus of any OLED monitor are very narrow display bezels, which will enable makers of notebooks to further miniaturize their 15.6-inch class laptops. In the meantime, keep in mind that the OLED technology is not ideal and has its own weaknesses, including off-axis color shifting, ghosting, burn-in, and other. So, only time will tell how good the new display from Samsung is. 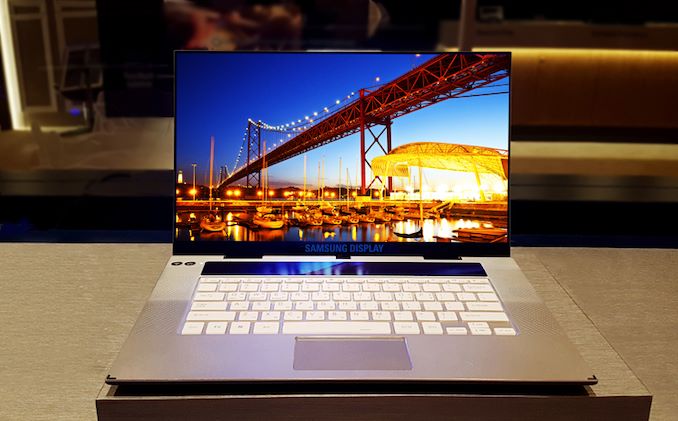 Samsung will start mass production of its 15.6-inch OLED monitors for laptops in mid-February, so expect actual notebooks that use the display to hot the market later this year.

Back at CES, Lenovo and HP announced plans to use 15.6-inch AMOLED panels with their premium laptops in 2019, but did not confirm the source of their monitors.