Each cluster consists of a master and multiple slaves, where a single MySQL instance (the master) accepts writes. The rest of the nodes (the slaves) replicate the data from master node. We use both semi-synchronous and asynchronous replication for slaves.

The availability of the master node is highly critical. Without a master, an entire cluster cannot accept writes and any incoming changes that require data to be persisted will fail.

All clients connected to the same HAProxy. The master and read-only slaves were configured on different ports. In the event of a planned failover:

This worked well during a planned failover. However, the following issues also surfaced:

In addition to the limitations listed above, managing HAProxy config dynamically was very challenging.

As mentioned, we patched HAProxy and ran our own version. We managed which backend received a request and which one was the backup. Additionally, we used customized hooks to circumvent HAProxy during failover activity.

We started to build our infrastructure in an immutable way with the help of Packer and a config management service (as described in our previous blog post).

With the approach described in this section, adding or changing MySQL servers became arduous because we had to manage HAProxy configs separately.

As we scale, we need to adapt to changes in our MySQL clusters. While designing for high availability, we considered the following:

Our new high availability solution, coupled with changes to pt-heartbeat, was designed to handle time skews. Our current setup includes: 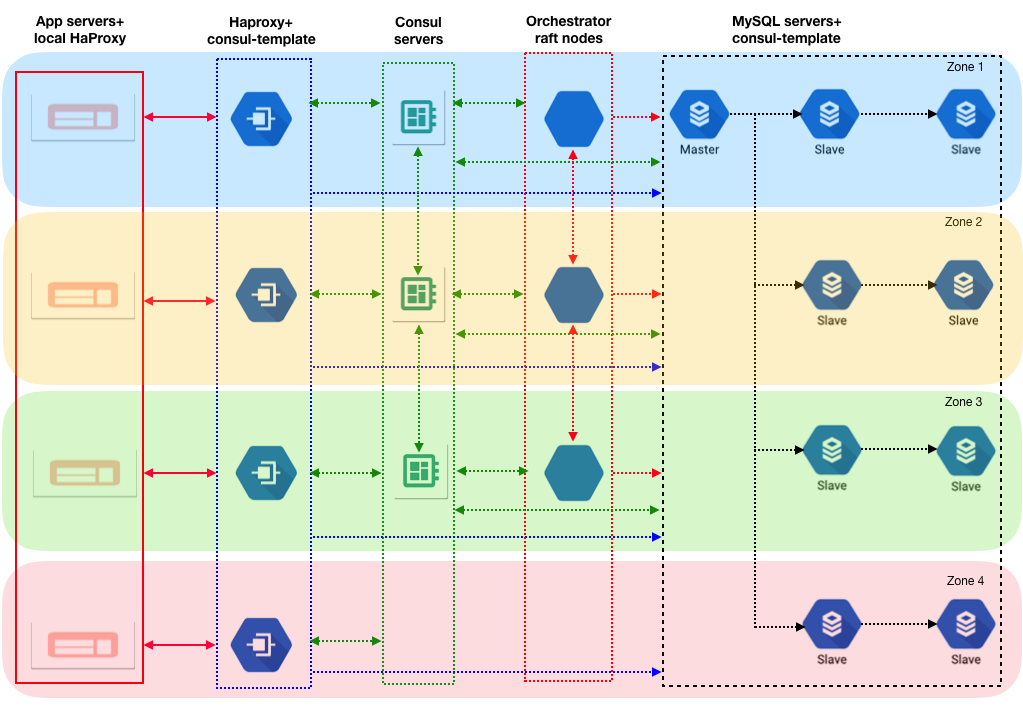 Our new setup addresses most of the limitations we listed in the Previous Implementation section. We introduced many new components, but we simplified and decoupled the failover tasks into smaller chunks.

Let’s see how these individual pieces function in a normal workflow.

On a normal day, the application connects to write and read MySQL hosts via its local HAProxy. The local HAProxy passes the request to the remote (second tier) HAProxy, which is aware of the current master and its slaves.

As noted above in the Previous Implementation section, our limitation was HAProxy. We were forced to failover using Google network routes. In order to avoid that, we use multiple HAProxy instances. There are many ways to achieve high availability in this situation:

We chose to use none of the above. We have both a monolith and microservice applications in our environment, and they are spread across a Google region in multiple zones. For the monolith, we run HAProxy locally. For microservices, which reside in Kubernetes, we run an HAProxy sidecar with remote HAProxy configurations. Because of this, applications will not have visibility into who is the current master. Only the remote HAProxy (the second tier) will have details about the master and slaves. As far as applications are concerned, connectivity ends locally.

We run two layers of HAProxy: local and remote. The local HAProxy, which is on client side, always connects to the remote HAProxy, which is located in another zone. This is done on purpose. Consider the following scenario:

To avoid the scenario above, we connect clients to the remote HAProxy in different zones. If there is a network issue which isolates a single zone, we won’t create a split-brain scenario.

The next section explains how remote HAProxy configs are updated.

Consul is a system from HashiCorp that can be used for service discovery, configuration, and segmentation functionality. In our case, we use Consul as a highly available KV store for configuration.

Each remote HAProxy runs consul-template which listens to changes in consul data.

In our case, consul-template listens to changes in master and slave data using the Consul KV store.

When there are master or slave value changes in the consul KV Store, the remote HAProxy identifies the changes through consul template, which updates the config files, and reloads HAProxy with the updates. All changes are handled automatically without human intervention.

The next section describes how the consul KV store is updated dynamically.

Orchestrator is MySQL high availability and replication management tool allowing for topology discovery, refactoring and recovery. We run Orchestrator in a raft setup. One server in each Google zone within a single region.

Orchestrator is responsible for:

Since we run Orchestrator in raft mode, one node is elected as the leader. This leader performs the role transition and communicates changes to other nodes in the raft. In addition, the leader updates the consul KV store with the changes.

Each slave then looks for its own row to calculate lag. With this approach, we eliminate dependence on a single server for slave lag, and time skews don’t result in slave lag.

In a planned failover scenario, the following occurs:

In an unplanned failover scenario, the following occurs:

Even though we use MySQL semi-synchronous replication, it’s not guaranteed that all the data written to master will be synced to slave at the same time. You can read more about this in this blog.

In order to avoid surprises during a master crash, we remove the crashed server out of the pool. We manually verify the server and add it back to pool.

After we rolled out the new architecture, we successfully completed planned and unplanned failovers. We achieved the following:

Orchestrator, Haproxy, Consul, Consul-template, and pt-heartbeat can be deployed independently, while working as a single cohesive unit. We can scale these servers as needed.

We want to thank Pythian for working with us on this project. Special thanks to Daniel Almeida, Gabriel Ciciliani, and Ivan Groenewold.