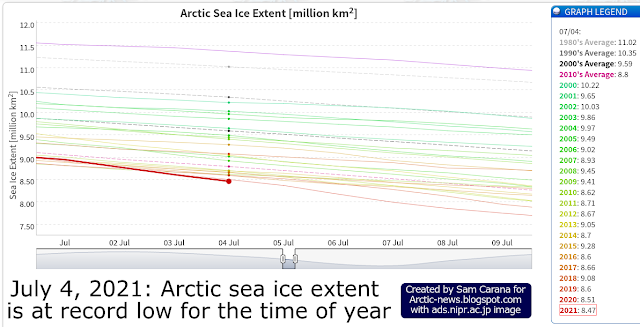 Above image, from the National Institute of Polar Research in Japan, shows Arctic sea ice extent at a record low for the time of year, on July 4, 2021, at 8.4 million km². 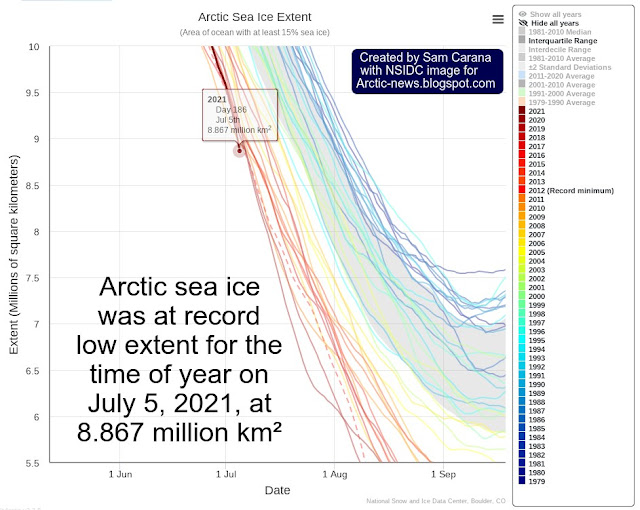 Subsequently, the NSIDC also indicated that Arctic sea ice was at record low extent for the time of year, on July 5, 2021, at 8.867 million km² (image above).

The U.S. Navy animation on the right shows Arctic sea ice thickness (in m) for the 30 days up to July 27, 2021, with eight days of forecasts included.

The very thin Arctic sea ice featuring on the University of Bremen image further below on the right indicates that there is now virtually no buffer left to consume further incoming heat.
The combination image below show forecasts for July 16 run one day earlier for Arctic sea ice in 2014 (left) and 2021 (right). 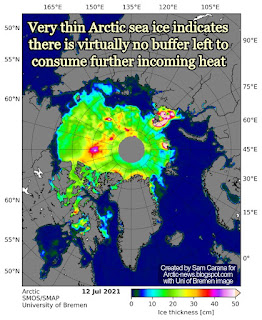 As sea ice gets thinner, ever less ocean heat gets consumed in the process of melting the subsurface ice, to the point where there is only a thin layer of ice left at the surface. While this thin layer of ice may remain at the surface for as long as air temperatures are still low enough, and this ice will still consume some heat at the bottom, at the same time it acts as a seal, preventing heat from the Arctic Ocean to enter the atmosphere.Albedo loss, latent heat loss, storms and changes to the jet stream can add up to dramatically amplify the temperature rise of the water in the Arctic Ocean, which comes with the danger of destabilization of hydrates at its seafloor, resulting in eruption of huge amounts of methane from hydrates and opening up pathways for release of even further amounts of free gas from underneath these hydrates, as illustrated by the image below.
And while the situation in 2021 is dire, the outlook for the years beyond 2021 is that things look set to get progressively worse.

Outlook is getting worse 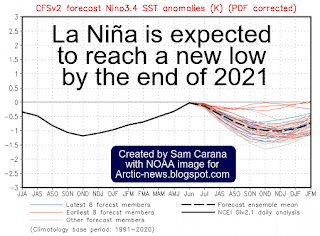 This situation in 2021 is the more remarkable given that we're in a La Niña period, as illustrated by the NOAA image on the right showing a forecast issued July 5, 2021, that indicates that La Niña is expected to reach a new low by the end of 2021.
El Niño events, according to NASA, occur roughly every two to seven years. As temperatures keep rising, ever more frequent strong El Niño events are likely to occur. NOAA anticipates the current La Niña to continue for a while, so it's likely that a strong El Niño will occur somewhere from 2023 to 2025. 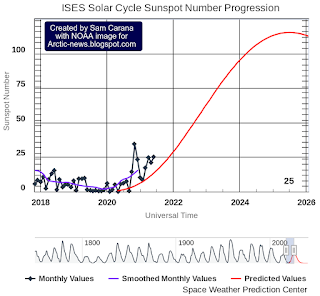 According to James Hansen et al., the variation of solar irradiance from solar minimum to solar maximum is of the order of 0.25 W/m⁻².

Temperatures are currently also suppressed by sulfate cooling, and their impact is falling away as we progress with the necessary transition away from fossil fuel and biofuel, toward the use of more wind turbines and solar panels instead. Aerosols typically fall out of the atmosphere within a few weeks, so as the transition progresses, this will cause temperatures to rise over the next few years.

So, the outlook is grim. The right thing to do now is to help avoid the worst things from happening, through immediate, comprehensive and effective action as described in the Climate Plan.