Driverless Cars Tap the Brakes After Years of Hype

LAS VEGAS—At a command center near the airport here, executives from automotive supplier Aptiv APTV 2.52% PLC showed why deploying robot cars will be far more complicated than many envisioned just a few years ago.

With people in town for the annual CES tech show, Aptiv revealed its new operations with more than 300 people, rows of computer monitors and a 30-foot video screen. It’s all to track and keep a fleet of 75 autonomous cars operating. Thirty of those vehicles make up the 20-hours-a-day operation for passengers on Lyft Inc.’s app, taking riders across a 17-square-mile area around the Strip. Those cars already have made about 30,000 Lyft trips.

“What was underappreciated by the industry is how long and how difficult it would be to industrialize the technology,” said Karl Iagnemma, president of Aptiv’s autonomous mobility. “Industrywide that recognition has dawned.”

The hype that has consumed the nascent driverless-car industry over the past few years has moved into a new period of cautious optimism following the fatal crash of an Uber Technologies Inc. test autonomous vehicle last year and separate crashes involving Tesla Inc.’s driver-assistance system. 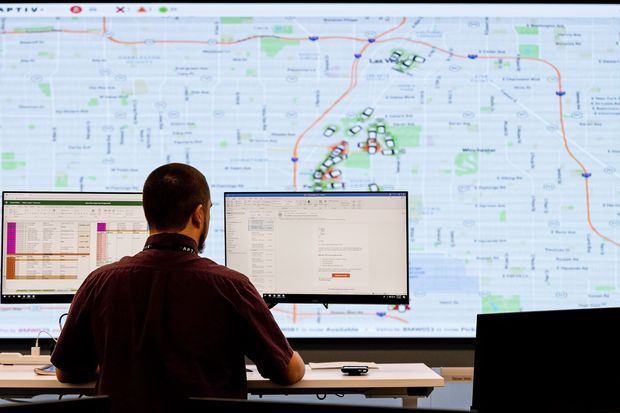 At both the CES tech show here last week and this week’s Detroit auto show, straight talk about robot-vehicle safety and scaled-back expectations replaced past years’ boastful claims of fully driverless cars flooding cities. The immediate future of autonomous vehicles is more subdued: plodding shuttles that drive around the block and cars that travel in confined, well-practiced routes with not one but two safety operators inside.

The Uber crash was a wake-up call for the industry, said Gill Pratt, head of Toyota Research Institute, which is developing autonomous technology. “That caused everyone to understand that there’s not only a long way to go technologically but from a social point of view there’s liability and brand risk.”

Autonomous-vehicle developers are generally struggling with a multitude of basic scenarios, from making unprotected left-hand turns to judging whether an idling car is double-parked. Often these developers deal with the robot’s confusion by having the vehicles slow down or stop, which can then create more confusion as other drivers grow impatient and illegally pass.

Mr. Pratt, who believes it will take decades for driverless cars to significantly replace human drivers on roadways, is betting that low-speed robot shuttles and taxis are the first ways the technology will be deployed.

Toyota has invested in a company called May Mobility Inc., which is running autonomous shuttles in Detroit and Columbus, Ohio, that stick to fixed routes. Because the six-passenger electric vehicles can only go up to 25 miles an hour, they aren’t required to have the same safety features as a normal car, meaning they could hit the streets sooner and are cheaper because they have fewer high-price sensors.

Some of the splashy goals laid out by autonomous-vehicle leaders have yet to come true.

On March 18, 2018, the Tempe, Ariz., police released a video of the fatal accident involving a pedestrian and an Uber self-driving vehicle. We asked experts to analyze the footage and explain what factors may have caused systems to fail. Photo: National Transportation Safety Board (Originally published March 23, 2018)

Tesla Chief Executive Elon Musk in 2016 promised to demonstrate a vehicle traveling in fully autonomous mode from Los Angeles to New York by the end of 2017. It didn’t happen. He told analysts in February that Tesla technically could do the trip with a preplanned route but wanted to wait until the car can be summoned from anywhere.

A little more than a year ago, Waymo CEO John Krafcik gained world-wide attention when he promised that, within months, the company would allow the general public to begin riding in driverless vehicles without anyone behind the wheel. “It’s not happening in 2020; it’s happening today,” he said in the November 2017 speech. “Fully self-driving cars are here.”

However, when Waymo, a unit of Alphabet Inc., GOOGL 0.74% launched the commercial service in suburban Phoenix last month, safety operators remained behind the wheel. During a presentation at CES last week, Mr. Krafcik said those operators act like concierges to answer passenger questions.

On the event’s sidelines, he said Waymo has driven many miles without a human in the front seat but demurred when asked when the safety operators would be pulled from the service. “We haven’t had any situations or incidents without any drivers in the front row,” he said. “We’re just proceeding as we should—very cautiously with safety as the primary focal point.”

Aptiv began offering rides to the public through the Lyft app a year ago with two safety operators in the car and began charging for those rides in May. During a demo ride last week, a safety operator took control once during the trip and steered the car in the parking lot.

Aptiv said it plans by midyear to begin testing a newly built vehicle system with backup functions for braking, steering and computing that can manage the car without a person at the wheel. By next year, it hopes to deploy a fully driverless car.

The road to deployment will be costly. General Motors Co.’s self-driving unit, GM Cruise, raised about $5 billion in committed capital last year from SoftBank Group Corp. and Honda Motor Co. for the development and deployment of its commercial taxi service.

Kyle Vogt, Cruise’s chief technology officer, reiterated in an interview in Las Vegas last week that the company is on track to deploy the service without a human behind the wheel this year. But he also called for more reasoned discussions about the technology. He joined competitors at CES to mark the creation of an industry group dubbed PAVE, or Partners for Automated Vehicle Education, that aims to educate the public about the technology.

“I think 2019 will hopefully see the first signs of this technology being real,” he said. “I hope those initial launches manage to reset expectations.”

Write to Tim Higgins at Tim.Higgins@WSJ.com