Proofs Without Words and Beyond - Introduction

In the words of Lynn Arthur Steen, co-editor of the MAA's Mathematics Magazine with J. Arthur Seebach in 1976, when the original "Proofs Without Words" column premiered in that journal [Steen]. (Here, "Steen" links to a "knowl": more about knowls.)

As a teacher, I often urged students to remember geometric diagrams that encapsulate the essence of key mathematical relationships or theorems. For most people, visual memory is more powerful than linear memory of steps in a proof. Moreover, the various relationships embedded on [sic] a good diagram represent real mathematics awaiting recognition and verbalization. So as a device to help students learn and remember mathematics, proofs without words are often more accurate than (mis-remembered) proofs with words.

Here are the first two Proofs Without Words (PWW) as they appeared in Mathematics Magazine in September of 1975: 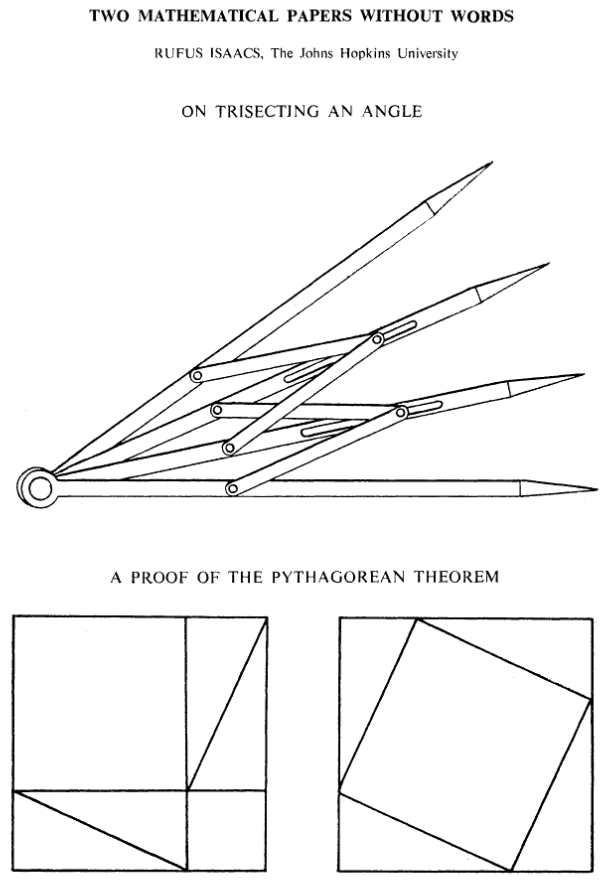 Visual proofs enjoy a long history, going from some of the earliest recorded mathematical writings through to the Proofs Without Words column that first appeared in Mathematics Magazine (and as of 2012 also in The College Mathematics Journal). Based on the increasing frequency of appearance of these visual proofs in both journals, the popularity of these mathematical artifacts is on the rise.

Proofs, especially proofs in the Euclidean tradition of geometry, often include a full verbalization of the argument as well as a figure that serves to illustrate the key points in the argument and make the logic easier to follow. We use the term "diagram" to refer to a figure that serves as a supplement to a verbally expressed proof. A diagram illustrates a point, a point that is made in language. We use the term "visual proof" to refer to a figure if it expresses mathematical argument or evidence with little or no explanatory text. A visual proof doesn't just illustrate a point, it actually makes the point. We tend to regard the ideal visual proof to be one where very little text occurs. Labels strike us as more in the spirit of visual proof than sentences, but we do not intend to offer a strict classification of degrees of purity for visual proof. For our purposes, a Proof Without Words or a PWW is a figure that has been published in the Proof Without Words feature of either Mathematics Magazine or The College Mathematics Journal. We note that it does not follow that all PWWs are visual proofs. However, we consider all of the PWWs that we discuss at length in this article to be visual proofs.

The top half of Figure 1 is a device for trisecting an angle that was first proposed by Laisant in 1875 [Yates]. The knowledgeable reader may note that the bottom half of Figure 1 that stands as proof of the Pythagorean Theorem in Isaacs' original contribution dates back at least to the ancient Chinese mathematical text, Zhou Bi Suan Jing (c. 200 BCE) [Boyer]. We note that in Zhou Bi Suan Jing this figure was accompanied by explanatory text [Katz]. Hence, as it originally appeared, the figure was a diagram, not a visual proof, and certainly not a proof without words! As such we acknowledge Isaacs' contribution, in this case, as recognizing the diagram's ability to convincingly convey a mathematical result with little or no explanatory text. A further discussion of this kind of contribution as well as an example of the rich history that often accompanies visual proofs follows Siu's Sum of Squares PWW at the end of the Proof Without Words 2.0 section.

The PWWs mentioned in this article are cited by their appearance in Mathematics Magazine. We note that the people named in these attributions may not be the original authors of the figures. Rufus Isaacs, for example, passed away in 1981. We may never know where he first encountered the two PWWs that he contributed, but he believed that these two figures expressed, without words, certain mathematical truths. In other words, he recognized them as visual proofs and offered them as such. The authors of the PWWs cited here deserve credit for creating and/or recognizing figures that can stand on their own as visual proofs. It is in this spirit that we cite the contributors of the PWWs to Mathematics Magazine throughout this article rather than attempting to attribute the PWWs to the originators of the figures employed in the PWWs.

While PWWs have enjoyed broad appreciation as pedagogical devices and recreational puzzles, there remains a natural and straightforward question related to PWWs: Are "Proofs Without Words" really proofs? The answer, on the other hand, is not straightforward. While we do not pretend to provide a definitive answer to this question, we do shed light on the meaning of 'proof' and the ways it might apply to PWWs. We do this in the subsequent sections by examining the received Euclidean conception of proof and the views of Gottlob Frege (1848-1925)—one of the most influential philosophers of mathematics—and applying his ideas in the discussion of specific PWWs.

The rise of ubiquitous computing allows for the extension of traditional PWWs to interactive PWWs. For example, here is an interactive version of Charles Gallant's 1977 PWW "A Truly Geometric Inequality" rendered using the free, open-source, javascript library JSXGraph. To interact with the figure, grab the point on the diameter of the semi-circle with your mouse and move it around. We will return to discuss this and other interactive PWWs at much greater length in the final section.

Figure 2. A Proof Without Words 2.0. This figure is an interactive adaptation of Charles Gallant's original "Proof Without Words: A Truly Geometric Inequality." Move the black point left and right along the base to see different configurations.

In this article, we discuss the history and philosophy of visual proofs—also known as "Proofs Without Words" or PWWs for short. We also propose a new regular feature of the Convergence online journal that would provide a peer-reviewed venue for computer-based PWWs that we dub "Proofs Without Words 2.0" (PWWs 2.0).

As in the Gallant example, we employ freely available tools to create PWWs. The PWWs 2.0 presented here are extensions of PWWs that have been published in Mathematics Magazine. We claim that these computer-based, interactive PWWs are more general and provide more insight to readers than their static counterparts. We also encourage readers to develop their own PWWs 2.0 and to submit them for publication in Convergence.