By Murat
13 - 16 minutes
Crashes happen. In fact they occur so commonly that they are classified as anticipated faults. In a large cluster of several hundred machines, you will have one node crashing every couple of hours. Unfortunately, as this paper shows, we are still not very competent at handling crash failures.

This paper from 2018 presents a comprehensive empirical study of 103 crash recovery bugs from 4 popular open-source distributed systems: ZooKeeper, Hadoop MapReduce, Cassandra, and HBase. For all the studied bugs, they analyze their root causes, triggering conditions, bug impacts and fixing.

So it seems that for 85 out of 103 bugs (excluding the 17 bugs from Finding 1) state-inconsistency across nodes is the culprit. I don't want to be the guy who always plugs "invariant-based design" but, come on... Invariant-based design is what we need here to prevent the problems that arose from operational reasoning. In operational reasoning, you start with a "happy path", and then you try to figure out "what could go wrong?" and how to prevent them. Of course, you always fall short in that enumeration of problem scenarios and overlook corner cases, race conditions, and cascading failures. In contrast, invariant-based reasoning focuses on "what needs to go right?" and how to ensure this properties as invariants of your system at all times. Invariant-based reasoning takes a principled state-based rather than operation/execution-based view of your system. To attain invariant-based reasoning, we specify safety and liveness properties for our models. Safety properties specify "what the system is allowed to do" and ensures "nothing bad happens". For example, at all times, all committed data is present and correct. Liveness properties specify "what the system should eventually do" and ensures "something good eventually happens". For example, whenever the system receives a request, it must eventually respond to that request.

Here is another argument for using invariant-based design, and as an  example, you can check my post on the two-phase commit protocol.

1. Why is this not a solved problem? The crash faults have been with us for a long time. They have become even more relevant with the advent of containers in cloud computing, which may be shutdown or migrated for resource management purposes. If so, why are we still not very competent at handling crash-recovery?

It even seems like we have some tool support as well. There are a lot of write-ahead-logging available to deal with the bugs in Finding 1 related to backing up in-memory data. (Well, that is assuming you have a good grasp on which data are important to backup via write-ahead-logging.) We can use ZooKeeper for keeping configuration information, so that the nodes involved don't have differing opinions about which node is down. While keeping the configuration in ZooKeeper helps alleviate some of the state-inconsistency problems, we still need invariant-based design (and model-checking the protocol) to make sure the protocol does not suffer from state-inconsistency problems.

This is a sincere question, and not a covert way to suggest that developers are being sloppy. I know better than that and I have a lot of respect for the developers. That means the problem is more sticky hairy at the implementation level, and our high-level abstractions are leaking. There has been relevant work "On the complexity of crafting crash-consistent applications" in OSDI'14. There is also recent followup work on "Protocol-Aware Recovery for Consensus-Based Distributed Storage" which I like to read soon.

Finally, John Ousterhout had work on write-ahead-logging and recovery in in-memory systems as part of RamCloud project, and I should check recent work from that group.

2. How does this relate to crash-only software?

It is unfortunate that the crash-only software paper has not been cited and discussed by this paper, because I think crash-only software suggested a good, albeit radical, way to handle crash-recovery. As the findings in this paper show a big part of the reason the bugs occur is because the crash-recovery paths are not exercised/tested enough during development and even normal use. The "crash only software" work had the insight to exercise crashes as part of normal use: "Since crashes are unavoidable, software must be at least as well prepared for a crash as it is for a clean shutdown. But then --in the spirit of Occam's Razor-- if software is crash-safe, why support additional, non-crash mechanisms for shutting down? A crash-only system makes it affordable to transform every detected failure into component-level crashes; this leads to a simple fault model, and components only need to know how to recover from one type of failure."

3. How does this compare with TaxDC paper?

The TaxDC paper studied distributed coordination (DC) bugs in the cloud and showed that more than 60% of DC bugs are triggered by a single untimely message delivery that commits order violation or atomicity violation, with regard to other messages or computation. (Figure 1 shows possible triggering patterns.) While this claim sounds like a very striking and surprising finding, it is actually straightforward. What is a DC bug? It is a manifestation of state inconsistency across processes. What makes the state inconsistency into a bug? A communication/message-exchange between the two inconsistent processes. Compared to the TaxDC paper, this paper focuses on a small set of bugs, only the crash-recovery bugs. In comparison to the TaxDC paper, the paper states that crash recovery bugs are more likely to cause fatal failures than DC bugs. In contrast to 17% of DC bugs, a whopping 38% of the crash-recovery bugs caused additional node downtimes, including cluster out of service and unavailable nodes. 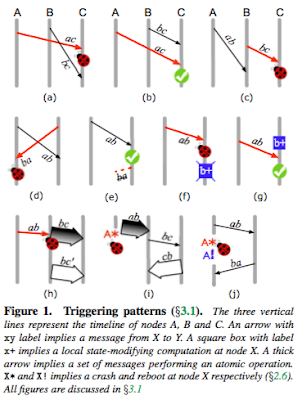