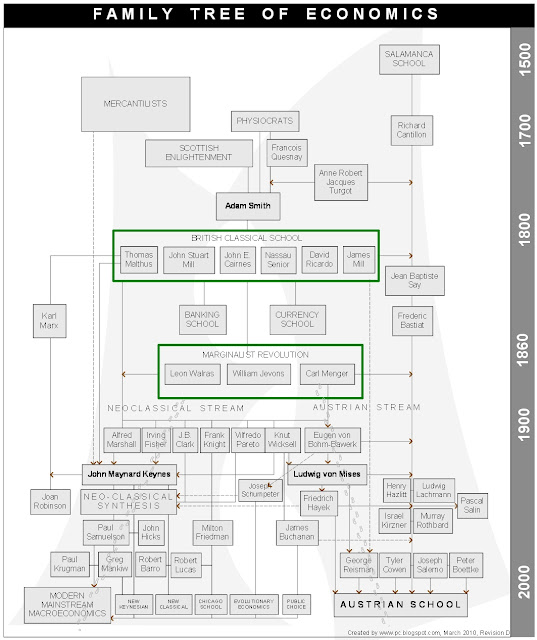 I couldn’t find a decent one, so I produced my own.  Here’s a first third fourth fifth draft.  Comments?

UPDATE 1: Thanks for your comments.  A few improvements made.  Any more to make?

UPDATE 2: Thanks again.  A few additions, and few more corrections made.  What do you think?  A little too busy now, perhaps?

UPDATE 3: Okay, this latest version has a lot more changes.  And it’s a lot more busy. I think I need to start cutting . . .

UPDATE 4:  Now we're really  getting there.

I think this is a vast improvement on the last version, which was losing most of the clarity. You’ll note, among other things, that there are two general streams of thought emerging out of history—one of which, with some exceptions, is largely ignored by the mainstream—and the other of which is largely in praise of big government.

That the last time there was general agreement was back just after the Marginalist Revolution, around the turn of the last century, out of which ‘progressive’ era all the various fragmented schools of today really emerged.

That many things (both good and bad) began with Knut Wicksell.

That there was economics (both good and bad) before Adam Smith.

You might note too the profound distance between the two Britons Philip Wicksteed and Alfred Marshall over the direction of the Marginalist Revolution—a distance measured both by their separation in the chart and reflected in Wicksteed’s (correct) assertion that Marshall and his followers were insufficiently aware of how radical that revolution was, making them little more than “a school of apologists” for the failures of the classical school to construct a valid theory of value.

That there’s really no such thing as a  “neo-liberal” school—a “school” which exists only the minds of Susan St John, Jane Kelsey and their fellow travellers.

That for some decades after the British Classical School codified the study of economics, Karl Marx’s version of their work virtually had the English-speaking world to itself—which explains a lot--but his influence in economics a century later was less so than it was in other fields.

That until recently mainstream economics took very little from the seminal stream of Austrian thought, except what the “Neo-Classicists” took from Hayek and (the partial-Austrian) Schumpeter.

That there is a direct line forward from Carl Menger (“the true and sole founder of Austrian economics proper”) through Eugen von Böhm-Bawerk and Ludwig Von Mises to Mises's student George Reisman; and from Reisman back to the many valid but now-forgotten ideas of the Classical School—and an indirect line back from John Maynard Keynes back to the the unsound and misbegotten fallacies of Malthus and the mercantilists, and forward to the ‘Neo-Classical Synthesis’ that institutionalised those errors and wrote them into a generation's worth of textbooks. . .

So it’s getting there.  Mind you, it’s still not perfect. I haven’t included all the economists who feature on the various ’ten most influential economists’ lists of all-time, or even of the twentieth-century. And I’m now under heavy pressure from Will Wilkinson and a couple of others to add the New Institutional School . . . even though I have got Ronald Coase in there.  At the moment.

Rest assured that I’ll be speaking to a historian of economic thought on Wednesday—as you do—to get some more perspective, and to get firmly upbraided for my errors.

UPDATE 5:  The new, improved and final version is now posted above {click to enlarge).  There's a link to download a full-size version just to the right of this on the main idebar.  Please feel free to use as you will, just as long as you mention that it originated here.  And feel free to drop me a line telling me where it's ended up.