DAN64, an AVR based 8-bit microcomputer

This is my first serious attempt to learn electronics. DAN64 is my first project and it has been a discovery process during 3 months of my free time. I had to learn a lot of things I didn’t know much about, from basic electronics to the details of the AVRs -and specifically the ATmega328-, and a whole world of things in between such as signalling, protocols, interfaces, modulation and demodulation, SDKs, EDA software, prototyping, PCB fabrication, etc.

I’m certain that in this project I’m doing many stupid things and I’m sure my approach to solving some of the problems is not the best, but in my discharge I can only say: it works! (to some extent at least).

I got lots of gotcha! moments, ups and downs where I though I couldn’t finish the project because perhaps what I was trying to achieve was just impossible.

So this is not about perfection but about good enough for me and about the learning process and having fun.

The term “8-bit microcomputer” might not be clear enough. What I meant with it is that I wanted to build a computer like the ones I grew up in the 80s, the ZX Spectrum, the Commodore 64 or the Amstrad CPC.

It will be a single board computer capable of input using a keyboard, output to a screen, and able to load external programs and run them. It should be possible to use the computer to write new programs that could be saved to be loaded and run at a later time.

So basically: an 8-bit microcomputer.

I’ve used the Arduino Uno R3 as development board so the target platform for the microcomputer is the ATmega328, a popular 8-bit microcontroller in the AVR family manufactured by Atmel.

The AVR family implements a modified Harvard architecture. The main characteristic is that code and data are accessed using different buses. The microcontroller (MCU from now on) includes different types of purpose specific memory:

So my requirement of “load and run programs” is not trivial to achieve in a Harvard architecture because the flash memory is not easy to rewrite, so I explored two options based on the idea that I could load the programs as data and make the native code in the flash “interpret” that data:

A microcomputer without software is not very useful but I didn’t feel like writing much software myself using my own dialect of Basic or Forth so I decided to implement a virtual machine, specially because there was the option to use a cross compiler.

I finally went with the MOS 6502, for several reasons. Partly because it seemed to me simpler than the other contenders (as in simpler to implement), it is an 8-bit CPU (the AVR is 8-bit too), and there are a lot of resources and documentation really useful to build simulators.

I split the project in several modules and started working on them one by one, incrementally, so I had a working prototype with both hardware and software almost all the time.

Early on in the process I decided that I needed a way to document the hardware design so I did some research and experimented with different EDA software for Linux, deciding finally that KiCad was the best package for my needs.

It was hard to learn KiCad on the go, but at the end it was very useful when I had to try and test new ideas without losing a working design.

When I started the project I didn’t know what was possible and what was not so I kept my spec simple and as open as I could. In some cases I managed to do more than I was hoping and in others my expectations were too high, so let’s take a look at the features I built into the microcomputer.

Current version of the project has the following features:

The core of the design is the video generation, as it often was in 80s microcomputers’ designs. The video is generated by bit-banging, so first of all speed is important.

I did some experiments using the SPI interface, nothing new and probably one of the simplest ways of getting the required speed. Once I was happy with the quality of the output, the next problem to solve was the memory. In the final microcomputer 6144 bytes of video RAM are used (this is 256 x 192 pixels, 1 bit per pixel). That’s definitely too much for the ATmega328p and its 2048 bytes of internal SRAM.

If only text modes were supported, the memory usage could be reduced to 768 bytes (32 x 24 characters using a 8 x 8 pixels font), but I wanted to support graphics and user defined characters (tiles).

Then I found the Microchip 23LCV512, a 64KB SPI SRAM. In my original idea I was planning to use a 32KB memory IC to store programs and somehow generate the video, but the 23LCV512 has the interesting property of being able to operate at 5 volts, so that’s the main reason the microcomputer is called DAN64.

Because the external SRAM is used for both video memory and to store programs, this is the main bottleneck of the design as the memory can be only used by the 6502 virtual machine when is not actively used by the video output.

Most of the success and the flaws of the microcomputer are directly derived from this design.

The memory layout is as follows:

The terms zero page and stack are related to the 6502 virtual machine.

The virtual machine is pretty straightforward. I used the wonderful 6502 functional tests by Klaus Dormann to validate the virtual machine and the CC65 compiler suite (assembler and C compiler) to write some programs.

The two first pages of memory are implemented with internal SRAM of the MCU to speed up the VM execution. The code the C compiler generates is still slow though, specially using the CC65’s standard C library.

The virtual machine provides a special instruction SYS (opcode 0x02) to expose some services. The service is specified in the accumulator (that will hold the result of the call), and the 6502 stack is used to pass parameters.

C programs can use the VM services (see cc65/include/d64.h) and the generated binaries are almost as fast as manually written assembler code.

Refer to the manual in the downloads section for further details about the different services.

Because I wanted to build a 8-bit microcomputer in 80s style, I thought loading and storing programs encoded as audio would be quite nice.

DAN64 uses a variant of PSK to encode the programs. The data block starts with a sync pulse followed by a header that includes a magic number, the block length and a parity byte as rudimentary checksum. Then the actual data follows, ending in another parity byte.

I took inspiration from the Commodore 64 and the ZX Spectrum encodings, and the resulting scheme is not too bad (although I didn’t spend to much time searching for limits; so there’s a chance it could be faster). For example 58880 bytes (biggest program to load into RAM), using random data, results in a 4 minutes 32 seconds audio file.

I didn’t use any amplifier so the volume when loading programs must be quite high. I’ve written a encoder tool (see storage/tools/) that can generate a WAV file from a 6502 binary.

The loading process is quite reliable and I’ve loaded quite large programs, including screenshots loaded directly into video memory.

Because a pin change interrupt is used to load programs and it affects the video generation, the video output is disabled during program loading.

Programs can be saved as audio files and loaded back, although volume may need to be adjusted before that and it is not as reliable as loading data generated with the encoder (the encoder uses 16-bit audio at 44100Hz, DAN64 outputs 8-bit audio at 15625Hz).

Save timing is important and it affects video generation so the video output is again disabled when programs are being saved.

You can watch several short videos of the development process in this YouTube playlist.

Click on the images for a full size version. 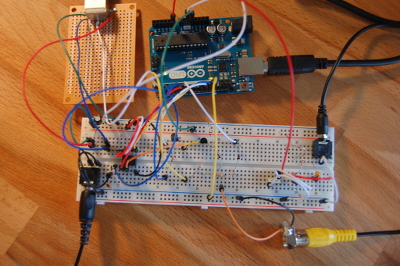 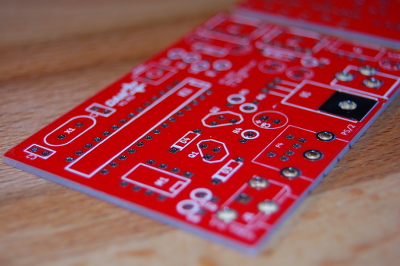 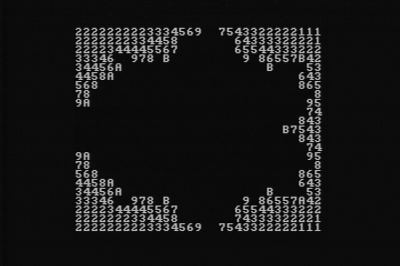 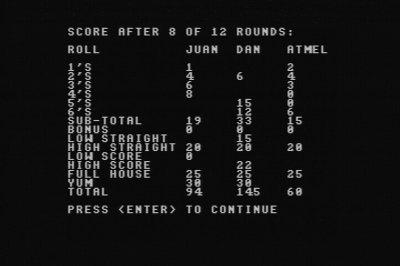 The DAN64 screenshots were taken using VLC and a composite video capture card.

Unless stated otherwise all the software is MIT licensed (see LICENSE file for further details).

The schematics and the build instructions are distributed under CERN OHL 1.2 terms (see cern_ohl_v_1_2.txt for further details).

The microcomputer can be assembled on a breadboard with a regular Arduino Uno.

The hardware is considered “final” and I don’t plan more revisions.

Bug fixes and pull requests to improve the software are welcome. The project is currently hosted at GitHub.