How tech baffled an elderly Congress 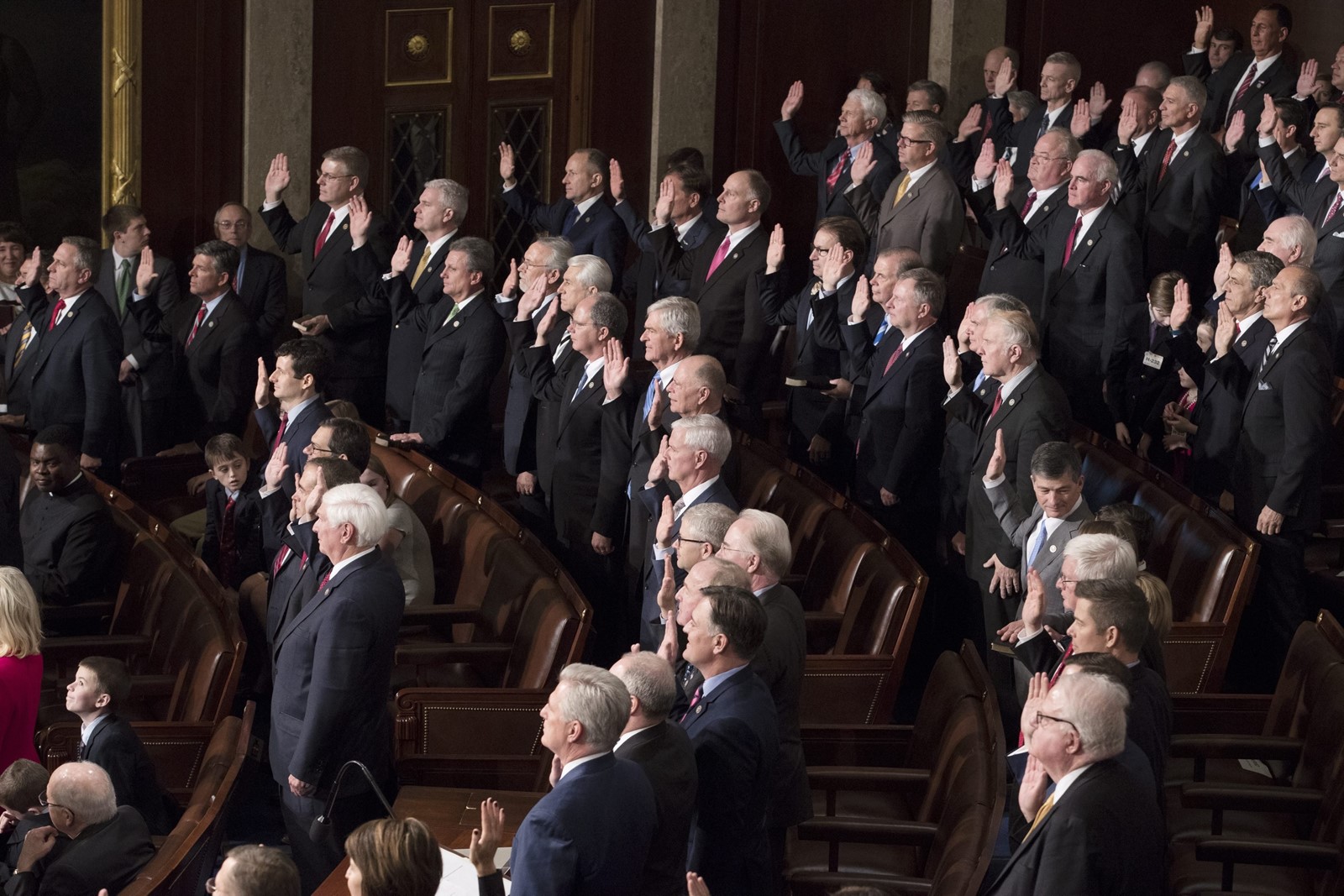 Members of the 115th Congress — one of the oldest sessions in history — are sworn into office in January 2017. (MICHAEL REYNOLDS/EPA )

If you’re trying to recall what your members of Congress accomplished in 2018, the answer is: They grew older.

The 115th Congress was already one of the oldest in history when it convened at the dawn of the Trump administration — average age 58 in the House, 62 in the Senate. By the time the 115th hobbled into extinction at the end of 2018, artifacts from its attempts to engage the younger folk and their digital ways lay strewn across the internet like the fossil record of an obsolete species.

There were the agonizing video clips from April’s Facebook hearing, in which 68-year-old Sen. Roy Blunt, R-Mo., attempted to ask Facebook Chief Executive Mark Zuckerberg a question about data privacy, and revealed a conception of social media resembling a wad of tangled Christmas lights: “Do you track devices that an individual who uses Facebook has that is connected to the device that they use for their Facebook connection, but not necessarily connected to Facebook?”

“I’m not — I’m not sure of the answer to that question,” Zuckerberg replied, as if he could even be sure it was a question.

Come December it was Google chief Sundar Pichai’s turn to visit the Capitol and watch Rep. Steve Cohen, the 69-year-old Democrat from Tennessee, wave his hands in the air and complain: “I use your apparatus often, or your search engine, and I don’t understand all of the different ways that you can turn off the locations. There’s so many different things!”

These hearings were live-streamed to the general populace, more than half of whom are under 40, many of whom were horrified to discover that a country being revolutionized by technology is apparently overseen by people whose worldview calcified in the previous century.

Less surprised, but no less dismayed, were some of the tech advocates who have spent years trying to discuss issues such as net neutrality and data privacy on Capitol Hill with representatives and staffers they say are somewhat less than engaged.

“There’s different eras where people come from. It’s hard to transcend that,” said Daniel Schuman, a former Hill staffer who works for a tech-oriented lobbying group, Demand Progress. “It’s like ‘Mad Men.’ You’ve got the secretary who does the typing and the librarian who does the research. Lindsey Graham was bragging about having a flip phone!”

Zach Graves, who regularly commutes between Silicon Valley and D.C. for his work at a free-market tech advocacy group called the Lincoln Network, has been wincing through congressional tech hearings since long before the Google and Facebook spectacles became viral dark comedy.

“There’s lot of run-of-the-mill hearings where that’s about par for the course,” he said. “It’s clear from the kinds of questions they were asking they weren’t prepped properly.”

In particular he remembers the House Agriculture Committee’s attempt to take on cryptocurrency. Premised on the possibility that bitcoins might fall into the same regulatory category as soybeans and corn, July’s hearing opened with a panel of technologists trying to explain blockchain technology.

A CEO with purple-dyed hair made a particularly diligent effort to connect with the Congress members. “Email allows you to send a digital version of a birthday card to a grandchild instantly,” she wrote in her prepared statement. “Cryptocurrency like bitcoin gives you the ability to put the digital equivalent of $10 inside that card.”

But the generational chasm became apparent when the 74-year-old ranking Democrat, Rep. Collin Peterson of Minnesota, took the microphone and announced, “Um. I don’t know where to start.” He explained that he was still uncomfortable with President Franklin Roosevelt’s decision to abolish the gold standard in 1933, and liked this new idea no better. “They’re just creating this money out of nowhere!” he said.

“The problem you’re having is you DON’T UNDERSTAND TECHNOLOGY YOU 8-track listening fools,” countered one of several hundred cryptocurrency enthusiasts watching the proceedings live on YouTube.

There is a counterargument to this criticism, which issues from the offices of the lawmakers themselves. Sen. Orrin Hatch, R.-Utah, who left office Thursday at age 84, was pilloried during April’s Facebook hearings for asking Zuckerberg: “How do you sustain a business model in which users don’t pay for your service?”

“Senator, we run ads,” Zuckerberg replied, smiling cherubically, and video of this exchange instantly became a viral emblem for a doddering Congress.

This annoyed Hatch’s communication director, Matt Whitlock, who pointed out that the senator had spoken at length about Facebook’s advertiser-based business model minutes earlier, and asked his infamous question semi-rhetorically, to have Zuckerberg confirm it.

“Senator Hatch has some of the most tech-literate staff on Capitol Hill and has authored more tech legislation than anyone,” Whitlock wrote to The Washington Post. “But he became a meme of tech illiteracy because so many reporters only saw a 12-second video in their Twitter feeds, not the three minutes preceding it.

Most Americans (at least the white male ones) had not yet seen their 15th birthday before the first census in 1790, but were governed by a 1st Congress in which the average senator was 47 years old, according to the U.S. Senate Historical Office.

The average age in the Senate has ticked up steadily along with that of the population, as it has in the House since at least the 1940s, when Congressional Quarterly began keeping track of ages in the lower chamber.

We don’t yet have comprehensive age data for the next Congress, but it convened this week after an election that added a historic number of minorities, women and young people to government. The midterm election quintupled the number of millennials who will hold a House seat, according to the Pew Research Center, though they still make up a paltry share, with just over two dozen seats.

“The age difference is a huge disparity. My friends and I had talked about forever,” said Katie Hill, 31, who unseated a Republican incumbent in California’s 25th district last month by campaigning partly on generational issues — not so much technology as college debt, health care reform and climate change.

The technology helps, though. Hill said she and a handful of other under-40s elected in November have befriended each other as they prepare to move into their new offices. They chat mostly through text.