The Chytridiomycota, often called chytrids, are unique among all fungi in having motile stages in their life cycles; no other fungi have this trait. These motile stages take the form of zoospores, single cells with a single posterior (at the rear) flagellum. Obviously these sperm-like cells require water and it is thus not surprising that chytrids live in perminantly or temporarily aquatic habitats. 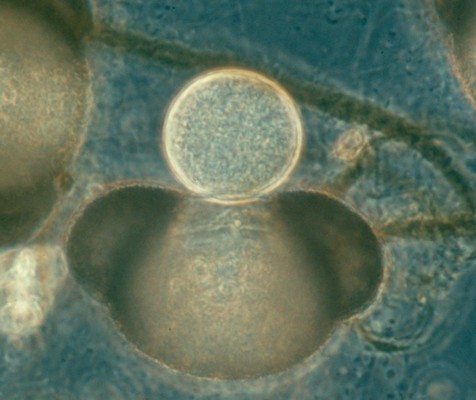 Most chytrids are structually fairly simple. For example, the photo at left shows a species of the chytrid genus Rhizophidium growing on the surface of a grain of pine pollen. The organism is perfectly spherical and attached to the pollen grain by tiny (invisible here) threads extended into the interior of the pollen grain. These threads, called rhizoids, not only anchor the fungus to the pollen but also serve in nutrient absorption. What you see here is the whole organism; there is no more and it will get no more complex. The interior of the chytrid appears granular in this picture because the cell is beginning to convert itself into a sporangium filled with zoospores. During asexual reproduction the zoospores will simply swim away in search of new pollen grains where they will attach and form new chytrids. Thus in the spring, when masses of pine pollen fall into a lake, the entire mass will become colonized by chytrids within a short time. This can happen because a single chytrid can produce enough spores to colonize several new grains, and each of these will go on to colonize even more according to a haphazard but effective mathematical progression.

As the pollen season draws to an end the chytrids, if they are confined to consuming pollen, have a long wait for their next feast. What is needed is a resting stage, and this usually involves sexual reproduction. Sexual reproduction in a simple chytrid like Rhizophidium varies from species to species. In some the sporangium produces structures similar to the asexual zoospores, but these are able to locate and fuse with one from another sporangium to form a diploid zygote. The zygote becomes thick-walled and is able to withstand long periods of dormancy. In some cases one of the chytrids remains attached to its substrate and only one of the two mating individuals is motile. The fertilized individual becomes thick-walled and is again restistant to off-season stresses.

The affinity of many chytrids for pollen makes them easy to collect and observe. If you wish to try this take a dish of water from a natural source, sprinkle it very lightly with pollen and cover it. Within a few days your pollen will be well colonized by chytrids. Most mycologists used pine or fir pollen beacuse it is very easy to collect in large amounts in the spring. In addition, pine pollen grains have little sacks on their "shoulders" that cause them to float, a convenient attribute when you are trying to observe them. If you find some water that already has pollen floating in it, you can rest assured that this pollen is already well colonized.

Chytrids do not only grow on pollen grains. They can frequently be found on algae and Oomycota as well. 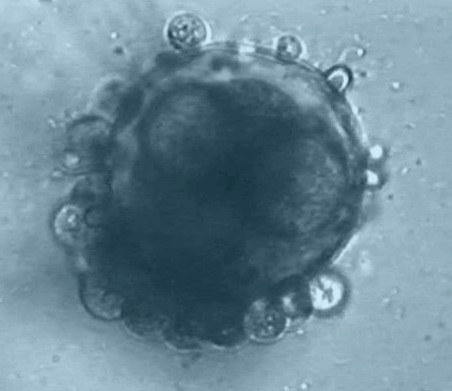 In the two pictures at right we see oogonia of a species of Achlya covered with chytrid sporangia. The large sphere in each picture is the oogonium and the many small spheres attached to its surface are the chytrids. The picture furthest to the right was taken straight down on the oogonium and does not show its stalk, but you can clearly see that some of the chytrids are starting to produce zoospores and the oogonium itself has produced oospores.

Other chytrid habitats include a variety of invertebrate animals and protozoans. One of the most remarkable of these is Haptoglossa mirabilis a chytrid that uses a cannon-like cell to fire a harpoon into the cuticle of its invertebrate hosts. Dr. George Barron has a wonderfully illustrated account of H. mirabilis on his website. Batrachochytrium dendrobatidis is another parasitic chytrid that has attracted much attention because of its devastating effect on frog populations. See the section on chytridiomycosis on the animal parasites page for a discussion of this important organism.

Chytrids are also active as parasites on plants. Members of the genus Olpidium are common in the roots of many plants where they may cause major distortions of the tissue and ultimately serious damage to the plant. They have also been shown to be important vectors of plant viruses, where the virus may be a more serious cause of disease than the chytrid. 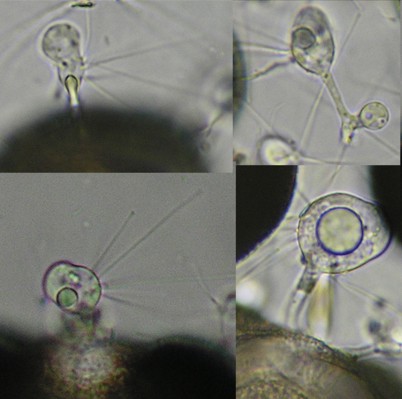 Although chytrids are generally seen in ponds and streams they may also occur in some rather unusual places. Perhaps the most unlikely of these are the chytrids living within the stomachs of certain animals, discussed further in the section on animal mutualisms. Chytrids are also common in soil and other mosit terrestrial habitats and are also present in the sea. In the spring of 2006 a large amount of fir pollen drifted into the sea along the Bay of Fundy, giving rise to large populations of marine chytrids. The photo at left shows four examples of one of these, tentatively identified as Rhizophidium harderi. The one at upper right is interesting because it shows that some chytrids are polycentric, that is they can produce more than one sporangium per individual.