Rudolph W. Giuliani, a former top federal prosecutor, New York City mayor and lawyer to a president, had his law license suspended after a New York court ruled on Thursday that he made “demonstrably false and misleading statements” while fighting the results of the 2020 election on behalf of Donald J. Trump.

The move was a humbling blow to a man who was once known as a law-and-order crusader and whose political ambitions and creative courtroom tactics against mob bosses turned him into a fixture on national television.

The New York State appellate court temporarily suspended Mr. Giuliani’s law license on the recommendation of a disciplinary committee after finding he had sought to mislead judges, lawmakers and the public as he helped shepherd Mr. Trump’s legal challenge to the election results. For months, Mr. Giuliani, who was Mr. Trump’s personal lawyer, had argued without merit that the vote had been rife with fraud and that voting machines had been rigged.

In its 33-page decision, the court said that Mr. Giuliani’s actions represented an “immediate threat” to the public and that he had “directly inflamed” the tensions that led to the Capitol riot in January.

“The seriousness of respondent’s uncontroverted misconduct cannot be overstated. This country is being torn apart by continued attacks on the legitimacy of the 2020 election and of our current president, Joseph R. Biden,” the decision read. 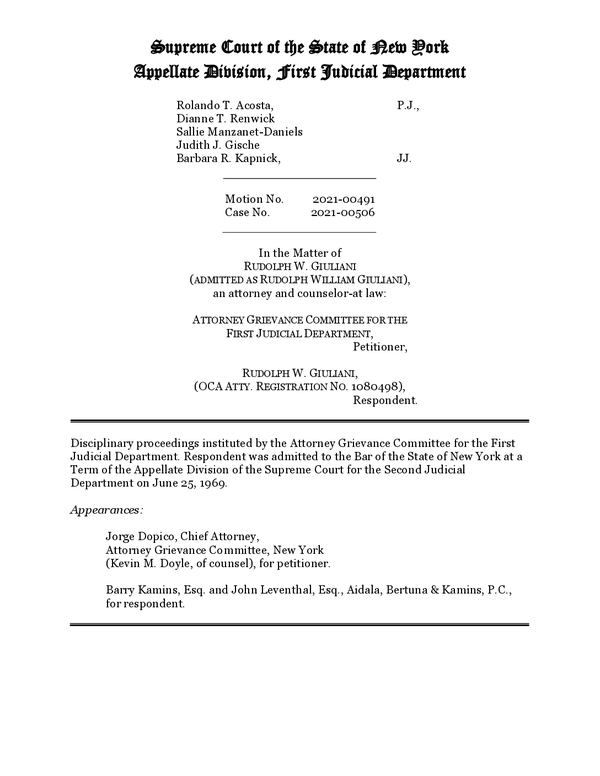 Mr. Giuliani now faces disciplinary proceedings, which are typically closed to the public, and can fight the suspension. But the court said in its decision that he would be likely to face “permanent sanctions” after the proceedings conclude. A final outcome could be months away but could include punishment ranging from a written warning to disbarment.

Mr. Giuliani’s lawyers, John Leventhal and Barry Kamins, said in a statement that they were disappointed that the panel had acted before holding a hearing on the allegations.

“This is unprecedented as we believe that our client does not pose a present danger to the public interest,” they said. “We believe that once the issues are fully explored at a hearing, Mr. Giuliani will be reinstated as a valued member of the legal profession that he has served so well in his many capacities for so many years.”

At least three ethics complaints had been publicly filed against Mr. Giuliani, including one earlier this year by a group of prominent lawyers who accused him of abusing the court system to undermine democracy. It is not known which complaint, if any, triggered the New York court’s investigation.

Mr. Giuliani is also licensed to practice law in Washington, D.C., and the decision in New York could set off disciplinary proceedings there, although that is not automatic.

It is rare for the court to temporarily suspend lawyers for making unethical public statements, according to lawyers who specialize in disciplinary proceedings, and it is more common in cases in which lawyers are accused of stealing money from clients.

The practical impact of the decision was not clear. Although Mr. Giuliani started his own law firm in 2019, it has been decades since he regularly argued in courtrooms. Before Mr. Giuliani became Mr. Trump’s lawyer, he was running his own security consulting business. More recently, he has hosted a radio show and appeared in cigar commercials.

Still, the suspension marked another stunning chapter in the rise and fall of Mr. Giuliani, once a legal and political star. He had enjoyed near-hero status when, as New York City mayor, he led the city through the Sept. 11, 2001, terrorist attacks.

Before that, he was a hard-charging prosecutor who was known for battling organized crime and corrupt politicians. But he is now being investigated by the United States attorney’s office in Manhattan, the same office he once led, and faces the prospect of being banned from the legal profession in which he has worked for more than five decades.

The federal investigation into Mr. Giuliani centers on his dealings in Ukraine before the 2020 election, when he sought to damage President Biden’s credibility. In April, F.B.I. agents seized Mr. Giuliani’s cellphones and computers, an extraordinary action to take against a lawyer for a former president.

Prosecutors have been investigating whether Mr. Giuliani illegally lobbied the Trump administration in 2019 on behalf of Ukrainian officials and oligarchs, who were assisting Mr. Giuliani’s efforts to dig up dirt in Ukraine on Mr. Biden and his son. Mr. Giuliani has denied any wrongdoing.

The New York court’s decision is not related to that investigation but examined Mr. Giuliani’s efforts to overturn the results of the November presidential election.

On Thursday, Mr. Trump defended Mr. Giuliani, saying in a statement that “all of New York is out of control.”

“Can you believe that New York wants to strip Rudy Giuliani, a great American Patriot, of his law license because he has been fighting what has already been proven to be a Fraudulent Election?” Mr. Trump wrote.

From nearly the moment on Election Day when Fox News declared that Mr. Biden had won Arizona, Mr. Giuliani urged Mr. Trump to fight the outcomes in a handful of battleground states. Mr. Trump tapped Mr. Giuliani to lead his legal efforts.

But while Mr. Giuliani repeatedly claimed he could prove widespread fraud in the election, including showing that dead people had cast ballots, he offered no evidence supporting that contention in court. He traveled the country to press his claims with lawmakers in several battleground states.

On Jan. 6, Mr. Giuliani addressed a rally by Trump supporters near the White House ahead of the certification of the Electoral College vote in Congress. Mr. Giuliani told the crowd he sought a “trial by combat.”

A short time later, hundreds of Trump supporters left the rally and swarmed the Capitol, breaking into the building and threatening lawmakers.

In Thursday’s decision, the New York court said that false statements like the ones made by Mr. Giuliani tarnished the reputation of the entire legal profession. Mr. Giuliani’s misconduct “directly inflamed” the tensions that led to the Capitol riot, the court said.

“One only has to look at the ongoing present public discord over the 2020 election, which erupted into violence, insurrection and death on Jan. 6, 2021, at the U.S. Capitol, to understand the extent of the damage that can be done when the public is misled by false information about the elections,” the court wrote.

The court noted, for instance, that Mr. Giuliani repeatedly claimed tens of thousands of underage teenagers had voted illegally in Georgia. An audit by the Georgia Office of the Secretary of State found that no one under the age of 18 had voted in the 2020 election.

But Mr. Giuliani continued to repeat the false claim as recently as April 27 on his radio show, the court said, after a disciplinary committee had already petitioned the court to suspend his law license.

Before the court made its decision, Mr. Giuliani had argued in filings that he presented no threat to the public, promising to exercise “personal discipline” and no longer make any public statements about legal matters related to the 2020 election, the court said in its ruling.

The fallout from Mr. Trump’s efforts to overturn the election has ensnared several members of his legal team. Earlier this year, Dominion Voting Systems, an election technology company, sued Mr. Giuliani and Sidney Powell, another Trump lawyer, accusing them of spreading “a viral disinformation campaign” about the company’s machines manipulating vote tallies.

In the defamation lawsuit against Mr. Giuliani, Dominion is seeking more than $1.3 billion in damages. Mr. Giuliani has called the suit an “act of intimidation by the hate-filled left-wing.”

The suspension of Mr. Giuliani’s law license was not the first time his legal career has suffered from his association with Mr. Trump. In 2018, Mr. Giuliani abruptly resigned from his position as a partner at the law firm Greenberg Traurig, after he clashed with the firm over his public statements in defense of hush-money payments made on Mr. Trump’s behalf to a pornographic film actress.

In summer 2019, he started a law firm called Rudolph W. Giuliani, PLLC. In an interview a few months later, Mr. Giuliani said, “My legal practice is supporting me right now.” He added with a laugh, “It’s not doing really well,” because of the scrutiny surrounding his work for Mr. Trump.

In the interview, Mr. Giuliani said that the firm represented “people like me who are being tortured.”