"If you have ever played a free-to-play game you know that most of them require resources of one type or another to play. Whether it be gems, gold, power ups, or other, these resources are required to advance within the game, making them critical to the game play. Manually gathering the free resources is a slow process and one can play a game for months working to move up levels.

This is where the game makers make their money. They sell resources through “In-App Purchases” to help people play the game and speed up the game play. The lure of speeding up your play is a strong incentive to spend money on resources, and many spend to play. This has turned free-to-play games into a multi-billion dollar industry.

The resources even maintain value after purchase, because in many cases, once bought, they can be traded, adding to the game play.  The game itself can also be transferred from one account to another. Because of this, resources gathered or bought and games built to advanced levels can also be resold.  It is the selling of these on third party markets that holds the door open to the illicit activity that we found taking place.

"Money laundering through the Apple AppStore or Google Play isn’t a new idea and has been done before.  In the 2011 the Danish part of the Apple App Store was flooded with expensive suspicious applications. More than 20 out of 25 of the most downloaded applications were from China. The price of the apps ranged from $50-$100. For example, one of them “LettersTeach”, was intended for children who are learning English letters, yet it cost nearly $78.  This pointed to money laundering then, however, what we encountered now is much more sophisticated.

What did we find?

Following our MongoDB investigations and honey pots deployments from the beginning of this year, we did another round of security audit of unprotected MongoDB instances. In June 2018 we have spotted a strange database publicly exposed to the public internet (no password / login required) along with a large number of credit card numbers and personal information inside.

As we examined the database we rapidly became aware that this was not your ordinary corporate database, this database appeared to belong to credit card thieves (commonly known as carders) and that it was relatively new, only a few months old. So we dug much deeper.

It appeared to be a group of malicious actors with a complex automated system utilizing free-to-play apps, third party game and resource resale websites, and Facebook to launder money from stolen credit cards.

We have detailed the evidence of this active, automated system in a report sent to DOJ. According to our estimation, system processed approximately 20,000 stolen credit cards in just 1.5 months (from the end of April 2018 to mid June 2018).

Here is a simplified view of our findings (click to enlarge): 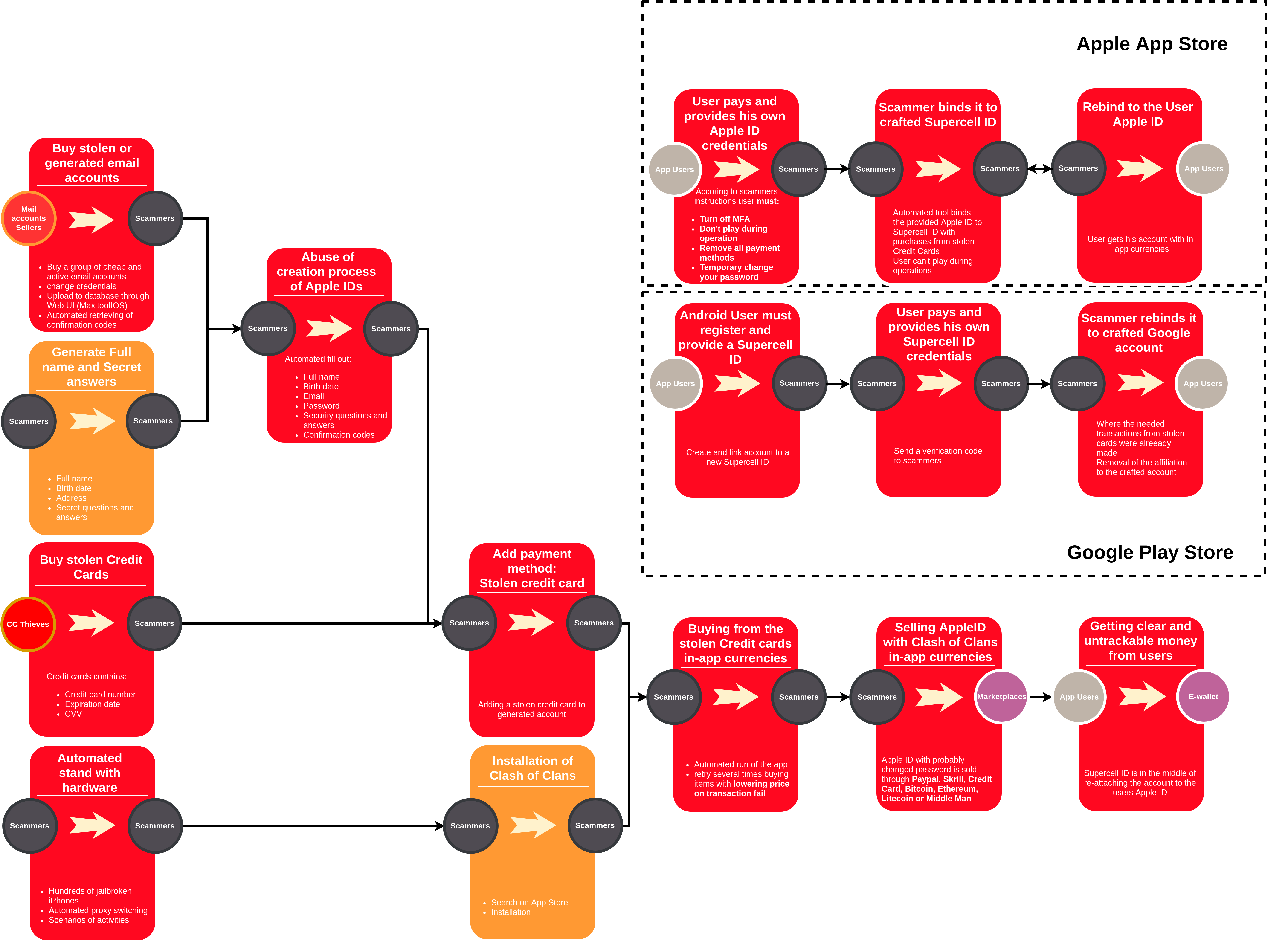 What is the scale?

The credit card thieves we found are currently targeting just three games; two by the game maker Supercell - Clash of Clans and Clash Royale, and one by Kabam - Marvel Contest of Champions.

Below you can see that that just with these three games, there are over 250 million aggregate users, generating approximately $330 million USD a year in revenue.  These three games also have a very active third party market, utilizing sites like g2g.com to buy and sell resources and games.  All of which makes these a good choice to blend in for a little money laundering.

It is interesting to note that these three games are not even in the top five games. Scaling this scheme across other popular apps and games with in-app purchases places the potential market well into the billions of dollars USD per year. 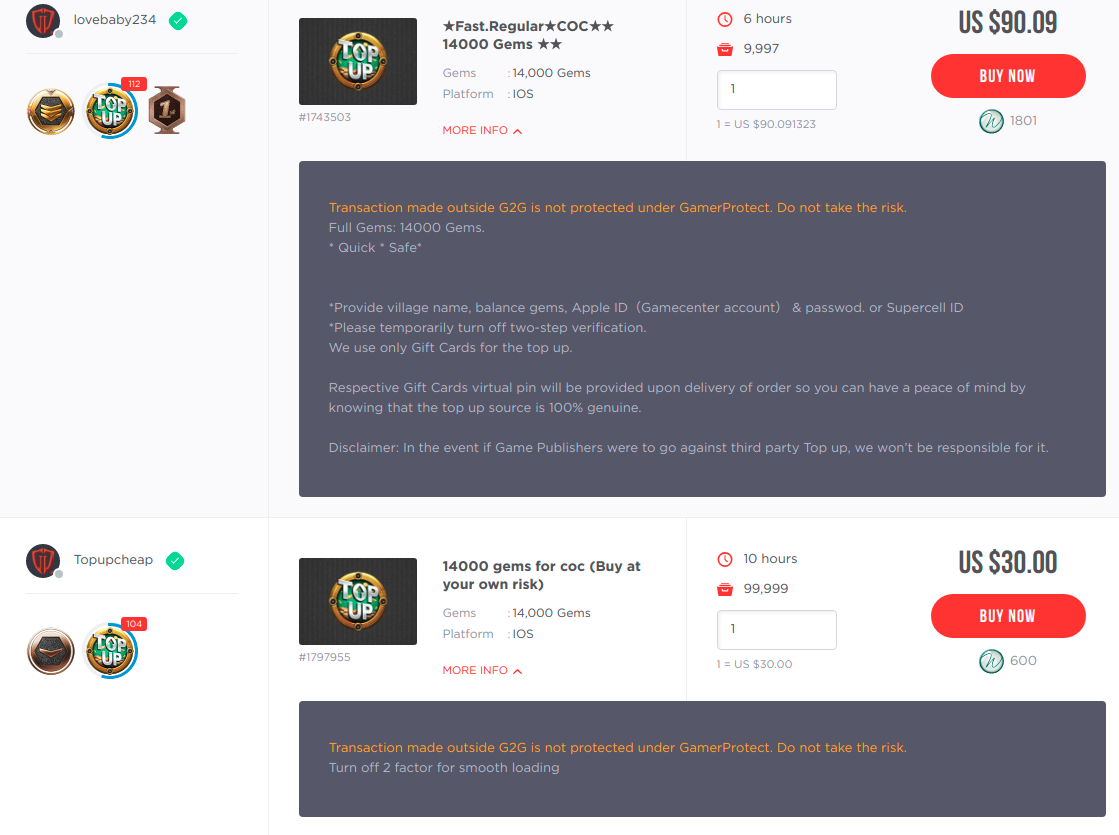 Why is it possible?

It is easy to automatically create accounts on a large scale.

Apple only requires a valid e-mail address, a password, a date of birth, and three security questions to create an Apple ID.  E-mail accounts are also very easy to create with a few providers requiring little in the way of verification. Combined, the carders were able to automate the account creation process, as you’ll see, allowing them to create accounts on a large scale.

The buying, selling, and other legit and non-legit ways of increasing resources are well known.  The companies involved do take a stand against the exploitation of their games and do have policies to ban, but they do not quite go far enough. Supercell, the company behind Clash of Clans and Clash Royale, has the following warning on their site.

Unfortunately, they are only addressing a small part of the overall problem, they should also target:

We have not seen many actions to ban such activities on a large scale.  In fact, on related forums we saw only individual users banned who admitted to buying these gems from unofficial shops.

The ability to rebind your account an unlimited number of times from Apple ID to Supercell ID and back is considered a feature.  It is useful for legitimate changing of accounts, but it also lends itself to the sale of accounts for profit outside the game maker’s control.

Apple ID during and after these transactions are more likely to be completely compromised as most of users have lots of personal info attached to it. That’s why some time is needed after user can encounter ransom cases.

Profiles are configured for work in 5 countries:

One of the main questions we had was “Are these cards valid?”

It’s true that many of the cards were used as a payment method with Apple.  Also that Apple verifies them just after adding. It’s a common operation where they charge $1 to the card then refund it to test if it is valid.

But we needed more evidence…

It’s unethical, not to mention illegal, to purchase something with found credit card data, so we investigated the data set without third parties.   The following is what we found:

So it appears that they have so far used 37,606 credit cards and at the time of investigation had 18,072 cards verified by Apple (successully added to accounts).

They chose email providers with little to no protection against automated account creation. 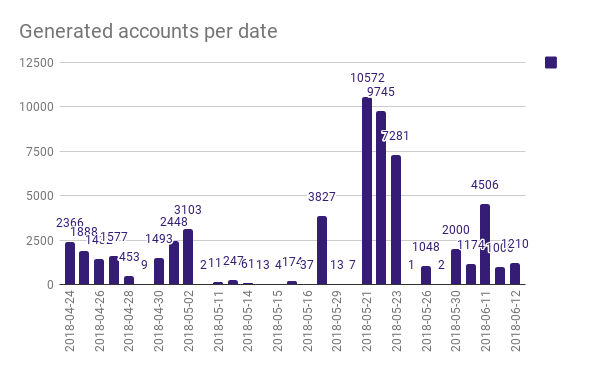 Instructions were found for a way to automatically play and advance Clash of Clans for profit on one of the game automation forums using Racoonbot.

Raccoonbot.com is an automated bot dedicated to Supercell’s Clash of the Clans.  It advertises itself in it’s forum as a way to “Become rich at Clash of the Clans”.  This is done by automating the game and selling the gems. It can potentially be used in conjunction with MaxTooliOS to further enhance the profit from the stolen credit cards.  It’s a direct violation of Supercell policy, it aids in laundering money, and it also remains in operation.

Full copy of this investigation has been sent to Department of Justice. We have been also been in touch with Supercell, but no assistance was received.

Attention - Portions of this article may be used for publication if properly referenced and credit is given to Kromtech Security Center.
Do you have security tips or suggestions? Contact: security@kromtech.com