In March 2002, London was classified as an urban forest by the Forestry Commission. According to official sources, 20% (or ~31,000 hectares) of the area of Greater London is covered by tree canopy.

To do this classification, aerial images were analyzed using the methodology described here. The methodology is based on multiple humans classifying a random sample of the aerial images and subsequent statistical inference based on that sample. The Greater London Authority states towards the end of the document, that "it would be useful to compare the findings produced by random point classification of aerial imagery to more automated methods."

As a data engineer who's especially interested in geospatial data and also really likes forests, I decided to pursue this exact line of research. If you want to follow along fully, check out the project on GitHub.

To explore this further, there is a dataset that we can use: NASA's MOD44B V6 dataset, which is publicly available for download and fits the requirement of having been annotated using automated methods. This dataset is derived from raw satellite images and stored in HDF format.

Each image has information about a part of the Earth. Each pixel in the image represents an area on Earth that is 250m x 250m in size, so it can better be thought of as a polygon on the surface of the Earth rather than a pixel, basically a rectangle. Each rectangle is annotated with metadata - including the percentage of tree cover in the area it covers. Below is the Greater London Area divided in rectangles with an area of 250m x 250m.

The greener the rectangle, the higher the tree cover percentage.

How is the tree cover percentage derived in the NASA dataset?

According to the spec, the tree cover percentage is derived by applying a machine learning algorithm on the dataset. Humans classified a set of training rectangles, however, after that, the classification of the rest of the rectangles was done by an algorithmic model built on the training data. This method is quite different than how the classification was done in the original study by the Greater London Authority, which used humans exclusively.

How can we use this dataset?

The geographic boundary of Greater London is also publicly available and can be downloaded here. 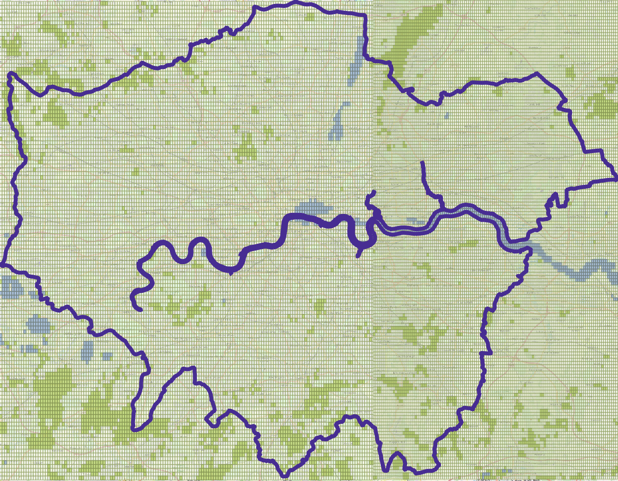 We need to obtain the two datasets (NASA satellite images and the geographic boundary of Greater London) and transform them into a common format so that we can do the intersection. People who want to be creative with multiple data sources, for example, data journalists and data scientists, are faced with this challenge all the time. It's very rare that data from diverse sources is directly comparable.

Our goal is to turn both datasets into longitudes and latitudes. Then, we'll need the right tool to store the data and do the intersection, for which I've decided to use the Postgres database with the PostGIS extension.

To follow the tutorial, you need to check out the code on GitHub, and you also need to have Docker and Docker Compose installed. Please refer to this tutorial for installing Docker and this one for Docker Compose.

I have created a Docker Compose setup that spins up two containers, one with a Postgres database called londonwald with the PostGIS extensions installed, and one with all the necessary Python dependencies installed, which can also access the database container. All you need to do is docker-compose up -d in the project's root level directory, and you'll be set to run all the code that follows.

In order to make Postgres be able to store spatial objects, in addition to what the objects databases usually store (strings, integers, and the like), we are going to use the PostGIS extension. PostGIS also extends the database functionality (joins, groupings, etc.) with functions that can deal specifically with spatial objects (spatial joins, intersection, area calculation, dealing with geometries that use different projections, etc.) that are both straightforward to use and highly optimized behind the scenes.

We're also going to use the Python library of GDAL, the Geospatial Data Abstraction Library, which is the work of many years of research, and contains functionality to process all kinds of geospatial datasets, including HDF files.

All these tools are installed automatically when using the Docker Compose setup, so you don't need to install them manually — doing docker-compose up -d is sufficient.

The NASA website offers satellite image files (in HDF format) for each year.

London, as we can see if we do a bounding box query in the website, spans across two files. To download them from the website, one needs to register. For the purposes of this tutorial, I have downloaded the files for years 2013-2018 in the GitHub repo of this project. To run any of the commands, please set up the containers with docker-compose up -d. The first time may take a while to download all the dependencies.

Now, each HDF file contains a grid with all the 250m x 250m rectangles, and each of these rectangles has values for tree cover percentage.

We have the following three tasks to do:

This is the command to see all the datasets contained in the HDF file:

The output shows that there's seven datasets stored inside the HDF file, of which the tree cover is the first.

We will use the GDAL library to do the heavy lifting for the first two tasks, and for the third one, we will loop over the grid and create polygons to load onto the database. You can run the code to load the forest rectangles onto the Postgres database by doing:

then you can do:

and verify that the forest_boxes table has been populated, by running the SQL query:

What the code does

By running the code that loads the HDF files onto the Postgres database, we execute several steps. The most important ones are outlined here:

First, we create the database table where the rectangles with tree cover information will be stored:

The geometry type is a data type that is supported by Postgres when PostGIS has been installed.

After that, we select the tree cover dataset and reproject it to use longitudes and latitudes:

Now, we extract the metadata from the dataset to know the width and height of the rectangles, how many there are, and what longitude and latitude the top left rectangle corresponds to:

Afterwards, we connect to the database and prepare the statement to insert each rectangle geometry:

Finally, we loop through the grid of rectangles, create the descriptions of them in terms of their four corners (longitude, latitude pairs) using the well known text (WKT) format and insert them into the database in batches:

I've downloaded the London shapefiles from here and used shp2pgsql, a handy tool that can turn shapefiles into a postgres table. To simplify the tutorial, I have already done this conversion, and the resulting SQL file from processing statistical-gis-boundaries-london/ESRI/London_Borough_Excluding_MHW.shp can be found on GitHub.

Please keep in mind that the polygons of the boroughs are not yet converted into longitudes and latitudes in this file, instead, the projection of the British National Grid(WKID:27700) is being used.

We can then load the table onto Postgres:

Now we have all the boroughs of the Greater London Area loaded, which is a bit more detail than we actually need.

What we actually want is the entire area as a polygon. PostGIS offers two functions that can support us: ST_Union, which can stitch together geometries into one by dissolving their boundaries, and ST_Transform, which can reproject a geometry to a different projection ID (in our case, 4326, which corresponds to longitudes and latitudes). With a simple query, we can create the Greater London area as a geometry in a new table named greaterlondon (that has just one row): 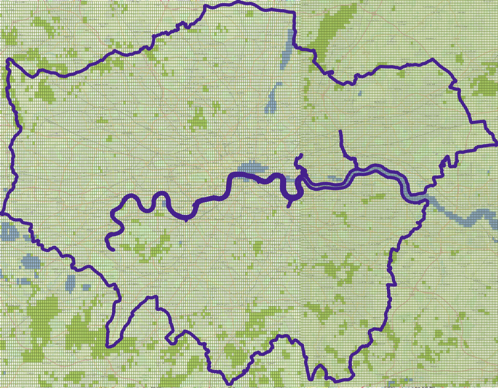 Now that the rectangles with the tree cover information and the boundary area are in the same format and in the same database, the question can be answered with one SQL query.

This is how we get the tree cover area in hectares for the year 2013, with a little help from the custom PostGIS functions ST_Intersection, ST_Intersects, and ST_Area.

We multiply the tree cover of each rectangle that intersects the Greater London Area, with the area of said intersection. When geometries are cast as ::geographies, the ST_Area function conveniently returns the result into square meters.

To do that, connect to the database by doing docker-compose exec python3-container psql and run this query:

The result is 30,900 hectares, which is very close to the 31,000 hectares reported by the original study. The original study was also based on imagery captured in a different time of the year in 2013 than when the NASA satellite images were captured on the same year, that is, with possible differences in how green the leaves and the grass looked. That we are so close to the exact number reported is a great result!

We answered the question of the percentage of tree cover in London using a different starting dataset and different methodology, and, happily, we reached a result which is very close to the result of the original study — it does confirm that 20% of the area of Greater London is covered with trees. Along the way, we learned more about the HDF data format, how to do transformations on geometries, and how to use the PostGIS functions to get quick answers about the relationships between them.

We have created a dataset which can have more applications, in addition to helping us classify London as an urban forest. Looking at the distribution of tree cover, for example, per borough, the relevant authorities can decide where to plant more trees. Looking at the evolution of tree cover over time, trends can be discovered. As a rule, what can be measured can be improved.

There's more questions waiting to be asked. The code and datasets (including more years) are available to explore and tinker with on GitHub.