Earlier this summer, one of the F-class shooters in our league was trying to diagnose an issue with his new rifle. He was using a reliable load that he had previous success with, but his chronograph was showing some pretty extreme muzzle velocity variation of around 35 ft/s. Remembering a SnipersHide article I had read about recoil management technique contributing to inconsistent muzzle velocity issues, I suggested that as a possible cause. I went home and found the article, intending to share -- but when I read it again, I noticed some things that made me question the results.

In the article, the author used a chronograph to measure muzzle velocity in a variety of shooting positions, including on a slippery steel bench and prone with a preloaded bipod. The conclusion presented by the author was a bold one:

That is a 20 ft/s muzzle velocity variation when the recoil is not properly managed.

Skeptical of the provided evidence, I tried to reproduce these results and explore this concept further.

Interior ballistics, the science of how powder burns, gases expand, pressure builds, and bullets travel from brass to bore is incredibly complex and I don't want to trivialize it. There are few people who could claim to be experts on this subject matter and I'm certainly not one of them. This experiment is an effort to observe, explore, and learn.

Generally, I understand the basic premise behind this idea. When a round is detonated, the force is exerted equally in all directions. If you try to prevent the firearm from moving under recoil, then the assumption is that more of that energy is used in the direction of the bullet leaving the barrel. Is this really how it works though?

Here are a few things that came to my mind when throught critically about the evidence for this notion:

I believe the author may have fallen into the common trap of confusing correlation with causation. This seemed like an excellent opportunity to build off of their work. If it's true that recoil management technique has an effect on muzzle velocity, then it should be relatively easy to reproduce the results of this experiment while addressing the questions above.

Does It Even Matter?

If true, this is a big deal. Consistency is king in the world of reloading, long range precision, and competitive marksmanship. If we don't know for certain whether recoil has an effect on muzzle velocity, then we cannot determine the root cause of unexpected variability.

Well, that's my take on it, anyway. To find out what other people believed about this topic, I sent out a brief two-question survey. Here are the results. 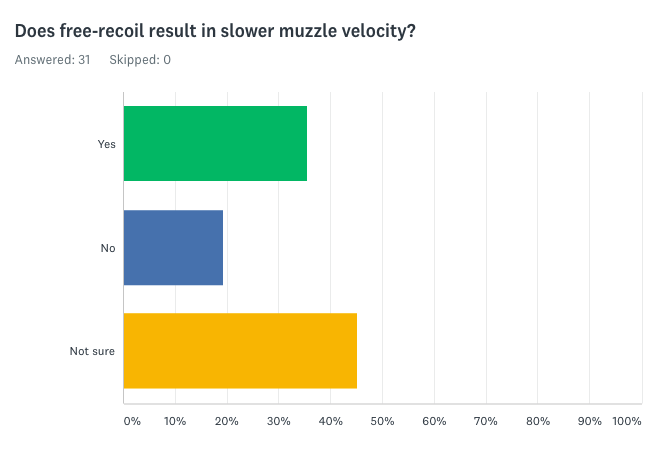 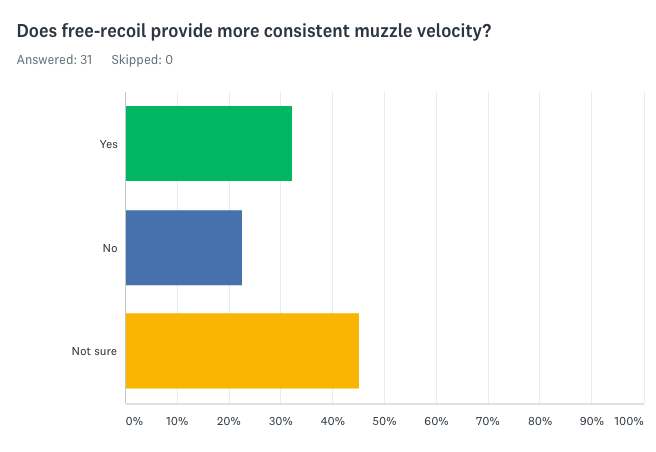 Admittedly, these may not have been the best survey questions to ask.

Suffice it to say, the results were mixed. There was a lack of solid understanding of this topic which motivated me to continue blazing down this rabbit hole in search of the truth.

The first step is to understand what problem we're trying to solve. The question is: Does recoil have any effect on muzzle velocity?

To answer this, we need a better way to determine causality between recoil-management techniques and the velocity of the bullet as it leaves the barrel. More observations would be required in order to measure the other forms of energy that are exhibited by a rifle under recoil. Measuring just speed of the bullet is insufficient -- we need more data.

When a round is ignited, the chamber of the firearm experiences enormous levels of pressure. This chamber pressure begins as the propellant is burned, before the bullet breaks away from the brass and moves down the barrel, so I ran on the assumption that it should not be affected by recoil. Using a Pressure Trace II system to record chamber pressure, I was curious to observe and compare the relative muzzle velocities of rounds that exihibited similar pressure levels.

To take it a step further, I also wanted to measure how the firearm itself moved under recoil. To accomplish this, I built a custom accelerometer unit using off-the-shelf components and wrote some software for it. It's an interesting project by itself and I'll talk more about it in a future article, but I've open-sourced the whole project so anyone can build their own in the meantime. 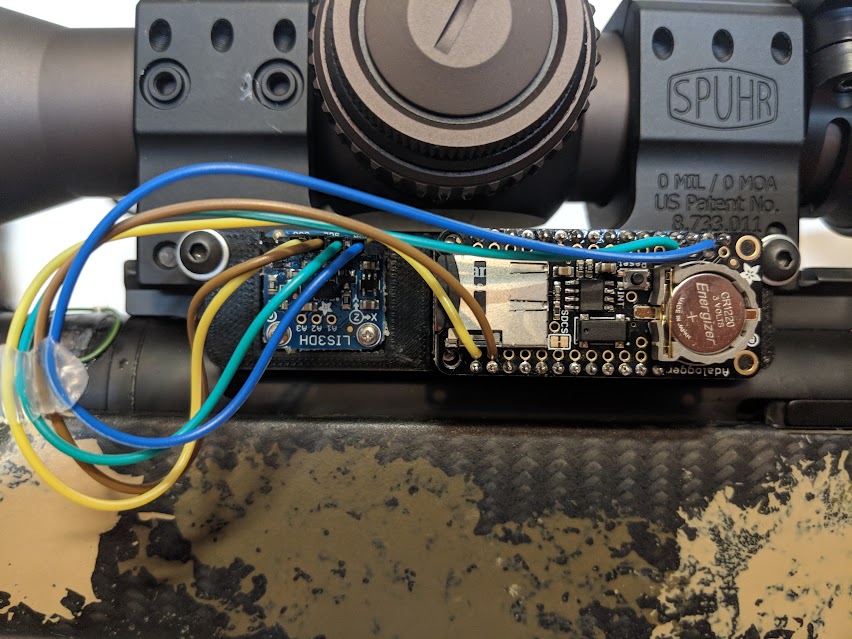 With the combined measurements of muzzle velocity, chamber pressure, and acceleration for every round fired, I expected to be able to produce conclusive results.

To improve the signal-to-noise ratio and increase my chances for success, I wanted to provide extreme differences between my recoil management techniques.

I didn't have access to any kind of machine rest, but that probably would have been better than a preloaded bipod to immobilze the firearm.

In late August, I loaded up 25 rounds and headed to the range with all of my gear. As you can imagine, setting up this much equipment on the firing line generates plenty of weird looks. Everyone was really friendly though and when I explained what I was working on, they were genuinely curious to see the results. As was I.

After setting up the rifle, chronograph, chamber pressure system, turning on the camera, and connecting the battery to the accelerometer, it was finally time to fire some rounds. Since the actual hits on target weren't important for the purposes of the experiment, I fired at steel targets that they keep set up at 300 yards. 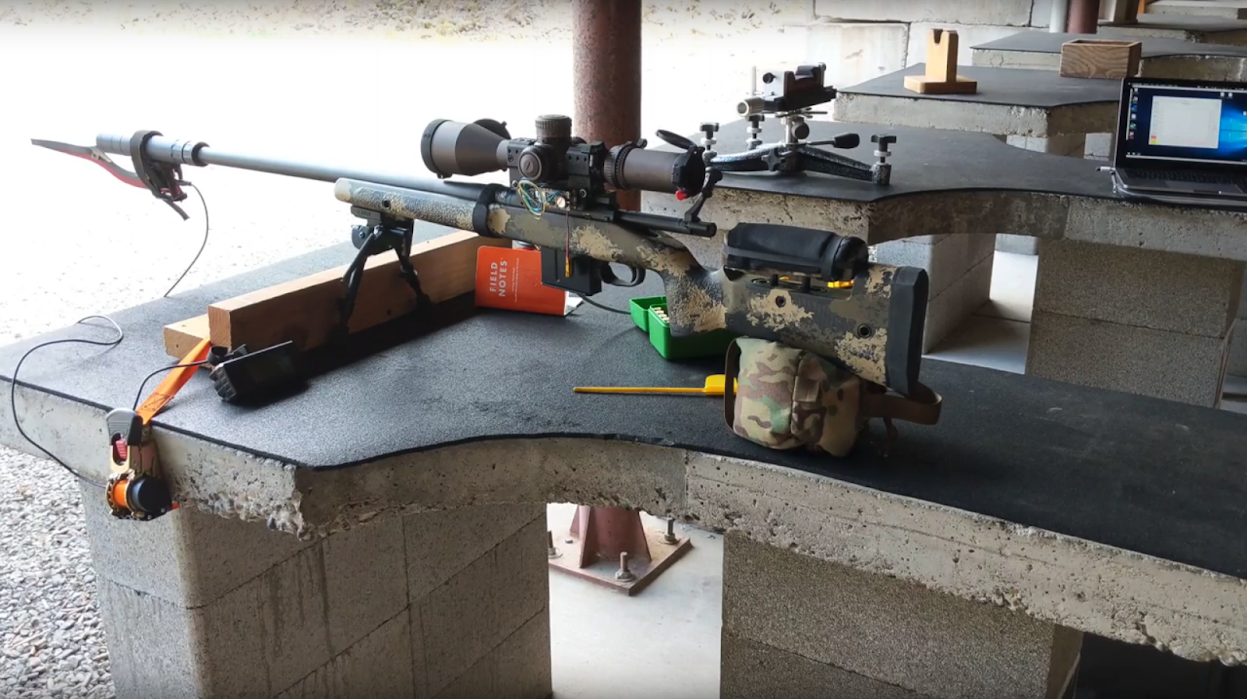 You get a lot of side-eye when you bring this much gear to the range.

Note: While I did sort my bullets by length, I measured from the ogive to the bullet base. As some of the data below will show, I believe this may have caused some inconsistencies.

Note: Due to an issue with the chamber pressure system, it did not record the first sighter/fouler shot. I did get a reading from the chronograph and accelerometer, so I had to separate that one shot when analyzing the data.

Using three devices to record data created a mountain of data to comb through for answers. I wrote some software and used Python and the Pandas library to make this a bit easier. In the interest of transparency, I've also uploaded the raw data files to GitHub for anyone to explore.

The following tables combine some of the basic information from all three devices for each round fired.

As you can see in the charts below, there were some suprises in the two muzzle velocity data sets but not the surprises I was expecting. Notice that there were two rounds within the Preloaded Bipod group which exhibited significantly slower speeds, with Shot 2 reading 2740 ft/s and Shot 10 at 2737 ft/s.

Before jumping to any conclusions about these results, we have plenty more to understand and discuss.

Statistically, the mean (average) of the Free-Recoil group was 4.85 ft/s faster but the median velocity is much closer with only a 1 ft/s difference. I've long advocated for relying on the median velocity instead of the mean, since it's a robust statistic that's affected less by outliers in the dataset like we see here.

So, why were those two rounds slower? Well, I suspect that this issue relates more to my reloading practices (perhaps how I sorted my bullets). We'll come back to that -- let's look at the rest of the data to see what else we can learn.

Generally, the recorded chamber pressures for all rounds fired using both techniques were quite similar. There's a bit of variance in the peak pressure readings, as well as peak time, but nothing out of the ordinary.

When comparing the peak pressures of both datasets, a more interesting picture emerges.

Here's what I noticed:

This agrees with my earlier suspicion, some of which are based on conversations that I had with knowledgable people in the industry about the forces of friction that bullets experience within the rifle. Again, I believe my method for bullet sorting may have caused some problems here because the length of the bearing surface plays a greater role than I understood.

This brings us back to a question I presented earlier. I wanted to compare the pressures exhibited by rounds with a similar or identical muzzle velocity, and vice-versa.

Obviously cherry-picking from datasets is not a best-practice and the following are only intended to satisfy curiosity, not inform conclusions.

What I learned here was that there may not be a direct relationship between peak pressure and muzzle velocity. Maybe. I think there's a good opportunity here for me to continue exploring this topic and if any relationship between various reloading practices can be established.

The following charts show the acceleration of the rifle under recoil as recorded by the attached sensors. Every curve has been aligned by its peak value in the time series in order to aid the visual comparison.

The device I constructed to record recoil acceleration has some limitations:

Two things stood out when I first saw these graphs.

I watched the video of each shot frame-by-frame to see if the rifle was moving forward at all before it moved backward under recoil. Nothing. I thought about it for a couple days, wondering if I had done something wrong or if there was a bug in the sensors. What was moving forward? Then it dawned on me -- the firing pin! I pulled the rifle out of the safe, turned the accelerometer on, and dry fired a few times to confirm. Sure enough, it was sensitive enough to detect the firing pin and recorded an approximate 32 ft/s² spike in forward acceleration. The first mystery was solved!

Why was there a higher peak acceleration on shots where the rifle moved less? I still don't have a definitive answer to this. My best guess is that energy was not used moving the rifle as far as it did with free-recoil. Comparing the area under the curves, I suspect, would result in nearly equal numbers since the kinetic energy must still be the same. If anybody has an answer to this, please let me know and I'll update this article to include it!

Kinematic formulas can be used to calculate the time for the bullet to accelerate in the barrel (length x) up to the muzzle velocity (v). The initial velocity (v0​) is zero and cancels out.

The Pressure Trace II software does visually mark barrel time (with the ＋ symbol along the pressure curve), but it does not provide the numbers either on screen or in the data files. Despite this shortcoming of the software, it appears to estimate roughly 1.4 milliseconds of bullet barrel time in both groups (using the barrel length without the suppressor), not too far off from my calculations.

Regardless, these results strongly suggest that the bullet is long gone before the rifle moves under recoil. How long gone? In my case, the bullet was already 23 ft (7 m) down range. This makes sense because the rifle is nearly 900x heavier than the bullet, so it cannot accelerate as quickly. 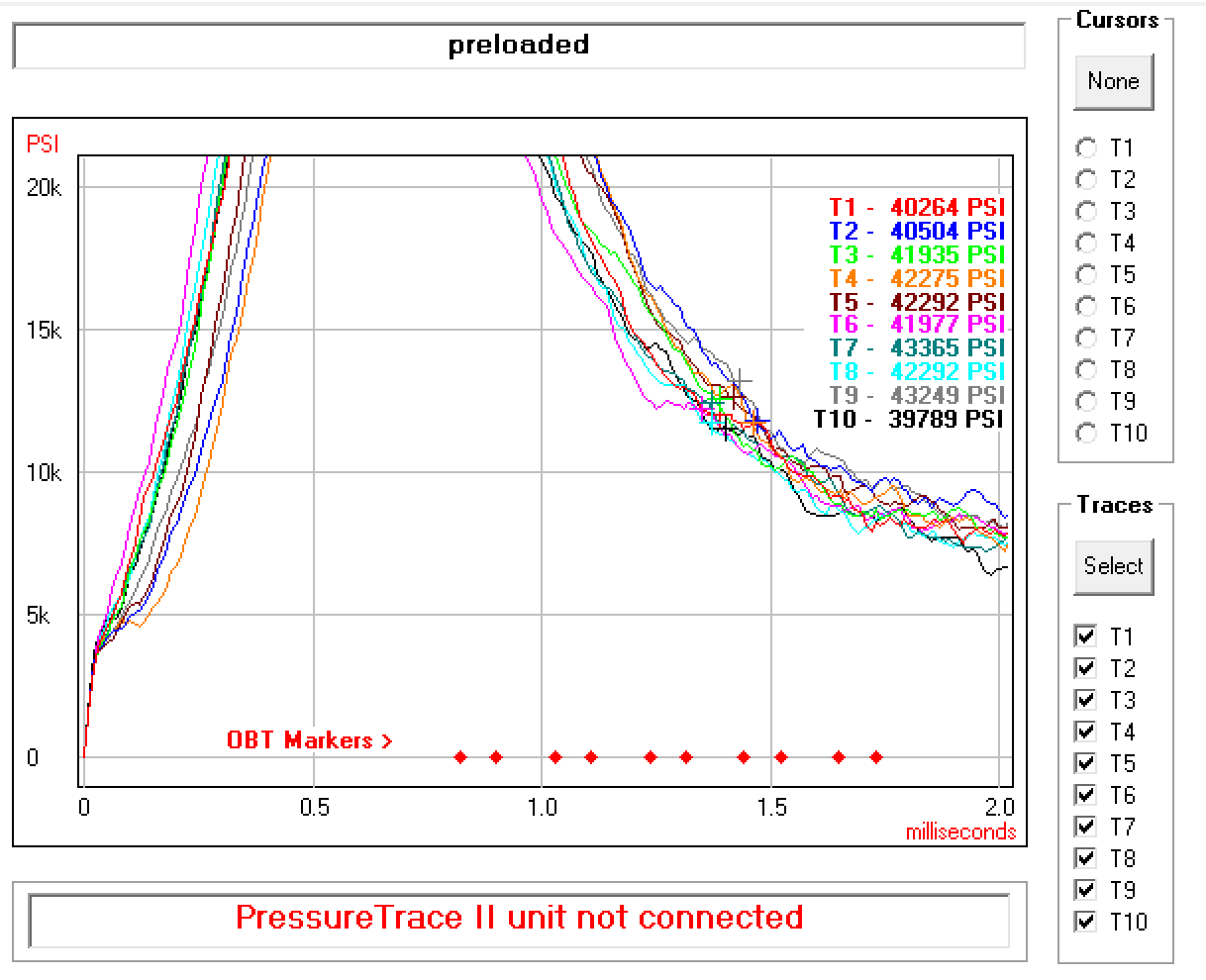 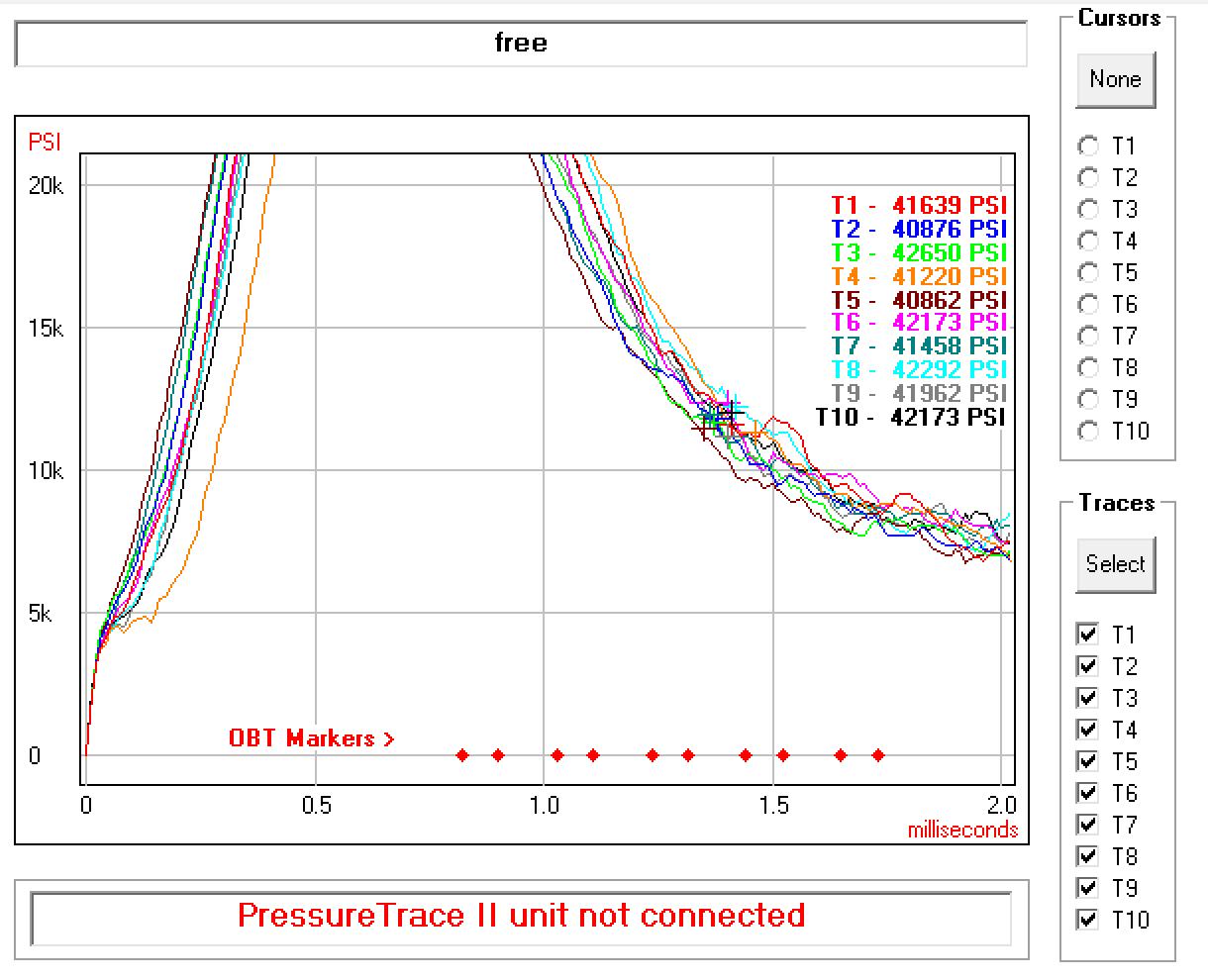 When shooting a precision rifle, preloading your bipod is an incredibly effective technique for managing recoil and getting your sights back on target to watch for impact or prepare for your next shot. However, if you expect it to have an effect on your muzzle velocity, you're going to be disappointed.

Here's what I learned and observed based on the experiment I described above:

Thanks for taking the time to read this article! I enjoyed writing it and learned a lot in this process and I hope that you did too. If you have any feedback, you can email me directly if you don't prefer to use Reddit or other social media.

This article may use affiliate links to help fund Ammolytics while keeping it free of ads, sponsorships, and paid-promotions.