Acer Chromebook Spin 513 review: a chip off a new block

If you buy something from a Verge link, Vox Media may earn a commission. See our ethics statement.

The $399.99 Acer Chromebook Spin 513 (currently listed at $349) is one of the very first Snapdragon-powered Chromebooks to hit the market. Specifically, it’s powered by the Snapdragon 7c Compute SC7180, the type of chip you’d generally expect to see in a tablet or phone. Just from seeing that name, some readers can probably predict exactly what this device is going to be: a lightweight, mediocre performer with excellent battery life.

That’s pretty much what it is — but you get some other nice bonuses, too. The display is much nicer than those I’ve seen on other Chromebooks at this price. It’s portable at 2.65 pounds, its speakers and microphones are serviceable, and it has a really smooth Gorilla Glass touchpad.

If performance is your priority, there are Chromebooks with better processors you can get for this price. But if it’s not, the Chromebook Spin 513 outshines even more-expensive competitors in a few other areas. 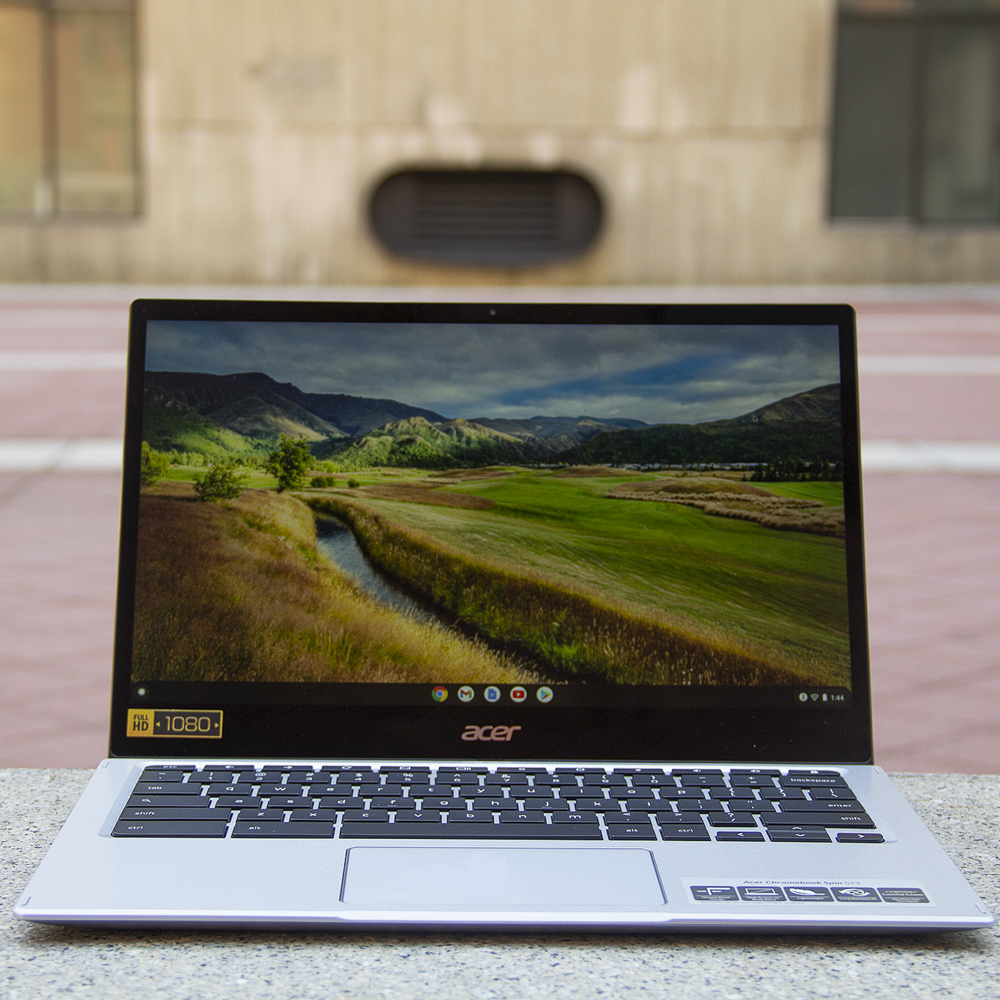 But the Spin 513 looks and feels like it belongs in a higher price category. Acer’s model is thinner than both of these devices at 0.61 inches, and has a much more modern look. The lid is made of aluminum, and the reflective Acer logo adds some flair. The bezels on the sides and top are reasonably small, while still leaving plenty of room to hold as a tablet. It’s also quite portable at 2.65 pounds — easy to carry with one hand, and to slip into a backpack or briefcase.

Speaking of tablet mode, the hinge is sturdy, and you need two hands to open the lid. I’m okay with this, though, because there’s also almost no screen wobble (and screen wobble is the worst).

Every smart device now requires you to agree to a series of terms and conditions before you can use it — contracts that no one actually reads. It’s impossible for us to read and analyze every single one of these agreements. But we started counting exactly how many times you have to hit “agree” to use devices when we review them, since these are agreements most people don’t read and definitely can’t negotiate.

To start using the Acer Chromebook Spin 513, you’ll need to agree to the following:

You can also say yes or no to the following:

In total, that’s four mandatory agreements and seven optional agreements to use the Acer Chromebook Spin 513.

The chassis has some other features you don’t often see at this price point. The keyboard is backlit, which is a huge surprise. It also offers a comfortable typing experience, with satisfying keys that are still quiet. I’m picky about touchpads, but this one is quite roomy, with a smooth Gorilla Glass surface — I’d choose it over plenty of touchpads I’ve used on multi-thousand dollar Windows laptops. And you get a good, modern port selection including two USB Type-C ports (supporting USB 3.2 Gen 1, DisplayPort, and DC-in), one USB 3.2 Gen 1 Type-A, and a 3.5mm combination audio jack. There’s a USB-C on both sides, which I’m very happy about for charging convenience.

But the biggest highlight for me is the display. I generally expect to see bad panels at the $349 price point — the Flex 3 and the C340 are both small (11.6 inches), low-resolution (1366 x 768), and dim. But the Spin 513 has a quite nice 1920 x 1080 screen, which is as good of a resolution as you’ll ever see on any laptop at this price. It delivers a crisp picture, and it gets bright enough for even some outdoor use (if you’re in the shade). If you’re looking for an affordable Netflix machine, the Spin is a great candidate — especially given its movie-friendly 16:9 aspect ratio. Oh, and it even has USI stylus support.

My one disappointment was audio. The Spin comes with two stereo speakers, as well as two microphones. The Chromebook delivered decent volume — certainly enough to fill a room — but percussion was tinny as I listened to music, and you can forget about bass entirely. I also heard some occasional distortion at maximum volume.

Inside, the 7c processor comes paired with 4GB of RAM and 64GB of storage. Some models will support LTE connectivity, though my test unit did not.

The 7c certainly works — but the experience was a bit slow. I’ve been using the Spin as my primary work driver for a week, and I was able to get done most of the things I needed to — Google Docs for work, emailing, tweeting, etc. But I got impatient at times. Resizing a window or sending it to fullscreen, for example, takes just a bit longer than it does on $600 devices. There were occasions where my Google Doc would freeze, and I’d have to wait a couple seconds to resume working.

Unlike with ARM Windows machines, the Spin 513 doesn’t come with restrictions on which Android apps you can download. But some of them were glitchy. Slack, for example, was only usable in a tiny phone-sized window, and completely froze whenever I tried to fullscreen it. Gmail also occasionally froze when I tried to archive messages by swiping, and I sometimes had to repeat the action. I didn’t have either issue when using the same apps on the Intel-based Flex 3 last week.

And some things didn’t work at all. Zoom meetings in the Zoom app weren’t possible on this device — despite using the same internet connection I always use, my audio lagged so far behind on calls that people couldn’t understand me. Editing a batch of photos in Google Photos was also a slow and stuttery experience that I wouldn’t recommend. It’s hard to know whether these can be attributed to Snapdragon compatibility issues that will improve over time, or whether they’re beyond what the processor can do.

Now, none of this means the Spin 513 is a bad laptop. But it does mean I’m not the target audience for this Chromebook, and my standard office workload is a bit above its ideal ceiling. You certainly wouldn’t want to use this if you’re doing anything more than what I was doing. That includes anything elaborate with Linux, and anything that requires an external monitor.

For comparison, the Spin 513 is largely competing with Mediatek and Intel Celeron machines. It’s difficult to compare the Snapdragon 7c to these chipsets (in terms of power) because their architecture is completely different. The best I can say is that anecdotally, I had a slightly faster experience on the Flex 3 with the Celeron N4020. Zoom calls were more feasible on that machine (though they were still bad). With that said, I don’t think the difference is noticeable enough to make the Flex 3 a better buy unless you’re really picky. Both devices are really only meant for basic tasks. Think more elementary school level as opposed to high school or college.

The flipside of this low performance is that the Spin’s battery life is really excellent. I averaged 10 hours and 15 minutes to a charge. That was continuous use, with a more intense workload than anyone should really be putting this Chromebook through, and screen brightness at 50 percent. If your brightness will be lower, you’re doing easier things than I am, and you’re taking some breaks (likely on all three counts), I imagine you’ll be able to go a couple days without needing an outlet. The 45W charger is also quite small, and won’t add much weight to your backpack.

The big question with a Chromebook that costs $399.99 is whether the drawbacks are things you can live with. In this case, the big drawback (and the big area where the Spin 513 is a bit behind competitors) is the processor and the limited RAM. It’s important to understand what this system isn’t made to do.

But if you’re mostly looking for YouTube and light browsing, this Chromebook is definitely the best value I’ve seen at its price point. When it comes to the keyboard, touchpad, and screen, as well as the sturdy build, hinge, and modern port selection, it’s more comparable to something like the $649 Pixelbook Go than to other budget Chromebooks like the Flex 3 and the C340.

The more interesting comparison is to Lenovo’s $279 Chromebook Duet, which also comes with 4GB of RAM, as well as a MediaTek chip. If you’re open to a tablet form factor, that device has better battery life, and its processor flies. But it’s also quite a small device (10.1 inches), so it won’t be a better buy if you’re looking for a full-sized laptop.

The Chromebook Spin 513 won’t be for everyone. But it’s certainly the device it set out to be — a long-lasting, portable machine for light workloads — and if you’re shopping in the $399 range, it’s certainly worth a look.

Photography by Monica Chin / The Verge