How the hell have you done it? 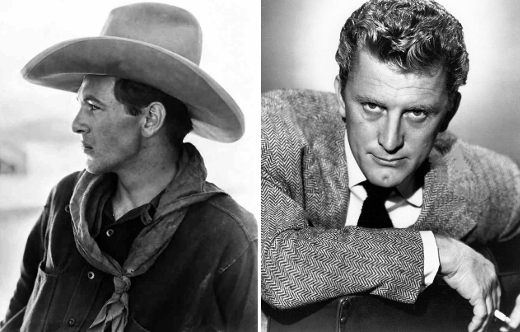 On April 18th of 1961, it was announced that iconic Hollywood star Gary Cooper was dying of cancer after a glittering 36 year career that saw him amass countless fans, plaudits, and awards across the globe. Weeks after that news broke, and just days before he died, Cooper received the following fan letter from Kirk Douglas, who at the time was producing and starring in Lonely are the Brave (titled The Last Hero during production), an adaptation of Edward Abbey's Western novel, The Brave Cowboy.

(Huge thanks to Paul Ryan. Photos: Gary Cooper in The Winning of Barbara Worth, 1926, via Wikimedia; Kirk Douglas in 1955, via Wikimedia.)

Mr. Gary Cooper Beverly Hills Dear Coop: When for years you’ve had affection for a guy and you find it suddenly turning to resentment you begin to think it deserves some kind of comment. When the guy you find yourself disliking is loved by the entire world you know damn well you better explain.

What I'm talking about is me not liking you.

Put yourself in my spot. I'm doing a picture that should have been done by only one guy. I know it--my entire company knows it.

Start with the title--”The Last Hero." Now whom does that fit--me? Hell no!

Next the author. Edward Abbey--a ranger working in the Petrified Forest. They tell me before I meet him that he's written about himself. So now he comes to Albuquerque where we're shooting and I go to meet him at the airport. Fifty guys step off the plane but I spot him immediately. Why? He looks like Gary Cooper. To make matters worse when I meet him he talks like Cooper!

So now we start shooting and I learn first that I have an insensitive director who doesn't give a damn about anything except making the picture real. I give you verbatim my first--and only--direction--"Just try and play this the way Gary Cooper would."

When I say “only" I don't mean I get this "hint" once--I mean it's the only thing I hear before each shot--and by the fourth day I have now decided I must get close to being Coop just so I can stop being hounded.

Ah--but there's the rub. It sounded easy to me--because I say to myself Coop is a simple man--natural. So I'll just be natural. Then I learned the big--big lesson. It ain't easy. My temptation is to ask how the hell have you done it? What is the secret to this peace with yourself and your world? But then I know you couldn't possibly tell me--I'd have to live your entire life--grow--adjust--mature--as you have done.

And I know now that at best I will come remotely close. But more important--I do know also, that just trying to be you--will make a better me.

So, Coop--even though I may be sore as hell at you now--thanks.