By Christopher Snowdon
3 - 4 minutes
My thanks to the indefatigable Phil for pointing me in the direction of yet another study looking at the relationship between smoking and COVID-19. It's the usual story. As the authors say in the introduction...

Influenza infection and severity are worse in smokers compared to non-smokers. In contrast, studies throughout the world have reported a low prevalence of current smokers among people that tested positive for SARS-COV2 and/or were hospitalized due to COVID-19.

The researchers looked at 12,169 people in Texas who have tested positive for SARS-CoV-2 since the pandemic began, of whom 10,216 had previously provided information on their smoking status. Only 3.9 per cent were current smokers. 87 per cent had never smoked.

1,150 (11.2%) of the people who tested positive were hospitalized due to COVID-19 within 14 days. Ex-smokers were more likely to be hospitalised, but current smokers were less likely.

They then made adjustments for body weight and other factors, but this only made the effect bigger...

The smokers were also around half as likely to die from COVID-19 (the researchers do not give a precise relative risk, but 0.8% of the smokers died compared with 1.6% of the never-smokers and 5.1% of the ex-smokers). All the other findings were as you might expect from other studies. For example, obese people were 67% more likely to be hospitalised and women were 43% less likely. 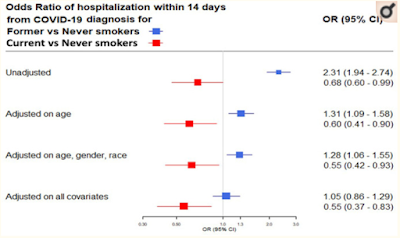 As the authors say...

Our results are in line with the observations of other authors about smoking and severe COVID-19.

Several mechanisms are proposed for this and you can check their references by looking at the study (which is not paywalled).

Several mechanisms have been proposed to describe the association between tobacco use and severe COVID-19. Tobacco smoke impairs mucociliary clearance, weakens innate and adaptive immune responses and increases the risk of both viral and bacterial pulmonary infections. Tobacco use has been shown to increase levels of angiotensin-converting enzyme 2 (ACE2), the unique receptor used by SARS-COV2 to enter host cells.

Alternatively, a potentially protective role of tobacco use in COVID-19 infection has been theorized. Nicotine, a highly addictive, psychoactive alkaloid contained in tobacco products, has shown immunomodulatory and anti-inflammatory effects. Tobacco use has also been linked to increased nitric oxide production in the lungs, resulting in diminished viral replication and impaired viral entry into host cells. Nicotine has also demonstrated a protective effect for ARDS animal models, and is thought to potentially inhibit Interleukin-6, a key player in the cytokine release syndrome induced by SARS-COV2 infection. And while some studies report upregulation of ACE2 receptors for SARS-COV2 cell entry in tobacco users, others challenge this claim and report an interaction between nicotine and the renin-angiotensin system, resulting in reduced ACE2 levels. Moreover, several series throughout the world have reported a low prevalence of current smokers among people that tested positive for SARS-COV2 and/or were hospitalized due to COVID-19.

When I wrote about this for Spiked nearly a year ago, it was the only time an article of mine has been marked with a 'fake news' warning on Facebook. Admittedly the headline was 'Smoke fags, save lives', but with hindsight it stands up better than a lot of what the World Health Organisation was saying at the time.