Amazon Targets Unprofitable Items, With a Sharper Focus on the Bottom Line

Amazon.com Inc. AMZN -4.01% has trained people to buy everything from major appliances to daily staples online. Now it is having second thoughts about some of those sales because they don’t make money—and is pushing big brands to change how they use its site.

Inside Amazon, the items are known as CRaP, short for “Can’t Realize a Profit.” Think bottled beverages or snack foods. The products tend to be priced at $15 or less, are sold directly by Amazon, and are heavy or bulky and therefore costly to ship—characteristics that make for thin or nonexistent margins.

Now, as Amazon focuses more on its bottom line in addition to its rapid growth, it is increasingly taking aim at CRaP products, according to major brand executives and people familiar with the company’s thinking. In recent months, it has been eliminating unprofitable items and pressing manufacturers to change their packaging to better sell online, according to brands that sell on Amazon and consultants who work with them.

One example: bottled water from Coca-Cola Co. Amazon used to have a $6.99 six-pack of Smartwater as the default order on some of its Dash buttons, a small device that allows for automatic reordering with a single press. But in August, after working with Coca-Cola to change how it ships and sells the water, Amazon notified Dash customers it was changing that default item to a 24-pack for $37.20.

That raised the price per bottle to $1.55 from $1.17. And Coca-Cola will start shipping those orders directly to consumers, sparing Amazon the expense of shipping from its warehouses. Manufacturers shipping from their warehouses is something Amazon has asked more brands to do to cut its own costs.

Amazon told Coca-Cola that it was losing money on the smaller, cheaper shipments, according to people familiar with the matter.

Coca-Cola responds that it works with partners to learn together and constantly evolves its offerings.

Moves like that can increase costs for brands. Amazon can get away with it because manufacturers of food and household products are hooked on the online retailer’s size—it accounts for a majority of total e-commerce revenue growth—say consultants who work with brands on their online strategy.

For big consumer brands, not being on Amazon “is not an option anymore,” said Guru Hariharan, chief executive of Boomerang Commerce, which makes e-commerce software. “They have the power; they have the shoppers.”

Amazon also has greater leeway to curb CRaP items because of the rise of independent sellers on its site. They have added hundreds of millions of items, helping ensure that Amazon’s virtual shelves are stocked with the variety shoppers expect. And those sales tend to be more profitable for Amazon, which typically collects a 15% cut plus fees for warehousing.

Chief Financial Officer Brian Olsavsky said earlier this year that eliminating CRaP items is “something that we do and work with our vendors on all the time,” adding that it hasn’t caused a change in profitability for the company in 2018. 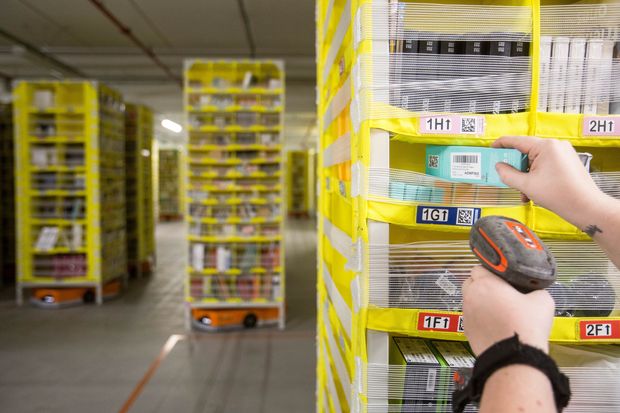 A worker gathers products for a shipment at an Amazon fulfillment center in Italy. Photo: Giulio Napolitano/Bloomberg News

Amazon, like other retailers, has made changes to inventory when an item isn’t selling well and is unprofitable. It also has moved some products-—such as its smaller package of Smartwater—into its Prime Pantry category, in which consumers fill up a box with items to reduce the cost of shipping.

Amazon is trying to boost profitability in its core retail business after years of focusing on growth, according to the people. The company’s profit has risen sharply in the past couple of years, helping its stock price soar, although its market value has fallen again recently. But most of that profitability has stemmed from its growing cloud business and advertising unit.

Brand executives privately say Amazon’s push for profitability can be a double-edged sword. Amazon has pressured them to lower prices and change packaging, both of which can be costly. And eliminating or changing what they sell on Amazon can hurt sales.

Some executives, however, say it can help both companies.

Amazon wants to deliver everything you want to your doorstep, anywhere in the world. But the e-commerce giant faces several challenges in its pursuit of a global empire. WSJ's Karan Deep Singh breaks down the basics with the help of an Amazon delivery box.

Seventh Generation, a Unilever PLC unit that makes plant-based household products, has altered its Amazon selling strategy in recent months after talking with Amazon about improving the profitability of products for sale on the platform, said CEO Joey Bergstein.

Mr. Bergstein said his company has developed new product formats that are more profitable to sell online—on Amazon or elsewhere. Amazon is “really clear that they have a profitability threshold,” he said. “We’ve been clear about saying, ‘Let’s make sure what we’re selling is profitable, and we’re not just lining Amazon’s pockets.’”

That has meant selling smaller, lighter laundry products like detergent pods and skipping cheaper paper towels. Instead of promoting a three-pack of dish soap, Seventh Generation recently started advertising a 6-pack for $17.70, and it created a larger, 504-count package of baby wipes for $19.91 for sale on Amazon and elsewhere.

Mars Wrigley Confectionery and Kellogg Co. executives said they have seen an uptick in products Amazon has dubbed unprofitable over the past year, although they wouldn’t say which items. But they are taking steps to change. Mars, for example, has seen better success on Amazon in selling bigger bags of Life Savers or Dove Promises, a spokeswoman said, and it has better figured out how to offer products online that shoppers want for different occasions.

Campbell Soup Co. , which like Coca-Cola ships some products directly to consumers who buy online, is revamping packaging for Amazon for items such as Campbell’s Chunky Soup and Pepperidge Farm Goldfish crackers, which are typically cheap at the store but relatively heavy to ship.

Campbell now uses predictive technology to monitor pricing dynamics so that it can adjust sizes, change the variety or redesign packaging to ensure the products will be profitable enough to stay on Amazon.

—Heather Haddon contributed to this article.

Write to Laura Stevens at laura.stevens@wsj.com, Sharon Terlep at sharon.terlep@wsj.com and Annie Gasparro at annie.gasparro@wsj.com