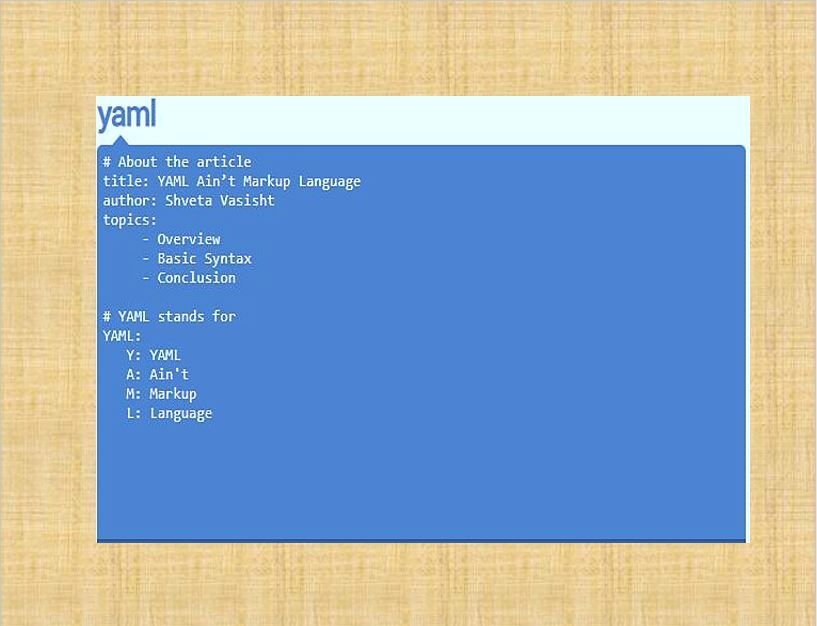 YAML is a data serialization language. It is used to transfer data between applications and services which have different data structures.

Originally YAML meant Yet Another Markup Language. However, it was later repurposed for YAML Ain’t Markup Language to emphasize its data-oriented features.

YAML was designed to be useful and friendly while working with data. It uses Unicode printable characters, some of which provide structural information and the rest contain the data.

It has clear formatting which makes it human-readable, easy to use, and is easily implemented.

YAML minimizes the number of structural characters and allows the data to be represented in a meaningful way. For example, indentation is used for structure, key-value pairs are separated by colons, and dashes are used to create bullet lists. Hence the format appears clearer and can be easily understood.

Let us take an example and compare it with JSON and XML:-

You can see that YAML does not use any special characters and is easier to read. It is the cleanest format of all three.

YAML leverages these to form a complete language for serializing any native data structure.

Most programming languages can use YAML for data serialization, including agile languages such as Perl, Python, PHP, Ruby, and JavaScript. Common use cases include writing configuration files, log files, and data sharing.

Integers, octal, or hexadecimal values can be specified as:

Floating-point values can be fixed and exponential.

String data types are usually not included in quotes but you can use double or single quotes.

The fold character or greater-than sign ( >) folds the text such that it all appears in one line.

The basic building blocks of yaml files are key-value pairs. These are represented in the form key: value. The colon must be followed by a space.

This can also be specified inline by using curly braces {} and separating each entry by a comma.

You can group key-value pairs in objects. Leading spaces have to be same for each attribute in an object

This is a valid format:-

In the example given below, you can see that the attribute employeename is not indented correctly. Below example is an invalid YAML format.

List members are specified with a leading hyphen (-). Each entry is on a new line.

Lists can also be written in square brackets. The entries are comma-separated.

Three hyphens(—) are used to specify the beginning of a new YAML document. You can optionally use three periods (…) to mark the end of a document.

YAML, a superset of JSON, is a powerful yet user-friendly language. It is popular for its minimalism and simplicity, and useful for programming needs such as configuration files, Internet messaging, object persistence, and data sharing.