DNA computing is a branch of computing which uses DNA, biochemistry, and molecular biology hardware, instead of the traditional silicon-based computer technologies. Research and development in this area concerns theory, experiments, and applications of DNA computing. The term "molectronics" has sometimes been used, but this term had already been used for an earlier technology, a then-unsuccessful rival of the first integrated circuits;[1] this term has also been used more generally, for molecular-scale electronic technology.[2] 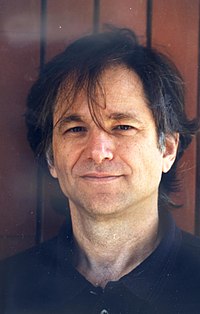 This field was initially developed by Leonard Adleman of the University of Southern California, in 1994.[3] Adleman demonstrated a proof-of-concept use of DNA as a form of computation which solved the seven-point Hamiltonian path problem. Since the initial Adleman experiments, advances have been made and various Turing machines have been proven to be constructible.[4][5]

While the initial interest was in using this novel approach to tackle NP-hard problems, it was soon realized that they may not be best suited for this type of computation, and several proposals have been made to find a "killer application" for this approach. In 1997, computer scientist Mitsunori Ogihara working with biologist Animesh Ray suggested one to be the evaluation of Boolean circuits and described an implementation.[6][7]

In 2002, researchers from the Weizmann Institute of Science in Rehovot, Israel, unveiled a programmable molecular computing machine composed of enzymes and DNA molecules instead of silicon microchips.[8] On April 28, 2004, Ehud Shapiro, Yaakov Benenson, Binyamin Gil, Uri Ben-Dor, and Rivka Adar at the Weizmann Institute announced in the journal Nature that they had constructed a DNA computer coupled with an input and output module which would theoretically be capable of diagnosing cancerous activity within a cell, and releasing an anti-cancer drug upon diagnosis.[9]

In January 2013, researchers were able to store a JPEG photograph, a set of Shakespearean sonnets, and an audio file of Martin Luther King, Jr.'s speech I Have a Dream on DNA digital data storage.[10]

In March 2013, researchers created a transcriptor (a biological transistor).[11]

In August 2016, researchers used the CRISPR gene-editing system to insert a GIF of a galloping horse and rider into the DNA of living bacteria.[12]

The organisation and complexity of all living beings is based on a coding system functioning with four key components of the DNA-molecule. Because of this, the DNA is very suited as a medium for data processing.[13] According to different calculations a DNA-computer with one liter of fluid containing six grams of DNA could potentially have a memory capacity of 3072 exabytes. The theoretical maximum data transfer speed would also be enormous due to the massive parallelism of the calculations. Therefore, about 1000 petaFLOPS could be reached, while today's most powerful computers do not go above a few dozen (99 petaFLOPS being the current record).[14]

The slow processing speed of a DNA-computer (the response time is measured in minutes, hours or days, rather than milliseconds) is compensated by its potential to make a high amount of multiple parallel computations. This allows the system to take a similar amount of time for a complex calculation as for a simple one. This is achieved by the fact that millions or billions of molecules interact with each other simultaneously. However, it is much harder to analyze the answers given by a DNA-Computer than by a digital one.

In 1994 Leonard Adleman presented the first prototype of a DNA-Computer. The TT-100 was a test tube filled with 100 microliters of a DNA-solution. He managed to solve for example an instance of the directed Hamiltonian path problem.[15]

In another experiment a simple version of the “travelling salesman problem” was “solved”. For this purpose, different DNA-fragments were created, each one of them representing a city that had to be visited. Every one of these fragments is capable of a linkage with the other fragments created. These DNA-fragments were produced and mixed in a test tube. Within seconds, the small fragments form bigger ones, representing the different travel routes. Through a chemical reaction (that lasts a few days), the DNA-fragments representing the longer routes were eliminated. The remains are the solution to the problem. However, current technical limitations prevent evaluation of the results. Therefore, the experiment isn’t suitable for application, but it is nevertheless a proof of concept.

In 2002, J. Macdonald, D. Stefanovic and Mr. Stojanovic created a DNA computer able to play tic-tac-toe against a human player.[16] The calculator consists of nine bins corresponding to the nine squares of the game. Each bin contains a substrate and various combinations of DNA enzymes. The substrate itself is composed of a DNA strand onto which was grafted a fluorescent chemical group at one end, and the other end, a repressor group. Fluorescence is only active if the molecules of the substrate are halved. The DNA enzyme simulate logical functions. For example, such a DNA will unfold if two specific types of DNA strand are introduced to reproduce the logic function AND.

By default, the computer is supposed to play first in the central square. The human player has then as a starter eight different types of DNA strands assigned to each of eight boxes that may be played. To indicate that box nr. i is being ticked, the human player pours into all bins the strands corresponding to input #i. These strands bind to certain DNA enzymes present in the bins, resulting in one of these two bins in the deformation of the DNA enzymes which binds to the substrate and cuts it. The corresponding bin becomes fluorescent, indicating which box is being played by the DNA computer. The various DNA enzymes are divided into various bins in such a way to ensure the victory of the DNA computer against the human player.

Kevin Cherry and Lulu Qian at Caltech developed a DNA-based artificial neural network that can recognize 100-bit hand-written digits. They achieve this by programming on computer in advance with appropriate set of weights represented by varying concentrations weight molecules which will later be added to the test tube that holds the input DNA strands.[17][18]

DNA computing is a form of parallel computing in that it takes advantage of the many different molecules of DNA to try many different possibilities at once.[19] For certain specialized problems, DNA computers are faster and smaller than any other computer built so far. Furthermore, particular mathematical computations have been demonstrated to work on a DNA computer. As an example, DNA molecules have been utilized to tackle the assignment problem.[20]

Jian-Jun Shu and colleagues built a DNA GPS[21] system and also conduct an experiment to show that magnetic fields can enhance charge transport through DNA[22] (or protein), which may allow organisms to sense magnetic fields.

Aran Nayebi[23] has provided a general implementation of Strassen's matrix multiplication algorithm on a DNA computer, although there are problems with scaling. In addition, Caltech researchers have created a circuit made from 130 unique DNA strands, which is able to calculate the square root of numbers up to 15.[24] Recently, Salehi et al. showed that with a new coding referred to as "fractional coding", chemical reactions in general and DNA reactions in particular, can compute polynomials. In the fractional coding two DNA molecules are used to represent each variable.[25]

There are multiple methods for building a computing device based on DNA, each with its own advantages and disadvantages. Most of these build the basic logic gates (AND, OR, NOT) associated with digital logic from a DNA basis. Some of the different bases include DNAzymes, deoxyoligonucleotides, enzymes, toehold exchange.

Catalytic DNA (deoxyribozyme or DNAzyme) catalyze a reaction when interacting with the appropriate input, such as a matching oligonucleotide. These DNAzymes are used to build logic gates analogous to digital logic in silicon; however, DNAzymes are limited to 1-, 2-, and 3-input gates with no current implementation for evaluating statements in series.

The DNAzyme logic gate changes its structure when it binds to a matching oligonucleotide and the fluorogenic substrate it is bonded to is cleaved free. While other materials can be used, most models use a fluorescence-based substrate because it is very easy to detect, even at the single molecule limit.[26] The amount of fluorescence can then be measured to tell whether or not a reaction took place. The DNAzyme that changes is then “used,” and cannot initiate any more reactions. Because of this, these reactions take place in a device such as a continuous stirred-tank reactor, where old product is removed and new molecules added.

Two commonly used DNAzymes are named E6 and 8-17. These are popular because they allow cleaving of a substrate in any arbitrary location.[27] Stojanovic and MacDonald have used the E6 DNAzymes to build the MAYA I[28] and MAYA II[29] machines, respectively; Stojanovic has also demonstrated logic gates using the 8-17 DNAzyme.[30] While these DNAzymes have been demonstrated to be useful for constructing logic gates, they are limited by the need for a metal cofactor to function, such as Zn2+ or Mn2+, and thus are not useful in vivo.[26][31]

A design called a stem loop, consisting of a single strand of DNA which has a loop at an end, are a dynamic structure that opens and closes when a piece of DNA bonds to the loop part. This effect has been exploited to create several logic gates. These logic gates have been used to create the computers MAYA I and MAYA II which can play tic-tac-toe to some extent.[32]

Benenson, Shapiro and colleagues have demonstrated a DNA computer using the FokI enzyme[34] and expanded on their work by going on to show automata that diagnose and react to prostate cancer: under expression of the genes PPAP2B and GSTP1 and an over expression of PIM1 and HPN.[9] Their automata evaluated the expression of each gene, one gene at a time, and on positive diagnosis then released a single strand DNA molecule (ssDNA) that is an antisense for MDM2. MDM2 is a repressor of protein 53, which itself is a tumor suppressor.[35] On negative diagnosis it was decided to release a suppressor of the positive diagnosis drug instead of doing nothing. A limitation of this implementation is that two separate automata are required, one to administer each drug. The entire process of evaluation until drug release took around an hour to complete. This method also requires transition molecules as well as the FokI enzyme to be present. The requirement for the FokI enzyme limits application in vivo, at least for use in "cells of higher organisms".[36] It should also be pointed out that the 'software' molecules can be reused in this case.

DNA computers have also been constructed using the concept of toehold exchange. In this system, an input DNA strand binds to a sticky end, or toehold, on another DNA molecule, which allows it to displace another strand segment from the molecule. This allows the creation of modular logic components such as AND, OR, and NOT gates and signal amplifiers, which can be linked into arbitrarily large computers. This class of DNA computers does not require enzymes or any chemical capability of the DNA.[37] 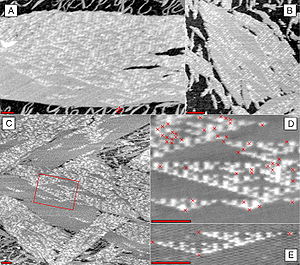 DNA arrays that display a representation of the Sierpinski gasket on their surfaces. Click the image for further details. Image from Rothemund et al., 2004.[38]
Main article: DNA nanotechnology: Algorithmic self-assembly

DNA nanotechnology has been applied to the related field of DNA computing. DNA tiles can be designed to contain multiple sticky ends with sequences chosen so that they act as Wang tiles. A DX array has been demonstrated whose assembly encodes an XOR operation; this allows the DNA array to implement a cellular automaton which generates a fractal called the Sierpinski gasket. This shows that computation can be incorporated into the assembly of DNA arrays, increasing its scope beyond simple periodic arrays.[38]

A partnership between IBM and Caltech was established in 2009 aiming at "DNA chips" production.[39] A Caltech group is working on the manufacturing of these nucleic-acid-based integrated circuits. One of these chips can compute whole square roots.[40] A compiler has been written[41] in Perl.