Successful startups are the key to future innovation and economic growth. But starting them is extraordinarily hard. Looking back, I wish I would have had a simple resource to answer questions that every startup faces, from fundamental concerns like how to fundraise or how to launch, to mundane but critical decisions like how to find office space or what CRM to pick. Startups should focus on making great products and not struggle so much to build their operational infrastructure.

As part of our blog, we are also releasing a lot of helpful aggregated data about startups and how they spend their money. We think this data is missing from the market, as it's difficult for startups to benchmark themselves and know if they are spending too much or too little, as well as what vendors their peers are using.

Brex is releasing the Brex Log as part of our commitment to both startups and transparency. We're excited to help as many people, teams, and companies as possible get the most out of the startup economy so we all can continue to drive progress together.

In 2018, we regularly hear about the importance of fostering a culture of transparency for tech startups. Sharing knowledge, resources, and contacts are key to the startup economy and helping startups grow. Yet there is still one major question before many founders: how are today’s leading startups spending their money?

If you’re a startup trying to understand how you measure up to others, it’s hard to know where to invest your time, money, and resources. When startups have a 50% chance of failure, you can’t afford to be using your startup capital without a roadmap, especially when 82% of startup failure is due to cashflow problems.

At Brex, what we’ve learned is that a culture of transparency empowers startups to learn from each other, grow their businesses, and ultimately make better decisions. With that in mind, we set out to discover how top startups are allocating their venture dollars (often called “burn”). What technology is giving them a competitive advantage? Are startups spending their money differently regionally? What industries have the highest burn-rates?

We leveraged data on Y Combinator companies using Brex to create a benchmark for leading emerging companies and analyzed how they measure up to other startups from all stages. This report aims to provide insightful context on what and how startups should be spending their investment dollars, therefore enabling founders to have honest discussions with each other about how to wisely spend their funding and grow their businesses.

In order to provide more transparency on the state of the startup economy, Brex did a comprehensive analysis of the size of the startup market that remains in stealth (meaning it has not announced a capital raise or released any information to the public). Venture capital investment in stealth startups has been widespread. In our 2018 Stealth Startup Report, we found that $1.43 billion of VC investment are in startups still in stealth.

So what were the top industries in which VCs invested into stealth companies? The startups that made it to the top 30th percentile of VC funding include startups in Financial Services, Healthcare, Consumer and Enterprise Software, Real Estate, Biotechnology and Food & Beverage. 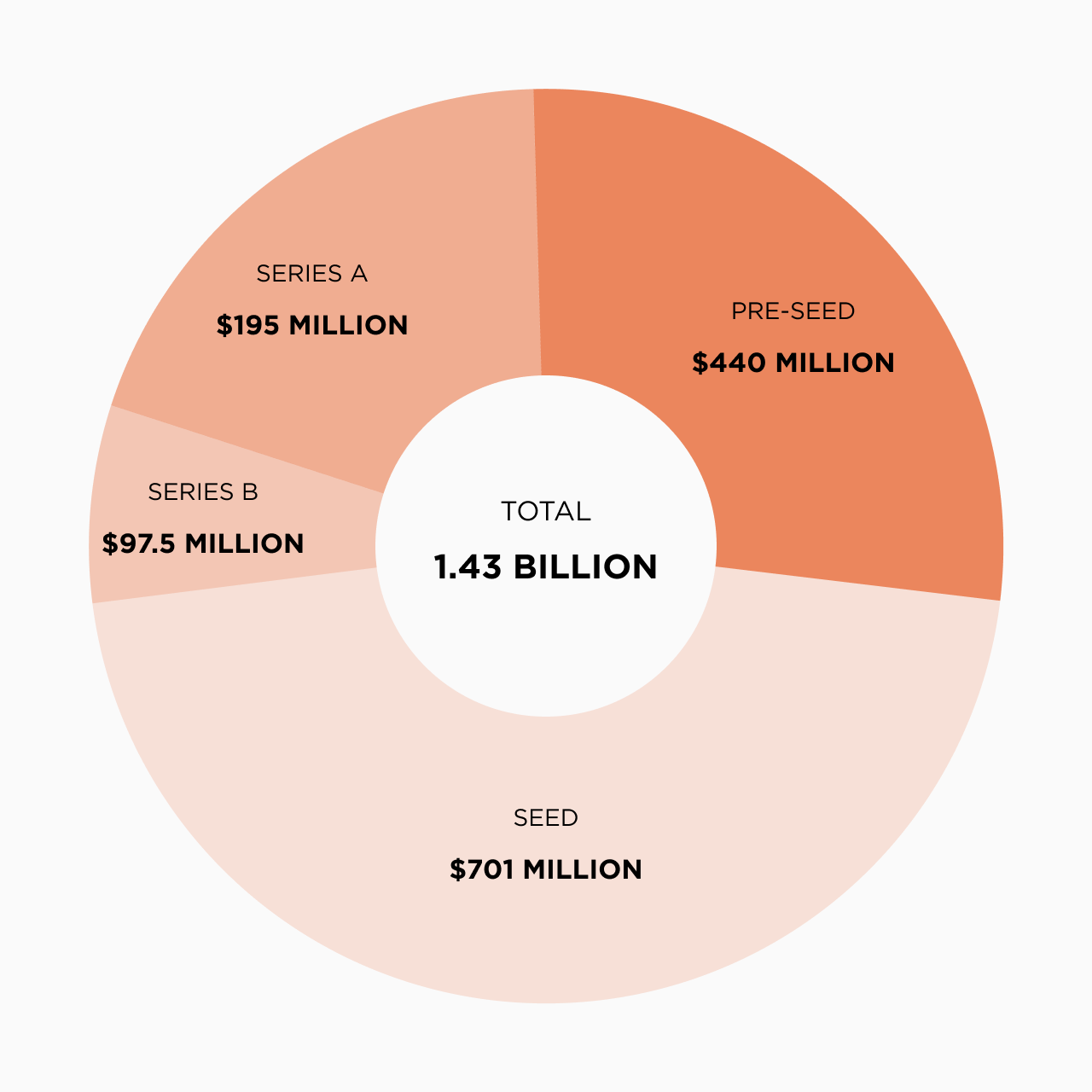 Investment in stealth startups only reflects 3-5% of overall VC investment, so where are the rest of VC dollars going?

According to the Q3 2018 Global VC Report, July 2018 saw one of the biggest investments in startups by VCs in over a year and a half. And to put that in a broader perspective, early stage startups are projected to receive $8 billion dollars in total VC investment, while late stage startups will be receiving $70 billion in funding before the end of the year.

We spoke with a VC at IVP to better understand the general trends in VC investment this year, and gain perspective on what types of startups VCs are looking to invest in the coming years. According to Somesh Dash at IVP (who is also a Brex investor), “machine learning and AI dominate the headlines, but we are seeing a lot of investment across fintech and B2B SaaS as well.”

2018 has been a huge year in terms of both VC spend and startup spend. Now, we’ll look at what early-stage startups are doing with all of those VC dollars.

So what were the major takeaways our data revealed to us about how startups are spending their money? By looking at what industries have the highest burn-rates, and if those burn-rates differ regionally, or by stage of the startup, you may be able to get a better sense of your financial priorities.

When it comes to how startups are spending their hard-won capital, there are quite a few surprises, in regards to burn-rate:

We also wanted to know which tech hubs might be known for burning through cash more aggressively than others. Here’s how spending stacks up by region:

*Silicon Valley includes all companies from Millbrae to just north of San Jose, Bay Area includes all startup companies in the Bay not included  in our Silicon Valley or San Francisco calculations. To create a more comprehensive view of these regions we also include a select group of additional startups for the region analysis. 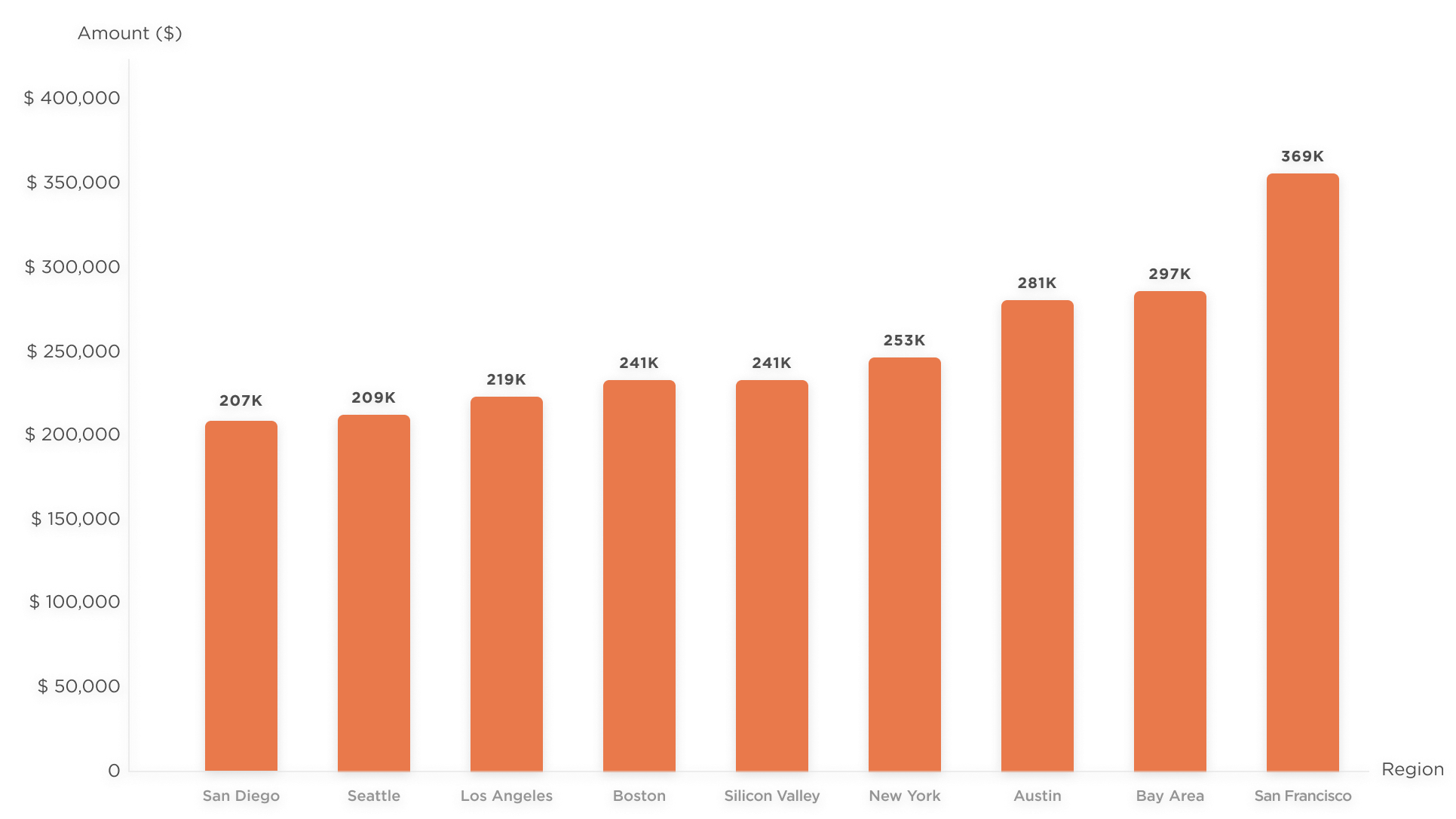 So we know the who and how of startup spend, but what are they spending it on? What does the startup tech stack look like? For the most part, one thing is clear: tech titans and industry veterans like Paychex and Salesforce are not popular with startups — startups are instead relying on other startups.

Here are the brands and services that top startups today rely on:

See below for the full results:

Whether you’re a startup in stealth or raising your series B funding, it can be difficult to understand where you should be investing your money and how you compare against your peers.

What we’ve learned is that startups are creating their own ecosystem. They are investing in other startups that mirror their own goals of creating user-friendly, affordable, and innovative solutions for the market.

We hope that our analysis provides insight into how emerging companies are investing in the startup economy and give founders a way to benchmark themselves against top startups as they seek to optimize their their hard-won capital.

As part of its underwriting process, Brex maintains visibility into the spending of companies that use its products. Brex looked at hundreds of Y-Combinator companies specifically, across a range of pre-seed companies to series B companies from 2017-2018. Y-Combinator is recognized as one of the top investors in highly successful startups.

To compile the data on the YC companies that graduated — that is, those YC companies that successfully raised again and went from one stage to another, we looked at cash increases in overall balances, indicative of fresh funding rounds. We excluded pre-seed companies from the data given the high level of uncertainty of companies at that stage. After removing a few outliers, we then calculated the 25th percentile, the average, and the 75th percentile burn rates for seed, series a, and series b stages. Companies who asked that their data not to be shared were not used, and any company that does not wish to share its data for future aggregated analysis may request to exclude it from being shared in the aggregate.