Mod Edit: To clarify. China has set up an online games ethics committee to review games. The list of games reviewed has not been revealed to the public and therefore the list published on reddit is not confirmed. The rumor tag has been added to the title because of this. According to Reddit post on /r/gaming, the list of games reviewed by the ethics board was revealed by the users on NGA, a Chinese gaming forum. Games requiring corrective action (causes are in parentheses):Games banned/withdrawn:
Some of these games banned like PUBG, Tencent/NetEase will took a hit as their player bases are mostly made out of Chinese players. I'm surprised that Paladins took a banhammer while League of Legends managed to get away even though there is more revealing content in LoL. Chinese player bases right now: 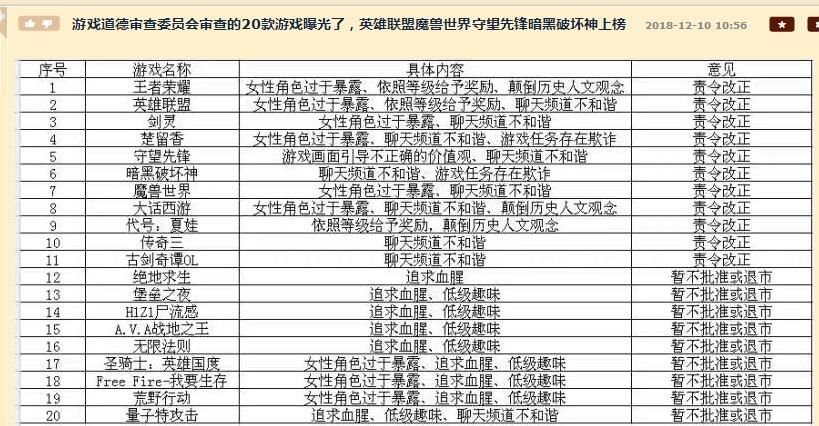 Inharmoniously lock this thread if old. EDIT: Some additional info by original Reddit poster (ZeroWolfe547): It's not entirely clear if the recommended actions have actually been enforced by regulators, last I heard PUBG and Fortnite for example are still playable. All the titles slated for withdrawal are battle royale games, which seems to suggest either regulators really want to crack down on the genre, or their popularity is making them targets. Tencent and NetEase are the two biggest gaming companies in China, with the former the biggest in the world. They partner with and manage the servers of pretty much every foreign online game that enters the Chinese market. NetEase does all of Blizzards titles for example, and Tencent now owns League of Legends entirely. Notes on the reasons: Despite the lack of religious influences, traditional Chinese culture is very puritanical. For example, creation, distribution, and possession of pornography are all illegal (recently the government approved financial awards for whistleblowing on porn), and TV shows in the past have been pulled over female characters showing too much cleavage. Lately Xi Jinping's administration has also been reviving stricter moral control. I'm curious how Overwatch wasn't given this charge too, considering Widowmaker's design. I'm guessing the whole "rewarding by rank" is a problem because it suggests class divisions, rather than purely rewarding based on merit? Communist ideology pops up in places even if the country isn't exactly on that path anymore. Correct conceptions of history have seen renewed attention recently as well. Nominally it's supposed to mean Marxist historical materialism, but in colloquial use, it can refer to misrepresentation of history as well. The official Communist Party version of Chinese history is written into Chinese law as part of the PRC's constitution. Fantastical depictions of historical figures can be problematic, as is time travel, and unflattering depictions of revolutionary leaders is downright illegal. "Inharmonious chat" refers to the perceived lack of effort by publishers to combat toxicity, vulgarity, and politically sensitive speech in chats. In China usually games implement lists of censored phrases that are constantly updated to adhere to this requirement, and they are usually very aggressive and would much rather over do it than let anything slip.

I'm not sure what "game visuals promote incorrect values" would refer to, I can't really think of anything unique to Overwatch that goes in that direction.

Last edited by a moderator: Yesterday at 10:48 PM

Wonder how the developers will respond? Might they re-work the games entirely for Chinese markets?

China really is a dystopian hellscape in the making. Almost there too. Between their social credit system, incentives for ratting people out, and total control of their internet and content along with advanced citizen ID tracking, basically if they arent already brainwashed they better act like it or have their lives ruined.

"Inharmonious chat" refers to the perceived lack of effort by publishers to combat toxicity, vulgarity, and politically sensitive speech in chats. In China usually games implement lists of censored phrases that are constantly updated to adhere to this requirement, and they are usually very aggressive and would much rather over do it than let anything slip.

Are there any sprays featuring Tracer and Emily together? Its the only thing I could think of relating to "game visuals promote incorrect values." Also am I reading this right? You can't give better rewards based on having a higher rank?

So this is the power of communism

What a society to live in. How do you get to the point where you outright ban games for blood, gore and some sexualized characters. Like you can put your own age ratings on the games right?

Why dont they think adults can handle this type of violence (or some T&A)? And the "inharmonious chat" shit is the real kicker and shows how controlling of a society they seek to have.

This is why Google openly working with the Chinese government scares the crap out of me. I wish it was as simple as just ignoring a market where a foreign company is seen as something to exploit technologies from then drive them out of China or just take them over completely.

Chinese native companies have first dibs patents and copyrights even if the technology was created by someone else outside of China.

I’m surprised they are banning/making so many restrictions on games that a Chinese company owns or has partnerships with.

Tencent is going to take a huge hit.

Same here. I thought the whole reason Tencent was so big was because they were essentially gatekeepers for any game that wanted to get into China. So much for that, I guess.
Are there any sprays featuring Tracer and Emily together? Its the only thing I could think of relating to "game visuals promote incorrect values."
It would not surprise me if "game visuals" is referring to the comic.

It's scary how much control the Chinese Government has over people's lives. These ridiculous censorship reasons are basically saying "Listen we want to control everything you do, see, and consume."