Hammer time: fixing the printer on a vintage IBM 1401 mainframe

The Computer History Museum has two operational IBM 1401 computers used for demos but one of the printers stopped working a few weeks ago. This blog post describes how the 1401 restoration team diagnosed and repaired the printer. After a lot of tricky debugging (as well as smoke coming out of the printer) we fixed a broken trace on a circuit board. (This printer repair might sound vaguely familiar because I wrote in September about an entirely different printer failure due to a failed transistor.)

The IBM 1401 business computer was announced in 1959, and went on to become the best-selling computer of the mid-1960s, with more than 10,000 systems in use. A key selling point of the IBM 1401 was its high-speed line printer, the IBM 1403. It printed 10 lines per second with excellent print quality, said to be the best printing until laser printers were introduced in the 1970s. 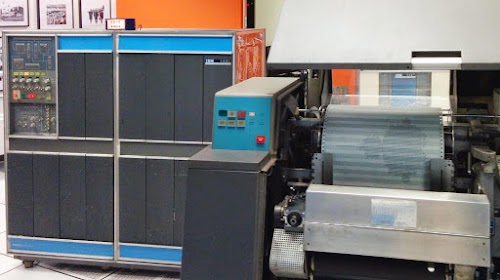 The IBM 1401 mainframe computer (left) at the Computer History Museum printing the Mandelbrot fractal on the 1403 printer (right).

To print characters, the printer used a chain of type slugs (below) that rotated at high speed in front of the paper, with an inked ribbon between the paper and the chain. Each of the 132 print columns had a hammer and an electromagnet. At the right moment, when the desired character passed the hammer, an electromagnet drove the hammer against the back of the paper, causing the paper and ribbon to hit the type slug, printing the character.1

The type chain from the IBM 1401's printer. The chain has 48 different characters, repeated five times.

The printer required careful timing to make this process work. The chain spun around at 7.5 feet per second and each hammer had to fire at exactly the right time to print the right character perfectly aligned without smearing. Every 11.1 µs, a print slug lined up with a hammer, and the control circuitry checked if the slug matches the character to be printed. If so, the electromagnet was energized for 1.5 ms, printing the character. 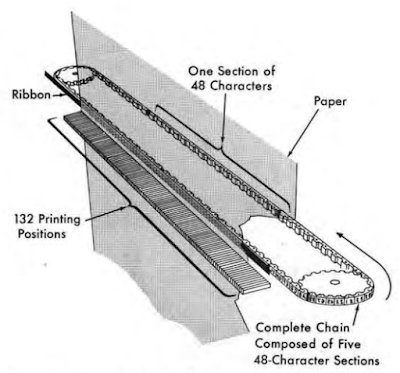 While the printer is usually reliable, a few weeks ago the printer stopped working and displayed a "sync check" error on the console. The computer needs to know the exact position of the chain in order to fire the hammers at the right time. If something goes wrong with this synchronization, the computer stops with "sync check" rather than printing the wrong characters. 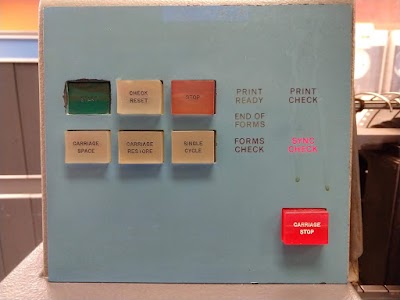 When the sync check light on the printer is illuminated, you have a problem.

To track the chain position, the computer receives a sequence of pulses from the printer: a pulse when the first hammer is lined up with a type slug2 and a double pulse when the chain is in its "home" position with the first character lined up. The pulses are created by a slotted metallic timing disk inside the printer. A magnetic pickup detects these slots and produces a small 100 millivolt signal.7 This signal is amplified inside the printer by two differential amplifier cards to produce a stronger square wave signal. (This is the only electronic part of the printer. Everything else inside the printer is electromechanical or hydraulic; a high-speed hydraulic motor feeds paper through the printer and drips oil on the floor.)

The computer receives these pulses from the printer and generates a logic signal that increments counters to keep track of the chain's position. The schematic below shows part of the circuitry inside the computer, starting with the sense amplifier signal from the printer at the left. Don't try to understand this circuit; I just want to show the strange schematic symbols that IBM used in the 1960s. The box with "I" is an inverter. The triangle is an OR gate. The semicircle that looks like an AND gate is actually an OR gate. The large box with a "T" is a trigger, IBM's name for a flip-flop. The "SS" box is a "single shot" that creates a 400µs pulse; this detects the double pulse that indicates the chain's "home" position.

To track down the problem, we removed the printer's side panel to access the two amplifier circuit boards, which are visible below. We probed the boards with an oscilloscope. The first amplifier stage (on the right) looked okay, but the second stage (on the left) had problems. In the photo below, the computer is at the back, mostly hidden by the printer. 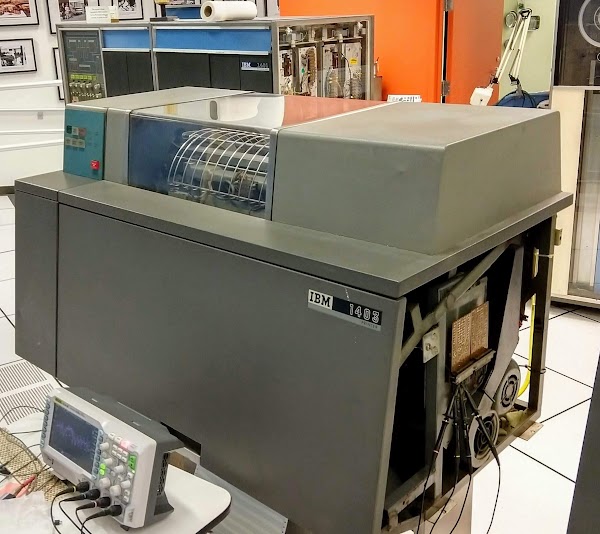 We took the side panel off the 1403 printer to reveal the circuit boards. We hooked an oscilloscope up to the front board to test it.

The trace below shows what should happen. The board receives a differential signal at the bottom, with alternating cyan and pink signals. The difference between these signals (middle) is amplified to produce the clean, uniform pulse train at the top. Note the double pulse in the middle indicating the chain's home position.

Oscilloscope trace from a working printer.

But when we measured the signal, we saw signals that were entirely garbled. The differential signals at the bottom are a mess, and track each other rather than alternating. The output signal (top) is basically random. With this signal from the printer, the computer couldn't keep track of the chain position and the sync check error resulted. 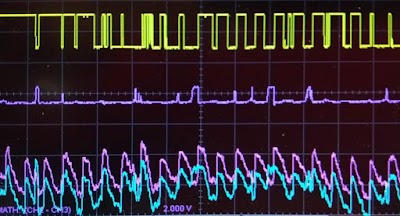 Oscilloscope trace from the faulty printer. 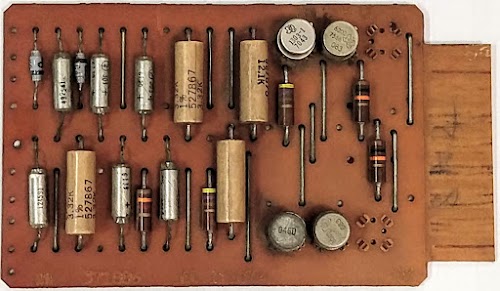 The "WW" differential amplifier card used by the printer.

We suspected a failed transistor, so we used Marc's vintage Hewlett-Packard curve tracer (below) to test the transistors. One transistor was much weaker than the others. Since the performance of a differential amplifier depends on having transistors with closely matched characteristics, we searched through a couple dozen transformers to find a matching pair and replaced the transistors. (We later determined that these transistors were not part of the differential pair—they were "emitter follower" buffers, so our effort was wasted.)3 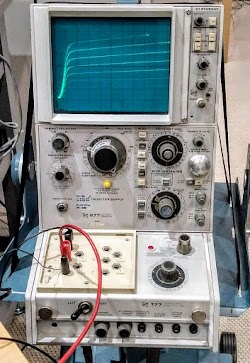 We used a vintage HP transistor curve tracer to test the transistors.

Back at the Computer History Museum, we tested out the repaired board and the printer still didn't work. Even worse, smoke started coming from the back of the printer! I quickly shut off the system as an acrid smell surrounded the printer. I expected to see a blackened transistor on the board, but it was fine. I examined the printer but couldn't find the source of the smoke.

I decided to test the board outside the printer by feeding in a 2kHz test signal, but the measurements didn't make sense. The board seemed to be ignoring one of the inputs, so I tested that input transistor but it was fine. Next I checked the diodes, capacitors and resistors again; all the components tested okay, but the board still mysteriously failed. I started carefully measuring voltages at various points in the circuit but the signals didn't make sense and weren't consistent. Since all the components were fine but the board didn't work, I was starting to losing confidence in electronics. Eventually, I nailed down a signal that randomly jumped between 10 volts and 1 volt. After wiggling all the components, I finally noticed that the voltage jumped if I flexed the board. Finally, I had an answer: a cracked trace on the circuit board between the input and the transistor was making intermittent contact. 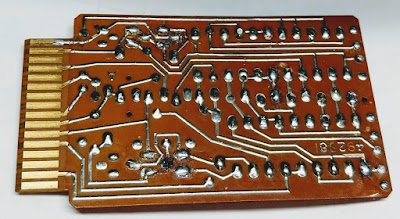 The board had a cracked trace in the upper left, connecting the upper gold contact. Carl put a wire jumper across the bad section.

To fix the board, Carl put a wire bridge across the bad trace6. We put the board in the printer, and the printer mostly worked. However, when the printer tried to print in column 85, the column failed to print and the printer stopped with an error.5 More testing revealed four columns of the printer were failing to print due to hammer problems. Each electromagnetic hammer coil is driven by a 60 volt, 5 amp pulse for 1.5 milliseconds. This is a lot of power (300 watts), so if anything goes wrong, hammer coils can easily burn up. 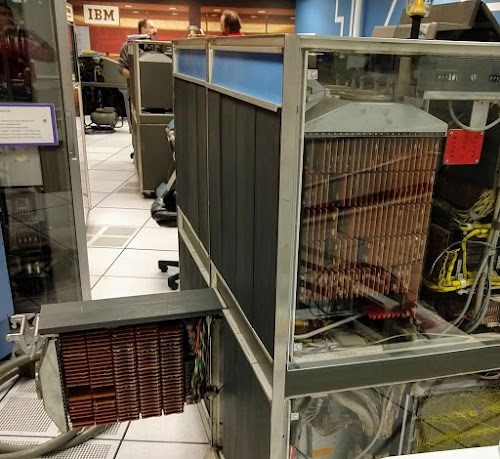 We swung open one of the computer's "gates" (lower left), revealing the cards that drive the printer.

We looked at the printer driver cards inside the computer. Each card generates pulses for two hammers, so there are 66 of these cards. In the photo below, you can see the two large high-current transistors at the left that generate the pulses. (Note the felt insulators on top of these transistors. Due to their height, the transistors pose a risk of shorting against the bottom of the neighboring card.) Just to the right of these transistors are two colorful purple and yellow fuses. In the event of a fault, these fuses are supposed to burn out and protect the hammer coils. We checked the cards associated with the four bad columns on the printer and found four burnt-out fuses. 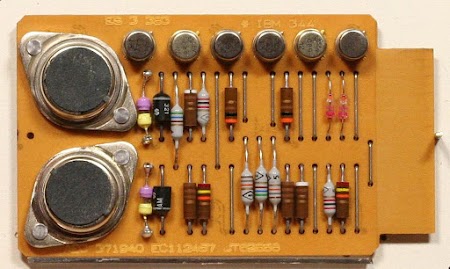 Why did the fuses blow? The circuit to drive the hammer coils is a bit tricky. Every 11 microseconds, a hammer lines up with a character slug and can be fired. But when a hammer is fired, the coil needs to be activated for about 1.5 ms, a much longer time interval. To accomplish this, the hammer driver latches on when a hammer is fired. Later in the print cycle, the hammer driver is turned off. This process is controlled by the chain position counters, which are driven by the pulses from the chain sensor, the same pulses that were intermittent. Thus, if the computer received enough pulses to start printing a line, but then the pulses dropped out in the middle of the line, hammer drivers could be left in the on state until the fuse blows. This explained the problem that we saw.

After Carl replaced the fuses, the printer worked fine except for two problems. First, characters in column 85 were shifted slightly so the text was slightly crooked. Frank explained that the hammer in this column must be moving a bit too slow, hitting the chain after it had moved past its position. This explained the smoke: in the time it took the fuse to blow, the coil must have overheated and been slightly damaged. We'll look into replacing this coil next week. The second problem was that the printer's Ready light didn't go on. This turned out to be simply a bad light bulb, unrelated to the rest of the problems. In any case, the printer was working well enough for demos so the repair was a success.

Closeup of the type chain (upside down) for an IBM 1403 line printer.

I announce my latest blog posts on Twitter, so follow me at @kenshirriff for future articles. I also have an RSS feed. The Computer History Museum in Mountain View runs demonstrations of the IBM 1401 on Wednesdays and Saturdays so if you're in the area you should definitely check it out (schedule).