Lake Peigneur (locally pronounced [pæ̃j̃æ̹ɾ]) is a saline[A] lake in the US state of Louisiana, 1.2 miles (1.9 km) north of Delcambre and 9.1 miles (14.6 km) west of New Iberia, near the northernmost tip of Vermilion Bay. With a maximum depth of 200 feet (61 m), it is the deepest lake in Louisiana.

It was a 10-foot (3 m) deep freshwater body, popular with sportsmen, until an unusual man-made disaster on November 20, 1980 changed its structure and the surrounding land.[1][2] 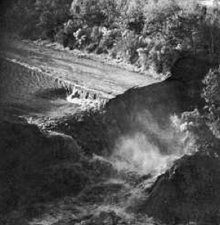 On Thursday, November 20, 1980, an oil rig contracted by Texaco accidentally drilled into the Diamond Crystal Salt Company salt mine under the lake. Because of an incorrect or misinterpreted coordinate reference system (the rig was positioned as if the coordinates were in the Universal Transverse Mercator coordinate system when, in actuality, they were in transverse Mercator projection[citation needed]) the 14-inch (36 cm) drill bit entered the mine, starting a chain of events that turned the lake from freshwater to salt-water, with a deep hole.[3]

It is difficult to determine what occurred, as much evidence was destroyed or washed away in the ensuing maelstrom. Eventually, it was determined that a miscalculation by Texaco about their location resulted in the drill puncturing the roof of the third level of the mine. This created an opening in the bottom of the lake. The lake then drained into the hole, expanding the size of that hole as the soil and salt were washed into the mine by the rushing water, filling the enormous caverns that had been left by the removal of salt since 1919.

The resultant whirlpool sucked in the drilling platform, eleven barges, many trees and 65 acres (26 ha) of the surrounding terrain. So much water drained into those caverns that the flow of the Delcambre Canal that usually empties the lake into Vermilion Bay was reversed, making the canal a temporary inlet. This backflow created for a few days the tallest waterfall ever in the state of Louisiana, at 164 feet (50 m), as the lake refilled with salty water from the Delcambre Canal and Vermilion Bay. Air displaced by the water flowing into the mine caverns erupted through the mineshafts as compressed air and then later as 400-foot (120 m) geysers.

Although there were no injuries and no human lives lost, three dogs were reported killed. All 55 employees in the mine at the time of the accident were able to escape thanks to well-planned and rehearsed evacuation drills, while the crew of the drilling rig fled the platform before it was sucked down into the new depths of the lake; a fisherman who was on the lake at the time was able to pilot his small boat to shore and escape. Days after the disaster, once the water pressure equalized, nine of the eleven sunken barges popped out of the whirlpool and refloated on the lake's surface.

Texaco and the drilling contractor Wilson Brothers paid $32 million to Diamond Crystal and $12.8 million to a nearby plant nursery, Live Oak Gardens, in out-of-court settlements to compensate for the damage caused. The mine was finally closed in December 1986.

Since 1994, AGL Resources has used Lake Peigneur's underlying salt dome as a storage and hub facility for pressurized natural gas.[4][5] There was concern from local residents in 2009 over the safety of storing the gas under the lake and nearby drilling operations.[6]

The lake had salty water after the event, not as a result of salt from the mine dissolving into the water, but from the inflow of salty water from the Delcambre Canal and Vermilion Bay, which are naturally salty or brackish. The event permanently affected the ecosystem of the lake by changing the lake from freshwater to saltwater and increasing the depth of part of the lake.