With coronavirus vaccine distribution well underway around the world, all eyes are on those who have already received the jabs.

In each case, there's more to the story than meets the eye. DW reviewed several cases in Germany, Spain, the United States, Norway, Belgium, and Peru, finding that in all cases experts from multiple health authorities could not find causal links between the vaccination and deaths.

As of publication, at least 37 million coronavirus vaccinations have been administered in these countries, according to Bloomberg's global vaccine tracker. In those countries, the total number of reported deaths that have occurred post-vaccination is around 350. As US data includes user-submitted information, at least 181 of these cases have not been independently verified.

The Paul Ehrlich Institute (PEI), which is in charge of vaccination in Germany, has been looking into 113 reported deaths in the country. In all these cases, those who died were aged from 79 to 93 years old and died between one hour and 19 days after receiving the vaccine. Of those 113, 20 died as a result of the COVID-19 infection (19 of them did not have full vaccination protection; the other case is still unclear). 43 people died as a result of pre-existing conditions, according to Brigitte Keller-Stanislawski, the head of the PEI's department of safety for medical products.

"Based on the data that we have, we assume that the patients died of their underlying disease — in a coincidental time with the vaccination," she told German broadcaster n-tv. While she did not comment on individual cases, she said, "They were very seriously ill patients with many underlying diseases."

"If the elderly or people with severe pre-existing conditions are vaccinated, there will be a certain number of accidental deaths that occur shortly after vaccination, which cannot be causally associated with the vaccination. In its latest safety report, the Paul Ehrlich Institute highlights the cases of 20 vaccinated individuals who died in the setting of the COVID-19 disease.

A press spokeswoman told DW via email that "all of them except one man had incomplete vaccination protection, since the COVID-19 disease occurred after the first vaccination. Protection begins seven to 14 days after the second vaccination (depending on the vaccine) so it is possible to become ill and die from COVID-19 after receiving only the first dose. 33 Individuals with multiple pre-existing conditions are either suffering from the worsening of their underlying disease or from another disease independent of vaccination. Ten individuals died from another infectious disease, not COVID-19."

"In all other persons, there were in some cases multiple previous diseases such as carcinomas, renal insufficiency, heart diseases and arteriosclerotic changes, which were presumably the cause of death," she added. In 50 cases, the cause of death remains unknown.

According to calculations of the Paul-Ehrlich-Institut in this report, the deaths with an unclear cause reported by 31.01.2021 are not more frequent than the expected number of deaths.

In Germany, the BioNTech-Pfizer and Moderna coronavirus vaccines are being used.

Spain: 'At least seven die at care home after getting Pfizer COVID-19 jab'

Spanish media report that nine people died in a Spanish care home after receiving the first dose of the BioNTech-Pfizer vaccination, all of whom had previous illnesses. 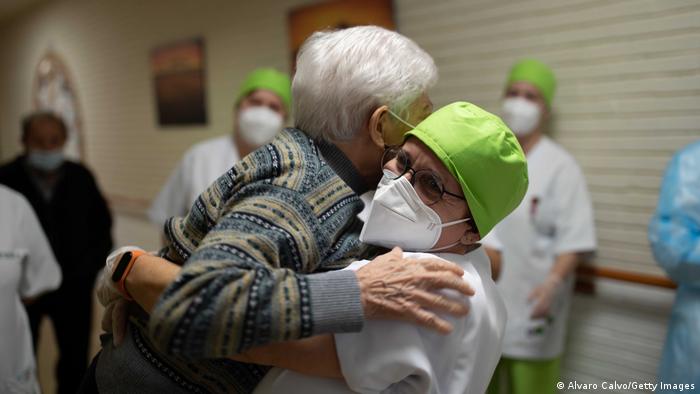 The director of the El Salvador residence for the elderly in Lagartera said symptoms "such as headaches or occasional diarrhea" started showing in residents after five days and a doctor told him these could be due to side effects of the vaccinations.

All nine deaths have been attributed to complications with COVID-19 infection, as the consequence of an outbreak that took place while the vaccination schedule was underway.

The manager of the care home said: "The vaccine will protect you, infections are not derived from the first vaccination."

Even after a vaccination, it's possible to develop the illness if the vaccination took place during the coronavirus incubation period (5-6 days). It is also possible to become infected after the vaccination has been administered, as it usually takes effect 10-14 days after the first dose, according to the Robert Koch Institute for Infectious Diseases (RKI).

BothRussian andChinese state media have heavily reported on this case, with the latter citing the former.

Despite the attention-grabbing headline, the original article from Russian state media clearly states, "There is currently no indication that the vaccine played any role in the deaths."

It then refers readers to a fact-check stating that "It is statistically inevitable that some people will get sick and die after getting the shot, for reasons that are unrelated to their body's response to the vaccine." This disclaimer is missing from those who have replicated the article.

Widely reported in India, this claim is based on a press release by Children's Health Defense, an anti-vaccination advocacy group headed by prominent anti-vaxxer Robert F. Kennedy, Jr., and known for producing misinformation on vaccines and anti-vaccine propaganda.

Although the headline claims that data comes from a "government database," the figures linked to are on the website of the National Vaccine Information Center, an organization described as "the most powerful anti-vaccine organization in America," by science, technology and public health journalist Michael Specter.

Digging deeper, the National Vaccine Information Center (NVIC) claims their data is drawn from the US Government's Vaccine Adverse Event Reporting System (VAERS), which explicitly states "anyone can submit a report to VAERS, including parents and patients," and that "VAERS reports alone cannot be used to determine if a vaccine caused or contributed to an adverse event or illness."

Furthermore, VAERS encourages vaccines providers to report significant health problems "whether or not they believe the vaccine was the cause," and disclaims that its data "cannot be interpreted or used to reach conclusions about the existence, severity, frequency, or rates of problems associated with vaccines" and "should be interpreted in the context of other scientific information."

As far back as 2015, a study assessing claims of deaths from vaccinations highlights that data from the VAERS system is skewed, as it is a system which "accepts any submitted report of an adverse event without judging its clinical significance or whether it was caused by a vaccination." The Centers for Disease Control and Prevention also warns against reporting bias and inconsistent data quality in the VAERS system.

However, the NVIC also solicits reports through its own website in the same basic format as the VAERS report. It does not specify whether the two datasets are combined in their database or kept separate. 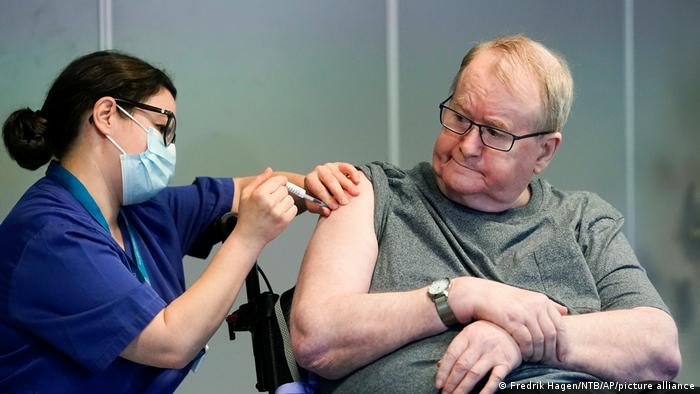 The Norwegian Medicines Agency says there's no connection between deaths in a nursing home and the vaccine.

The Norwegian Medicines Agency, Statens Legemiddelverk, has investigated a total of 33 reports of deaths in nursing homes following vaccination of residents, as of January 26, 2021.

In a subsequent analysis, the agency writes "many of the nursing home residents who have been vaccinated so far are very frail or terminally ill patients. Every day, an average of 45 people die in Norwegian nursing homes or other similar institutions. Therefore, deaths that occur close to time of vaccination is expected, but it does not imply a causal relationship to the vaccine."

The European Medicines Agency'sPharmacovigilance Risk Assessment Committee (PRAC) also investigated the cases, stating in a report that "the review did not reveal any safety concerns," adding, "(multiple) pre-existing diseases seemed to be a plausible explanation for death. In some individuals, palliative care had already been initiated before vaccination."

When assessing the cases, an article in the British Medical Association's peer-reviewed medical trade journal quotes Steinar Madsen, medical director of the Norwegian Medicines Agency saying, "There is no certain connection between these deaths and the vaccine." Instead, Madsen said that "common adverse reactions, that are not dangerous in fitter, younger patients and are not unusual with vaccines, may aggravate underlying disease in the elderly."

"We are not alarmed or worried about this, because these are very rare occurrences and they occurred in very frail patients with very serious disease," he said.

In Belgium, the Federal Agency for Medicines and Health Products (FAMHP) reported that 14 people died after being vaccinated against the coronavirus. However, causality has not been found.

All of the patients were over 70 and five over 90, the Brussels Times reported. Further details of the individuals who died have not been released.

"The fact that the reported deaths did not present a common clinical picture is a rather reassuring element, as is the fact that the deaths occurred after a variable period of time," the FAMHP told the Brussels Times, adding "to date, no causal relationship has been formally found" with the COVID-19 vaccine.

As a result, the FAMHP has published weekly reports examining vaccine side effects. The February 4 report outlined "To date, no formal causal relationship with the COVID-19 vaccine has been established."

Although the exact vaccinations were not specified in these cases, Belgium issues the Pfizer/BioNTech and Moderna coronavirus vaccines. 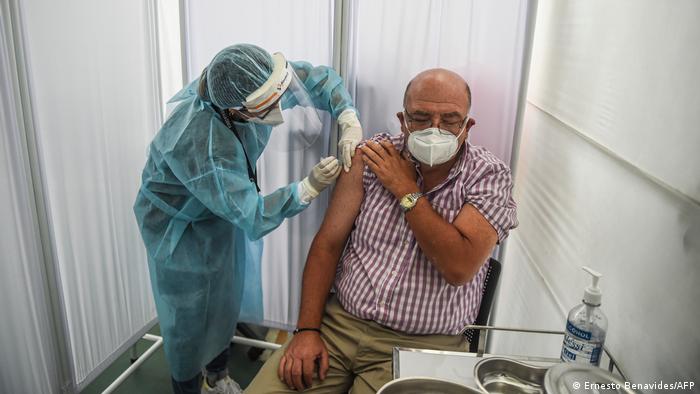 A volunteer (not pictured above) in a Peruvian trial of a Chinese vaccine died of pneumonia related to COVID-19, however she had been given a placebo, not the vaccine.

Cayetano Heredia University, which was conducting a study on China's Sinopharm vaccination had to unblind a local Peruvian trial after a participant died of COVID-19-related pneumonia, according to Reuters.

After unblinding the trial, it was revealed that the volunteer who died has not been administered the vaccine but was instead in the placebo group. In a statement, the university said, "It is important to stipulate that the death of the participant is not related to the vaccine since she received the placebo."

This article was updated February 11 to reflect new figures for Germany.