Many applications benefit from a mix of a graphical and textual interface. This has ranged from entire environments, like the Lisp Machine and the follow-on Common Lisp Interface Manager (CLIM), to specific applications like Mathematica and others which employ a "notebook interface". There have also been various attempts at producing richer terminal applications which can work with either standard or specialized applications to produce richer, more interactive output. Graphically enhanced textual interfaces have also found their place in various genres of games over the years.

In our case, we're interested in enhancing the interaction between a user and a specific tool. We'll take a look here at some of the ideas that have come before to get an idea of what people have already done to inform what we do for ourselves.

Some of the things discussed here are old, some are new. Some are long lost and forgotten (one link below is to archive.org) while others are actively being worked on today.

Like many things, early research into graphically enhanced and interactive textual interfaces was carried out within the Lisp world. An early paper Presentation Based User Interfaces by Eugene C. Ciccarelli IV at MIT from 1984 laid the groundwork for something called "presentations". This was further evolved as part of Dynamic Windows on the Symbolics Lisp Machine, and then carried over into the Common Lisp Interface Manager.

From the CLIM specification:

The core around which the CLIM application user interface model is built is the concept of the application-defined user interface data type. Each application has its own set of semantically significant user interface entities; a CAD program for designing circuits has kits various kinds of components (gates, resistors, and so on), while a database manager has its relations and field types. These entities have to be displayed to the user (possibly in more than one displayed representation) and the user has to be able to interact with and specify the entities via pointer gestures and keyboard input. Frequently each user interface entity has a corresponding Lisp data type (such as an application-specific structure or CLOS class definition), but this is not always the case. The data representation for an interaction entity may be a primitive Lisp data type. In fact, it is possible for several different user interface entities to use the same Lisp data type for their internal representation, for example, building floor numbers and employee vacation day totals could both be represented internally as integers.

In other words, by defining a presentation type, the application programmer describes in one place all the information about an object necessary to display it to the user and interact with the user for object input.

A presentation is an association between

Or more specifically, when output is done as a presentation, CLIM creates an output record associated with an object and a presentation type, and saves that record in the window's output history.

The capabilities of CLIM can be, perhaps, be illustrated more clearly: 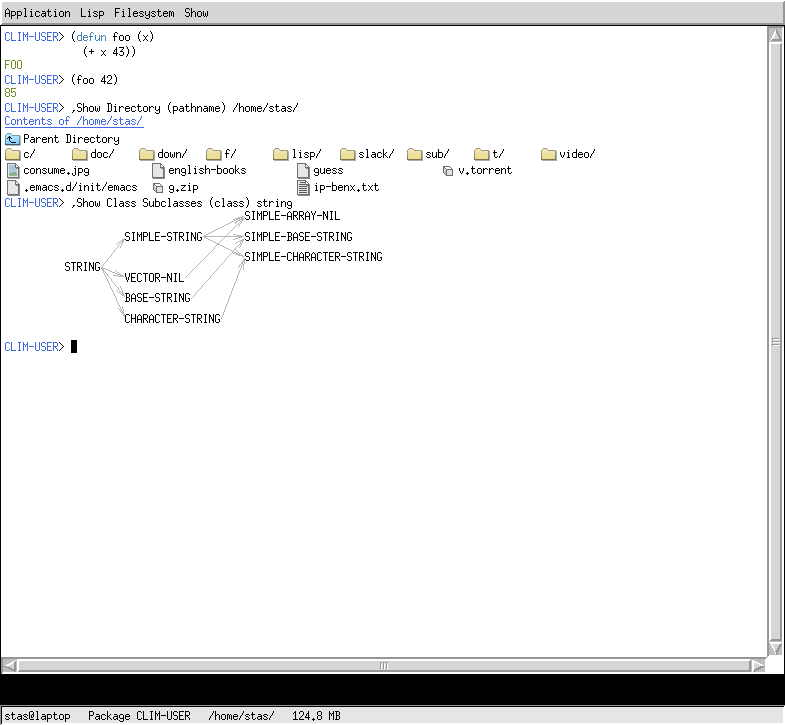 A screenshot of the CLIM Listener from Wikipedia.

You can see in this screenshot that commands such as Show Directory and Show Class Subclasses can have rich output. The extent of the interaction possible isn't on display in the screenshot. (It also shows the presence of inline completion helpers like (pathname) and (class), but that's just part of the nice command parser system present in CLIM.

What did CLIM get right? CLIM provided:

CLIM did a lot of things very well and provided a pretty enjoyable environment within which to work.

Notebook interfaces are interactive documents that represent the history of commands that have been run within a session. They can usually be saved, replayed, and shared with other people. Notebook interfaces typically support rich multimedia, including code with syntax highlighting, mathematical formulas, graphs, charts, and formatted text.

Mathematica was one of the early pioneers in this area. A simple screenshot doesn't do Mathematica justice. Try to find the time to watch Mathematica in action during the Strange Loop 2014 keynote by Stephen Wolfram. It really is something to be seen.

The iPython notebook interface can be used with multiple front-ends: 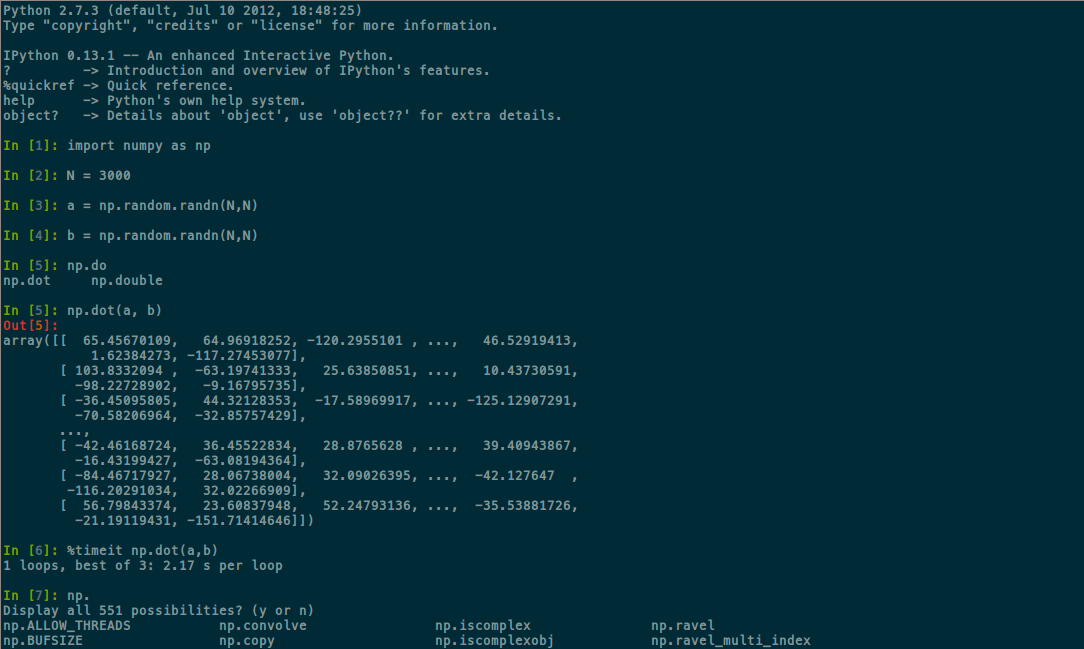 iPython running in a terminal 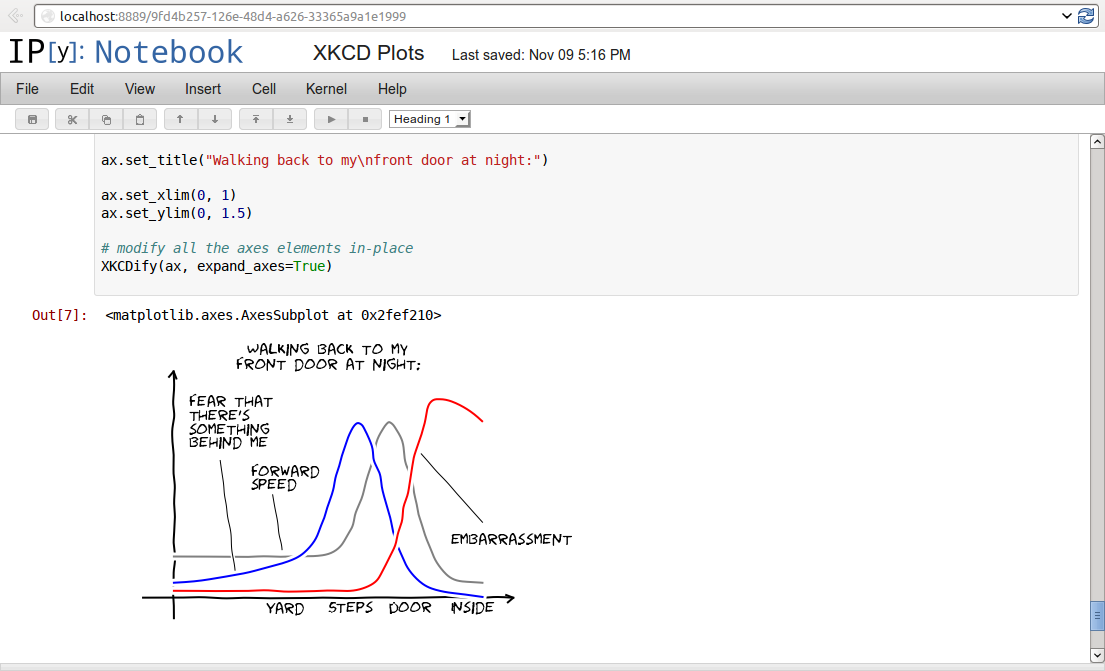 iPython using a web browser to display the notebook

Long ago, terminals could do much more exciting things than they do today. They supported various graphics protocols for rendering bitmap and vector graphics.

Check out libsixel and PySixel for some examples of what can be done with Sixel graphics. The terminal emulators mlterm and Tanasinn support this (among others). gnuplot and netpbm support Sixel output: 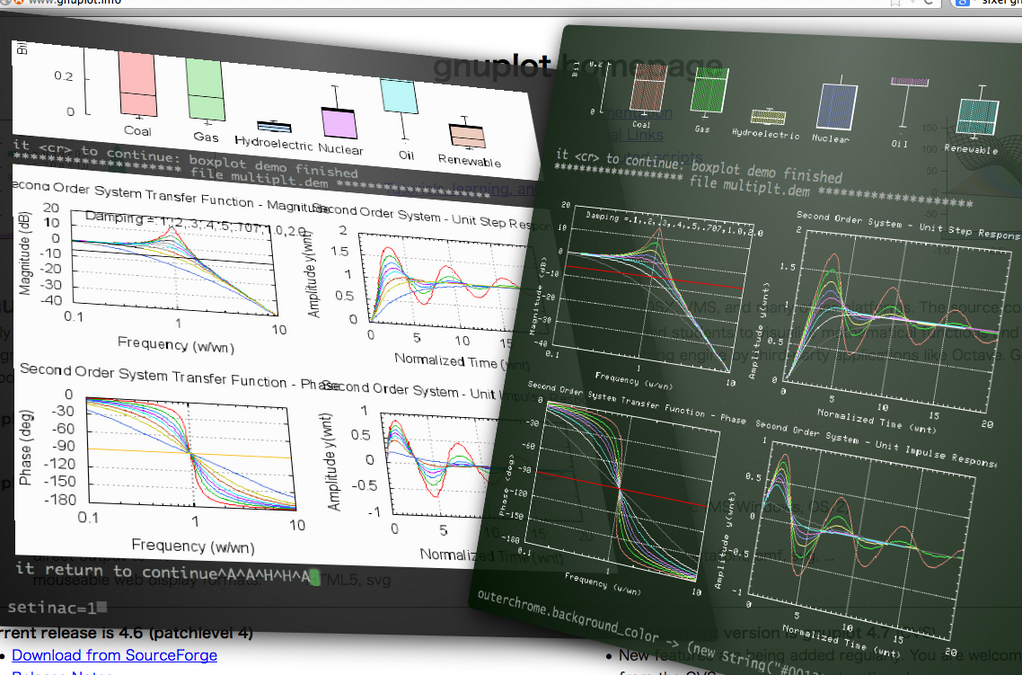 As an aside, it looks like Saitoha is on a personal mission to spread support for Sixel graphics and has done a lot of work in this area. That's awesome dedication!

There have been many interesting attempts to provide a rich terminal application for working with the Unix shell, especially with the advent of the web browser. An early example of a browser-backed shell was XMLterm. Since then, there has also been TermKit, which has since passed away. The author of XMLterm now works on GraphTerm.

While these are all interesting in their own ways, they are not terribly useful for the type of application that we're looking to build. These tend to assume that you're creating a new ecosystem surrounding replacing the Unix shell experience. 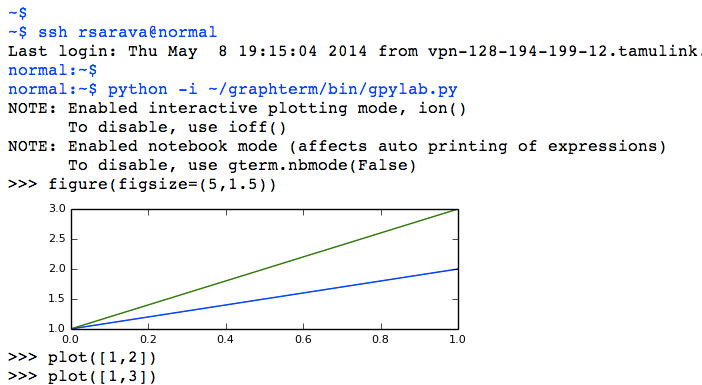 For now, this is mainly worth mentioning as a curiosity. I have no good links to point to examples of this. Many games in the 1980s and early 1990s had text input interfaces while the game itself would display graphics.

Some of the richest textual interfaces that I saw however were in some of the programmable MUDs, like LambdaMOO and similar systems. In these, the entire interface was both programmable and text-based. However, some systems supported early hypertext-capable clients such as Pueblo, TkMOO-light (with a plug-in) and research systems like Jupiter, the Jupiter Windowing system and TWin (which ran on top of out an out-of-band client/server communication protocol known as MCP).

There was a lot of interesting work in this area, much of it largely lost to the sands of time.

I found an old screenshot of a game client that we did with IE, a custom control for talking to the game server, and a whole lot of JavaScript and CSS back in 2002 or 2003: 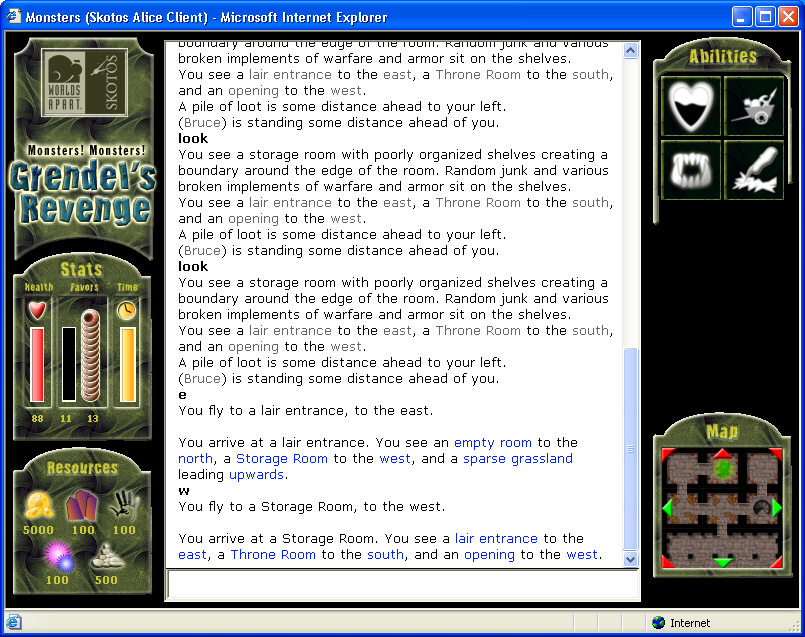 Another interesting aspect of textual interfaces in games is that they often required some formatting of the text itself. In some MOO and the Cold system that I mentioned above, we had a markup language for text that let us control how it was output for various terminal types. (In Cold, we supported plain telnet, ANSI text, HTML, Pueblo, and a couple of other custom outputs, like the screenshot from Grendel's Revenge above.) In Cold, we could provide links, various layout options (definition lists, bullet lists, tables, etc.) and the system would handle making sure everything looked good, that ANSI codes were used where appropriate, or that the right HTML tags were rendered.

Nowadays, one might use Markdown, ReStructuredText or other things to achieve some of the same effects, but not everything is possible with those.

For a simple example from the Cold help system, this markup:

Would render in plain text as:

We've just taken a brief look at a few different enriched textual user interfaces. There are surely many others or many details not covered above. I encourage you to write about them in your own blog posts!

I'll write soon about some applications that I'm working on and how we might be able to build upon some of the ideas that have come before as well as how we can take advantage of some of what exists today.