D compilation is too slow and I am forking the compiler

While working on my current project, the constant creep of increasing compilation times was becoming more and more noticeable. Even after throwing my usual tools at the problem, the total time was still over 7 seconds.

Compile time profiling showed that the blame lay with my liberal use of metaprogramming and std.regex, which I wasn’t willing to give up on. The usual approach to reducing D build times is to split the program into packages, compile one package at a time (to a static library or object file), use D “header” files (.di) to avoid parsing implementations more often than necessary, then link everything together. However, this was too much work, didn’t fit neatly into my existing toolchain, and I wanted to try something else.

C++ compilers handle a very similar problem with precompiled headers, in which the results of parsing header files is serialized and saved to disk in an implementation-defined format. D implementations do not have an analogous feature at the moment, but that still left me wondering:

But… what if we didn’t care about saving it to disk? Can we checkpoint the compiler as it’s parsing the files one-by-one, and rewind as necessary?

Hmm… If only there was some way to efficiently snapshot a process’s internal state, and rewind / resume it back to that point… Oh wait, there is – and it’s called fork(). Granted, not a typical use case, but still a promising idea to build on. Let’s get to work.

In order to correctly partially rebuild a D program, we need to know which parts need to be rebuilt. In our case, this comes down to knowing which files need to be recompiled when a certain file changes.

Luckily, DMD has us covered, as it can output dependency information in a plethora of formats. Great, let’s use that! Slurping the results of -deps gets us a directed graph like this:

As you can clearly see…

As you may have noticed, this graph has cycles. D does allow cyclic dependencies between modules (as long as at most one module in the cycle has static constructors), which is a problem for us as we can’t meaningfully snapshot the compiler in the middle of a cycle – we need to treat them as an all-or-nothing indivisible entity.

Fortunately, graph theory comes to the rescue, and we can use Kosaraju’s clever algorithm to separate the graph into strongly connected components. This simplifies the graph into a DAG:

Our job is not done yet. We need to flatten this DAG into a list, as we can’t meaningfully combine checkpoints in which one is not a parent of another. We can use topological sorting to get there:

Great! Now, we have a list of components, wherein each component is a group of files that we can compile together, and create a snapshot after each such component.

File modification times work nicely as a secondary sorting parameter: we can assume that more recently modified files are more likely to be modified again soon, so placing them in front of older files can save us from rebuilding older files (ranked equally dependency-wise).

(Implementation note: here I got lazy and used an О(n2) insertion sort for the topological/chronological sorting, though I’m sure a more efficient algorithm exists. As an additional curiosity, std.algorithm.sort won’t work here because it apparently expects a weak order for its predicate, while we only have a strict partial order – full credit to Feep on IRC for figuring this out.)

All the graph theory in the world will not help us in our endeavor if we can’t get the compiler to actually compile files one-by-one. Currently, DMD compiles source code in roughly the following order:

This is clearly unsuitable for us: we want to be able to perform as many steps as possible one file at a time.

Fortunately, we can coax the compiler in doing just that with a few relatively simple changes: instead of processing all files at once, read a group of them at a time, go through all the motions to compile it, and repeat.

Still, the third semantic pass does work serially (in my tests so far), and takes a significant part of compilation time, so this is still a win for us!

We’re getting to the meat of the subject: actually making use of fork() for snapshotting.

Note how the compilation order is the reverse of the topological order (we’ll get back to this in a bit). All snapshots except the first hold the result of compiling one module, plus all the modules before it; fork()’s CoW memory allows all snapshots to share memory pages for previous modules, thus not consuming extra RAM (though real results vary a bit due to fragmentation).

We are going to split our design into three parts:

Implementation-wise, our goals are:

The commands the driver program can send would then be:

Some optimizations we can do upon closer examination:

We also need a channel for snapshots to communicate with the fork-server, which we can do with a simple POSIX pipe. This brings the lifetime of the compiler process and its forks to the following:

A note on quitting: One thing you may notice from the above chart is that there is no explicit “quit” command; the quit signal is implicit when the other side of the pipe is closed. This is straight-forward in the case of the fork-server reading from the driver, but gets more interesting in case of snapshots.

Each snapshot implicitly keeps an open file descriptor to all snapshots before it. This is necessary so that when rewinding a snapshot causes it to be promoted to the current fork-server, said snapshot is able to rewind again to one of its ancestors. Now, when a fork server exits, only its immediate parent snapshot remains with zero processes on the other end of its control channel, which causes said snapshot to exit. However, as it exits, it also closes the only file on the read end of its immediate parent’s control channel as well. This creates a domino-like chain reaction in which all snapshots cause each other to exit in turn, up to whatever snapshot was currently promoted to the fork-server by rewinding, or all snapshots is case the driver closed its control connection. Fun!

Part 4 – Putting it all together

There is one final piece missing: a program to drive the fork-server, and tell it when and what to compile.

The driver needs to:

Note that dependency discovery needs to happen as a separate step from the compilation. This is because the compilation order of the two is reverse: when discovering dependencies, we must visit the compiled files “top-to-bottom” (i.e. program entry point down to the lowest dependency), which we can’t do in order for snapshots to work (as no part of dependent files may be read before the dependees are saved to a snapshot).

All together, the main loop of the driver is pretty simple. To put it in the context of the fork-server flowchart above:

Was it worth it? 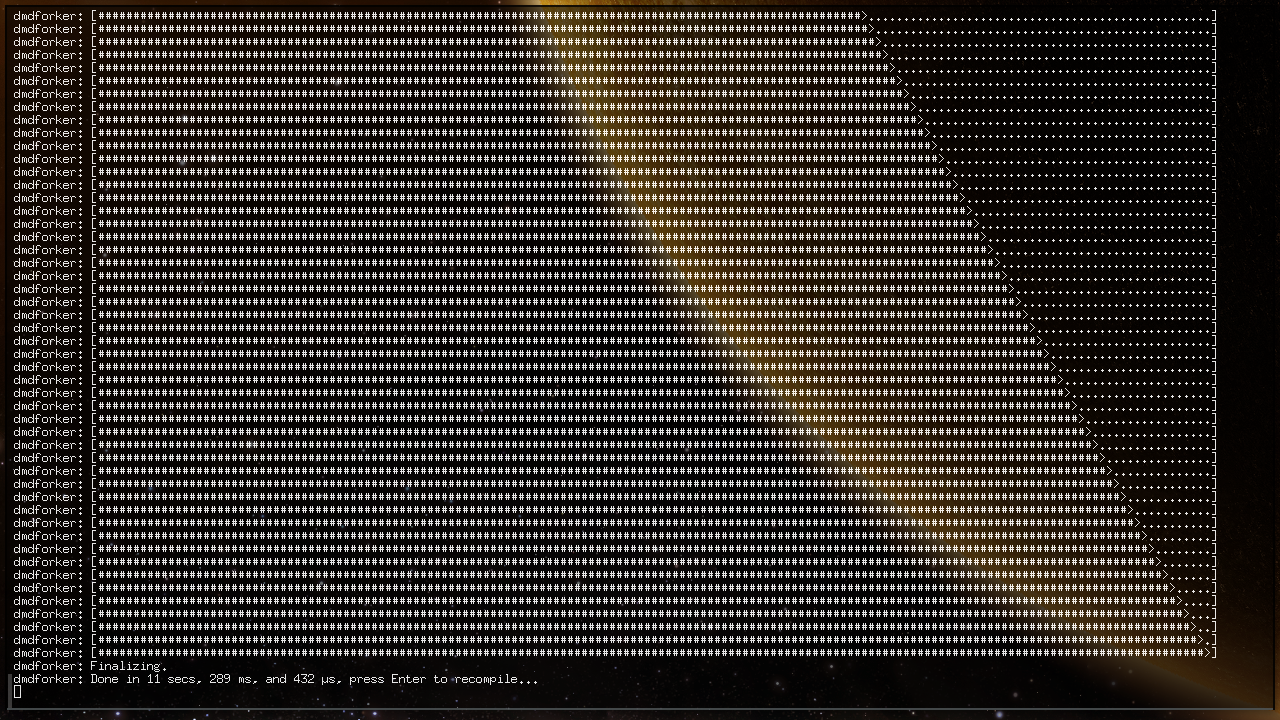 (Compilation takes a bit longer in this video as it’s using a debug DMD build.) The time savings are not spectacular, but still significant! (They would be even more significant if not for those pesky template instantiations…)

To try it yourself, check out the dmdforker branch in my dmd GitHub fork.

Q: How does this affect the integrity of the compilation process?

The question is multi-faceted:

Q: Isn’t all this a bit too much trouble to save 4 seconds on a 9-second compile?

Yes. This was an idea I was sitting on for a while, and decided to have a go implementing it given the opportunity. The technique might be useful for some truly larger projects, though, and might be applicable to compilers other than D, or processes other than compilation.

Q: Has this been done before?

Precompiled headers have been around for a long while, and the idea of using fork() for snapshots is not new, but I haven’t seen it used for the goal of speeding up compilation.

There exist debuggers capable of snapshotting / reverse execution, like Mozilla’s rr. However, fork():

Well, assuming there is interest to continue this hack of a weekend project: