The Punctured Myth of Sheryl Sandberg 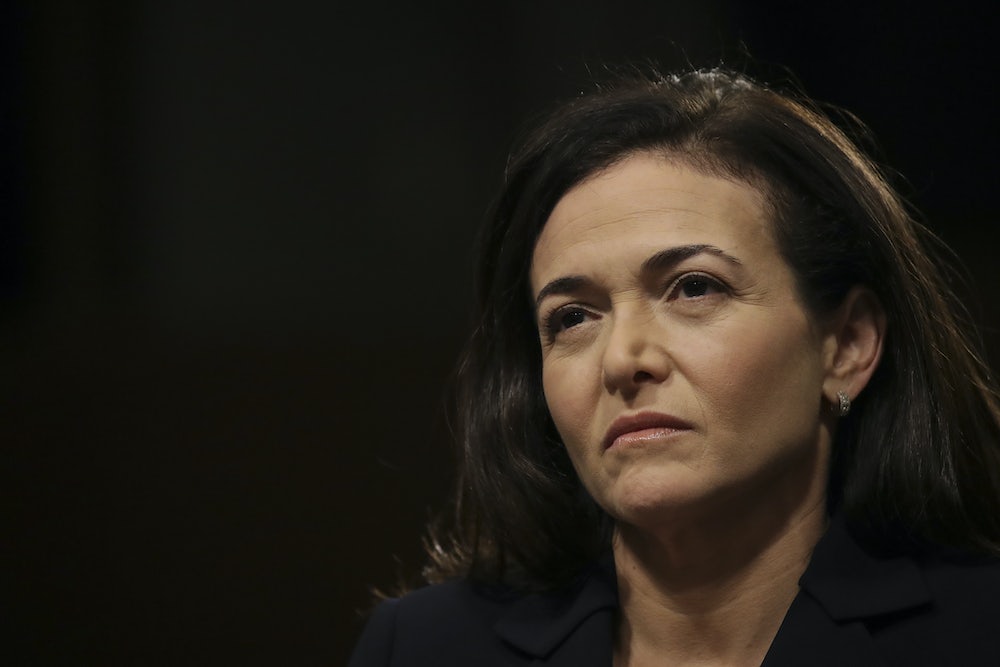 It’s been five years since Sheryl Sandberg, the chief operating officer of Facebook, published her manifesto, Lean In, urging women not to sell themselves short at work or doubt their ability to balance a family with a career. Though controversial, the book was a mega-bestseller, selling more than four million copies. It spawned a mini empire, with 40,000 mentoring circles and annual campaigns, and turned Sandberg into a celebrity executive: the face of a new brand of professional feminism.

Lean In was published when Sandberg was 43, and capped her impressive rise in the professional world. She began her career working closely with her mentor, Larry Summers, who taught her at Harvard. She worked with him at the World Bank and, later, at the Treasury Department. From there she went to Google, where she led the company’s online advertising efforts. In 2007, Sandberg met Mark Zuckerberg at a Christmas party, and he convinced her to jump ship.

The Facebook founder tasked Sandberg with a daunting goal: Make the company profitable. It took her just two years to do so. In 2017, Facebook made in $40 billion in advertising revenue, and today the company’s market capitalization is $400 billion. Sandberg also brought a corporate professionalism to the company. If Zuckerberg was the baby-faced tech visionary, Sandberg was lead adult in the room, taking care of Facebook’s economic and political needs. She has been so successful that she was rumored to be the frontrunner to lead the Treasury Department if Hillary Clinton had become president.

That sterling reputation took a serious blow this week. A report from The New York Times shows that, while Sandberg was building her global brand, she was using aggressive and underhanded tactics at Facebook. As the company faced increasing criticism and pressure over its handling of fake news, election interference, data abuse, and the incitement of ethnic violence and genocide, she embraced a strategy to suppress information about Facebook’s problems, discredit its critics, and deflect blame onto its competitors. She berated her security chief for being honest about the extent of the Russian campaign on the site. And she employed multiple crisis PR firms that spread fake news as a defense tactic, in one instance tying critics to the liberal billionaire, George Soros, a frequent subject of anti-semitic abuse online.

Sandberg leaned in, and then started throwing sucker-punches—a revelation that undermines the myth she spent years building about herself.

Before Sandberg’s arrival at Facebook, Zuckerberg was almost single-mindedly focused on the user experience. “There remained a profound corporate ambivalence toward advertising as the means for Facebook to become a real business,” David Kirkpatrick wrote in The Facebook Effect. But under Sandberg, targeted advertising became the company’s central focus and source of revenue.

“From the moment she arrived, Sandberg was the company’s top advertising champion and salesperson,” he wrote. “She had immense experience with advertisers from Google and a deep appreciation of the importance and potential of ads on the Net. According to some at Facebook, in her first weeks there was hardly anyone else at the company about whom the same could be said.” Facebook became profitable for the first time in 2010, and as it grew into one of the most powerful and profitable tech companies in the world, Sandberg received much of the credit.

Having turned Facebook into a money-making enterprise, Sandberg took over the reins from Zuckerberg, who increasingly spent time on extracurricular activities like last year’s “listening tour” across America. The Times’ portrayal of her leadership in his absence is damning. Its report opens with her “seething” over the fact that the company’s chief security officer, Alex Stamos, told its board that it had yet to deal with all of the Russian activity on its platform. “You threw us under the bus!” she reportedly yelled at him. (Stamos has since left the company.)

Sandberg played a central role in nearly every misdeed at Facebook that’s described in the Times piece. Singularly focused on the company’s stock price and its advertising-based business model, she worked to minimize data abuse and election interference. She employed a Republican-leaning crisis PR firm to attack the company’s critics, and opted to do little to address the company’s rampant fake news problem, fearing that it would anger conservative users.

Sandberg also hired lobbyists to pester Democratic senators who dared criticize the company and its business model, and to push terrible pieces of legislation like the Stop Enabling Sex Traffickers Act, which has endangered the safety of sex workers, in an attempt to woo skeptical Republicans. She worked to minimize regulation that could have helped the company fight bad actors, but would damage its business model. “While Facebook had publicly declared itself ready for new federal regulations, Ms. Sandberg privately contended that the social network was already adopting the best reforms and policies available,” the Times reported. “Heavy-handed regulation, she warned, would only disadvantage smaller competitors.”

This was, to an extent, what Sandberg was hired to do: grow the business, protect the bottom line, and avoid onerous regulation. Using dirty tactics to accomplish these goals is a widely accepted practice in corporate America. But Zuckerberg and Sandberg have repeatedly insisted that they were new kinds of executives leading a new kind of company. When Facebook hit a snag in the past, they beseeched their users—a significant percentage of the public—to trust them.

It’s unclear if Sandberg thought that she would get away with, for instance, smearing critics by associating them with Soros. Zuckerberg told reporters on Thursday that he and Sandberg were not aware of the actions being taken by the PR firms employed by Facebook. Sandberg released a statement on Facebook on Thursday in which she also denied that she attempted to block investigations into Russian interference.

“On a number of issues—including spotting and understanding the Russian interference we saw in the 2016 election—Mark and I have said many times we were too slow,” she wrote. “But to suggest that we weren’t interested in knowing the truth, or we wanted to hide what we knew, or that we tried to prevent investigations, is simply untrue. The allegations saying I personally stood in the way are also just plain wrong. This was an investigation of a foreign actor trying to interfere in our election. Nothing could be more important to me or to Facebook.”

But what did Sandberg expect when she hired a Republican opposition-research firm? It was a short-sighted response that will have long-term consequences, for both Facebook and Sandberg. In her Facebook post, Sandberg denied any knowledge of the company or its work. “I did not know we hired them or about the work they were doing, but I should have,” she wrote. “I have great respect for George Soros—and the anti-Semitic conspiracy theories against him are abhorrent.” But the damage is done. “Now we know Facebook will do whatever it takes to make money,” Rishad Tobaccowala, chief growth officer for the Publicis Groupe, told The New York Times. “They have absolutely no morals.”

Sandberg and Facebook could have opted for a different strategy, one that embraced transparency while the company explored business models that would leave it less vulnerable to misinformation campaigns, fake news, conspiracy theories, and political division in general. But she opted for a shadowy, bare-knuckled fight to protect the company’s lucrative advertising business. In the process, she made it clear that she was just another cutthroat executive leading just another cutthroat company.