Just yesterday, K2 (8611) was the last of the 14 8000-meter peaks on Earth that had yet to be climbed in winter. No more. At 5 p.m. January 16, a group of 10 Nepali/Sherpa climbers from separate expeditions ascended the last few meters to the summit together as one.

"Finally we did it. We made the history in [the] mountaineering field," Mingma Gyalje ("Mingma G") Sherpa posted on Facebook hours ago.

THE IMPOSSIBLE IS MADE POSSIBLE! #K2winter—History made for mankind, History made for Nepal! At 17:00 hrs local time @nimsdai and team summited K2, teaming up with Mingma G and team and a member from SST, Sona Sherpa. A very special moment. The whole team waited 10 meters below the summit to form a group then stepped onto the summit together whilst singing our Nepalese National Anthem. We are proud to have been a part of history for humankind and to show that collaboration, teamwork and a positive mental attitude can push limits to what we feel might be possible. 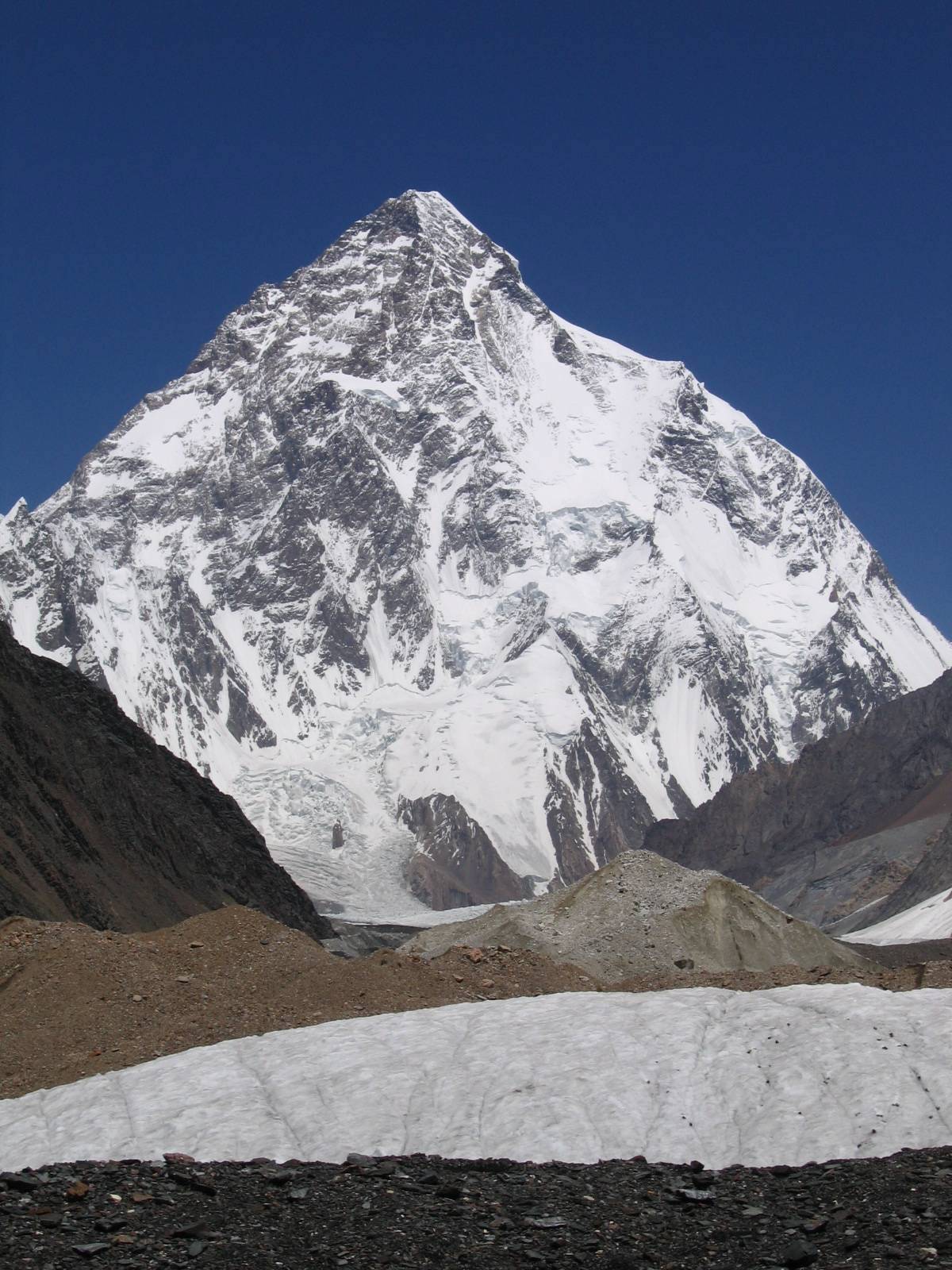 K2 (8611m) as seen in summer. The Abruzzi Spur—the route of the first ascent by Italians in 1954 and the route used for the first winter ascent on January 16, 2021, by 10 Nepali climbers—follows the right-hand skyline. [Photo] Svy123, Wikimedia Commons

Alan Arnette reported on his blog:

All ten climbers stopped 30-feet below the summit on a relatively safe spot (still on a 40-degree snow slope at 28,200-feet) so that they could summit together in a sign of solidarity. No individual was listed as first.

Lead by Mingma Gyalje Sherpa, Nirmal Purja Pun Magar aka "Nimsdai" and eight Sherpas...they took advantage of a short weather window when winds were under 10 mph—unheard of for K2's summit in the summer, much less the winter. They are said to be descending now.

In 2015 Mingma G was part of what was likely the first all-Sherpa team to complete first ascents of unclimbed 6000-meter peaks in their home country. The team summited three peaks, and in November Mingma G went on to complete a solo first ascent of a new route on Khang Tagri (Chobutse; 6685m), a mountain he'd looked up to while growing up in Nepal's Rolwaling Valley. After thirteen hours of climbing, he reached the summit ridge and followed it to the top. He descended the easier back side in a whiteout, getting lost in the snowstorm and spending two nights bivouacked in snow holes before being rescued by a helicopter, which brought him down to his village where his mother, sister, and friends waited.

Mingma G wrote a story about the beginning of his career and his solo ascent on Khang Tagri that was published in Alpinist 53 (Spring 2016). A passage reads:

We Sherpas have always regarded mountains as deities. Khang Tagri, in particular, is special to me because I've seen it since childhood. When we were little, my friends and I listened to older villagers share tales of expeditions on 8000-meter peaks. We played climbing games on nearby rocks and sang the popular song, "Hamro Tenzing Sherpale Chadyo Himal Chuchura," about Tenzing Norgay Sherpa's first ascent of Everest, or as we call it, Chomolungma.

As far back as I can remember, I wanted to climb a big mountain myself. My father and my grandfather had both worked as guides. In 2006 I graduated from a school in Kathmandu, and my uncle let me join his staff when he led a Japanese team to Manaslu. Although I had to learn everything during the ascent, I reached 7300 meters. A year later, I got a chance to climb Everest. After I'd proved myself on the world's highest mountain, other expeditions wanted to hire me.

In the 2015 newswire, Green quoted Dawa Gyalje Sherpa: "We are hoping as young climbers, to take climbing in Nepal to a new level. All of us have climbed much bigger mountains but always with foreign climbers. We want to show that we are not just porters on the mountain, climbing only for our livelihood, but we are interested in climbing because we enjoy it, too.... We are the young generation of Sherpa climbers but we are looking to the future of Nepal and Sherpas also."

A recent interview with Alex Gavan, a Romanian climber who is currently also trying to summit K2 with Italian alpinist Tamara Lunger, provides his perspective about prior events and ongoing attempts on the mountain during winter.

"Anyone [who can] stand on the summit this season, with or without oxygen, will not do so individually but [because of] the combined effort of everyone working hard on the mountain, from the people [fixing ropes] to the kitchen staff in base camp and the local porters [who helped carry] the gear to the base camp," Gavan told Alpinist.