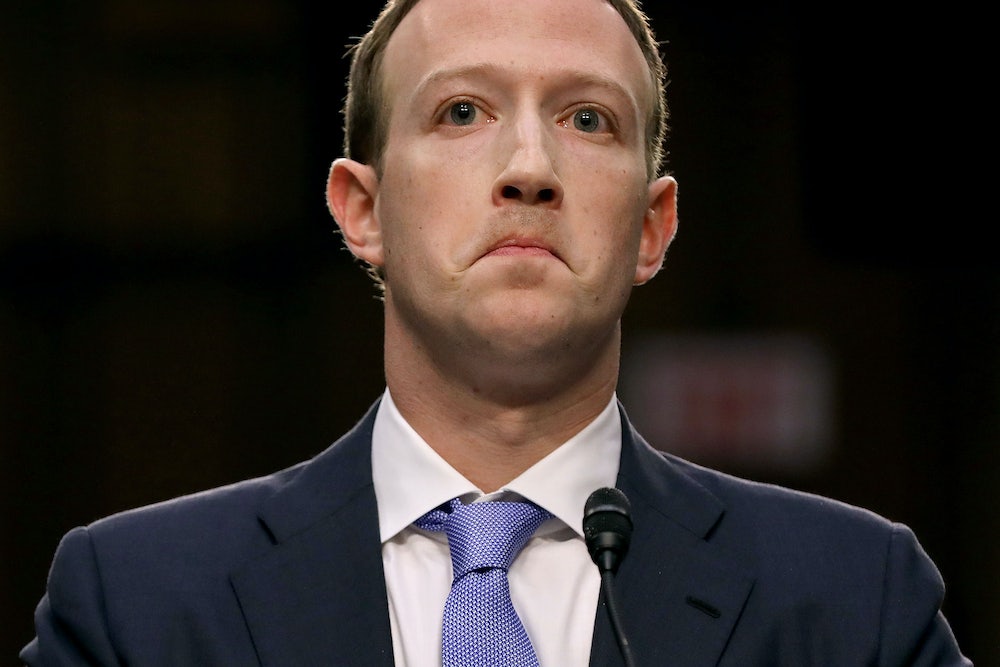 Seven months ago, Mark Zuckerberg sat before Congress and said he was sorry about the fake news and the data breaches—and that it wasn’t really Facebook’s fault. The company’s founder and CEO had been hauled before Congress to answer for what became known as the Cambridge Analytica scandal, in which a political consulting firm harvested Facebook data to sow electoral discord to help elect Donald Trump. Zuckerberg, appearing contrite before members of the House and Senate, insisted that Facebook’s flaws stemmed from the company’s commitment to free discourse and improving the world. “Facebook is an idealistic and optimistic company,” he said. “For most of our existence, we focused on all the good that connecting people can bring. ... But it’s clear now that we didn’t do enough to prevent these tools from being used for harm as well.”

But a New York Times report published on Wednesday tells a different story. While Zuckerberg was sitting doe-eyed before Congress, insisting that Facebook only wants to connect people, his company was in fact imitating some of the worst behavior on Facebook to counter the barrage of negative stories the company was facing.

Zuckerberg may have insisted that all of the criticism of Facebook was a byproduct of the company’s core mission, but a crisis PR firm contracted by Facebook linked the site’s critics to George Soros, the liberal Jewish billionaire who is often at the center of right-wing attacks and anti-Semitic conspiracy theories. At the same time, top executives, notably Chief Operating Officer Sheryl Sandberg, were discouraging it from investigating Russian activity on the site.

This response exposes the hypocrisy at the center of the company: While Zuckerberg was promising to return to the company’s utopian vision of bringing humanity closer together, it was doing everything it could to sow division, all in order to steer clear of negative coverage and eventual regulation.

Facebook has been flooded with negative stories since 2016. First, there was its role in the president election, when Russian agents used the platform to spread narratives designed to increase support for Trump and hurt Hillary Clinton. Over the next two years, the ease with which Facebook could be gamed to spread false and divisive stories was demonstrated again and again. The social network became complicit in at least one genocide, in Myanmar, and has been shown again and again to benefit bad actors and dictators—and to just make people unhappy in general. At the same time, the company’s efforts to curb the flow of fake and biased news have been met with furious criticism from the right.

Speaking to Congress, Zuckerberg repeatedly returned to the narrative that Facebook is a net good for humanity. It brings people together and helps them share their stories, he argued. It plays a central role in improving quality of life on an unprecedented, global scale. “My top priority has always been our social mission of connecting people, building community and bringing the world closer together. Advertisers and developers will never take priority over that as long as I’m running Facebook,” he said, dismissing his company’s main source of revenue—targeted advertising—as a negative externality.

While Zuckerberg was traveling the country, posing with cows, apologizing for Facebook’s missteps, and pushing the idea that the platform existed to pull people together rather than pull them apart, Facebook executives were engaged in a furious strategy to protect it:

While Mr. Zuckerberg conducted a public apology tour in the last year, Ms. Sandberg has overseen an aggressive lobbying campaign to combat Facebook’s critics, shift public anger toward rival companies and ward off damaging regulation. Facebook employed a Republican opposition-research firm to discredit activist protesters, in part by linking them to the liberal financier George Soros. It also tapped its business relationships, persuading a Jewish civil rights group to cast some criticism of the company as anti-Semitic.

The Times piece reveals Facebook executives and lobbyists’ campaign of deflection. They pushed the intelligence community not to challenge the company’s response to Russian interference and worked media organizations to push negative stories about the privacy failings of their competitors, such as Google and Apple. Executives berated employees for investigating Russian interference, with Sandberg telling them it “exposed the company legally.” Other executives warned that the extent of Russian interference would be bad for the company politically, because it would reinforce narratives about the 2016 election, while potentially alienating users who had been deceived by fake news. Zuckerberg and Sandberg “ignored warning signs” of data misuse “then sought to conceal them from view” once they were revealed, according to the Times.

Those who pushed the company to take action were warned that it would only result in political backlash from the right, with former Bush administration deputy chief of staff Joel Kaplan, Facebook’s vice president of global public policy, telling employees that “if Facebook implicated Russia further... Republicans would accuse the company of siding with Democrats.” Any action, moreover, could alienate conservative users of the site. According to the Times, Kaplan said that “if Facebook pulled down the Russians’ fake pages, regular Facebook users might also react with outrage at having been deceived: His own mother-in-law, Mr. Kaplan said, had followed a Facebook page created by Russian trolls.”

Kaplan has a point, to an extent. Republicans made a fuss after Facebook (and Twitter) made minor changes aimed at curbing misinformation. Republicans, including Trump, have suggested that conservatives are being “shadow-banned” from social media platforms, while others have suggested tech companies are working to suppress conservative viewpoints. There is no evidence that they are, but the narrative has taken hold. That doesn’t excuse Facebook’s actions. But it was out of fear of conservative backlash that Facebook avoided taking meaningful action to make its platform more secure and less toxic.

The Times investigation is a damning portrait of a company in crisis, and puts Zuckerberg’s testimony before Congress in a harsher light. He repeatedly highlighted the work that the company was doing to combat data breaches, the spread of fake news, and electoral influence. In reality, he was paying a firm to push the exact kind of conspiracy theory that Facebook has been criticized of propagating. The depth of Zuckerberg’s insincerity is all too clear: He’s only interested in doing the bare minimum, and his company has proven incapable of self-regulation. Congress was slow to realize as much back in April, but it no longer has any excuse for not bringing the full weight of the law against one of America’s most arrogant, unaccountable monopolies.