By Wikipedia Contributors
24 - 31 minutes
For the genus of perennial herbs in the nightshade family, see Chamaesaracha.
"FVEY" redirects here. For the album by Shihad, see FVEY (album).

The Five Eyes, often abbreviated as FVEY, is an intelligence alliance comprising Australia, Canada, New Zealand, the United Kingdom and the United States. These countries are parties to the multilateral UKUSA Agreement, a treaty for joint cooperation in signals intelligence.[1][2][3]

The origins of the FVEY can be traced back to the post–World War II period, when the Atlantic Charter was issued by the Allies to lay out their goals for a post-war world. During the course of the Cold War, the ECHELON surveillance system was initially developed by the FVEY to monitor the communications of the former Soviet Union and the Eastern Bloc, although it is now used to monitor billions of private communications worldwide.[4][5]

In the late 1990s, the existence of ECHELON was disclosed to the public, triggering a major debate in the European Parliament and, to a lesser extent, the United States Congress. As part of efforts in the ongoing War on Terror since 2001, the FVEY further expanded their surveillance capabilities, with much emphasis placed on monitoring the World Wide Web. The former NSA contractor Edward Snowden described the Five Eyes as a "supra-national intelligence organisation that does not answer to the known laws of its own countries".[6] Documents leaked by Snowden in 2013 revealed that the FVEY have been spying on one another's citizens and sharing the collected information with each other in order to circumvent restrictive domestic regulations on surveillance of citizens.[7][8][9][10]

In spite of continued controversy over its methods, the Five Eyes relationship remains one of the most comprehensive known espionage alliances in history.[11] 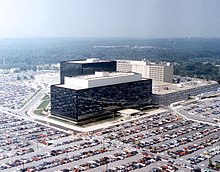 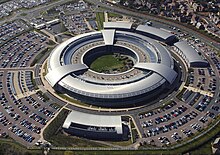 Since processed intelligence is gathered from multiple sources, the intelligence shared is not restricted to signals intelligence (SIGINT) and often involves defence intelligence as well as human intelligence (HUMINT) and geospatial intelligence (GEOINT). The following table provides an overview of most of the FVEY agencies involved in such forms of data sharing.[1] 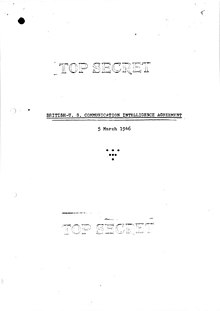 The cover page of the first version of the secret UKUSA Agreement in 1946, which was disclosed to the public in 2011.

The origins of the Five Eyes alliance can be traced back to the Atlantic Charter, which was issued in August 1941 to lay out the Allied goals for the post-war world. On 17 May 1943, the British–U.S. Communication Intelligence Agreement, also known as the BRUSA Agreement, was signed by the UK and U.S. governments to facilitate co-operation between the U.S. War Department and the British Government Code and Cypher School (GC&CS). On 5 March 1946, the secret treaty was formalized as the UKUSA Agreement, which forms the basis for all signal intelligence cooperation between the NSA and the GCHQ to this day.[12][13]

In 1948, the treaty was extended to include Canada, followed by Norway (1952), Denmark (1954), West Germany (1955), Australia (1956), and New Zealand (1956).[13] These countries participated in the alliance as "third parties". By 1955, the formal status of the remaining Five Eyes countries was officially acknowledged in a newer version of the UKUSA Agreement that contained the following statement:

At this time only Canada, Australia and New Zealand will be regarded as UKUSA-collaborating Commonwealth countries.[13]

The "Five Eyes" term has its origins as a shorthand for a "AUS/CAN/NZ/UK/US EYES ONLY" (AUSCANNZUKUS) classification level.[14]

During the Cold War, the GCHQ and the NSA shared intelligence on the Soviet Union, the People's Republic of China, and several eastern European countries (known as Exotics).[15] Over the course of several decades, the ECHELON surveillance network was developed to monitor the military and diplomatic communications of the Soviet Union and its Eastern Bloc allies.[16]

During the Vietnam War, Australian and New Zealand operators in the Asia-Pacific region worked directly to support the United States, while GCHQ operators stationed in the (then) British colony of Hong Kong were tasked with monitoring North Vietnamese air defence networks.[17][18] During the Falklands War, the British received intelligence data from its FVEY allies such as Australia, as well as from third parties such as Norway and France.[19][20][21] In the aftermath of the Gulf War, a technician of the ASIS was used by SIS to bug Kuwaiti government offices.[20]

By the end of the 20th century, the ECHELON surveillance network had evolved into a global system capable of sweeping up massive amounts of private and commercial communications, including telephone calls, fax, e-mail and other data traffic. This was done through the interception of communication bearers such as satellite transmission and public switched telephone networks.[34]

The Five Eyes has two types of information collection methods: the PRISM program and the Upstream collection system. The PRISM program gathers user information from technology firms such as Google, Apple and Microsoft, while the Upstream system gathers information directly from the communications of civilians via fiber cables and infrastructure as data flows past.[citation needed] In 1988, Duncan Campbell revealed in the New Statesman the existence of ECHELON, an extension of the UKUSA Agreement on global signals intelligence [Sigint]. The story, 'Somebody's listening,' detailed how the eavesdropping operations were not only being employed in the interests of 'national security,' but were regularly abused for corporate espionage in the service of US business interests. The piece passed largely unnoticed outside of journalism circles.[35] In 1996, a detailed description of ECHELON was provided by New Zealand journalist Nicky Hager in a book titled "Secret Power – New Zealand's Role in the International Spy Network", which was cited by the European Parliament in a 1998 report titled "An Appraisal of the Technology of Political Control" (PE 168.184).[36] On 16 March 2000, the Parliament called for a resolution on the Five Eyes and their ECHELON surveillance network, which, if passed, would have called for the "complete dismantling of ECHELON".[37]

Three months later, the Temporary Committee on ECHELON was set up by the European Parliament to investigate the ECHELON surveillance network. However, according to a number of European politicians such as Esko Seppänen of Finland, these investigations were hindered by the European Commission.[38]

In the United States, congressional legislators warned that the ECHELON system could be used to monitor U.S. citizens.[39] On 14 May 2001, the U.S. government cancelled all meetings with the Temporary Committee on ECHELON.[40]

According to a BBC report in May 2001, "the US Government still refuses to admit that Echelon even exists".[16]

In the aftermath of the September 11 attacks on the World Trade Center and the Pentagon, the surveillance capabilities of the Five Eyes were greatly increased as part of the global War on Terror.

During the run-up to the Iraq War, the communications of UN weapons inspector Hans Blix were monitored by the Five Eyes.[41][42] The office of UN Secretary-General Kofi Annan was bugged by British agents.[43][44] An NSA memo detailed plans of the Five Eyes to boost eavesdropping on UN delegations of six countries as part of a "dirty tricks" campaign to apply pressure on these six countries to vote in favour of using force against Iraq.[43][45][46]

SIS and the CIA forged a surveillance partnership with Libya's ruler Muammar Gaddafi to spy on Libyan dissidents in the West, in exchange for permission to use Libya as a base for extraordinary renditions.[47][48][49][50][51]

As of 2010[update], the Five Eyes also have access to SIPRNet, the U.S. government's classified version of the Internet.[52]

In March 2014, the International Court of Justice (ICJ) ordered Australia to stop spying on East Timor. This marks the first time that such restrictions are imposed on a member of the FVEY.[60]

The Five Eyes alliance is sort of an artifact of the post World War II era where the Anglophone countries are the major powers banded together to sort of co-operate and share the costs of intelligence gathering infrastructure. … The result of this was over decades and decades some sort of a supra-national intelligence organisation that doesn't answer to the laws of its own countries.

In recent years, documents of the FVEY have shown that they are intentionally spying on one another's citizens and sharing the collected information with each other in order to circumvent restrictive domestic regulations on spying. [7][8][9][10][61] Shami Chakrabarti, the director of the advocacy group Liberty, claimed that the FVEY alliance increases the ability of member states to "subcontract their dirty work" to each other.[62] The former NSA contractor Edward Snowden described the FVEY as a "supra-national intelligence organisation that doesn't answer to the laws of its own countries".[6]

As a result of Snowden's disclosures, the FVEY alliance has become the subject of a growing amount of controversy in parts of the world:

While the Five Eyes is a very specific agreement with specific operations amongst the five nations, other non-FVEY sharing agreements have been set up independently and for specific purposes. For example, according to Edward Snowden, the NSA has a "massive body" called the Foreign Affairs Directorate that is responsible for partnering with foreign countries.[71]

According to the news magazine L'Obs, in 2009, the United States proposed to France to join the Five Eyes, that would then have become the "Six Eyes". Nicolas Sarkozy however made the requirement to be granted the same status as other allies, including the signing of a "no-spy agreement". This requirement was approved by the director of the NSA, but not by the director of the CIA, and furthermore not by President Barack Obama, resulting in a refusal from France.[72]

Israel is, reportedly, an observer in Five Eyes.[76]

Singapore is reported to have partnered with the Five Eyes.[77] 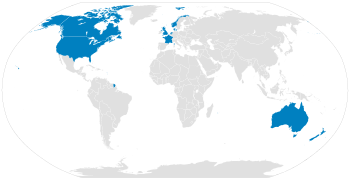 A map of the Nine Eyes countries

The Nine Eyes is a different arrangement that consists of the same members of Five Eyes working with Denmark, France, the Netherlands and Norway.[69][70] 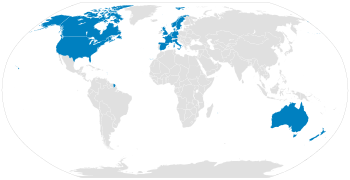 A map of the Fourteen Eyes countries

According to a document leaked by Edward Snowden, there is another working agreement amongst 14 nations officially known as SIGINT Seniors Europe, or "SSEUR".[78] These "14 Eyes" consist of the same members of 9 Eyes plus Belgium, Germany, Italy, Spain and Sweden.[69][70]

As spelled out by Privacy International, there are a number of issue-specific intelligence agreements that include some or all the above nations and numerous others, such as:[79][80]

As the surveillance capabilities of the FVEY continue to increase to keep up to pace with technological advancements, a global surveillance system has been gradually developed to capture the communications of entire populations across national borders.[81] The following list contains a handful of targets of the FVEY who are public figures in various fields. In order for a person to be included in the list, there must be well-documented evidence based on reliable sources, such as leaked or declassified documents or whistleblower accounts, which demonstrate that the person involved is, or was, intentionally targeted for FVEY surveillance.