Pfizer’s Covid-19 vaccine passed a critical milestone on Thursday when a panel of experts formally recommended that the Food and Drug Administration authorize the vaccine. The agency is likely to do so within days, giving health care workers and nursing home residents first priority to begin receiving the first shots early next week.

The F.D.A.’s vaccine advisory panel, composed of independent scientific experts, infectious disease doctors and statisticians, voted 17 to 4, with one member abstaining, in favor of emergency authorization for people 16 and older. With rare exceptions, the F.D.A. follows the advice of its advisory panels.

With this formal blessing, the nation may finally begin to slow the spread of the virus just as infections and deaths surge, reaching a record of more than 3,000 daily deaths on Wednesday. The F.D.A. is expected to grant an emergency use authorization on Saturday, according to people familiar with the agency’s planning, though they cautioned that last-minute legal or bureaucratic requirements could push the announcement to Sunday or later.

The initial shipment of 6.4 million doses will leave warehouses within 24 hours of being cleared by the F.D.A., according to federal officials. About half of those doses will be sent across the country, and the other half will be reserved for the initial recipients to receive their second dose about three weeks later.

The arrival of the first vaccines is the beginning of a complex, monthslong distribution plan coordinated by federal and local health authorities, as well as large hospitals and pharmacy chains, that if successful, will help return a grieving and economically depressed country back to some semblance of normal, maybe by summer.

“With the high efficacy and good safety profile shown for our vaccine, and the pandemic essentially out of control, vaccine introduction is an urgent need,” Kathrin Jansen, a senior vice president and the head of vaccine research and development at Pfizer, said at the meeting.

The vote caps a whirlwind year for Pfizer and its German partner BioNTech, which began working on the vaccine 11 months ago, shattering all speed records for vaccine development, which typically takes years. It is also a triumph for the F.D.A., which has upheld its reputation as the world’s gold standard for drug reviews despite months of political pressure from President Trump, who has sought to tie his political fortunes to the success of a vaccine. The Pfizer vaccine has already been given to people in Bahrain and Britain, where it was authorized on Dec. 2. Canada approved it on Wednesday.

The U.S. authorization of Pfizer’s vaccine is expected to be followed soon by one for Moderna’s version, which uses similar technology and has also shown promising results in clinical trials. Operation Warp Speed, the Trump administration’s multi-billion-dollar program to fast-track vaccine development, pre-ordered 100 million doses of Pfizer’s vaccine in July and heavily backed the development and manufacturing of Moderna’s vaccine.

More than 100 F.D.A. employees have worked nearly round the clock to review the application Pfizer submitted on Nov. 20, compressing months of analysis into weeks as they pored over thousands of pages of clinical trial and manufacturing data.

Earlier this week, career scientists at the F.D.A. published an analysis showing the vaccine worked across a variety of demographic groups and that it was somewhat effective even after the first of two doses.

During the daylong meeting on Thursday, panel members peppered company and agency experts with detailed questions about the safety and efficacy of the vaccine, which was found to be 95 percent effective in a late-stage clinical trial. Some members expressed concern that there was not enough data from 16- and 17-year-olds to know whether the vaccine would help them, but the committee decided the benefits for that group outweighed the risks.

One of the panel members, Dr. Paul Offit of the Children’s Hospital of Philadelphia, said he feared that statements by British regulators as well as remarks by Moncef Slaoui, a top U.S. vaccine official, could lead “tens of millions” of people with severe allergies to reject the vaccine even though evidence of a link to the shots was unclear. He asked Pfizer to conduct a separate study of people with a history of severe allergies, because “this issue is not going to die until we have better data.”

The F.D.A. said that it had asked Pfizer to include allergic reactions in its safety tracking plan and would include a warning in its instructions on the use of the vaccine.

One of the most hotly contested issues was how the broad authorization of the vaccine might affect the continuing clinical trial. Some experts have argued that, ethically, trial volunteers who received a placebo should be offered the vaccine once it is authorized, but others worried that move could tarnish the long-term results of the trial.

During the public portion of the meeting, consumer and public health advocates largely pushed the agency to authorize the vaccine, noting the urgency of the pandemic. One speaker, who identified himself as Kermit Kubitz, noted that he had no conflicts of interest to declare except for “a lot of elderly relatives.”

“They need this vaccine yesterday,” he said. 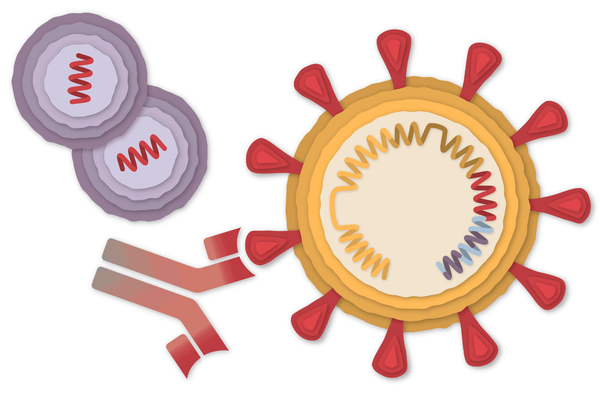 Two shots can prime the immune system to fight the coronavirus.

But advocates also asked regulators to be transparent about potential safety issues and to closely track the vaccine once it becomes available. Several said such measures were necessary to reassure a public that is hesitant to take a new vaccine, particularly Black and Native American people who have historically been mistreated by the medical community. “Before authorization is granted, affected communities need to have confidence that the vaccine is safe and effective,” said Sarah Christopherson of the National Women’s Health Center.

By insisting that the advisory committee vote on any vaccine, regulators created a shield against White House pressure to approve a product before the presidential election. When the panelists met in October to discuss the F.D.A.’s guidelines for approving Covid-19 vaccines, they urged the agency to take its time and cautioned that rushing the process could risk missing vital safety data and further erode public trust.

The scene that played out on Thursday — in which outside experts spent hours engaging government officials in an intense but often highly technical discussion about vaccine science — did not always make for exciting viewing. But the circumstances were certainly dramatic, as the experts were being asked to carefully weigh the risks and benefits of the vaccine, even as the United States reached the grim milestone of recording more than 3,000 Covid deaths on Wednesday and as thousands of people in Britain had already received it.

The F.D.A. has struggled, internally and externally, to move fast on its vaccine and treatment deliberations in order to curb the deadly virus’s spread — but not so fast as to undermine public confidence. It was a thin line to walk, and not helped by the torrent of troubling accusations by Mr. Trump and his advisers that the agency was moving too slowly.

Just days before Pfizer submitted its application, the company sent an enormous tranche of manufacturing data to the F.D.A. — including materials on how it was scaling up production — leaving regulators scrambling to evaluate it in time for a possible authorization.

As part of its oversight, the F.D.A. also had teams review company production facilities and clinical trial sites, where they verified that records corresponded to the accounts Pfizer had submitted to federal regulators.

At the same time, regulators were evaluating an equally complex emergency authorization application submitted by Moderna, whose data will be examined publicly during another F.D.A. outside advisory meeting next week.

As the coronavirus vaccine get closer to U.S. authorization, here are some questions you may be wondering about:

Regulators sometimes received documents from the companies as late as midnight and worked through the Thanksgiving holiday. Dr. Peter Marks, the top vaccine regulator at the F.D.A., joked last week at an event hosted by the American Medical Association that his team ate turkey sandwiches while examining documents.

“Among all global regulators, we are the ones that actually don’t just look at the company’s tables. We actually get down and dirty and we look at the actual adverse event reports, the bad spelling errors that are made by physicians sometimes, et cetera,” he said at the event.

Dr. Stephen M. Hahn, the F.D.A. commissioner, kept a careful distance from the review, according to people familiar with it.

Dr. Hahn had caved to pressure earlier in the summer to authorize an old malaria drug, hydroxychloroquine, for use in Covid patients even though there was little evidence that it worked. That decision was reversed after the agency found the drug was unlikely to be effective in Covid patients and carried a risk of potentially dangerous side effects. And Dr. Hahn faced withering criticism from the scientific community after he exaggerated the benefits of another treatment, convalescent plasma, an error he later corrected.

Mr. Trump accused agency officials of being part of the “deep state” and hinted that a vaccine could come before “a very special day” — Election Day. The F.D.A.’s reputation appeared to be headed in the same direction as that of the Centers for Disease Control and Prevention, which was widely criticized for not standing up to the president.

But senior regulators — and eventually Dr. Hahn himself — pushed back. The agency’s top career officials published an opinion piece in USA Today, acknowledging that the F.D.A.’s integrity had been called into question and insisting that they would “follow the science” during the pandemic. The agency prevailed in a battle with the White House over imposing more stringent guidelines for companies developing Covid vaccines.

“In this sort of environment, where there has been so much pressure and concern, the process does provide an important check and balance,” said Dr. Jesse L. Goodman, who previously served as the F.D.A.’s chief scientist. Holding an open meeting also allows the public to “be sure that a broader scientific and clinical community is comfortable with the decision.”

On Tuesday, the president held a summit intended to showcase the administration’s role in developing a vaccine. “We are just days away from authorization from the F.D.A. and we’re pushing them hard,” Mr. Trump said at the event.

Many health care workers around the country are already raring to get the vaccine. Dr. Andrew Barros, a critical care physician in Charlottesville, Va., who is scheduled to get his Pfizer shot at 2:30 p.m. on Dec. 15, said he was “looking forward to having a sore arm and hopefully being one step closer to having Covid under control.”

Pfizer’s clinical trial will continue even after its vaccine is authorized by the F.D.A., and the company and F.D.A. will continue to watch for safety concerns.

Pfizer said on Thursday that it planned to apply for full approval in April 2021, after the company had collected six months of safety data. At that point, Pfizer would be allowed to sell its vaccine directly to hospitals and other health care providers. 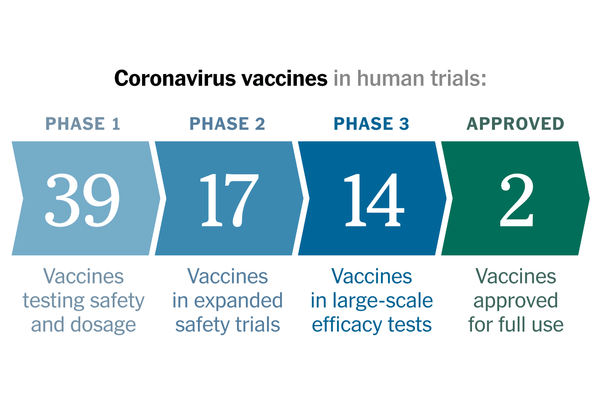