Fed up with their liberal home states, U.S. conservatives find a place they can belong in Texas | CBC Radio

Paul and Brenda Chabot believe California is no longer the land of opportunity. Born and raised in the state, the Chabots say it used to have some of the best jobs, the best schools and the safest streets in the United States.

But they say they wanted a brighter future for their four young children, so they left San Bernardino County last year for McKinney, Texas, about 50 kilometres north of Dallas.

They were renters in California, but now they have a slice of the American Dream. They own a three-quarter-acre property in a neighbourhood where parents ferry the kids around in golf carts and the lawns — ahead of Tuesday's midterm elections — are dotted with Ted Cruz signs that say, "Tough as Texas."

The Chabots didn't just relocate to Texas for family and economic reasons. They're conservatives who also left California for political reasons, and are now helping like-minded families leave blue states for red ones through their young company, Conservative Move, which operates as a referral service.

But some political scientists are concerned about people moving from one state to another so they can live alongside others who think the same way they do — it's a trend that means they never have to hear viewpoints that differ from their own and may lead to more polarization in the U.S.

"We are all refugees from California moving to Texas, and I think we all feel the same way," Paul Chabot told CBC Radio's The Current.

We are all refugees from California moving to Texas, and I think we all feel the same way. - Paul  Chabot , president and CEO of Conservative Move

"We don't leave California laughing and smiling because we have memories. We're human beings. We remember the good times of being there."

He said everything that's gone wrong with California has its roots in politics, what he sees as the liberal Democrat policies of entitlement, regulation and taxation. Chabot said it has made his home state unlivable for "middle-class families." And he said this became apparent when he made his own run for Congress in 2014 on a platform of more jobs and increased safety. 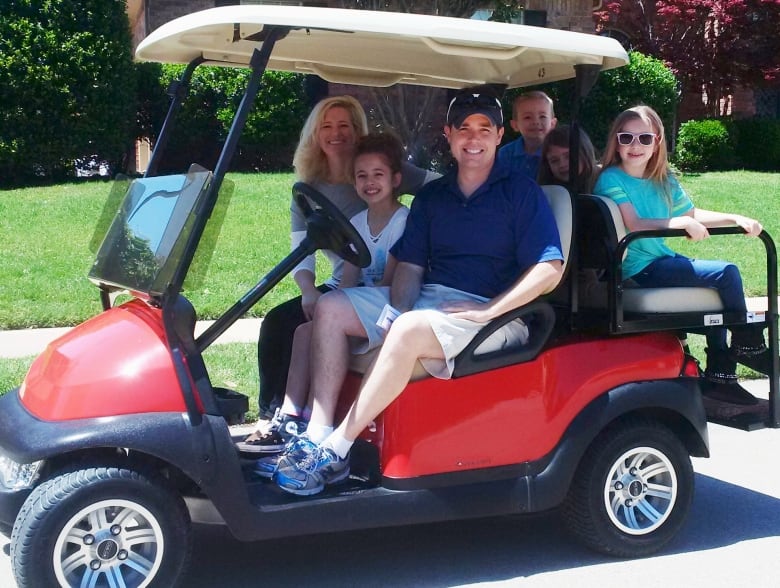 The Chabots and their children get around their neighbourhood in McKinney, Texas, in a golf cart. (Submitted by Paul Chabot)

"We were fighting on our own in California. We had no real Republican Party support. And what I realize now is most Republicans have given up on California."

In 2016, Chabot ran again on the same platform, but lost the race to a Democratic opponent who he said "ran on open borders, legalizing drugs, pro-abortion … the things that are counter to everything we believed in."

After that defeat, the couple washed their hands of California. They moved to McKinney in January 2017, and that spring founded Conservative Move, which he says has helped many families who wanted to relocate.

"It's hard to pinpoint a number — we just say thousands," Chabot said.

The top three destinations for families who work with Conservative Move are Texas, Idaho and Tennessee — but 90 per cent are going to Texas, Chabot said. While many are leaving California, others are leaving New York, New Jersey, Washington, Oregon, Massachusetts, Utah and Maryland.

"So most people are coming here, but there are still a lot of other really great states that offer the same benefits as Texas. It's just that Texas is really popular," Chabot said.

Conservative Move receives on average 25 per cent of the three-per-cent commission that its network of real estate agents earn from the sale or purchase of their clients' homes.

Derek Baker is one of the Texas agents in this network, and said the business is "rescuing families."

"We want to rescue people from blue states that can no longer afford to live there," said Baker, an eighth-generation Texan, wearing a Glock 43 on his belt. He said he always keeps a copy of the U.S. Constitution on him.

Baker said the vast majority of people who contact Conservative Move have had it with their home states. "Their frustration level is really high."

That was certainly the case for Kurtis Ward, 26, of Long Beach, Calif. 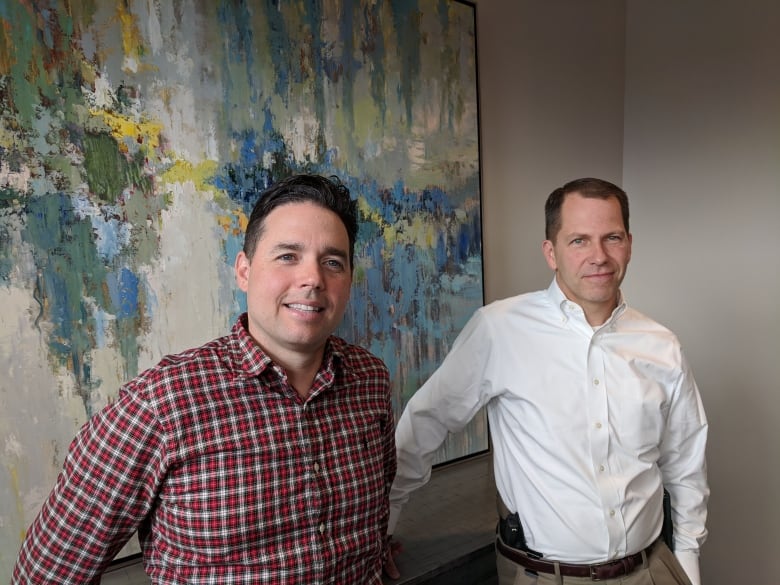 Ward had heard Chabot on John and Ken, a conservative talk radio show in the Los Angeles County area. It was enough for him to hop on a plane to meet Chabot and Baker, who showed him and his wife the surrounding areas of McKinney in north Texas.

Ward said he was frustrated by his long commutes, high gas prices and the expensive rents in Long Beach, where he was paying $1,600 US a month for a tiny apartment. He said homeless people would rummage through his trash cans at night, while people living in RVs would dump sewage out in the street.

"Just all these little things that kept adding up, and I was just done," said Ward, who moved to McKinney about a year ago and works at an accounting firm. "And I was paying for politicians' salaries that did not express my point of view, or didn't even want to listen to anybody else's point of view. So that's kind of why we said, 'Forget it. I'm done.'"

The couple also moved to Texas because they wanted to start a family and didn't want to raise children in California. They bought a 3,000-square-foot house with a pool for $300,000, a home that would have cost $1 million in California.

"Crime is very, very low [in McKinney]. I haven't seen a homeless person. Gas is cheap. I don't pay any state income tax, and everybody out here is conservative," said Ward, who has a Ted Cruz sign on his front lawn.

"It feels amazing. There's really no words to describe it," he said. "It's a lot different than renting. It feels like home." 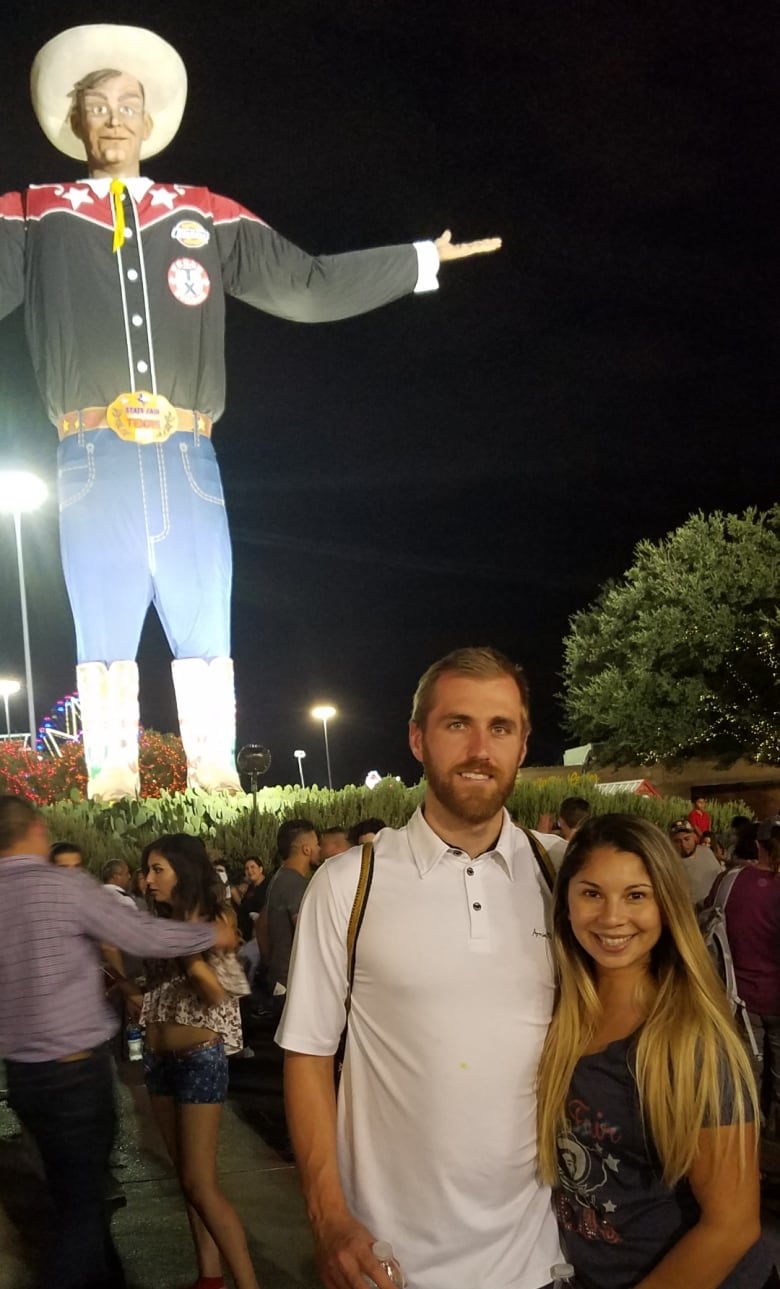 Kurtis Ward and his wife are pictured at the Texas state fair in front of 'Big Tex.' (Submitted by Kurtis Ward)

James Gimpel, a professor at the University of Maryland, has published research that found when people relocate, they do show some tendency to move to a politically compatible area.

Gimpel said in the history of migration, politics has not been at the top of relocation criteria. It's usually more about family and jobs.

"It's been mostly economic. It's, 'Where can I find work?' And it still is, I think, largely economic," he said. "But recently we seem to be seeing politics surface. And I guess that's because people are looking for a place where they can belong."

But he shares the concern that was the focus of Bill Bishop's 2008 book The Big Sort, which posits that by sorting people into red and blue enclaves, they cut themselves off from opposing viewpoints, and that their own views become more extreme.

"And we wind up then socializing with people who are only like us. And we reinforce that not only by our housing choices, but by going to restaurants where only other red people are located, and going to churches where only red people worship."

"When you divide people up like that, going forward their views tend to become more and more extreme, as opposed to having a more mixed environment, where you might actually encounter people with opposing views, which will kind of moderate your own."

Written by Showwei Chu with files from Jonathan Ore. Produced by Geoff Turner.