After four years of incredibly rancorous discourse about whether the US President was illegitimately elected with the help of foreign interference, it should surprise no one that the 2020 presidential election is mired in similar claims of illegitimacy. This time around, the people calling foul play aren't blaming Russians for the outcome: they're blaming good old fashioned election fraud of the kind that put 63 people in Chicago behind bars following the 1982 presidential election. Or the 2018 fraud in North Carolina's 9th congressional district that caused the election result to be thrown out.

But proven cases of election fraud are a lot rarer than vague allegations. Since the election, there have been a lot of vague allegations of election fraud being thrown around on social media. And like most politically motivated claims on social media, they have been widely signal-boosted without much attempt to demonstrate if they're true or not. I saw a lot of these, and some of them actually had data sources attached to them. Being a software engineer at a data-sharing startup, I got curious. I decided to dig into a specific claim and see for myself if there might be any truth to it.

Publication day update: I saw another claim about Pennsylvania's mail-in ballots this morning, and checked it out. Unlike the first claim, this one is corroborated by the data provided by the Pennsylvania Department of State. Skip to this update.

Too many elderly voters in Pennsylvania?

On Friday night, I saw this (since-deleted) tweet being shared, already having collected several hundred retweets and likes.

This person claims to have analyzed data on mail ballots published by the Pennsylvania Department of State, and found that over a million people over the age of 85 had returned mail-in ballots in that state. Since there are only about 230 thousand people that old in Pennsylvania, that certainly sounds fishy! So let's get to the bottom of this. I downloaded the PA ballot data as a CSV file and got to work.

Importing the data into Dolt

Dolt is Git for Data. It's a SQL database that you can branch, merge, clone, fork, push and pull, just like files in Git. It also comes with a built-in SQL engine to run queries against the data that you store in it. The query I wanted to write was very simple:

But to write that query, I had to import the data first. Anyone who has ever worked with data knows this is much harder than it should be.

To start, I had to give the data a primary key, which is currently required by Dolt (although we're working on fixing that). The easiest way to do this was with a quick and dirty perl script:

The script just puts an incrementing integer ID onto the front of every row in the CSV file it's given. I ran it like so:

This gives me a schema that Dolt can import. To automate its creation, I tried to use the dolt schema import command to divine it automatically, which would save me a lot of typing. Unfortunately, it thought that all the date columns were actually just strings.

This is because all the dates provided by the Pennsylvania Department of State were formatted in that peculiar American style that much of the software in the world just refuses to work with: MM/DD/YYYY. 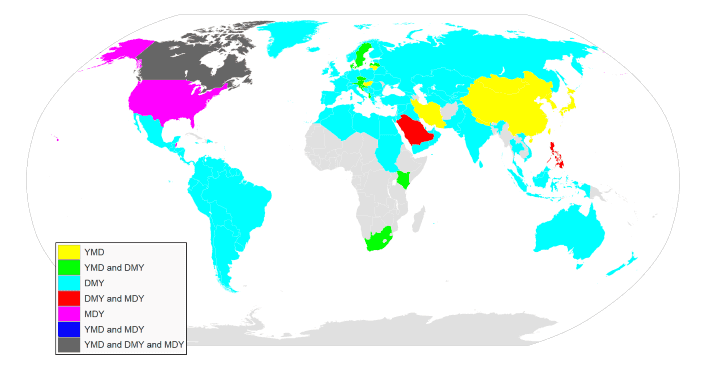 (Note that as crazy as America is in this decision, Canada manages to be even worse somehow)

But being a software engineer on the open-source project you're trying to use has its advantages: I knew right where to change the code to make the date processing logic more forgiving. I also filed an issue to fix this for everybody.

With those changes, my import finally completed successfully.

Finally, I could run my query!

Conclusion: the dead didn't steal the election in Pennsylvania

So it turns out: a million extremely elderly people did not return mail-in ballots in Pennsylvania. About 126,000 did. This is a turnout of around 50% for this age bracket, totally plausible (and actually kind of low for this year). 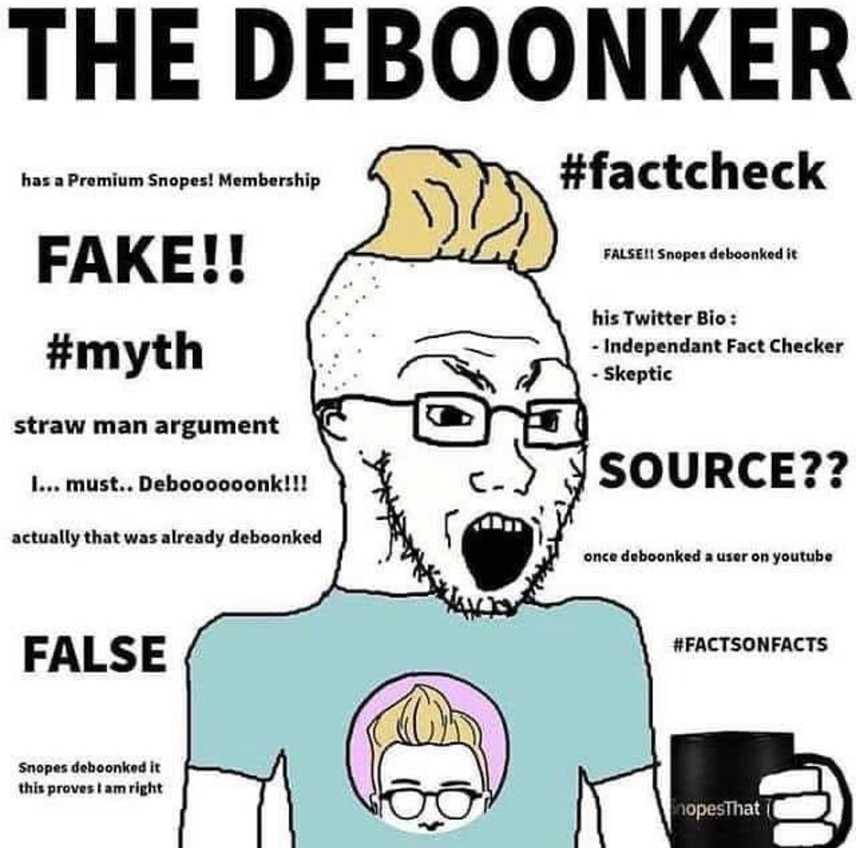 So what gives? It's easy to come up with explanations for why so many people accepted this wild claim at face value. But what about the person propagating it? Were they simply lying?

I don't think so. The tweet has since been deleted so I can't demonstrate it, but the poster seemed sincere in his analysis. He just got it wrong. And from what I could tell, a big reason he got it wrong is that he used Excel to import and analyze a 446MB, 3 million row CSV file. 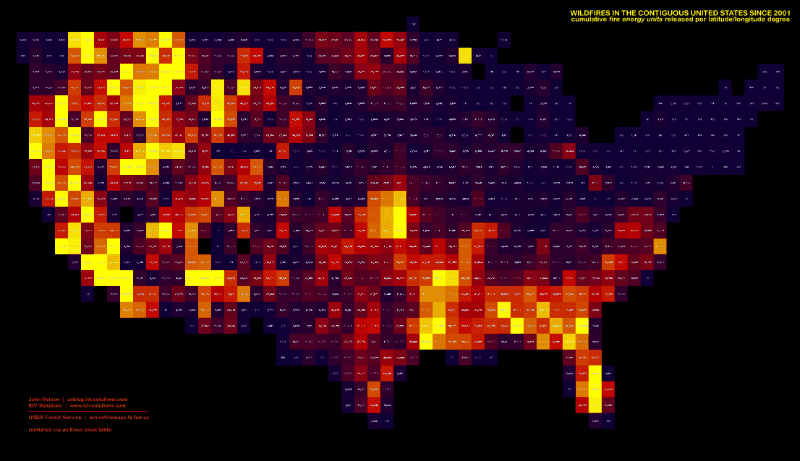 Excel is an amazing piece of software, and it's responsible for a truly mind-boggling fraction of business and data analysis workloads. But it has grown into these roles in a very haphazard and at times reluctant fashion. When you throw certain kinds or magnitudes of data at it, like a half gigabyte of text with 3 million rows, it doesn't always work right.

Or, maybe I don't know what I'm talking about and it did work right! Maybe the guy just sorted the spreadsheet by date of birth, it worked perfectly, and he read the row number wrong. But my claim is that it doesn't actually matter. The point is that we can never know, because the analysis he performed is not reproducible or sharable. It's forever lost in time, like tears in the rain. 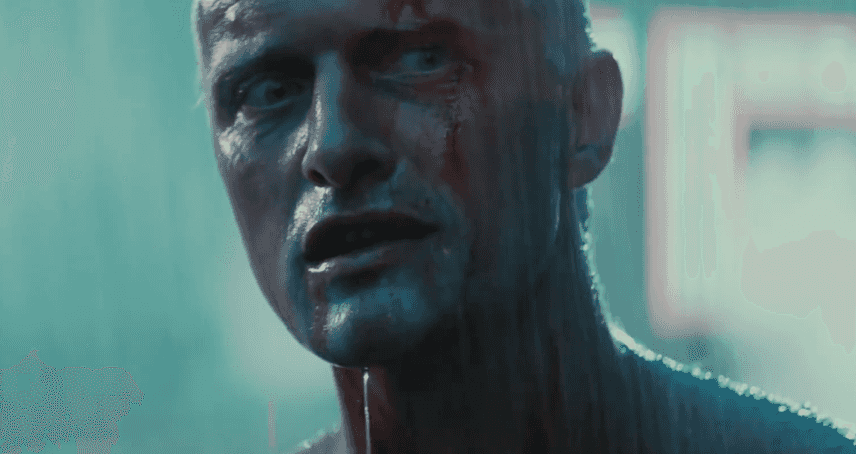 We built Dolt because we think that the way we share data on the internet is broken. We're stuck mailing zip files of CSV files around like it's 1975. And once you get one of these files, most of your work is still ahead of you. As a rule, it's not easy to import non-trivial CSV data in a usable form. Industry research indicates that professional data scientists spend nearly 80% of their time finding and cleaning datasets. Eliminate this janitorial work, and every data scientist becomes five times as effective overnight.

Imagine a world where the data from the Pennsylvania Department of State was already distributed in Dolt format. Not only is the data 1/3 the size of the uncompressed CSV file, it arrives in a fully usable form: there's no import process, no trying to figure out what the types of the columns are, whether they're nullable, etc. You just run one command:

... and you have all the data, ready to start querying immediately. If the data is updated in the future, you can get the latest copy with one more command.

If I'm a budding amateur electoral fraud analyst with a hot scoop I want to share with my 4chan Pepe buddies, I can save my analysis as a query that then travels alongside the database.

Now when my fellow election sleuths pull the database, they can verify or expand on my work with a single command:

And of course, they can view and query the data themselves on DoltHub if they're too lazy to download it.

Update: a new claim, this one corroborated

This morning I saw an additional claim about Pennsylvania's mail ballots: many of them were apparently registered as having been returned on the same day they were mailed out to the voter, or earlier in some cases. 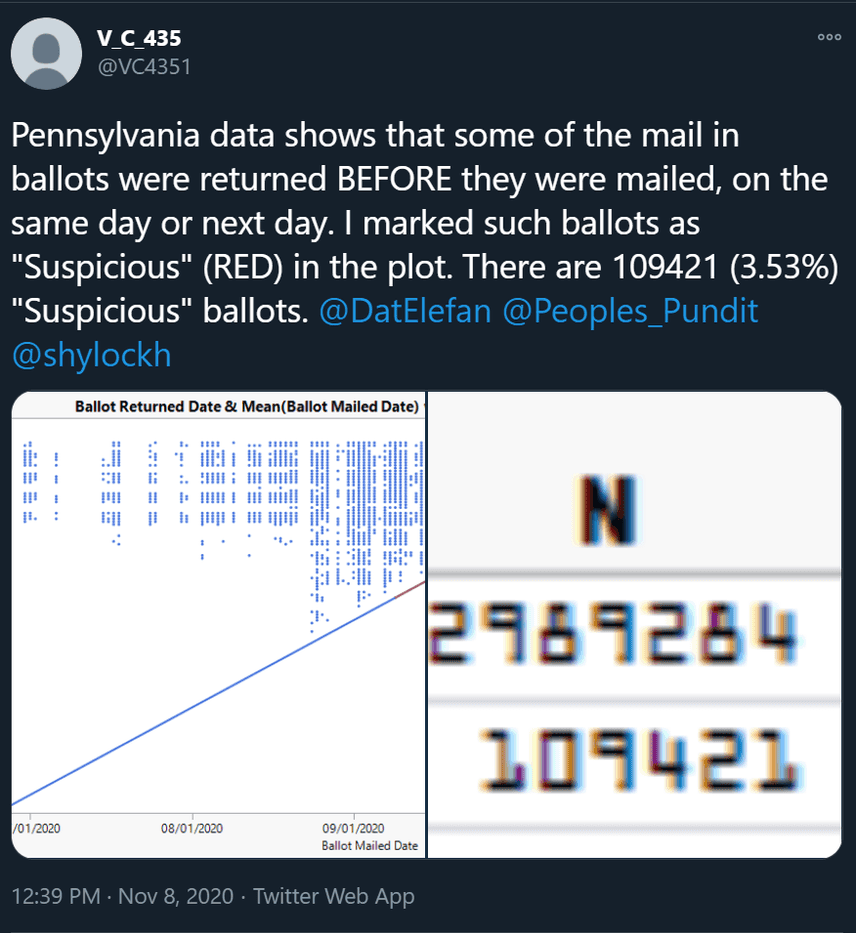 Unlike the previous claim, this one actually seems to have some merit. About 23,000 ballots in Pennsylvania are reported to have been returned before they were mailed to the voter:

It's possible there's a totally benign explanation for this pattern in the data. But unlike the previous claim, this one is corroborated by the official government data and can't be immediately dismissed.

In any case, I've updated the DoltHub repository with these two new analysis queries, and you can download the database to run them yourself.

In today's fractured information landscape, it's more important than ever to be able to quickly share data about controversial claims. The tools that we have for doing that today are abysmal. They're slow, difficult to use, easy to mess up, tough to reproduce, and awkward or impossible to share and collaborate on. We built Dolt because we thought a better way to share data is possible. We think Dolt is the answer. Give it a try and see if you agree.

To run the example queries in this blog article yourself, you can clone the dataset from DoltHub here.

If you aren't ready to download the tool or just want to ask questions, come chat with us on Discord. We're always happy to hear from new customers!