NEW ORLEANS — Hurricane Zeta lashed the Louisiana coast on Wednesday with heavy rainfall and powerful winds that officials feared could pulverize parts of New Orleans as the storm made landfall with Category 2 strength.

“It’s coming fast, it’s coming strong,” Mayor LaToya Cantrell warned residents. She acknowledged that several storms had New Orleans in their projected paths this season only to shift before landfall, but this time, she said, the city would take a hit.

Zeta, which was responsible for at least one death, is the fifth major storm to hit Louisiana this year, coming as yet another blow late in a long and punishing hurricane season that has wrought billions of dollars in devastation in the state and left many residents worn out.

Officials urged residents not to let their guard down as the storm gained strength before landfall and stood to barrage the coast with life-threatening storm surge and strafe the region with dangerous winds. 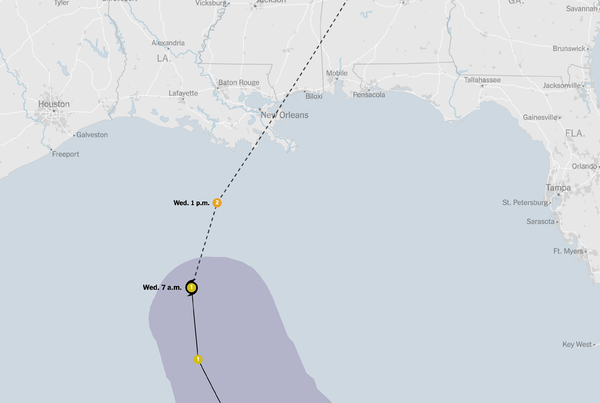 Hurricane Zeta is expected to make landfall in the United States Wednesday.

After making landfall near the fishing village of Cocodrie, La., around 4 p.m. local time, the storm quickly moved northeast through New Orleans and along the Mississippi coast, knocking out power to more than 500,000 people in Louisiana alone.

High winds had ripped the roofs off some homes, and local news outlets showed videos of power lines toppled across the region. Ms. Cantrell said during a Wednesday night news conference that a man had been electrocuted by touching a live wire.

Kevin Gilmore, a meteorologist with the National Weather Service in Louisiana, said the service had received “many reports” of tree damage and structural damage, though the extent of the impact remained unclear.

The storm was projected to move northeast through New Orleans, and a second landfall was expected late Wednesday in Mississippi, according to a National Hurricane Center forecast.

A hurricane warning was in effect for a stretch of coast from Morgan City, La., to the Mississippi-Alabama border. Forecasters predicted that the storm surge could reach as high as eight feet in some places and that Zeta could dump as much as six inches of rain.

But the dominant concern raised by officials and forecasters was the wind, which was whipping through as fast as 110 miles per hour as the storm progressed toward New Orleans. “We think this is going to be a pretty gusty storm,” said Robbie Berg, a hurricane specialist at the National Hurricane Center in Miami.

Forecasters said that Zeta was sweeping through at a brisk pace, advancing at 20 miles per hour or faster. “It’s going to be quick but it’s going to be brutal,” said Collin Arnold, director of the New Orleans Office of Homeland Security and Emergency Preparedness, noting the likelihood of widespread power outages and physical damage.

Still, the swift pace did bring a small consolation. Researchers have found that climate change has made hurricanes wetter and potentially slower, and many in the region are familiar with the impact of a sluggish storm parking itself and unloading torrents of rain.

“It’s not going to sit there and pound for hour after hour,” Gov. John Bel Edwards of Louisiana said in a briefing on Wednesday. “It should move through the area relatively quickly.”

Zeta, which hit the northern Yucatán Peninsula of Mexico on Monday and Tuesday, is the 27th named storm in an Atlantic cyclone season so busy that forecasters have run through the alphabet of names and are now working their way through Greek letters. (After Zeta comes Eta, Theta and Iota.)

Louisiana has been subjected to the some of the worst of the season. The state has been hobbled by a series of storms, including Cristobal in June, Marco in August, Sally and Beta in September, and Delta this month.

Hurricane Laura, which made landfall in the southwest corner of the state in August, was one of the most powerful storms to ever hit Louisiana. Some places, like communities in and around Lake Charles and in Cameron Parish, were still in the early stages of their recovery from Laura when Delta made landfall just weeks later.

More than 3,600 people remain in shelters after those two storms, officials said, with many of them staying in hotels in New Orleans or Baton Rouge and now finding themselves once again contending with a hurricane.

Zeta is breaking records because of where it is happening. Matt Lanza, a meteorologist and managing editor of Space City Weather, said it was the strongest storm on record so far west in the Gulf this late in the season. “I’ve been kind of flabbergasted watching this today,” he said. “This feels really weird.”

There had been some worry that it would be tough to mobilize residents beleaguered by a brutal season or, particularly in New Orleans, complacent after repeated threats from storms that never quite materialized.

But as Zeta strengthened in the final hours before landfall, the warnings started to resonate. In New Orleans especially, memories of past devastation remained seared in the minds of many. Virginia Felton could not help but drift back to Hurricane Katrina 15 years ago.

“It’s scary, way scary,” Ms. Felton, 39, said as she shopped in a packed supermarket near the French Quarter where checkout lines spanned the length of the building and snaked into the produce section in the front of the store.

The city of New Orleans sent regular warnings to residents via text message on Wednesday. And officials took a variety of precautions in anticipation of a deluge.

The Lower Mississippi River was closed to vessels at 2 a.m. Wednesday; the Port of New Orleans was also closed. Flood-protection crews were closing the gates that prevent storm surge from entering the city’s network of drainage canals. City buses stopped running at noon.

Many residents who live near the coast in areas unprotected by levees fled to higher ground; other stalwarts living in raised houses were weathering the storm at home, already aware that the storm surge would push several feet of water into their streets and communities before receding.

On every freeway entering New Orleans, bucket trucks from utility companies were swarming in, carrying line workers who will start restoring power lines as soon as the storm passes.

And the city’s grassy street medians, called neutral grounds, were suddenly empty after being packed in recent weeks with clusters of colorful campaign signs in the final days before the presidential election. In many places, they had been taken over by cars parked by owners looking to spare their vehicles from potential street flooding.

Some residents were still taking the storm in stride.

Whitecaps were visible on Lake Pontchartrain under gray skies on Wednesday, but Henry Gordon, 41, was putting shrimp on a fishing hook and casting his line. “The fish are going to run with the currents,” he said, and those currents, he contended, were going to push saltwater and trout, redfish, croaker and drum in large numbers from the Gulf of Mexico into Lake Pontchartrain — and onto his line.

“We’re going to be all right,” he said. “Everybody’s got natural disasters to deal with. If we were somewhere else, we might have tornadoes or nor’easters or earthquakes. We’re in the South, so we have hurricanes.”

As a light rain fell, Zé da Luz, 65, stood outside her neighbor’s house in New Orleans’s Ninth Ward. She worried that the fast-moving storm could be too much for the city’s drainage system.

“We’ll have street flooding for sure,” Ms. da Luz said. But she was still planning to ride out Zeta at home, cooking a big batch of stewed okra and shrimp on a gas stove that will work even if power fails.