Phillis Wheatley, also spelled Phyllis and Wheatly (c. 1753 – December 5, 1784) was the first published African-American female poet.[1][2] Born in West Africa, she was sold into slavery at the age of seven or eight and transported to North America. She was purchased by the Wheatley family of Boston, who taught her to read and write and encouraged her poetry when they saw her talent.

The publication of her Poems on Various Subjects, Religious and Moral on 1 September 1773 brought her fame both in England and the American colonies. Figures such as George Washington praised her work.[3] During Wheatley's visit to England with her master's son, African-American poet Jupiter Hammon praised her work in his own poem. Wheatley was emancipated (set free) shortly after the publication of her book.[4] She married in about 1778. Two of her children died as infants. After her husband was imprisoned for debt in 1784, Wheatley fell into poverty and died of illness, quickly followed by the death of her surviving infant son. 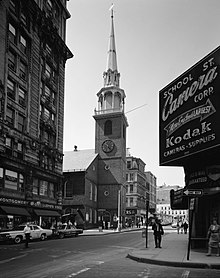 Although the date and place of her birth are not documented, scholars believe that Phillis Wheatley was born in 1753 in West Africa, most likely in present-day Gambia or Senegal.[6] Wheatley was sold by a local chief to a visiting trader, who took her to Boston in the British colony of Massachusetts, on July 11, 1761,[7] on a ship called The Phillis.[8] It was owned by Timothy Fitch and captained by Peter Gwinn.[8]

On arrival she was re-sold to the wealthy Boston merchant and tailor John Wheatley, who bought the young girl as a servant for his wife Susanna. John and Susanna Wheatley named the young girl Phillis, after the ship that had brought her to America. She was given their last name of Wheatley, as was a common custom if any surname was used for slaves.

The Wheatleys' 18-year-old daughter, Mary, first tutored Phillis in reading and writing. Their son Nathaniel also helped her. John Wheatley was known as a progressive throughout New England; his family gave Phillis an unprecedented education for an enslaved person, and for a female of any race. By the age of 12, Phillis was reading Greek and Latin classics and difficult passages from the Bible. At the age of 14, she wrote her first poem, "To the University of Cambridge, in New England."[9][10] Recognizing her literary ability, the Wheatley family supported Phillis's education and left the household labor to their other domestic slaves. The Wheatleys often showed off her abilities to friends and family. Strongly influenced by her studies of the works of Alexander Pope, John Milton, Homer, Horace and Virgil, Phillis Wheatley began to write poetry.[11]

In 1773, at the age of 20, Phillis accompanied Nathaniel Wheatley to London in part for her health, but also because Susanna believed she would have a better chance publishing her book of poems there.[12] She had an audience with the Lord Mayor of London (an audience with George III was arranged, but Phillis returned home beforehand), as well as with other significant members of British society. She was also never able to personally meet Selina Hastings, Countess of Huntingdon, who served as the patron of Wheatley's volume of poems, which was published in the summer of 1773.[13]

Phillis Wheatley wrote a letter to Reverend Samson Occom, commending him on his ideas and beliefs of how the slaves should be given their natural born rights in America. Wheatley also exchanged letters with the British philanthropist John Thornton, who in turn discussed Wheatley and her poetry in his correspondence with John Newton.[14] Along with her poetry, she was able to express her thoughts, comments and concerns to others.[15] In 1775, Phillis Wheatley sent a copy of a poem entitled, "To His Excellency, George Washington" to him. In 1776, Washington invited Wheatley to visit him at his headquarters in Cambridge, Massachusetts, which she did in March 1776.[16] Thomas Paine republished the poem in the Pennsylvania Gazette in April 1776.[17]

In 1773, sometime between July and October, Wheatley was emancipated by the Wheatley family shortly after her book, Poems on Subjects Religious and Moral, was published in London. Susanna Wheatley died in the spring of 1774. John Wheatley's death followed in 1778. Shortly after, Phillis Wheatley met and married John Peters, a free black grocer. They struggled with poor living conditions and the deaths of two babies.[18]

In 1779, Wheatley submitted a proposal for a second volume of poems, but was unable to publish it because of her financial circumstances, the loss of patrons after her emancipation (often publication of books was based on gaining subscriptions for guaranteed sales beforehand), and the Revolutionary War. However, some of her poems that were to be published in that volume were later published in pamphlets and newspapers.[19]

Her husband John Peters was improvident, and imprisoned for debt in 1784, leaving an impoverished Wheatley with a sickly infant son. She went to work as a scullery maid at a boarding house to support them, a kind of domestic labor that she had not been accustomed to, even before becoming a free person. Wheatley died on December 5, 1784, at the age of 31.[20]

In 1768, Wheatley wrote "To the King's Most Excellent Majesty," in which she praised King George III for repealing the Stamp Act.[4] As the American Revolution gained strength, Wheatley's writing turned to themes that expressed ideas of the rebellious colonists.

In 1770 Wheatley wrote a poetic tribute to the evangelist George Whitefield, which received widespread acclaim. Her poetry expressed Christian themes, and many poems were dedicated to famous figures. Over one-third consist of elegies, the remainder being on religious, classical, and abstract themes.[22] She seldom referred to her own life in her poems. One example of a poem on slavery is "On being brought from Africa to America":[23]

Twas mercy brought me from my Pagan land,
Taught my benighted soul to understand
That there's a God, that there's a Saviour too:
Once I redemption neither sought nor knew.
Some view our sable race with scornful eye,
"Their colour is a diabolic dye."
Remember, Christians, Negroes, black as Cain,
May be refin'd, and join th' angelic train.

Historians have commented on her reluctance to write about slavery. Perhaps it was because she had conflicting feelings about the institution. In the poem above, critics have said that she praises slavery because it brought her to Christianity. But, in another poem, she wrote that slavery was a cruel fate.[24] 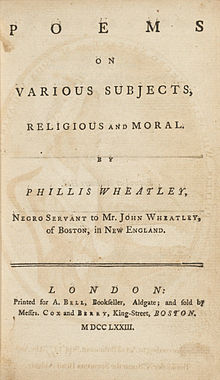 Many colonists found it difficult to believe that an African slave was writing "excellent" poetry. Wheatley had to defend her authorship of her poetry in court in 1772.[25][26] She was examined by a group of Boston luminaries, including John Erving, Reverend Charles Chauncey, John Hancock, Thomas Hutchinson, the governor of Massachusetts, and his lieutenant governor Andrew Oliver. They concluded she had written the poems ascribed to her and signed an attestation, which was included in the preface of her book of collected works: Poems on Various Subjects, Religious and Moral, published in London in 1773. Publishers in Boston had declined to publish it, but her work was of great interest in London. There, Selina, Countess of Huntingdon and the Earl of Dartmouth acted as patrons to help Wheatley gain publication. Her poetry received comment in The London Magazine In 1773, which published as a "specimen" of her work, her poem 'Hymn to the Morning', and said: "these poems display no astonishing works of genius, but when we consider them as the productions of a young, untutored African, who wrote them after six months careful study of the English language, we cannot but suppress our admiration for talents so vigorous and lively."[27]

In 1778, the African-American poet Jupiter Hammon wrote an ode to Wheatley ("An Address to Miss Phillis Wheatley"). Hammon wrote this poem while Hammon's owner, Lloyd, had temporarily moved himself and the slaves he owned to Hartford, Connecticut, during the Revolutionary War. Hammon saw Wheatley as having succumbed to what he believed were pagan influences in her writing, and so the "Address" consisted of twenty-one rhyming quatrains, each accompanied by a related Bible verse, that he thought would compel Wheatley to return to a Christian path in life.[28]

Boston-based publisher and abolitionist Isaac Knapp collected Wheatley's poetry along with that of enslaved North Carolina poet George Moses Horton in 1838 under the title Memoir and Poems of Phillis Wheatley, A Native African and a Slave. Also, Poems by a Slave.[29] The memoir was earlier published in 1834 by Geo W. Light, but did not include poems by Horton.

Style, structure, and influences on poetry

Wheatley believed that the power of poetry is immeasurable.[30] John C. Shields notes that her poetry did not simply reflect the literature that she read but was based on her personal ideas and beliefs. Shields writes, "Wheatley had more in mind than simple conformity. It will be shown later that her allusions to the sun god and to the goddess of the morn, always appearing as they do here in close association with her quest for poetic inspiration, are of central importance to her." This poem is arranged into three stanzas of four lines in iambic tetrameter followed by a concluding couplet in iambic pentameter. The rhyme scheme is ababcc.[30][31]

She used three primary elements: Christianity, classicism, and hierophantic solar worship.[32] The hierophantic solar worship is what she brought with her from Africa; the worship of sun gods is expressed as part of her African culture. As her parents were sun worshipers, it may be why she used so many different words for the sun. For instance, she uses Aurora eight times, "Apollo seven, Phoebus twelve, and Sol twice."[32] Shields believes that the word "light" is significant to her as it marks her African history, a past that she has left physically behind.[32]

He notes that Sun is a homonym for Son, and that Wheatley intended a double reference to Christ.[32] Wheatley also refers to "heav'nly muse" in two of her poems: "To a Clergy Man on the Death of his Lady" and "Isaiah LXIII," signifying her idea of the Christian deity.[33]

Shields believes that her use of classicism set her work apart from that of her contemporaries. He writes, "Wheatley's use of classicism distinguishes her work as original and unique and deserves extended treatment."[34] Shields sums up Wheatley's writing by characterizing it as "contemplative and reflective rather than brilliant and shimmering."[31]

With the 1773 publication of Wheatley's book Poems on Various Subjects, she "became the most famous African on the face of the earth."[35] Voltaire stated in a letter to a friend that Wheatley had proved that black people could write poetry. John Paul Jones asked a fellow officer to deliver some of his personal writings to "Phillis the African favorite of the Nine (muses) and Apollo."[35] She was honored by many of America's founding fathers, including George Washington, who told her that "the style and manner [of your poetry] exhibit a striking proof of your great poetical Talents."[36]