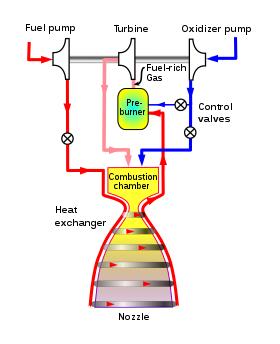 Fuel-rich staged combustion cycle. Here, all of the fuel and a portion of the oxidizer are fed through the preburner, generating fuel-rich gas. After being run through a turbine to power the pumps, the gas is injected into the combustion chamber and burned with the remaining oxidizer.

The staged combustion cycle (sometimes known as topping cycle or preburner cycle) is a power cycle of a bipropellant rocket engine. In the staged combustion cycle, propellant flows through multiple combustion chambers, and is thus combusted in stages. The main advantage relative to other rocket engine power cycles is high fuel efficiency, measured through specific impulse, while its main disadvantage is engineering complexity.

The fuel efficiency of the staged combustion cycle is in part a result of all propellant ultimately flowing to the main combustion chamber; contributing to thrust. The staged combustion cycle is sometimes referred to as closed cycle, as opposed to the gas generator, or open cycle where a portion of propellant never reaches the main combustion chamber. The engineering complexity is partly a result of the preburner exhaust of hot and highly pressurized gas which, particularly when oxidizer-rich, produces extremely harsh conditions for turbines and plumbing.

Staged combustion (Замкнутая схема) was first proposed by Alexey Isaev in 1949. The first staged combustion engine was the S1.5400 (11D33) used in the Soviet planetary rocket, designed by Melnikov, a former assistant to Isaev.[1] About the same time (1959), Nikolai Kuznetsov began work on the closed cycle engine NK-9 for Korolev's orbital ICBM, GR-1. Kuznetsov later evolved that design into the NK-15 and NK-33 engines for the unsuccessful Lunar N1 rocket. The non-cryogenic N2O4/UDMH engine RD-253 using staged combustion was developed by Valentin Glushko circa 1963 for the Proton rocket.

After the abandonment of the N-1, Kuznetsov was ordered to destroy the NK-33 technology, but instead he warehoused dozens of the engines. In the 1990s, Aerojet was contacted and eventually visited Kuznetsov's plant. Upon meeting initial skepticism about the high specific impulse and other specifications, Kuznetsov shipped an engine to the US for testing. Oxidizer-rich staged combustion had been considered by American engineers, but deemed impossible.[2] The Russian RD-180 engine also employs a staged-combustion rocket engine cycle. Lockheed Martin began purchasing the RD-180 in circa 2000 for the Atlas III and later, the V, rockets. The purchase contract was subsequently taken over by United Launch Alliance (ULA--the Boeing/Lockheed-Martin joint venture) after 2006, and ULA continues to fly the Atlas V with RD-180 engines as of 2019.

The first laboratory staged-combustion test engine in the West was built in Germany in 1963, by Ludwig Boelkow.[citation needed]

Hydrogen peroxide/kerosene powered engines such as the British Gamma of the 1950s may use a closed-cycle process by catalytically decomposing the peroxide to drive turbines before combustion with the kerosene in the combustion chamber proper. This gives the efficiency advantages of staged combustion, while avoiding major engineering problems.

The RS-25 is another example of a staged combustion engine, and the first to use liquid oxygen and liquid hydrogen.[citation needed] Its counterpart in the Soviet shuttle was the RD-0120, similar in specific impulse, thrust, and chamber pressure specification to the RS-25, but with some differences that reduced complexity and cost at the expense of increased engine weight.

Oxidizer-rich turbine exhaust from a SpaceX Raptor preburner shown during a 2015 sub-system test on a test stand at Stennis Space Center. In the full-flow rocket engine, the preburner exhaust is fed into a turbine and then into the main combustion chamber.

In addition to the propellant turbopumps, staged combustion engines often require smaller boost pumps to prevent both preburner backflow and turbopump cavitation. For example, the RD-180 and RS-25 use boost pumps driven by tap-off and expander cycles, as well as pressurized tanks, to incrementally increase propellant pressure prior to entering the preburner.

Benefits of the full-flow staged combustion cycle include turbines that run cooler and at lower pressure, due to increased mass flow, leading to a longer engine life and higher reliability. As an example, up to 25 flights were anticipated for an engine design studied by the DLR (German Aerospace Center) in the frame of the SpaceLiner project,[3] up to 1000 flights are expected for Raptor from SpaceX.[5] Further, the full-flow cycle eliminates the need for an interpropellant turbine seal normally required to separate oxidizer-rich gas from the fuel turbopump or fuel-rich gas from the oxidizer turbopump,[6] thus improving reliability.

As of 2019, only three full-flow staged combustion rocket engines had ever progressed sufficiently to be tested on test stands; the Soviet Energomash RD-270 project in the 1960s, the US government-funded Aerojet Rocketdyne Integrated powerhead demonstration project in the mid-2000s,[6] and SpaceX's flight capable Raptor engine first test-fired in February 2019.[7]

The first flight test of a full-flow staged-combustion engine occurred on 25 July 2019 when SpaceX flew their Raptor methalox FFSC engine at their South Texas Launch Site.[8] 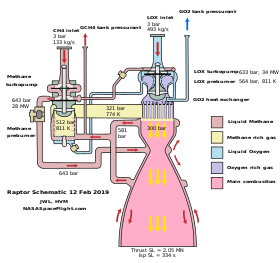