Pedicabo ego vos et irrumabo ("I will sodomize you and face-fuck you") is the first line, sometimes used as a title, of Carmen 16 in the collected poems of Gaius Valerius Catullus (c. 84 BC – c. 54 BC). The poem, written in a hendecasyllabic (11-syllable) meter, was considered so explicit that a full English translation was not published until the late twentieth century.[1] The first line has been called "one of the filthiest expressions ever written in Latin—or in any other language, for that matter."[2]

Carmen 16 is significant in literary history as an artistic work censored for its obscenity, but also because the poem raises questions about the proper relation of the poet, or his life, to the work.[3] Later Latin poets referenced the poem not for its invective, but as a justification for subject matter that challenged the prevailing decorum or moral orthodoxy. Ovid,[4] Pliny the Younger,[5] Martial,[6] and Apuleius[7] all evoked the authority of Catullus in asserting that while the poet should be a respectable person, his work should not be constrained or restricted.[8]

Several editions of Catullus' works omit the more explicit parts of the poem. A noteworthy example is the 1924 Loeb edition: this omits lines 1 and 2 from the English translation, but includes them in the Latin; lines 7-14 are omitted from both Latin and English; a later Loeb edition[9] gives the complete text in both languages. Other editions have been published with the explicit words blanked out.[10]

NPR bleep censored the first line of Catullus 16, both in Latin and English translation in the radiophonic exchange between Guy Raz and Mary Beard in 2009.[11] C. H. Sisson writes "the obscenity of Catullus has long been a stumbling block". He follows Loeb, omitting poem lines as non sequitur:

because it seems to me that the poem is better without them (the last eight lines). In the shorter version, Catullus is making a point (as always): the additional lines are probably spurious. It is unlike Catullus to exalt the pornographic quality of what he wrote; his mind was too much on his subject.[8]

In the sense that this is the normal language of those to whom he directs the poem, it is not obscene. Obscenity, like beauty, is in the eyes of the beholder.[8] 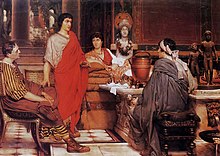 The poem raises questions about the proper relation of the poet, or his life, to the work.[3][12] Catullus addresses the poem to two men, Furius and Aurelius. Furius refers to Marcus Furius Bibaculus, a first-century poet who had an affair with Juventius, Catullus' lover. Aurelius refers to Marcus Aurelius Cotta Maximus Messalinus, a first-century consul, or senator, during the Julio-Claudian dynasty.[13][14][15]

Those two men either together or singly also appear in so called Catullus' Furius and Aurelius "cycle", in poems 11, 15, 21, 23, 24 and 26. The cycle considers sexual themes and with the exception of Catullus 11 uses an abusive language toward the two.[16] The two are described elsewhere as fellow members of Catullus' cohort of friends: comites Catulli.[12] According to Catullus 16, Furius and Aurelius find Catullus's verses to be molliculi ("tender" or "delicate"), implicating that the author is an effeminate poet.[16] According to T. P. Wiseman, Catullus speaks about himself in feminine terms even in his love poetry. Catullus's gentle attitude left him vulnerable in the cynical and cruel environment of Roman high society.[17] The criticism of Furius and Aurelius was directed at Catullus 5, apparently from "many thousands of kisses" at line 12. Kenneth Quinn observes:

16.12 comes closest to the words of Poem 5, especially at 5.10. Comparing these two lines makes it extremely tempting to ascribe the reference to Poem 5 and to Poem 5 alone, especially since this assumption explains neatly the accusation, defense, and counter-accusation of Poem 16.[8]

Catullus maligns the two and threatens them with rape.[12] According to T. P. Wiseman, Catullus used the obscenity to get his message that "soft" poetry could be more arousing than explicit description to "sensibilities so much cruder than his own".[17] According to Thomas Nelson Winter, Catullus could still claim that he has a pure life (79.16), despite the self evidence of pederasty (poems 14, 109) with and his love of a married woman (poem 83 mentions Lesbia's husband).

Apparently Catullus and his contemporaries believed a man could do almost anything sexually and remain respectable, so long as he stayed within the masculine role. Thus Catullus’ insistence on his own propriety and on his potent manhood is all one. Catullus is a proper man.[8]

Craig Arthur Williams says Catullus 16 demonstrates that in Roman ideology of masculine vir, a man is not compromised by his penetration of other males, in fact his manhood status is bolstered.[18] Mary Beard finds the poem's message to be ironic:[3]

You can't tell a man from his verses. And 'pedicabo ego vos et irrumabo' for saying you can. But the joke is (or rather one of the jokes in this complicated little poem)—if you can't infer from his kiss-y verses that [Catullus] is effeminate, then neither can you infer from his poetic threats of violent penetration that he is capable of that either.