Six months ago, on a sunny spring day in LA, I donned a suit—a rare event—and walked into a courtroom at UCLA. With me were Robert Miranda, a 24 year old entrepreneur who runs an Xbox and smartphone repair shop in the desert town of Barstow, California, and Matt Zieminski, one of the better iPhone repair technicians in the world.

We were there to petition for the freedom to tinker. There’s an obscure aspect of copyright law that is being abused by big manufacturers to take away our ability to fix things. In 2001, Sina Khanifar, a young entrepreneur, was sued by a cell phone manufacturer citing section 1201 of the DMCA, the Digital Millennium Copyright Act.

Simply stated, 1201 makes it illegal to ‘circumvent’ locks put on products by the manufacturer without permission. It shifts control of our products from us, the owners, to the original makers of the equipment. This law has been a significant contributor to the steady erosion of ownership rights.

Fortunately, Congress built an escape hatch into section 1201, allowing citizens to petition for exemptions to the extraordinarily broad law. So, every three years, someone has to go and ask for the right to tinker with our stuff. I’m that someone—that’s why I was in LA. 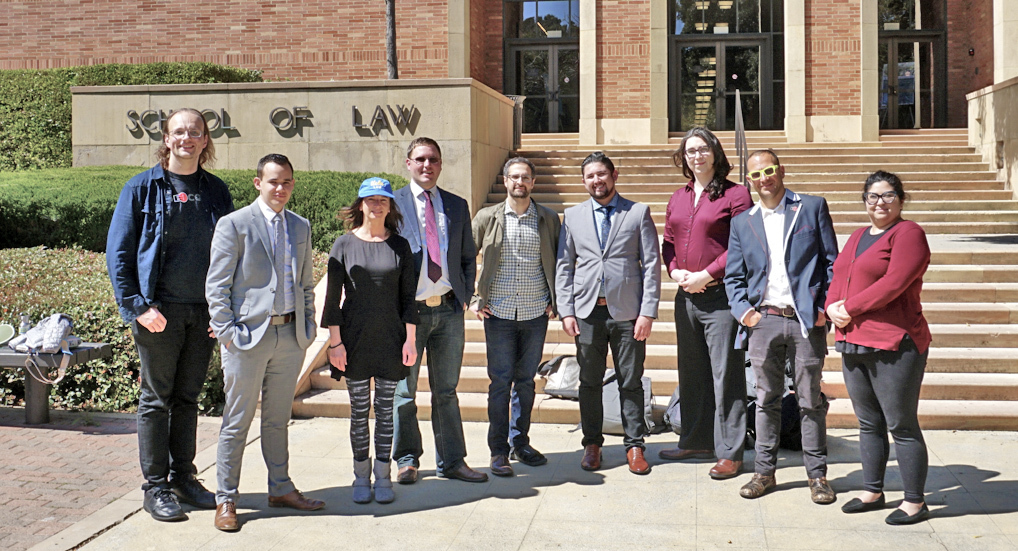 On behalf of the iFixit community, I came to ask for permission to circumvent digital locks in order to fix our stuff. Fortunately, I wasn’t alone. Along with Robert and Matt representing Repair.org, I was joined by Cynthia Replogle, iFixit’s rockstar lawyer. And Cory Doctorow, Kit Walsh, and Mitch Stoltz from the Electronic Frontier Foundation, as well as Jay ‘Saurik’ Freeman of Cydia iPhone jailbreaking fame. We also had help from Jef Pearlman and his team of students from Stanford’s IP law clinic. Our allies were met with opposition from a variety of moneyed and acronymed interests—the MPAA, RIAA, and the Auto Alliance, to name a few.

Over three full days in LA, we were grilled by the Copyright Office. They wanted details on how cell phone baseband processors work, how automotive telematics systems are different from OBD II diagnostics, why you can’t simply swap in a new Blu-ray drive into an Xbox, and so forth. It was exhausting—for us and for them. But they had done their homework, and asked intelligent questions on a startling variety of topics.

The final ruling was released today, along with 342 pages of background. Our work, and that of our allies, was cited extensively. The Copyright Office clearly understands the frustration that the repair community is experiencing. In the introduction to their ruling, they include this quote, “[i]t’s my own damn car, I paid for it, I should be able to repair it or have the person of my choice do it for me.”

Unlike past rulings, this goes into effect immediately. Well, almost immediately. The new rules are the law of the land as of this Sunday, October 28. So let’s break it down, and talk about what’s illegal today that will be kosher come Sunday. (Oh, and here’s the decision from 2015 for comparison.)

The ruling was not without some bad news:

We are going to continue to have trouble making repair options available for Xbox and Playstation optical drives because they’re cryptographically programmed at the factory. We asked for the ability to pair a replacement drive with an existing console. But the Copyright Office declined, stating that ‘in many cases, manufacturer repair services will be widely available and adequate.’ On behalf of gamers in rural communities around the country, I respectfully disagree.

You may find this hard to believe, but one major point of discussion at the hearing was whether letting people repair cars and tractors would allow them to pirate music and movies using the vehicle’s entertainment systems. In their 2015 filing, John Deere speculated that farmers might pirate Taylor Swift music using their equipment. Fortunately, the Copyright Office saw through that argument:

This Ruling is not a Panacea

With those few exceptions, the Copyright Office went as far as they could in granting access to the repair community. There are still significant limits, though, that will need to be addressed by Congress.

One of those being the law against ‘trafficking’ in circumvention tools. From today’s filing, “limiting the exemption to individual owners threatens to render it effectively meaningless for those who lack the technical knowledge to access and manipulate increasingly complex embedded computer systems.” Now that circumvention is required to perform repairs, and most repairs benefit from tools, we need to open up a market for developing and selling those tools. Legislation like Congresswoman Zoe Lofgren’s Unlocking Technology Act would provide the clarity that tool developers need. It would also be helpful for service providers to codify the ability of third-parties to perform service.

Nowadays, just about everything has software. Your ability to fix and maintain the products you own is contingent on being able to modify that software. But our tooling hasn’t kept up. For fear of prosecution, farmers and independent mechanics haven’t developed their own software tools to maintain their equipment. Now, they can.

This ruling doesn’t make that tooling available to the public—we’re going to need actual Right to Repair legislation for that. But it does make it legal to make your own tools. And that’s a huge step in the right direction.

This is a sweeping victory. It’s the result of years of careful, painstakingly detailed work by the community. So pop a celebratory bottle, or maybe pop open a piece of household hardware this Sunday—we did it!

For those of you that want to put on your amatuer-lawyer hat, here’s the full text of the exemptions that are relevant to hardware tinkerers:

(6) Computer programs that enable smartphones and portable all-purpose mobile computing devices to execute lawfully obtained software applications, where circumvention is accomplished for the sole purpose of enabling interoperability of such applications with computer programs on the smartphone or device, or to permit removal of software from the smartphone or device. For purposes of this paragraph (b)(6), a “portable all-purpose mobile computing device” is a device that is primarily designed to run a wide variety of programs rather than for consumption of a particular type of media content, is equipped with an operating system primarily designed for mobile use, and is intended to be carried or worn by an individual.

(8) Computer programs that enable voice assistant devices to execute lawfully obtained software applications, where circumvention is accomplished for the sole purpose of enabling interoperability of such applications with computer programs on the device, or to permit removal of software from the device, and is not accomplished for the purpose of gaining unauthorized access to other copyrighted works. For purposes of this paragraph (b)(8), a “voice assistant device” is a device that is primarily designed to run a wide variety of programs rather than for consumption of a particular type of media content, is designed to take user input primarily by voice, and is designed to be installed in a home or office.

(9) Computer programs that are contained in and control the functioning of a lawfully acquired motorized land vehicle such as a personal automobile, commercial vehicle, or mechanized agricultural vehicle, except for programs accessed through a separate subscription service, when circumvention is a necessary step to allow the diagnosis, repair, or lawful modification of a vehicle function, where such circumvention does not constitute a violation of applicable law, including without limitation regulations promulgated by the Department of Transportation or the Environmental Protection Agency, and is not accomplished for the purpose of gaining unauthorized access to other copyrighted works.

(10) Computer programs that are contained in and control the functioning of a lawfully acquired smartphone or home appliance or home system, such as a refrigerator, thermostat, HVAC, or electrical system, when circumvention is a necessary step to allow the diagnosis, maintenance, or repair of such a device or system, and is not accomplished for the purpose of gaining access to other copyrighted works. For purposes of this paragraph (b)(10):

(14) Computer programs that operate 3D printers that employ microchip- reliant technological measures to limit the use of feedstock, when circumvention is accomplished solely for the purpose of using alternative feedstock and not for the purpose of accessing design software, design files, or proprietary data.