BANGKOK — Haresa counted the days by the moon, waxing and waning over the Bay of Bengal and the Andaman Sea. Her days on the trawler, crammed into a space so tight that she could not even stretch her legs, bled into weeks, the weeks into months.

“People struggled like they were fish flopping around,” Ms. Haresa, 18, said of the other refugees on the boat. “Then they stopped moving.”

Dozens of bodies were thrown overboard, some beaten and some starved, survivors said. Ms. Haresa’s aunt died, then her brother.

Six full moons after she boarded the fishing boat in Bangladesh with hopes that human traffickers would ferry her to Malaysia for an arranged marriage, Ms. Haresa, who goes by one name, and almost 300 other Rohingya refugees found sanctuary in Indonesia last month. Her sister, 21, died two days after the boat landed.

Banished from their homes in Myanmar and crammed into refugee settlements in neighboring Bangladesh, thousands of Rohingya have taken the perilous boat crossing to Malaysia, where many from the persecuted minority group toil as undocumented workers. Hundreds have died along the way.

Most of those now undertaking the trip, like Ms. Haresa, are girls and young women from refugee camps in Bangladesh whose parents have promised them in marriage to Rohingya men in Malaysia. Two-thirds of those who landed in Indonesia last month with Ms. Haresa were female. 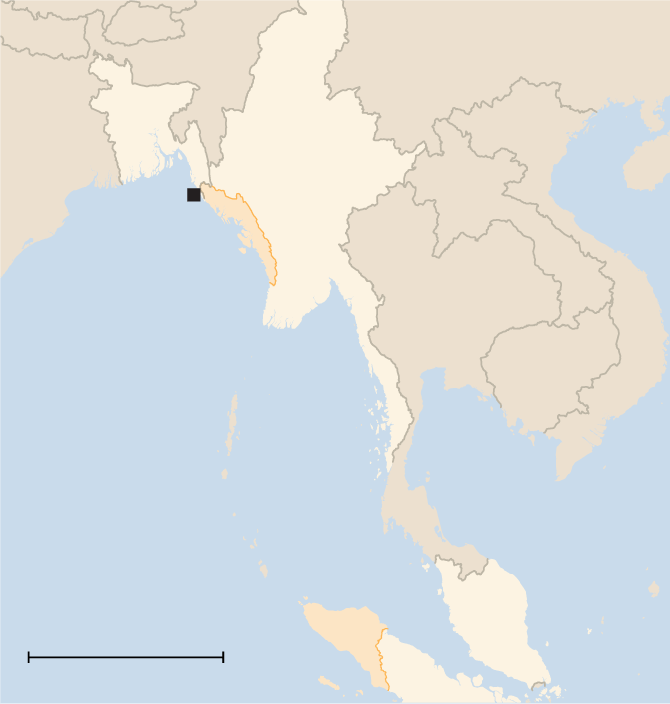 “My parents are getting old and my brothers are with their own families,” she said. “How long are my parents going to bear the burden of me?”

Through the matchmaking of a cousin in Malaysia who works as a grass-cutter, Ms. Bibi’s parents found a fiancé for her. She asked for details about the man but none were provided, apart from his name, she said.

After surviving more than six months at sea in a failed attempt to reach him, Ms. Bibi spoke from Indonesia with her fiancé a country away. The phone call lasted two minutes. “He sounded young,” she said. That is the extent of what she knows about him.

Ms. Bibi initially told staff from the United Nations refugee agency that she was 15 years old, but later amended her age to 18. Child marriage is common among the Rohingya, especially in rural populations.

Mostly stateless, the Muslim minority has been subjected to an apartheidlike existence in Buddhist-majority Myanmar. Over the past few years, waves of pogroms have pushed the Rohingya across the border to Bangladesh, where human traffickers prey on the young and desperate in the refugee camps, along with their families.

The flow of people has surged since 2017, when more than three-quarters of a million Rohingya fled an ethnic cleansing campaign in Myanmar. With the coronavirus pandemic tightening borders, the journey by sea has gotten even more difficult. For months this year, boats laden with hundreds of Rohingya migrants drifted at sea, unable to find a safe haven. The authorities in Thailand and Malaysia repeatedly pushed them away.

Fishermen in Aceh, on the tip of the Indonesian island of Sumatra, are among the few who have welcomed the Rohingya. A battered trawler with around 100 refugees landed in June, followed by the larger boat on Sept. 7.

“The question is how Southeast Asia as a region responds to this humanitarian crisis on its doorstep,” said Indrika Ratwatte, the director for Asia and the Pacific for the United Nations refugee agency.

The Bangladeshi government, struggling with its own vulnerable population amid the pandemic, has threatened to relocate thousands of Rohingya from the camps to a cyclone-prone islet in the Bay of Bengal. The silty island was uninhabited until the Bangladeshi Navy forced about 300 Rohingya — many of them women and children — to shelter there this summer, when their attempt to sail to Malaysia ended after months at sea.

Earlier this month, several Rohingya died in clashes between different gangs in the Kutupalong refugee camp in Bangladesh, which is considered the largest settlement of refugees in the world. Some women say they venture out as little as possible to use public latrines for fear of sexual violence.

Shamsun Nahar, 17, said she was desperate to leave the camps, even though she had heard the stories of how dangerous the crossing could be. Her father, a cleric, found her a match, a man from the same village in Rakhine who is working as a carpenter in Malaysia.

“I talked to him on a video call, and I liked him from every angle,” Ms. Nahar said of their brief courtship by phone. “He was not too big, not too small. He looked good.”

Her fiancé was to pay $4,500 for her passage, Ms. Nahar said. The spot she occupied for months on the boat was near the engine, so noisy that she could not hear others’ voices.

The smugglers and brokers, both Rohingya Muslims and ethnic Rakhine Buddhists, beat them with plastic pipes, she said. Food was served on a plastic sheet smeared with remnants from the previous weeks, shrouding every meal with a putrid smell.

“I am safe now, but I am separated from my family and my fiancé,” Ms. Nahar said after arriving in Indonesia last month. “What will happen next? I do not know.”

Although previous waves of Rohingya who landed in Indonesia have mostly made their way to Malaysia, only a few from this year’s crossings have been able to unite with their families or future husbands.

When Naemot Shah married his wife, Majuma Bibi, he was 14 and she was 12. The roofs of their childhood houses in Rakhine touched, he said, as close as could be.

In 2014, Mr. Shah paid human smugglers to take him from Rakhine to Malaysia, a 28-day journey that nearly killed him, he said. His daughter was only six months old when he left. Three years later, his family fled to Bangladesh after the Myanmar military’s campaign of killings, rapes and forced displacement against the Rohingya.

From a refugee camp in Bangladesh, Mr. Shah’s wife pleaded with him to pay for her and their daughter to join him in Malaysia. Knowing how risky the trip was, he refused.

But his wife, whom Mr. Shah described as “very clever,” quietly saved the money that he sent her from his job as a construction worker. In late March, she and her daughter boarded a fishing trawler bound, they hoped, for where her husband lived.

“I was very upset that they went without my permission,” Mr. Shah said.

As news of mass drownings reached him, he assumed his family had died at sea. But in June, Mr. Shah, 24, heard that a boat had landed in Indonesia. Scanning the crowds on a video, he recognized his wife and daughter.

“I never felt such happiness as the day I found out they were alive,” Mr. Shah said.

Other Rohingya in Malaysia have taken second or third wives, he said. But he will not. Instead, he traveled to Indonesia to reunite with his wife and daughter. “I will stick to one wife,” Mr. Shah said. “She traveled all this way, suffered this difficult time, for me.”