Tesla released its third quarter financial results today and they delivered a profit for the first time in years.

It’s mainly thanks to many improvements to the Model 3 program, which not only became the best-selling car in the US in terms of revenue, but it is also becoming quite profitable.

We already expected that Tesla’s revenue would skyrocket this quarter thanks to the Model 3 ramp up resulting in 56,065 deliveries during the last quarter.

You add Model S and Model X deliveries to that amount and Tesla delivered an incredible 83,775 vehicles in Q3.

It resulted in record automotive revenue of more than $6 billion.

They released the following impressive charts to illustrate the significance of this achievement: 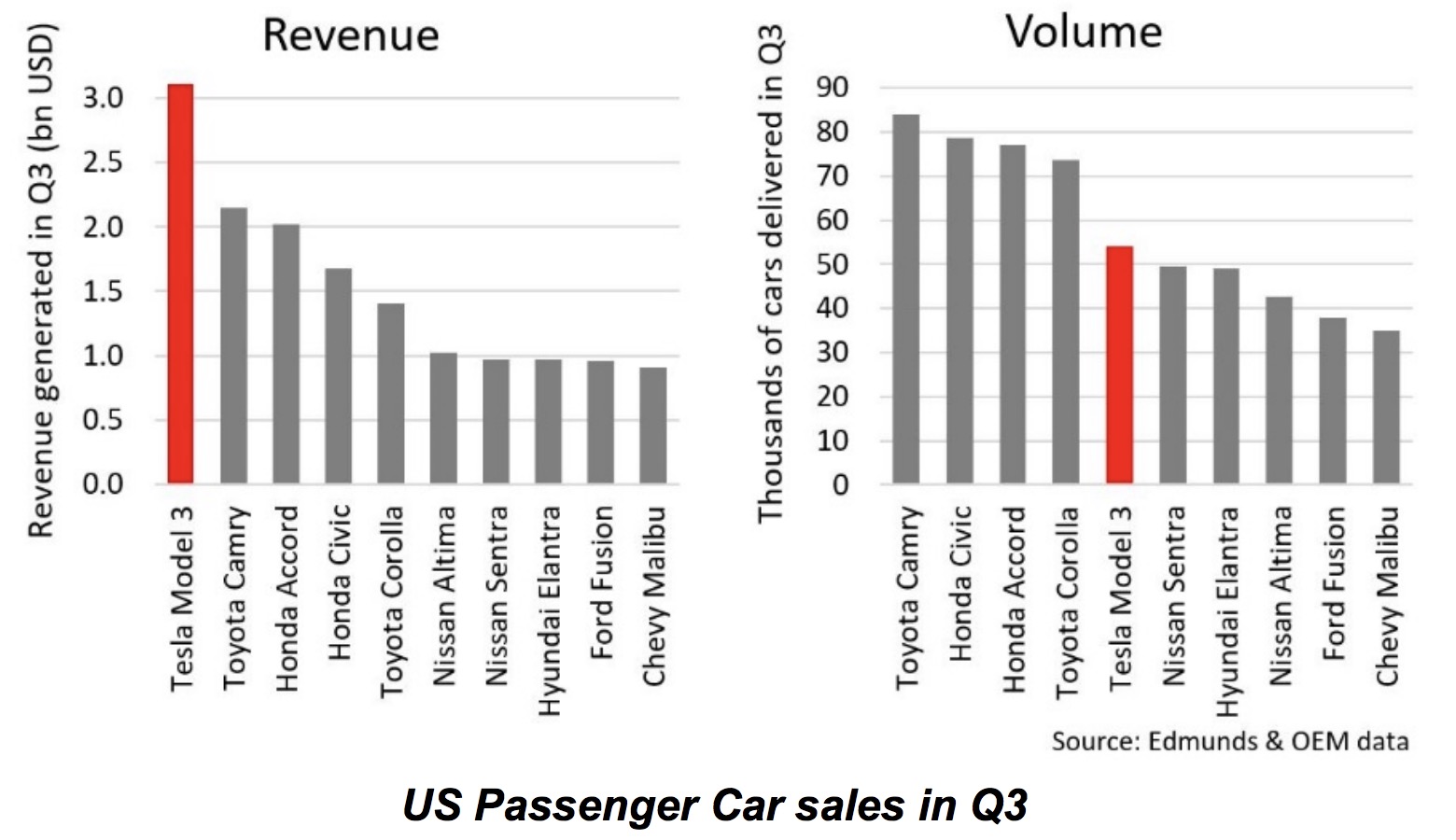 That’s incredible for any kind of vehicle program and even more so for an electric vehicle that has been in production for about a year.

But what is even more surprising is that Tesla turned a profit of $312 million ($516 million non-GAAP) during the quarter.

That’s more money that Tesla has ever made since the automaker has consistently been reporting losses as it attempted to ramp up production.

Most analysts were guiding slight loses for the quarter but even those who expected profits didn’t envision those kinds of income over the last 3 months.

The discrepancy can be attributed to Tesla increasing the gross margin on the Model 3 much faster than most people anticipated.

The automaker only had a 5% gross margin during the second quarter and it guided 15% for the third quarter, which most analysts thought would be difficult to achieve.

Yet, Tesla actually delivered over 20% in gross margin for the Model 3.

They achieved that through two different approaches.

First off, the average price of Model 3 went up during the quarter because of the higher mix of all-wheel drive vehicles:

The Model 3 production system stabilized in Q3. We went from a steep S-curve to more gradual monthly improvements. Among other things, we made the changes necessary to enable production of an All-Wheel Drive (AWD) version of Model 3, and we did this without disrupting our production rate. We started the quarter producing only Rear Wheel Drive (RWD) Model 3s and ended the quarter producing almost entirely AWD cars. Even though AWD cars are significantly more complex to build, we produced 5,300 Model 3s in the last week of Q3.

But Tesla also says that it made Model 3 production significantly more efficient throughout the quarter.

The automaker claims that labor hours went down by more than 30% in just 3 months:

“Labor hours per Model 3 decreased by more than 30% from Q2 to Q3, falling for the first time below the level for Model S and X.”

The company says that it expects the cost to continue to improve in Q4 while they also continue to increase the Model 3 production rate.

I suspected a significant increase in gross margin during the quarter, but I am still surprised by the numbers.

I thought that the lower volume might indicate that Tesla is focusing on production efficiency instead of quantity and sure enough they did.

But I still didn’t expect a 30% reduction in labor hour.

This quarter is an incredible achievement from Tesla. The gross margin is also a good indicator that Tesla will surely be able to soon deliver on the $35,000.

Model 3 is now an undoubtedly a really successful vehicle program and it has yet to go worldwide.