42 is a private, nonprofit and tuition-free computer programming school created and funded by French billionaire Xavier Niel (founder of the telecommunication company Illiad) with several partners including Nicolas Sadirac (previous director-general of the Epitech school in France),[1] Kwame Yamgnane and Florian Bucher (former executives of Epitech).[2] The school was first opened in Paris in 2013.

Out of more than 80,000 candidates in France, 3,000[3] were selected to complete a four-week intensive computer programming bootcamp called piscine (swimming-pool). Any person between 18 and 30 can be registered for piscine after completing the logical reasoning tests on the website.

The school is a non-profit organization and is entirely free, being funded by billionaire Xavier Niel with hundreds of millions of dollars. All the intellectual property belongs to the students. 42 Silicon Valley is the American campus of 42 chartered as a public-benefit nonprofit corporation in the State of California and has been created and funded by the same team from France, in addition to a new partner, the chief operating officer of the American school and former 42 Paris student Brittany Bir.[4] 42 Silicon Valley opened in summer 2016 in Fremont, California in the San Francisco Bay Area.

42's name is a reference to the science fiction book The Hitchhiker's Guide to the Galaxy written by British author Douglas Adams: in the book 42 is the Answer to the Ultimate Question of Life, the Universe, and Everything.

In addition to the two official campuses in Paris, France and Fremont, California, the school model was adopted in Lyon, France, as well as in Romania, South Africa, Ukraine, Bulgaria, Moldova,[5] Belgium, Russia and Morocco[6] with the help and support of 42.

French entrepreneur and businessman Xavier Niel who created and funded 42

Students who passed the first 'Piscines' started training in November 2013.

In an Editorial,[7] Xavier Niel introduced 42, linking the need for it to the state of the French Education.

"Today, the French system doesn't work. It is stuck between the first place University, which provides training that is not fitting with what the business world needs but is free and accessible to the largest number. Public universities on the other hand are highly selective and admit only people with scientific or techno-logic training/experience and finally Private universities are expensive and have a qualitative formation but do not encourage a number of different talents."

Students who passed the first 'Piscines' started training in November 2016.

Logo of 42 Silicon Valley, the American campus of the school

The 42 Silicon Valley location is located at 6600 Dumbarton Circle, in Fremont, California.[9] The building was acquired from DeVry University. The campus is approximately 200,000 sq ft.

This campus has 300 spaces in the dormitories (titled "Nostromo Dorms," located at 34793 Ardentech Court, Fremont, CA 94555) which are completely free of cost.[8] Like the Paris campus, 42 Silicon Valley was designed by AR architectures.[10]

42 France is located at 96 Boulevard Bessières, in the 17th arrondissement of Paris.[11] The building was acquired from the State in 2011 for 12.6 million euros. The building extends over an area of 4242 square meters. Pictures of the school architecture are visible on the official website. 42 was designed by IN&EDIT Architecture agency.[12]

There are no tuition fees for the entirety of the program. All the running costs for the 10 first years have been personally funded by Xavier Niel a French entrepreneur and philanthropist who founded the French company Iliad.[13] The 42 Silicon Valley campus also has free dorms for those who are the most in need.

The selection process begins by taking a few online memory and logic tests, which are intended to evaluate an individual's capacity to learn computer programming.

After this there is a second selection which is called the "Piscine" which is an intensive programming session in C programming language which takes place over a period of 4 weeks.

42 does not have lectures or practical work supervised by teachers. Students carry out projects proposed by the pedagogic team, and are free to organise their own time.

The schools are open 24/7. Students help each other and use the Internet for their projects.

Students have no time limits in which to complete their projects. They validate the projects by correcting each other's work. Validation of a project increases the level of the students, allowing them to unlock new and more difficult challenges.

During their time at the school, students have to undertake internships. To qualify for an internship a student must have validated a certain number of projects and passed five exams.

Many entrepreneurs hold conferences at the school. 42 school has also forged partnerships with other schools (business schools, design schools etc.) and the hackathon organisation. Students are able to participate in partnership activities if they wish to.

After the "Piscine", training lasts at least three years, and covers the different I.T. jobs linked to development.

The beginning of the program is mainly focused on the Unix development environment with the C-language. These software developments are planned through 40 projects such as the implementation of a basic First-person shooter engine, an engine for an online game and a 3D rendering engine (rasterizer) by ray tracing.

After that there are a lot of other languages students will see like PHP, C++, OCAML and many others. Some projects can also have free language choice.

According to a promotional document about the school program, learning software development is planned through the realization of an arcade game, artificial intelligence or a computer virus.

42 students and people from everywhere in the world can create a new project if they want. 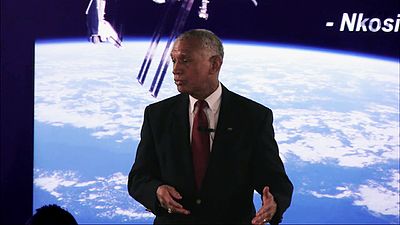 Charles F. Bolden from NASA at 42

Endorsement in the video for the introduction of the 42 Silicon Valley campus in Fremont, California:

Personalities who came at a 42 Campus for a conference or a visit:

Other schools stress educational methodologies such as peer-learning, whereby students are encouraged to assist one-another and self-organize, and project-based learning which favors longer-term, open-ended assignments.

WeThinkCode[15] (South Africa - created in 2016): WeThinkCode is a new kind of tech incubator dedicated to eliminate the IT skills gap. WeThinkCode's mission is to source and train Africa's future coding talent. Based on the 42 school programs.

ACADEMY+PLUS[16] (Romania - created in 2014): ACADEMY + PLUS has a completely innovative approach on education: working on projects, peer-learning, the results are measurable, it is practically encourage teamwork. a two-year program. The curriculum structure and payment model largely resemble Make university's. Based on the 42 school programs.

ACADEMY+MOLDOVA[17] (Moldova - created in 2016): Academy+Moldova is an alternative and free IT school, launched by Foundation IT Moldova in partnership with the Academy+Plus Cluj-Napoca and Ecole 42 Paris.

UNIT Factory[18] (Kyiv, Ukraine - created in 2016): UNIT Factory is an innovative institution which was created as a joint project of Vasily Khmelnytsky's fund entitled as "K.Fund" and 42 (school) which is supported by public institution "Osvitoriya".

CODAM[21] (Amsterdam, The Netherlands - created in 2018): CODAM is the initiative of Corinne Vigreux, an entrepreneur who co–founded TomTom and has always been passionate about technology, innovation and social mobility. Codam builds on the pioneering work of Ecole 42 in Paris.

21[23] (Moscow, Russia - created in 2018): School 21 is launched by Sberbank of Russia and currently accepting applications. The very first piscine (swimming-pool) is going to start in the end of August. Education is free and lasts from 1.5 to 4 years.[24]